An Argument Against Deforestation and Its Effects

“80% of the planet's original forests are gone” (Annie Leonard).

eforestation or slash and burn is the act of “cleaning up” the forests, but consequently, it is only damaging the land. Without the beautiful rain forests, our lives are being slowly diminished each day. As agriculture is important to farmers and even us, these individuals it is the cause of this horrific act. On the other hand, Mother Nature sometimes is the cause of this because of wildfires.

Don’t waste time
Get a verified writer to help you with An Argument Against Deforestation and Its Effects
Hire writer
$35.80 for a 2-page paper

However, slash and burn techniques could result in completely diminishing forests in the next hundred years. Destroying the forests is not only affecting the trees and us humans, but the homes of tons of living species. Deforestation does not have any benefits, except for the agriculture aspect, but that is done through a harmful slash and burn effect, which is resulting in the terminating of the lives of humans, animals and living plants, along with destroying natural forests.

Deforestation is using a harmful slash and burn technique that is creating serious problems.

Colin Stief, a geographer, explains, “Slash and burn agriculture is the process of cutting down the vegetation in a particular plot of land, setting fire to the remaining foliage, and using the ashes to provide nutrients to the soil for use of planting food crops" (3). For this process, they commit this horrific act in the quickest way possible, then allow it to sit for an extended period of time to watch nature grow back again (Stief 3).

Numerous problems arise through this effect, one that includes a crucial distress to the world: the permanent loss of forest areas.

Annie Leonard, an advocate for sustainability and the creator of the film "The Story of Stuff", asserted, “In the Amazon alone, we're losing 2000 trees a minute. That is seven football fields a minute.” Different techniques that can be done for the slash and burn, but all result in the same damage and permanence to the area. The thought process behind this is to be able to survive, where it is performed on farming lands by farmers who are looking for means to support themselves, along with their families, on the farming land. Slash and burn agriculture is simple, yet completed in a complex way.

The first step is prepping the fields, next, safeguarding the foliage to make sure it is dry, following with the actual destroying or otherwise known as burning of the vegetation where it keeps away the vermin and gives nutrients for growth. Lastly, the planting is put into place where the burning occurred (Stief 3). The act continues on until it becomes infertile and the process begins again that results in the complete loss of vegetation that leads to other environmental problems. Humans, animals, and plants are being destroyed through the clearing of forests. The regions that are affected the most by deforestation are central Africa, northern South America, and Southeast Asia where there is green surrounding, with grass and rainforests (Stief 3).

If one imagines, how many different species are living in these forests, the numbers are shocking. Brian Parham, a writer for National Geographic's website mentions that "seventy percent of Earth's land animals and plants live in forests” (2). That number is decreasing because most animals cannot survive a disaster, where they lose everything, including their home. These trees provide a source of protection towards the living life in and around there. When taken down, the temperature of the forest swings and creates an unbalanced lifestyle for the species, where most cannot survive. The trees keep those bright rays away, while at night holds in any warmth there is (Munita 7).

Indigenous people reside in these areas that are being cut down where they are stripped of anything they have left. According to a website Pachamama Alliance, "The governments of nations with rainforests in their borders also attempt to evict indigenous tribes." (“Effects”6). It is an instant effect on the way they live because they are dependent on those resources that are being destroyed. Animals and plants are living organisms that have to endure such a tragedy due to selfish needs of humans. As natural forests are diminishing, along with the living life, deforestation has a dramatic effect on water, climate change, and global warming. In today's world, there should be a maintained balance in the water cycle and that is usually maintained through the trees. “With fewer trees left, due to deforestation, there is less water in the air to be returned to the soil” (Pachamama).

Without water, it leads back to the other effects of interfering with the lives of humans and animals. Rhett Butler depicts the root of the problem, “ 80% of deforestation comes from small-scale agriculture and cattle ranching” (1). As for climate change, the soils are usually wet, but with no protection they dry out and becomes ineffective. The most important effect this destroying of trees has is global warming. Without the shield up, more greenhouse gases are able to swarm in, which increases how quick and severe it will bring global warming upon us. "Presently, the tropical rainforests of South America are responsible for 20% of Earth's oxygen and they are disappearing at a rate of 4 hectares a decade” (Pachamama, 1). They are all interconnected with one another; when one occurs, the other is usually right behind. Deforestation is clearing the land of trees where later it is often used for agriculture that does not pertain to the forest in any way. Slash and burn agriculture is effective for farmers, but with that comes damage.

Animals and plants have to endure the suffering for no apparent reason, just that they happen to live in those areas that have been their homes for years. A cost accompanies this practice that is hurting our water cycle, the climate and increasing global warming. If deforestation continues, there will be nothing left to take. Nevertheless, there are solutions that are waiting to be taken into consideration to stop this harmful act of destruction. It is critical we discover the resolution to keeping humans and the wildlife safe through this whole process of deforestation. The problem started way before anyone can remember, back to when people started to first roam the Earth.

As for modern time, “The United Nations Food and Agriculture Organization (FAO) estimates that the annual rate of deforestation is about 1.3 million square km per decade” (Pimm). The problem is prevalent, whether we are a part of it or not, but it needs to be attacked head on. To begin growing from this damaging action of deforestation, the solution starts among the people and works its way up to the people in power. In time, the only way to save all the forests and create a healthy life style for the living is to create harsher laws and regulations by pushing the government to do their job, reforestation or and an alternate way may be eco-forestry or community forestry.

The problem is that the government has laws that protect the forest, but the bigger issue is why are they looking past them. There are three that are known for their safety of the forests which are the Lacey act, the Wilderness act, and the Endangered Species Act. The Lacey Act is an old law that was passed in the 1900s that debarred bringing any prohibited wildlife into the United States (U.S. Lacey Act). Following, there was the Wilderness Act that was passed in 1964 and realized that the “wilderness is an area where the earth and its community of life are untrammeled by man, where man himself is a visitor who does not remain." Lastly, there is the Endangered Species Act that was passed in 1973, that protects the living and their habitat if they are endangered” (National Park Service). The problem that remains even after these clear and concise laws is the leaders of our country and this department are looking past the problem.
A simple solution starts with another law put into place, the “zero deforestation” or “zero net deforestation" policy, which are for companies and can drastically reduce the number of lost trees. “Zero deforestation means no forest areas are cleared or converted, while zero net deforestation allows for the clearance or conversion of forests in one area as long as an equal area is replanted elsewhere" (Lake and Baer). Another that follows is electing the right people into power. It follows with passionate people who are determined to act in such a manner that depicts equality and justice to preserve the forests and crack down on the exploitation that lies within these laws.

Finally, the most obvious solution that remains is simply replanting the trees back that have been destroyed or burned down, otherwise known as reforestation. On the website Earth Eclipse, it mentions in an article, “It requires an ongoing process and should not be viewed as a onetime thing” (7 Fantastic Solutions to Deforestation). For some, attending to the forest day after day may even create a bigger problem than before. If that is the case, there is eco-forestry, which can be defined as the forestry that emphasizes holistic practices which strive to protect and restore ecosystems rather than maximize economic productivity. It forces the people to actually prepare the land, do some research and gain knowledge on a certain area before taking it all down. It also chooses the correct trees, rather than blindly doing it in a slash and burn technique.

In today's world, it may be inevitable that deforestation occurs, but with the actions above and a peaceful, safe way there can be less loss for the lives of humans, animals, and plants. Deforestation has been occurring before people even knew it and the problem is still being dismissed in 2017. We are the only people here left to help and it starts with us and leads it way throughout others. Through verbal words, the government can listen to us and start enforcing the laws they put into place. Planting back all the trees that have gone before us is the most caring thing a person can do. The Earth needs us and we need to prevent the future from acquiring this act that is seen as "normal" or inevitable. Saving the forests lies in our hands, now we must take action.

An Argument Against Deforestation and Its Effects. (2021, Oct 31). Retrieved from http://envrexperts.com/free-essays/essay-about-argument-against-deforestation-and-its-effects 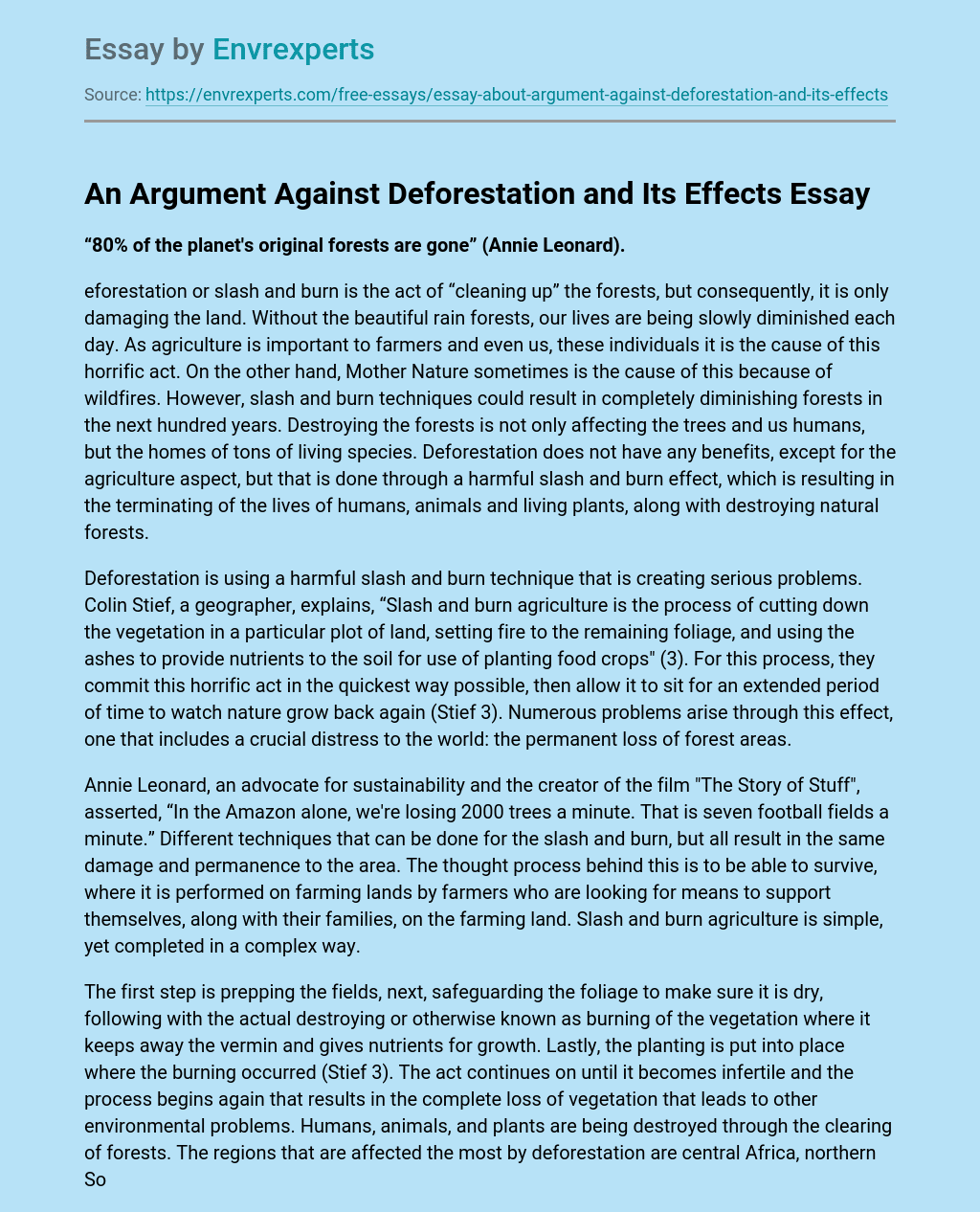