Assistance to Africa From Various Organizations

The shortest distance between Africa and Europe is less than nine miles of ocean. However, the connotations associated with both continents are drastically different. For decades, NGO and Aid organizations have been portraying Africa as badly as possible with the intentions of garnering sympathy to receive donations. However, those descriptions can be disadvantageous to Africans despite the good intentions. Imagery is a use of figurative language to represent an object’s actions and ideas through figurative and metaphorical language.

The technique is used in many NGO and Aid organization texts to support a pathos, or emotional, rhetorical appeal.

Don’t waste time
Get a verified writer to help you with Assistance to Africa From Various Organizations
Hire writer
$35.80 for a 2-page paper

Africa is misportrayed as filled with poverty and hunger by NGO and Aid organizations, influencing the Western world to view African people as not properly educated, combative, and unable to grow economically; ultimately building a monolithic story of a distressed continent that misplaces meaningful aid given by first world citizens.

NGO and Aid organizations promote imagery of insufficient schools in different African countries, leaving people in first world countries to believe that there are very few schools in Africa and that most people in the continent are uneducated.

For example, Build Africa is an organization that focuses on building safe schools in Kenya and Uganda that posts facts such as how 35 million elementary age children are out of school in sub-saharan Africa (Education to End Poverty).

Secondly, the fact that they chose to use is completely irrelevant to the page it was on. They are focusing on building safe schools for children already in school, not all of the uneducated children in sub-saharan Africa and the Africans will appear like they are misusing specific aid that was not actually given to them. To add on, a 2019 newsletter by Build a School in Africa includes photos of ruined schools and newly built ones replacing them surrounded by wilderness in Mali (2019 Newsletter).

The photos of the schools before Build a School in Africa rebuilt them are of the schools in really rural areas in Mali, yet without background knowledge someone might think that the rest of the schools in Mali would be just as poor. In addition, the imagery of . Thirdly, a tab on Trans-Afrika’s web page labeled Urgent Appeal tells the story of a village where a friend of the author lived that was burned to the ground due to violence. Their call to action is to donate so that schools can be better equipped, which would reduce ignorance and violence (An Appeal for Direct Aid to a Village in Africa). The article is using assertion propaganda when they say that by donating to them, there will be less violence because there would be more education, influencing the reader to believe that Africa’s violence stems from their lack of education.

In addition, when the schools do not have basic learning materials and the organization claims that the learning materials will have such drastic effects, the original learning environment is portrayed as one that doesn’t teach enough, which could be incorrect for that school and the schools in the area. NGO and Aid organizations constantly broadcast violence in Africa with the purpose to garner sympathies to receive donations, misportraying common daily life in Africa and Africans to be viewed as obsessed with fighting.

To explain, a Human Rights Watch article articulates that “Burundi plunged into a widespread political, human rights, and humanitarian crisis when President Pierre Nkurunziza announced his decision to run for a controversial third term in 2015, triggering widespread protests” (Ensure Repatriations Are Voluntary). Name Calling propaganda misportrayed the country as only a place of unjust political instances and implies that the political injustice is the only thing that Burundi is.

Additionally, the article supports the idea that Africans are infatuated with violence by articulating how Tanzania, who was housing refugees from Burundi, was driving them back to their home country and not doing anything to resolve the conflict. Furthermore, an article published by Amnesty International depicts that people throughout Africa have challenged African leadership in the past year against their abuses of human rights (Africa: Armed Conflicts and State Repression Fuel Cocktail of Human Rights Violations).

Moreover, an article published by CARE describes Cecile and nearly 400,000 other people who escaped the Democratic Republic of Congo due to violence and how she, through CARE, helps other women to not feel crestfallen anymore (Bridger). Any efforts put into donations will only go into solving the effects of the problem, not the problem itself because CARE is helping the victims and not aiding the cause of the problem. In addition, the repetition of CARE news broadcasting violence in Africa obscures the fact that there are places in Africa that are not characterized by violence.

NGO and Aid organizations focusing mainly on grief and disaster in Africa to gain donations influences businesses to view Africans as poor, and discourages specific monetary assistance to Africa that will help it grow economically. As a matter of fact, an article published by Doctors Without Borders headlined Ebola Outbreak Democratic Republic of Congo: March 2020 Crisis Update reflects on 27 people killed in two days and how Ebola help was suspended (Bianchi). Because trade across overseas is so time consuming, articles such as the one above are discouraging to businesses that are looking to expand into Africa because they do not desire setbacks.

Additionally, the article makes the Democratic Republic of Congo appear unable to receive aid and shines the area in a bad light. In addition, an article published by the Red Cross describes how “thousands of people remain in a precarious situation, vulnerable to extreme weather that has been hitting the region” (Mozambique: Thousands Remain Vulnerable to Recurrent Disasters One Year on from Cyclone Idai).

The article creates imagery of a multitude of people that need immediate help, but when 1.8 million people were affected by the cyclone, thousands is a small percentage. Unfortunately, the title can make the region look worse off than it is. Secondly, Africa has an abundance of natural resources and a growing workforce that provide excellent reasons to invest in it’s economy that can better benefit Africa in the long term (Bajpai), yet these are not focused on because of the attention given to the NGO and Aid organizations.

Another instance occurs when “I was told by several NGOs and UN agencies that the report was too positive,” said an official when reporting Somalia’s crop harvest in 2010 (Rothmyer). NGOs know that the worse condition Africa appears to be in, the more money they will likely receive, but a good crop harvest would be an excellent way to attract businesses. In addition, intentionally obscuring Somalia’s economy misportrayed Somalia to be worse-off than it really is to the first-world.

Assistance to Africa From Various Organizations. (2021, Oct 31). Retrieved from http://envrexperts.com/free-essays/essay-about-assistance-africa-various-organizations 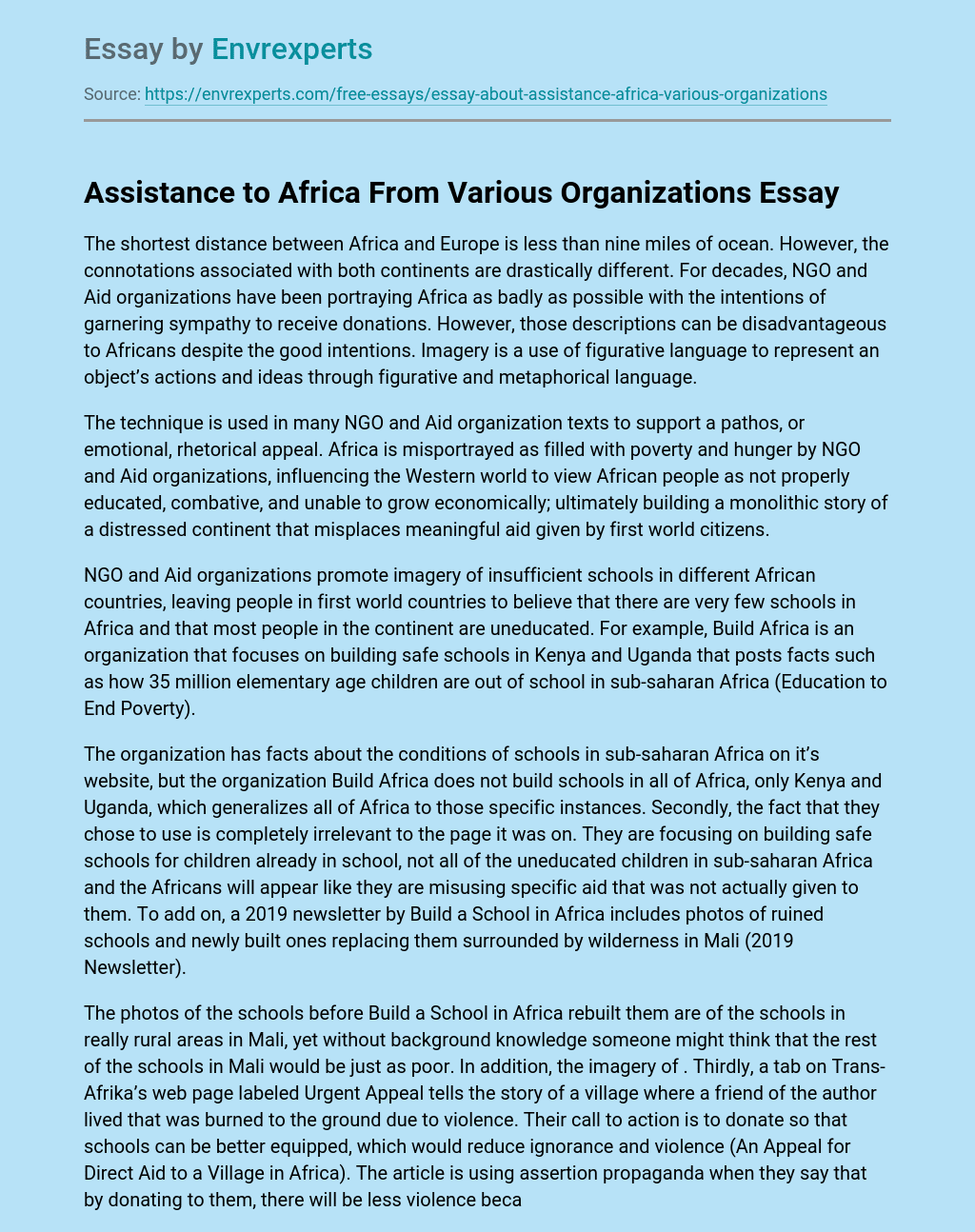