In recent years, people’s interest has grown for the development of the autonomous vehicles like robots in the agriculture. More than forty percent of the population in across the globe chooses agriculture as the primary occupation. This project aims to produce a multifunctional agricultural robot. The tropical climate of India, which makes it difficult for the cultivators to work for long periods of time. As a result creating problems such as wastage and economical loss. The major challenge faced by the cultivators is labor availability, this agrobot reduces labor cost up to nearly fifty percent.

Don’t waste time
Get a verified writer to help you with An Autonomus Agrobot Vehicle for Greenhouse Cultivation
Hire writer
$35.80 for a 2-page paper

The existing agricultural robots performs basic elementary functions like harvesting, planting and watering. Therefore, using an agrobot provides a perfect solution for the cultivators in such conditions. The developed agrobot is powered by an Arduino microcontroller and a node MCU which performs a few tasks at a certain time lapse. The project aims to protect the privacy of people and designing an agrobot vehicle controlled by mobile app for various agricultural activities such as ploughing( till the soil ), seeding, planting samplings, irrigation and sensing humidity salinity and sand pH levels inside the greenhouse.

In recent years, people’s interest has grown for the development of the autonomous vehicles like robots in the agriculture. More than forty percent of the population across the globe chooses agriculture as the primary occupation. Agricultural automation starts with some basic ideas creating an evolution in agricultural techniques. It minimizes the human efforts in the MODERN WORLD.

The multipurpose autonomous agrobot vehicle which can be controlled through Mobile app for ploughing, seeding and irrigation systems. This agrobot is powered by an arduino and a node-MCU which performs the tasks at a certain time lapse automatically.ESP8266 module connected with either Hotspot or any Router, which has a stabilized Internet connection. According to their requirements, the user can establish a connection between microcontroller and irrigation tool kit or drilling tool kit or the soil sensor . The user should have mobile application that provides an easy way to build IoT models. When the user controls the switch in mobile application, the RF signal is sent to the Cloud Server and at the same time signal is received through ESP8266 board.

To examine about the method in which this module is planned is explained in Figure 1.. The Module created is a joining of equipment and programming. The equipment is created utilizing agot featues and is controlled by android application through smartphones is the framework.
Block diagram
The block diagram is shown in figure 1 , which helps inn understanding the working principles.
The program for this proposed system will be compiled and uploaded to the controller using Arduino IDE. According to their requirements, the user can establish a connection between microcontroller and irrigation tool kit or drilling tool kit or the soil sensor . The user should have mobile application that provides an easy way to build IoT models. When the user controls(ON/OFF) the switch in mobile application, the RF(Radio Frequency) signal is sent to the Cloud Server and at the same time signal is received through esp8266 board. And the requested operation by user is done.

The purpose of the battery is to supply the necessary current to the ignition system. Flooded lead-acid batteries are the most cost effective and in past commonest traction batteries available. There are two main sorts of lead-acid batteries: engine starter batteries, and deep cycle batteries. No lead acid battery should be discharged below 50% of its capacity, because it shortens the battery's life. Flooded batteries require inspection of electrolyte level and occasional replacement of water which gases away during the traditional charging cycle. Traditionally, most of the electric vehicles use lead-acid batteries due to their mature technology, high availability, and low cost.

Figure 3 Lead acid battery
Like all the batteries in the market, these have an environmental impact through their construction, use, disposal or recycling. On the upside, vehicle battery recycling rates top 95% within the us . Deep-cycle lead batteries are alot more expensive and have a shorter life than the vehicle itself, typically needing replacement every 3 years.

The buck–boost converter is a kind of DC-to-DC converter that has an output voltage magnitude that's either greater than or the input voltage magnitude.It is like a fly back converter employing a single inductor rather than a transformer. Two different topologies are called buck–boost converter. Both of them can produce a variety of output voltages, starting from much larger than the input voltage, right down to almost zero. These converters are also known as the step up and step down transformers and these names are coming from the analogous step up and step down transformer. The input voltages are step up/down to some level of quite or but the input voltage. By using the low conversion energy, the input power is adequate to the output power.
Figure 4 Bug Boost convertor
The following expression shows the low of a conversion.This is an LM2596 DC-DC buck converter step-down module with high-precision potentiometer, capable of driving a load to 3A with high efficiency, which can work with arduino UNO, other mainboards and basic modules. When the output current keeps greater than 2.5A (or output power greater than 10W) , please add a conductor thereon . The working operation of the DC to DC converter is that the inductor within the input resistance has the unexpected variation within the input current. If the switch is ON then the inductor feed the energy from the input and it stores the energy of magnetic energy. If the switch is closed it discharges the energy.The output circuit of the capacitor is assumed as high sufficient than the time constant of an RC circuit is high on the output stage.
The huge time constant is compared with the switching period and confirm that the steady state may be a constant output voltage Vo(t) = Vo(constant) and present at the load terminal. In this converter the primary transistor is switched ON continually and for the second transistor the square wave of high frequency is applied to the gate terminal. The second transistor is in conducting when the on state and therefore the input current be due the inductor L through the second transistor. The negative terminal charging up the magnetic flux round the inductor.
The D2 diode is not conducted because of the anode is on the potential ground by highly conducting the second transistor.

Figure 5 Arduino uno rev3
The Arduino Uno is a microcontroller board based on their datasheet. They have 14 digital input and output pins. Here 6 pins are used as Pulse Width Modulation (PWM) i.e. output and another 6 can be used as analog inputs. Arduino board can be connected with USB cable or also by the power jack.
It gets started with the help of AC to DC adapter or battery. The external power supply can be operated at 6 to 20 volts. If the supply of external power is more than 12v then, the voltage regulator comes overheat and affects the board. It consumes the range from 7 to 12 volts only. The uno can be programmed by the Arduino Software. Arduino uno having the length of 2.7 and 2.1 inches. It also having the memories like EEPROM and SRAM with KBs.

The motor driver is an integrated monolithic circuit in a 15- lead Milliwatt and PowerSO20 packages. It is a high voltage, high current dual full-bridge driver de-signed to accept standard TTL logic level sand drive inductive loads such as relays, solenoids, DC and stepping motors. Two enable inputs are provided to enable or disable the device independently of the in-put signals. The emitters of the lower transistors of each bridge are connected together rand the corresponding external terminal can be used for the connection of an external sensing resistor. An additional Supply input is provided so that the logic works at a lower voltage.
Figure 6 soil sensor

The Soil Moisture Sensor uses capacitance to measure dielectric permittivity of the surrounding medium. In soil, dielectric permittivity is a function of the water content. The sensor creates a voltage proportional to the dielectric permittivity, and therefore the water content of the soil. The sensor averages the water content over the entire length of the sensor.
Figure 88
There is a 2 cm zone of influence with respect to the flat surface of the sensor, but it has little or no sensitivity at the extreme edges. The Soil Moisture Sensor is used to measure the loss of moisture over time due to evaporation and plant uptake, evaluate optimum soil moisture contents for various species of plants, monitor soil moisture content to control irrigation in greenhouses and enhance bottle biology experiments.
Result and Discussion
The project system with the help of iot based mobile application. So we can achieve our aim i.e. various agricultural activities such as ploughing (till the soil), seeding, irrigation and soil humidity level inside the greenhouse through the autonomous agrobot.

This concept can be later enhanced by adding many features. As, the present system can be upgraded with automatic harvesting systems which will help the consumer harvesting the crop inside the greenhouse. 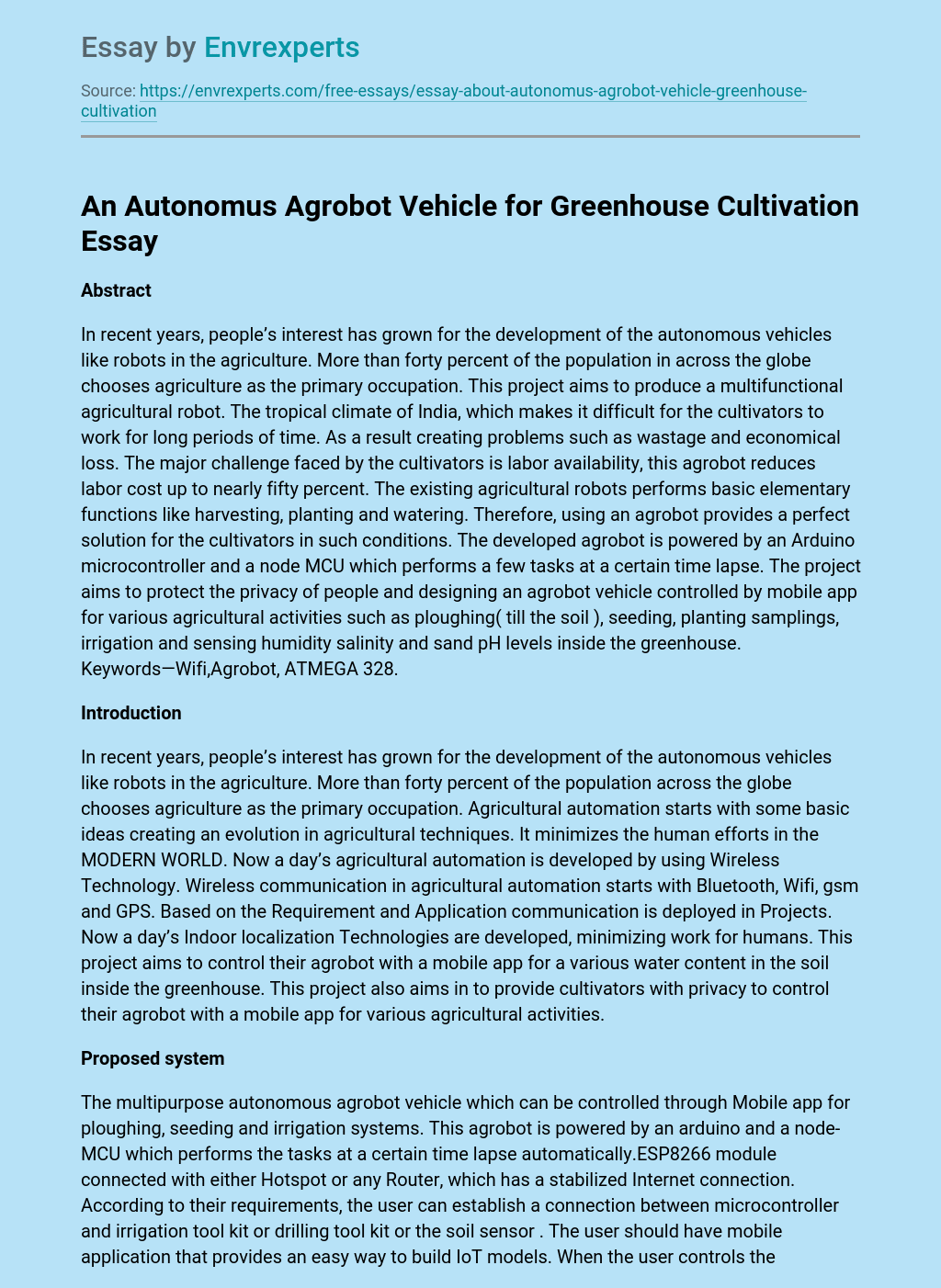