The case study I looked at was a study on the economic benefit of low-temperature geothermal energy in Italy's Marche region. The research was done to identify low cost, high efficiency potential areas for geothermal use. The scientists used GIS to show many different aspects through the entire article. They based their research on the use of GIS to show their data in an efficient, easy-to-read manner. Rather than using GIS in and of itself, they utilized other disciplines to show data through GIS.

Don’t waste time
Get a verified writer to help you with Benefit of Low-Temperature Geothermal Energy
Hire writer
$35.80 for a 2-page paper

For example, they showed the monetary benefit of the new energy idea in a map format, rather than a table or graph. This appeals to the general population more, as they can see the benefit right where they live in a picture rather than through wording. They obtained their data based on “physical knowledge of the area, and economic analysis”. This means they used data that was already out there from outside sources, and then performed an analysis using this data to incorporate economics into their models.

The research started out with the physical characteristics of the area, such as altitude. The models then shifted to the potential of low-temperature geothermal energy, and then the benefit and payback factors of using these areas. The "payback” factor shows how many years it will take to pay back the initial costs with the energy produced. Showing the benefits was not only monetary based, but also environmental, as the geographers included a model showing how much of a reduction in carbon dioxide emissions there would end up being.

They combined all of these models to show the ideal areas in the region to begin transitioning to low temperature geothermal energy. The GIS models are vector models.

The conclusion of this study was simple: it is more cost effective and sustainable to switch to low-temperature geothermal energy in certain regions of Italy. The main intent of the article is to be a tool used by policy-makers. It is pitched to inform them of the benefits of switching over to this renewable source, in the hopes of change. Not only that, but it gets homeowners on board, because it would in turn lower their energy bill, particularly heat. The scientists also mention the use of this document for energy corporations who are thinking about the geothermal business as a reference to use for areas of interest. If the study is used in the Marche region, they advise splitting the region up into sub-regions of geothermal potential (which they also showed in their GIS models). At the very end, they explain that “The methodology proposed here is not tailored to a specific region and can easily be extended to other territories.” This insinuates the need for this study elsewhere.

As a citizen concerned about the future of the planet, this article caught my attention because it very clearly states the benefits of geothermal energy, a renewable resource. It proves that it is more cost-effective than the current system, and more beneficial in the long run. It also shows how easy it is to analyze a region for geothermal potential. I believe that opening the public eye to alternatives is very important, however, opening the eyes of corporations and policy-makers may be more important. Without their contribution, the public will never see the benefits. The fact that this article clearly articulates that idea is satisfying, in my opinion. Since this study is so localized, it makes it hard to apply it to other areas. However, I think it would be beneficial to conduct this same study in a larger scale. In the United States, for example, Yellowstone National Park provides a huge potential of geothermal energy. It could potentially be used to power the entire northwest region of the country. I think a similar study that emphasizes corporations and governments to get on board would be a huge help for the transition away from fossil fuels. That transition is essential because of the rapid depletion of these resources. Research studies like this one is required to begin this transition. I believe the rest of the world could take the example set by these scientists, and use it to benefit the planet as a whole. 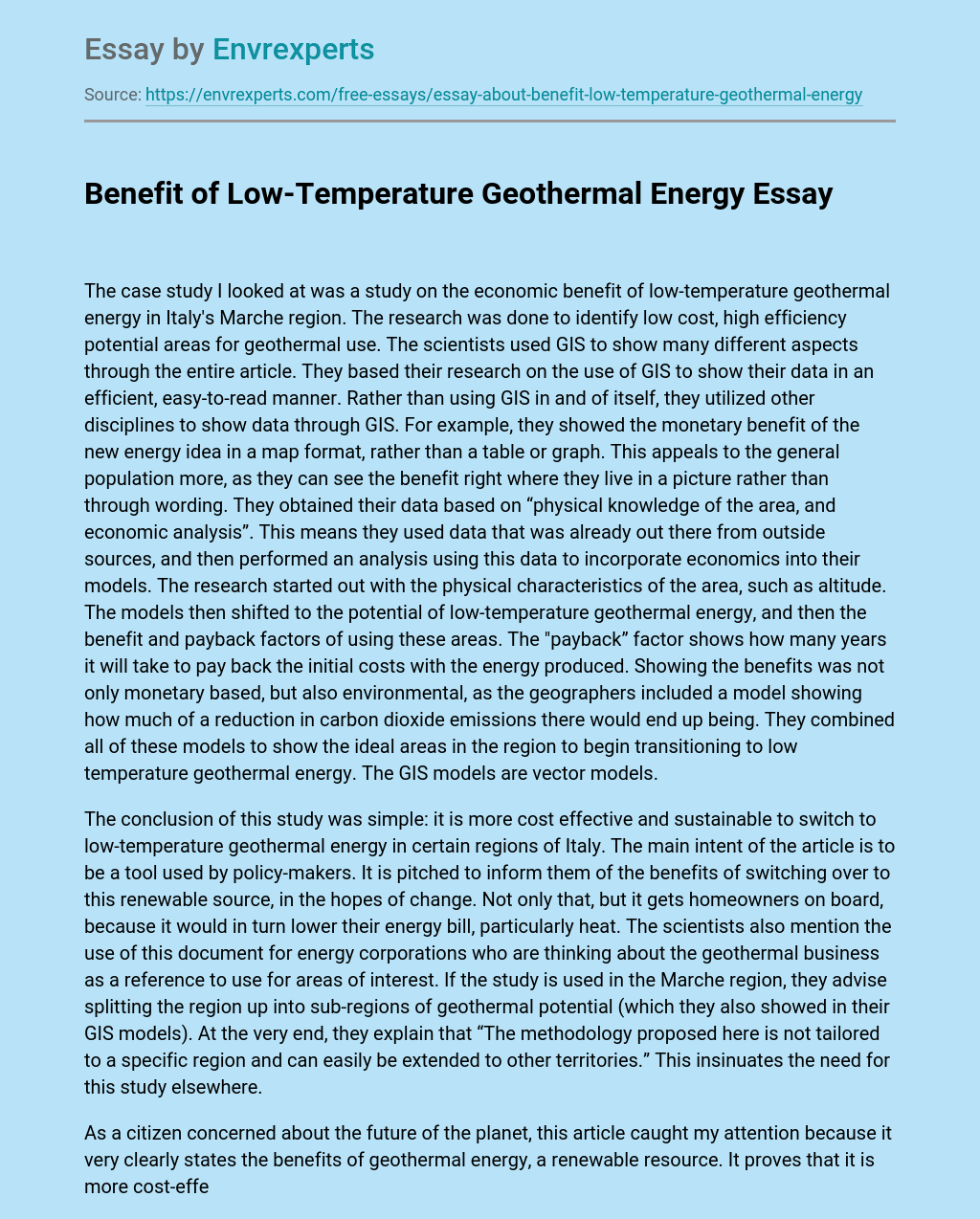