A Better Understanding of a Few Facts About Acid Rain

Acid from the clouds

Lake Barkevatn in Aust-Agder county used to have healthy stocks of trout and perch. As a result of acid rain, the trout stock died out in the mid-1970s and the perch stock at the beginning of the 1980s.

+ Precipitation that is polluted by sulphur dioxide (SO2) and nitrogen oxides (NOX) is known as acid rain.

+ Acidity is measured in pH units: the lower the pH, the more acidic the substance. Unpolluted rain has a pH of roughly 5.

Don’t waste time
Get a verified writer to help you with A Better Understanding of a Few Facts About Acid Rain
Hire writer
$35.80 for a 2-page paper

6, but there are natural variations. Acid rain and snow, with a pH of about 4.4, has fallen in southern Norway for many years, causing serious environmental damage in many areas. The severity of the damage depends more on the total input of sulphur and nitrogen than on the acidity of each raindrop.

+ More than 90 per cent of the acid rain that falls over Norway originates in other countries.

+ Cuts in emissions have reduced the acidity of rain and snow recently.

+ As a result of higher precipitation in recent years, sulphur deposition has not dropped as much as might be expected from the reductions in emissions.

+ Estimates of how much pollution the environment can absorb without damage are called critical loads.

+ Sulphur, like nitrogen, is essential to all animals and plants. The natural sulphur cycle includes volcanic emissions, sulphate in sea salts, and sulphur compounds produced by marine organisms.

On a global basis, emissions from such sources are of about the same order of magnitude as those from the combustion of fossil fuels (coal and oil), but like many other essential substances, sulphur is harmful in excessive amounts. Much of Europe and North America is suffering from sulphur deposition that exceeds critical loads as a result of the large amounts of such compounds generated by human activity. Critical loads are exceeded across more than one-third of Norwegian territory. Coal-fired power stations account for a large proportion of sulphur emissions in Europe.

+ Nitrogen oxides (NOX) react to form nitric acid, another important component of acid rain, in the atmosphere. Until now, nitrogen compounds in precipitation have mainly been absorbed by plants or stored in the soil. Scientists fear that the amount of nitrogen that can be taken up in this way will be exceeded, thus intensifying acidification in some areas. Road traffic is responsible for more than half of all nitrogen emissions in Europe

Rivers and Lakes are Dying

In Germany, a mention of acid rain immediately makes people think of dying forests, whereas Norwegians associate it with the death of fish in lakes and rivers. Thousands of trout stocks have been lost for ever. Parts of the Norwegian natural heritage have literally died out, and many rivers are only kept alive by regular liming.

There are several causes of acidification, and various mechanisms by which it may occur. Acid rain falling on water bodies has a direct effect. In areas where soils are acid, runoff from the soil transports acidic water, which may also contain aluminium, into lakes and rivers. Soil acidification may be caused by acid rain, but other factors may also be involved. For example, if pasture reverts to coniferous forest, the soil will become more acidic. Rain carrying large amounts of sea salt may also result in acidic runoff even though the rain itself is not acidic. Salty rain leaches acid components out of the soil and transports them to the rivers.

The chemical content of acid rain is in itself dangerous to fish and other freshwater organisms. Another, equally important reason why fish populations are depleted, impoverished or, as is often the case, wiped out altogether, is that acid water leaches toxic aluminium from the soils and bedrock where it naturally occurs in large amounts. The combination of low pH and the presence of aluminium kills trout, char, salmon, perch and other fish in Norwegian waters. Spawn and fry are the most vulnerable stages. Salmon and rainbow trout have a lower tolerance for acid water than a number of other species. Salmon smolt, i.e. young fish that are ready to migrate to sea, are most sensitive. Since the 1970s, the number of lakes that have lost their fish stocks has more than doubled, and is now estimated at roughly 4,000 to 5,000. The critical loads for acid rain in Norwegian river systems have been exceeded across about 36 per cent of the country.

The damage caused by acidification in rivers and lakes is mainly a Scandinavian phenomenon. Further south in Europe, the rocks are richer in calcium and weather more easily, so that the water contains higher concentrations of substances that can neutralize acid inputs. Acidification of rivers is therefore unusual outside Scandinavia, although inputs of acid rain are higher in many other parts of Europe. However, in eastern North America, northern Scotland and parts of the Alps, the geology is more like that of Scandinavia, and there are more acid rivers.

A Century of Acidification

Fish mortality caused by acid rain is not a new phenomenon. Fish stocks probably died out in a number of Norwegian lakes as early as the turn of the century, but it was not until the 1950s and 1960s that this phenomenon was associated with acid rain. The connection was not generally accepted by scientists until the 1970s, at about the same time as the area affected began to increase dramatically.

The southernmost counties of Norway have been hardest hit. This region has received large amounts of airborne pollution from abroad ever since the Industrial Revolution. In the mid-1970s, scientists estimated that fish stocks in an area of 13,000 km2 had been wiped out, and that those in a further 20,000 km2 had been damaged to some extent.

In 1986, the most extensive survey to date was made, involving measurements and sampling of 1,000 lakes. Scientists found that the area in which fish stocks had been lost completely had increased to 18,000 km2, and the area in which they were damaged to 36,000 km2.

In 1989, scientists showed that fish stocks in an area of 70,000 km2 had been damaged by acid rain. This is not directly comparable with the figure from the 1986 survey because different methods were used. In 1993, it was estimated that there was damage in an area of 86,000 km2. The steep increase is partly a result of improvements in methodology and the fact that a larger area has been studied, but there has also been a real increase in the extent of the damage.

Scientists now estimate that an area of more than 110,000 km2 receives such large inputs of sulphur that the environment can no longer withstand acidification. If we include acidification caused by nitrogen, the total area affected is about 120,000 km2.

In recent years, it has been shown that serious damage caused by acid rain is no longer confined to the southernmost counties of Norway. There is growing evidence of damage to fish stocks in Vestfold, Buskerud, Oppland, Akershus, Hedmark and +stfold as well. Eastern Norway is becoming acidic, and thousands of lakes are in danger.

Acid rain is affecting parts of Western Norway too. In 1989, it was found that 8.5 per cent of fish stocks in Hordaland county had been lost and 29 per cent depleted. The corresponding figures for Sogn og Fjordane were 5.5 per cent and 16 per cent, respectively. Further north, acid rain does not appear to be a problem as yet, except in eastern parts of Finnmark county. The large refineries on the Kola Peninsula in Russia spew out huge amounts of sulphur dioxide. The prevailing north-easterly winds carry most of this away from Norway, but despite this, more and more signs of damage are being discovered in rivers and lakes. Scientists estimate that critical loads have been exceeded in about 70 per cent of S*r-Varanger municipality.

A Better Understanding of a Few Facts About Acid Rain. (2021, Oct 31). Retrieved from http://envrexperts.com/free-essays/essay-about-better-understanding-few-facts-about-acid-rain 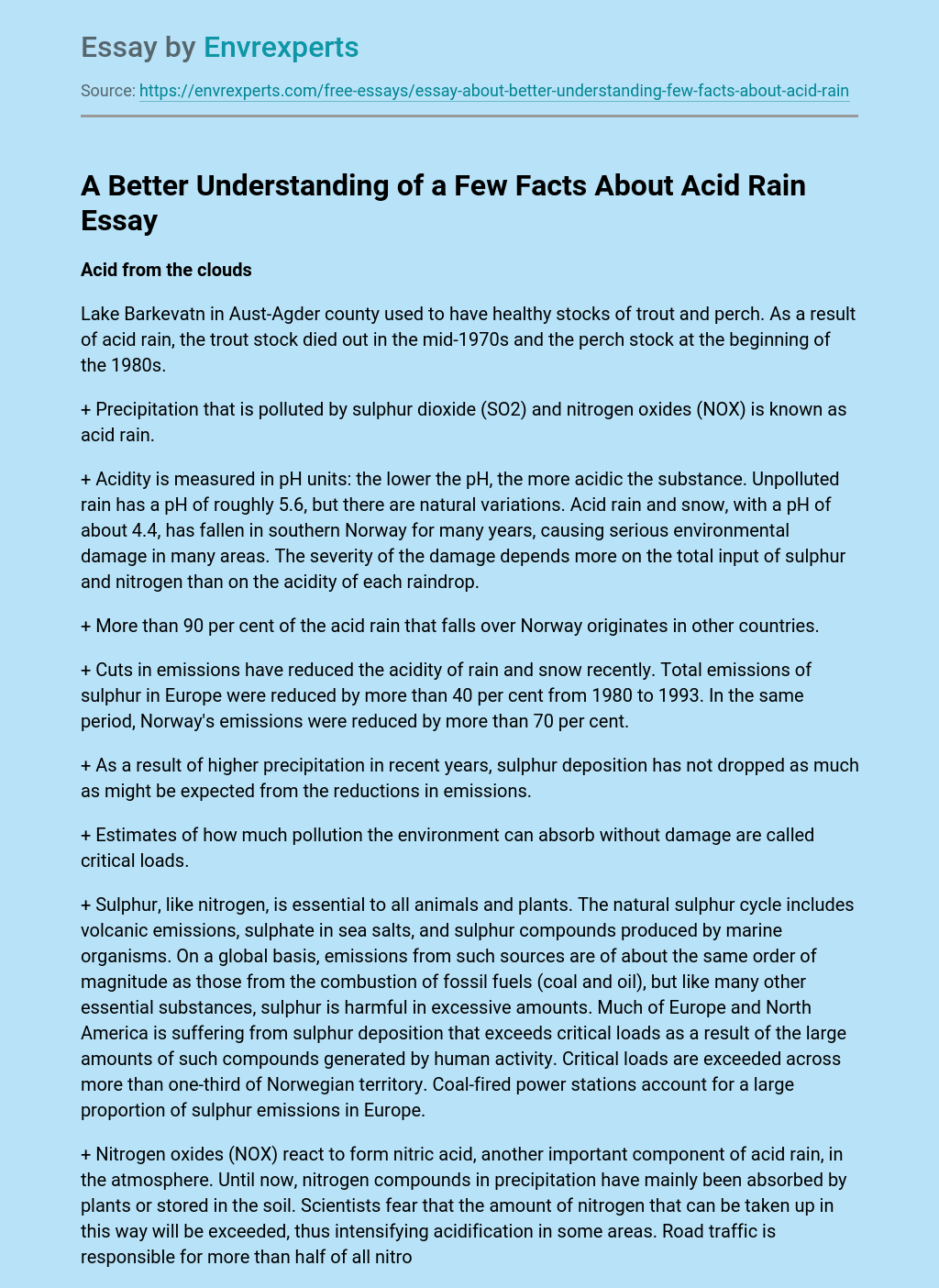