Acid rain is precipitation of higher than normal acidity. Manmade increases in the acidity of precipitation are traced mainly to the burning of coal, oil, and gas by heavy industry and electrical utilities. Burning these fuels releases sulfur and nitrogen oxides (Sox and Nox) to the atmosphere where they combine with water vapor to produce sulfuric acid (H2S04) and nitric acid (HNO3). The acids in the atmosphere are carried and deposited on the earth s surface in the forms of rain, snow, and other precipitation.

Don’t waste time
Get a verified writer to help you with A Better Understanding of How Acid Rain Forms and Its Devastating Effects
Hire writer
$35.80 for a 2-page paper

Acid rain in Canada is very harmful since it causes damage to manmade structures, it poses a threat to our living earth and in addition, it is very expensive to control.

Although there is not yet a sure way of eliminating acid rain, it is very expensive to control. Adding lime to lakes affected by acid rain may neutralize the lakes. Studies prove that adding lime to pretentious lakes produces a buffering action. The more lime a lake possesses, means that there is more buffering capacity present, which in turn means that the lake will survive longer.

The lime, quite similar to the limestone at the bottoms of certain lakes, neutralizes the acid by buffering the lakes. Ontario has begun dumping lime into its lakes in an expensive attempt to save them. Dumping lime into lakes is an expensively precise way of controlling acid rain, yet it is not the only way.

Other ways of controlling the damage caused by acid rain include breeding fish, which are resistant to acid, washing high sulfur coal, and adding scrubbers to smoke stacks.

Breeding fish, which are unaffected by acid, is viewed as a ridiculous idea by many. The idea has not yet been tested and the policy allowing this to be implemented will take approximately 3-5 years to come through. Experiments, however, breeding anti-acid fish have been tested and the results did not compare with the other ways of controlling acid rain. In fact, they were much more costly and much less efficient. High sulfur coal could be treated yet this procedure is also expensive. Washing coal reduces the sulfur content of coal by 20-50%.

Laws that have restricted sulfur dioxide emissions are evidence that lake acidification is not as rapid as had been predicted. But small gains cannot erase the very real fact that acid rain is a major environmental threat.

Scrubbers could be added to smoke stacks to prevent the SO2 from entering the atmosphere, this too is expensive. The cost for this is about $100-250 million. Everyone wants a clean environment however no one wants to be the one to pay for it.

Acid rain has been associated with the damage to manmade structures. Sulfur dioxide (SO2) mixed with water, causing acid rain, results in sulfuric acid, a potent chemical that can dissolve stone. Acid rain is linked with the deterioration of exposed surfaces of building, monuments and statues. Buildings that have braved decades are being eaten away by acid rain. Acid rain causes the erosion of buildings and their exteriors to flake away. Fresh paint on buildings and new cars fades quickly and may be marred with blotches of discoloration or indelible spots. Buildings, monuments and statues are not the only manmade structures that are damaged by acid rain. Acid rain is liable for damage to cars and metal. Acidification is blamed for the damage to the paint on cars. It is also held responsible for corrosion of exposed metals. Metals are corroding and structures are being eaten way due to acid rain.

Acid rain poses a hazard to our living earth. It has destroyed the life in thousands of lakes. In Canadian provinces, thousands of lakes and streams have acid concentrations so high that aquatic food chains are destroyed and fish die off. Acid rain kills fish by disrupting their internal salt balance, causing shock and asphyxiation. Hundreds of lakes, in Canada are totally devoid of fish due to excessive acidity.

When acid rain falls, the concentration of hydrogen ions increases, increasing the rate at which salt is lost from a fishes body, and blocks salt reabsorption. This causes the blood to thicken which leads to cardiovascular collapse. Increases in acidity also kills eggs and young fish.

In Canada, one out of every 10 lakes is acidified and fishless. These dead lakes will produce a dying industry and a declining economy. Acid rain has eerily reduced lakes, rivers and ponds, yet it has caused many more dangers to the earth.

Acid deposition has caused many problems and stunted agricultural crop growth. It has been shown to scar and retard crop growth. In Southwestern Ontario, tobacco crops are already suffering. Acid rain has also killed the vegetation around Sudbury. It was caused by local and partly from Eastern Canada SO2 emissions. Acid rain has also been shown to cause damage to soybean crops, tomatoes and other leafy vegetables. Acid rain is the culprit in these examples, the death of many agricultural crops is a serious obstruction, however, acidification causes more setbacks on our planet.

Acid rain poses a threat to forests and has a negative effect on soil chemistry. There s a strong likelihood that acid rain will stunt the growth of Ontario forests, directly affecting the multi-billion dollar forest products industry. Acid deposition has been blamed for causing needle loss, leaf yellowing, branch and crown die back and eventual death of trees in coniferous and deciduous forests. Acid rain has been associated with the decline of forests and with the changes in soil chemistry.

Aluminum is abundant in most soils and is in certain forms toxic to many organisms. If soil acidity is increased by acid rain, the aluminum becomes more soluble and washes into streams and ponds, where it can injure exposed organisms.

Aluminum is an essential nutrient in the soil and when it washes into streams and ponds due to acid rain, it is leached away from soil, where it can harm some organisms. In Canada, sugar maples are dying over wide areas, due in large part to the increasing acidification of soils in eastern Canada. Acid Rain not only threats the survival of many forests, but also leaches essential nutrients from the soil.

In Canada, acid rain is very dangerous to manmade structures, it presents a hazard to our living earth, and it is also very costly to control. Eliminating acid rain is not yet possible, however it is very expensive to control. Acidification is linked with the deterioration of exposed unnatural surfaces. However, the most frightening fact about acid rain is that it is hazardous to our environment. Acid rain is not a new problem, but it must be stopped.

A Better Understanding of How Acid Rain Forms and Its Devastating Effects. (2021, Oct 31). Retrieved from http://envrexperts.com/free-essays/essay-about-better-understanding-how-acid-rain-forms-and-its-devastating-effects 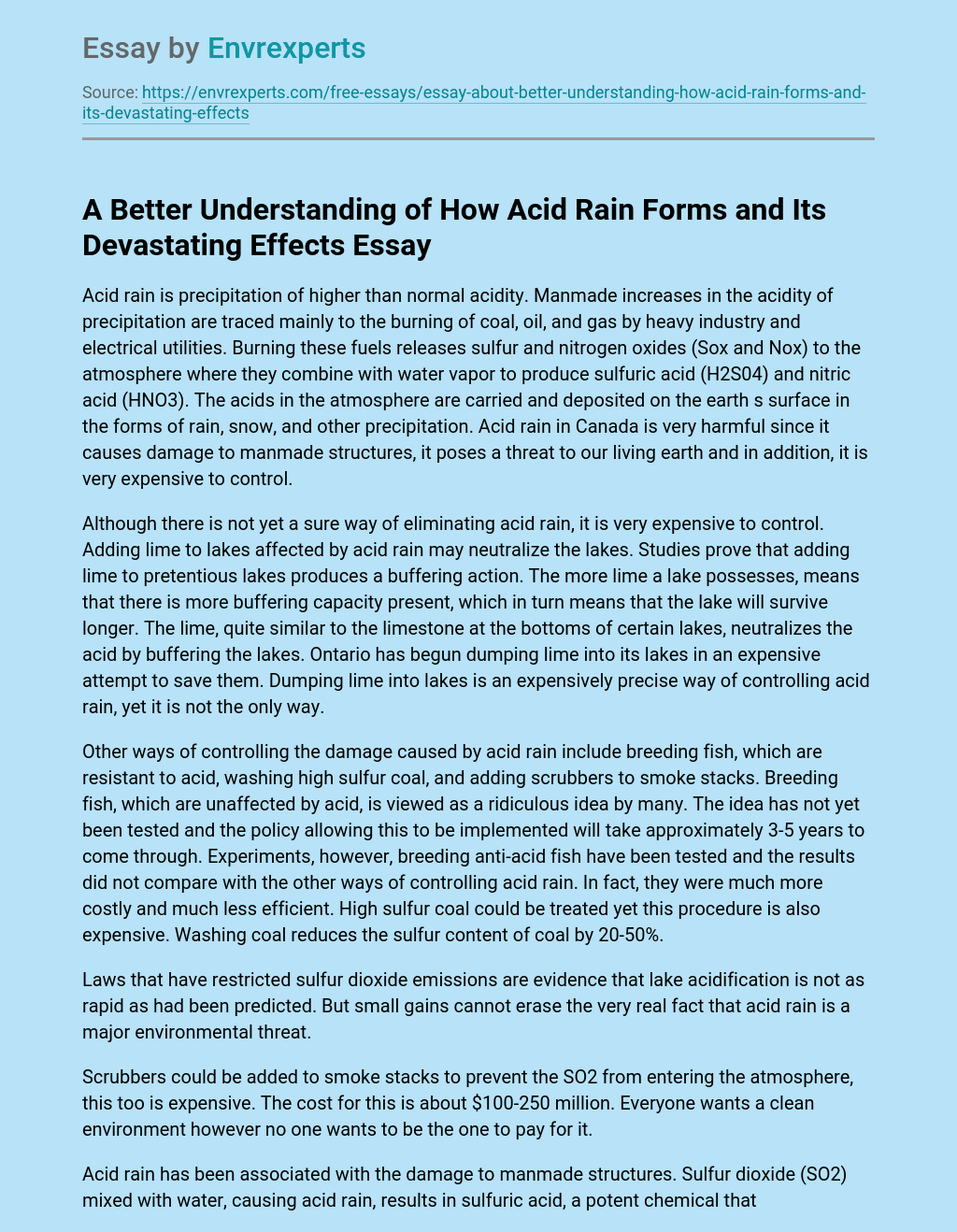