Don’t waste time
Get a verified writer to help you with A Better Understanding of the Phenomenon of Global Warming and Its Effects
Hire writer
$35.80 for a 2-page paper

Global warming is the term used to describe a moderate increase in the earth's temperature as a result of human activities. Examples include, the burning of fossil fuels and the production of chlorofluorocarbons (CFCs) which build up greenhouse gases in the atmosphere. The greenhouse effect is a term used to describe the warming of the earth's surface due to the presence of carbon dioxide and other atmospheric gases, which trap radiant heat at the earth's surface.

It is believed that since the Industrial Revolution began about 250 years ago, atmospheric carbon dioxide has increased from a value of about 275 parts per million before the Industrial Revolution to about 360 parts per million in 1996, and the rate of increase has speeded up over this span of time (Hartmann). Scientists have determined this by measuring the carbon dioxide levels in the air that became trapped in glaciers, hundreds of years ago. They then compare this to the amounts of carbon dioxide in today's air.

Global warming was first predicted in 1896, by a Swedish chemist named Svante Arrhenius. Arrhenius realized that the amount of carbon dioxide being released into the atmosphere was increasing rapidly due to industrialization. Arrhenius predicted that doubling the amount of carbon dioxide in the atmosphere would raise the earth's average temperature by about 5.C (Herring). Though no one really paid any attention to him, Arrhenius's prediction was surprisingly accurate. He was only off by about 2 to 3 degrees. This is very remarkable, considering he had to make the calculations by hand without the aid of scientific equipment. It was not until the 1980's that it was determined global warming was actually occurring, almost a hundred years after it was first predicted by Arrhenius. Global warming has already raised the average temperature of the earth's surface by about 0.5 degrees within the last one hundred years (Bates 6). The top ten warmest days in recorded history have all occurred within the 1990's. Global temperature changes between 1861 and 1996 are outlined in Diagram 2. It has been estimated that global average temperatures will increase of as much as 9 degrees F (5 degrees C) before the year 2999 (6).

Up until recently most of the carbon dioxide produced was absorbed by the world's oceans, trees and soils. The rest remained in the atmosphere. Unfortunately, now we are producing more carbon dioxide and our oceans, trees and soils are absorbing less. This is partly attributed to the fact that our forests are being destroyed. Research has been done to show that as many as 60 acres of rain forest are being destroyed, every hour, every day of the year. (The Rain forest Trust Inc.) In the world, only 22% of the old growth forests are still alive. This is because more forests are being cleared to make room for farming and the trees are not being replaced. This destructive process is called deforestation. Deforestation has been going on since man began clearing land for agriculture and has increased substantially during the industrialization period. The dramatic decline in the earth's forested areas can be seen on Figure 1. Figure 1 shows that between the years 900 and 1990 the earth's forested area has declined from 40% to 20%. The rain forests of the world are being destroyed at an alarming rate. Their loss is very concerning because they do not grow back easily. Forests are important because they absorb carbon dioxide from the atmosphere and release oxygen back into the atmosphere. Forests help reduce carbon dioxide levels in the atmosphere.

If current trends continue, the world's rain forests could disappear in the next few decades. As a result of the loss of these forests, global temperatures are rising faster than they ever have because less carbon dioxide is being removed from the atmosphere. Should global temperatures continue to increase at present day rates, scientists believe that there may be many negative impacts from global warming. For example, should temperatures continue to rise, polar ice caps and glaciers will melt, causing the sea and ocean levels to rise. Many beaches will sink beneath the water and many parts of low lying counties will be submerged below water. It is also possible that some coastal areas will be completely covered by water. The world's ocean levels have already risen about four to six inches since 1990 and it is expected to rise another six inches by the year 2100. (Leatherman) This could flood many coastal cities, leaving thousands of people homeless. Maps 1 and 2 show the potential impact of raising sea levels on North Carolina and Florida respectively.

Another potentially disastrous effect of global warming is a reduction to the general health of people. There are some diseases that only affect people that live where the climate is extremely warm. As a result of a general increase in temperature there will be more people dying everyday because of heart problems related to heat exhaustion. Hospital admissions show that death rates increase during extremely hot days, particularly among the very old and very young people living in cities. (Compton's) Diseases in tropical areas, like yellow fever and malaria would be more common in areas like Canada and the United States should temperatures rise. This would cause thousands to die each year from these tropical diseases.

Global warming trends will also change rainfall patterns. Some areas of the world will become wetter while others will become drier. Historical evidence suggests that the grain-growing areas of North America are likely to have less rain (Bates 19). This would result in the Great Plains becoming a grassland or desert and the corn belt would experience more frequent droughts. These changes in rainfall patterns will test the agricultural and water management skills of many countries.

It is still possible for both industrialized and developing countries to stop global warming. To prevent serious environmental problems associated with global warming we will have to bring together widely different cultural, political and economic interests to pursue the majority of the world's people to make sacrifices for the sake of future generations.

In December 1997, an agreement was made between 160 countries, in Kyoto, Japan, to cut greenhouse emissions by 5.2% below 1990 levels by the 2008-2012 period. This means that the United States and Japan will have to lower their greenhouse emissions by 7 and 6 percent respectively. This reduction is to be accomplished by a blend of taxes and regulations, with some subsidies for implementing green technologies. (proquest article) Most companies are trying to work well ahead of the agreement date and reduce greenhouse emissions now. Should a company cut their emissions to the point where they reduce their emissions by more than 5.2%, they can receive pollution credits, which can be sold to other companies.

Stopping global warming will not be an easy task. There are going to have to be many initiatives taken to stop global warming. The only way we will be able to accomplish this is by getting the whole world to work together and reduce the production of carbon dioxide. This is especially true for the United States, a country which is the biggest polluter on the planet. The most effective way to prevent global warming is to stop emitting dangerous greenhouse gases into the atmosphere. A good way to reduce carbon dioxide emissions is practice the three R's, reduce, reuse and recycle. Purchasing food and other products in reusable and recycled packaging can help reduce carbon dioxide emissions by 230 pounds per year, while recycling all household waste newsprint, cardboard, glass and metal can reduce carbon dioxide emissions by an additional 850 pounds per year (http://www.p2 pays.org/ref/01/00183.htm). Less use of automobiles, greater use of bicycles and more reliance on walking would also help to reduce carbon dioxide emissions into the atmosphere. There are other gases like nitrogen and oxygen that have little or no effect on greenhouse warming. We need to find ways to replace the dangerous fossil fuels with these less harmful gases instead. We should immediately start implementing alternative energy sources like solar power, hydropower, and wind power. These sources of energy do not add to global warming but are very expensive to implement today.

When we entered the 20th century, the human race did not have the technology to greatly alter the delicate balance of our planet. During the 20th century the human race quickly developed technologies and industrial processes that began to affect the balance of our planet. The problems related to global warming, which we face at the start of the new millennium cannot be separated into compact, well defined groups. The issues we face today are not just increased carbon dioxide levels, deforestation, increased sea levels, or increased polar ice melting. These issues are all interrelated and global in nature. They are also not just problems of science, they are political, economical and cultural problems.

Global warming will only became a political and cultural priority when people see it as a serious problem which is likely to affect them personally. We first need to be able to understand clearly the direct impacts which global warming will bring before we will begin to change our values and lifestyles to one based on sustainable development practices. Sacrifices will have to be made from our current high standards of living in industrialized countries.

While there does not appear to be any agreement on the scope and timing of the effects of global warming, we as a civilization face an uncertain future if we do not change our ways. Bates writes, "we stand at the edge of an onrushing catastrophe" (Bates 190). The human race needs to collectively act to avoid a global crisis.

We as humans have the ability to change and adapt to change around us and to decide what our life will be like. Governments of the world will need to work together to stop global warming. There is only one planet that we can live on right now, so we need to respect it and protect it. We must stop destroying our only home. Are we as Canadians prepared to make the sacrifices needed to change our attitudes about our high standard of living and the pursuit of personal wealth in order to save our planet?

A Better Understanding of the Phenomenon of Global Warming and Its Effects. (2021, Oct 31). Retrieved from http://envrexperts.com/free-essays/essay-about-better-understanding-phenomenon-global-warming-and-its-effects 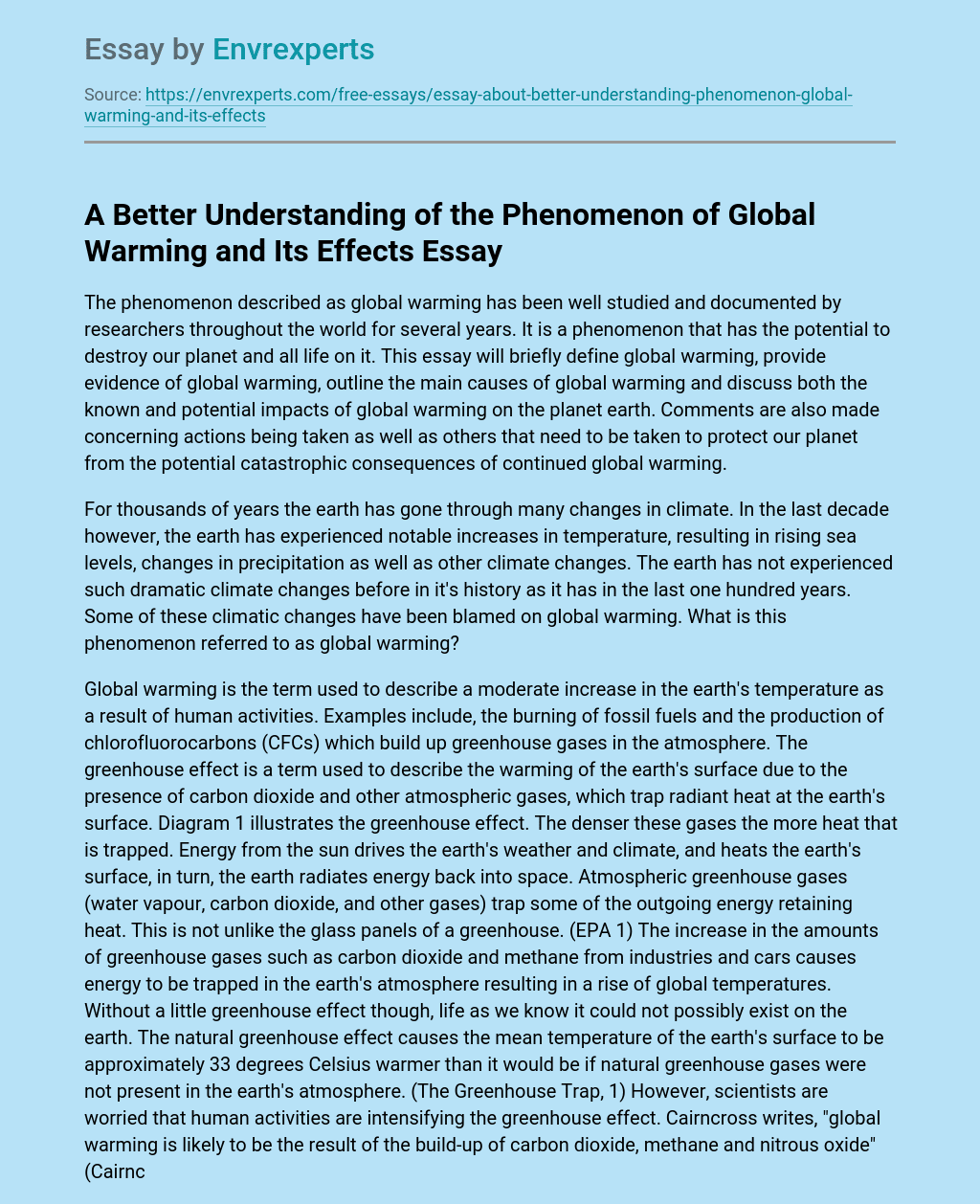