Increased crime levels have become a significant problem in the United States. Researchers have attempted to address these problems by looking deeper into the human body. This research has given law enforcement a broader understanding of why certain human characteristics can contribute to crime. Criminal behavior is said to have no singular driving force. Therefore, internal and external factors such as elevated levels of hormones, psychosis, and personality characteristics and environmental contamination can act as a contribution. This essay will address how biological and psychological theories have an underlying contribution to criminal behavior.

Don’t waste time
Get a verified writer to help you with Biological and Psychological Theories and Criminal Behavior
Hire writer
$35.80 for a 2-page paper

Body chemistry theories such as elevated levels of hormones have been shown to cause disruptive behaviors in both males and females. For example, increased levels of testosterone have been linked to negative behaviors. According to Criminal Justice Research, “Researchers
have found that higher levels of this hormone are associated with increased levels of violence and aggression, both in males and females. Criminal samples have been found to have higher testosterone levels when compared with noncriminal samples, although these levels were still
within normal limits” (Criminal Justice Research, 2015).

Although individuals with therapeutic levels of testosterone are not seen to be aggressive or contentious, heightened levels can lead to dominance and early signs of criminal involvement. Studies have shown that males who possess
an enhanced level of testosterone can have a higher sex drive and be more prone to committing rape. Additionally, the abuse of steroids has been shown to increase testosterone levels in males to an unhealthy level. Steroids are primarily used by bodybuilders who inject themselves with an
anabolic androgenic solution that may cause hypomania or manic episodes.

The abuse of steroids has attributed to the acts of robbery, assault, and battery.

Studies have also shown that females who possess higher levels of testosterone exhibit aggressive dominant behaviors. These behaviors often stem from a subtle change in hormones. Environmental factors such as inadequate living conditions and exposure to contaminants have contributed to violent tendencies and social aggression. Environmental factors have been proven to elevate violent behaviors. For example, exposure to toxic chemicals can play a part in the alteration of one\'s mood. Studies have shown that pregnant mothers and children are greatly affected by these encounters. Women who consumed alcohol or smoked while pregnant were more likely to have children with health problems. “Prenatal exposure to alcohol, tobacco, and illicit drugs has the potential to cause a wide spectrum of physical and developmental challenges for these infants” (NCSACW, 2019). Drug exposure and second-hand smoke during fetal development have caused effects such as behavioral and developmental delays in later years. Additionally, lead has been shown to hinder a child\'s developmental process. According to Schmalleger (2018), lead interferes with normal brain development in children by destroying the myelin sheaths that surround the brain cells, interfering with neurotransmission. Lead poisoning and air pollution can hinder an individual\'s ability to properly develop often causing damage to parts of the brain. Short-term contamination of lead in water has resulted in a spoke of blood lead levels in humans.

As a result, levels of aggression and violent tendencies have increased from childhood into adulthood. In addition, psychological theories such as psychosis and personality disorders have been shown to cause disruptive behaviors in both males and females. Psychological theories differ
greatly from body chemistry theories in that they are generally linked to mental illness. For example, temperament and emotional stability allow individuals to behave in an appropriate manner. In early childhood and infancy, temperament that is uncontrolled can predict criminal tendencies later in life. For instance, negative mood in childhood can lead to undesirable behaviors. Personality characteristics are primarily linked to antisocial behaviors that detach
them from the social norms. For example, individuals diagnosed with schizophrenia are often classified as psychotic and tend to show these signs young adulthood. These signs can include delusions, hallucinations, and paranoia. Due to the mental abnormalities they possess, they can
develop a pattern of violent behaviors. According to Schmalleger (2018), “Psychopaths, many of whom are known as effective manipulators, and who clearly understand the motivations of others, are said to disassociate emotionally from their actions and lack empathy or sensitivity toward others.” Although psychopaths have an understanding of their actions and surroundings, they are more likely to commit crimes due to a lack of emotion or remorse. Studies show that, “Anger related to delusions was strongly linked with attempting to harm others. After adjusting for other factors, 31% of the minor violence could be attributed to anger connected with delusions” (Szalavitz, 2013). Personality characteristics often stem from temperament that is
developed throughout childhood.
In my opinion, both biological and psychological theories can explain why some individuals have the potential to commit crimes over others. Crimes aren’t generally derived from one single factor, but instead from multiple factors. Individuals may suffer from poor environmental factors or personal occurrences that can lead them to be psychologically unstable. For example, personality traits and mental disabilities contribute to the crimes committed today. Someone who behaves in an extreme manner will believe their actions are acceptable, whereas society may believe they are not. Biological theories, such as hormones, can greatly affect how one functions. Men who experiment with steroids can experience roid rage which leads to a loss of impulse control. In addition, an individual living in an area that is contaminated with toxins and impoverished is more likely to experience increased brain damage compared to someone
who lives in an uncontaminated area. I believe that dysfunctions occurring in ones brain will affect their ability to make informed choices. These four theories explain the underlying causes of criminal behavior executed by human beings.
Biological and psychological theories have helped contribute to the identification of criminal behavior in humans. Theories show that human behavior results from a variety of factors, including internal and external influences. These influences can have a negative impact on individuals resulting in unpredictable behavior. Studies conducted on genetics, brain function, and mental disabilities provide law enforcement with the knowledge and understanding of what contributes to violent criminal behavior. 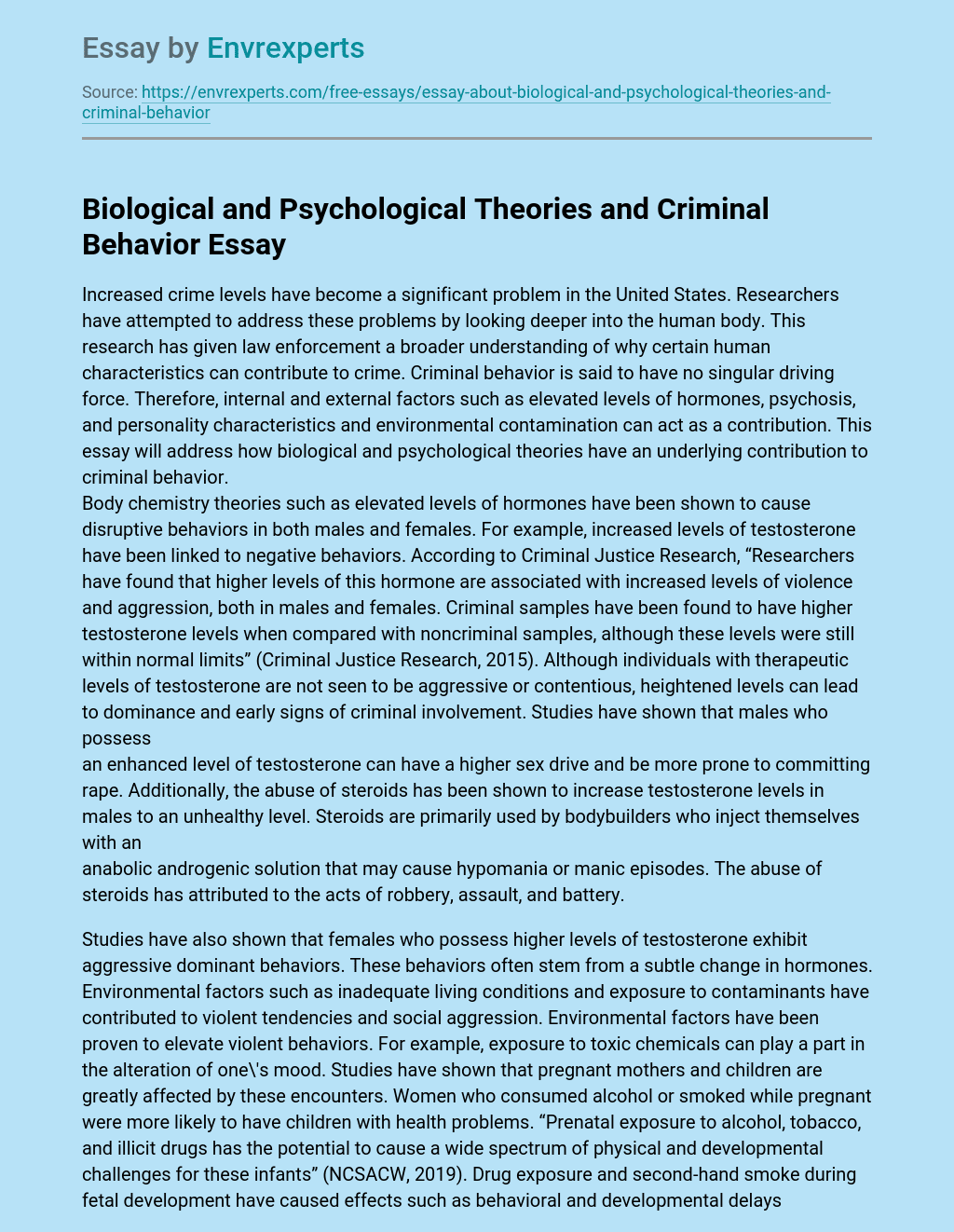