Don’t waste time
Get a verified writer to help you with BP Gulf of Mexico Oil Spill
Hire writer
$35.80 for a 2-page paper

It resulted in the deaths of 11 people, leaving 17 more injured. This paper serves as an analysis of the event in an attempt to determine the impacts it caused to the nation.

The BP Gulf of Mexico oil spill happened on the night of April 20, 2010. A natural gas surge blasted through a concrete core that was installed recently for purposes of sealing the well for future use (Griggs, 2011). Later, it was realized that another similar incident had happened on another BP-owned rig in September 2008.

Both of the cores were reported of being too weak to withstand the amount of pressure because they were composed of a mixture of concrete, which used nitrogen gas to accelerate curing. After being released by the core fracture, the natural gas moved up the riser of the deep water rig towards the platform and then ignited, killing 11 workers and injuring 17 more. The oil rig then capsized and sank on the morning of April 22. As a result, the oil started discharging in the Gulf of Mexico.

BP estimated that the amount of oil that escaped from the damaged well was about 1000 barrels daily.

One of the significant implications of the BP Gulf of Mexico oil spill was the loss of jobs (Schnoor, 2010). All those people who were working on the site lost their jobs hence, increasing the rate of unemployment in the country. At the same time, the loss of some employees’ lives while leaving 17 more injured caused lots of panic among survivors. This affected the entire nation emotionally apart from its economic impacts. Another implication is that the physical environment was negatively impacted by this event, affecting the overall economic growth and development of the country. The oil residue spilling on the ground killed vegetation while at the same time causing soil erosion. The livelihoods of thousands of fishermen were ruined, sea animals and organisms were wiped out, and the marshes and beaches in Louisiana, Mississippi, Alabama and Florida were polluted.

The Oil Pollution Act (OPA) of 1990 was enacted by the US Congress to increase the Environmental Protection Agency’s (EPA) authority over the prevention of spills. Due to the 1989 Exxon Valdez oil spill, the OPA of 1990 amended the Clean Water Act of 1972. The OPA of 1990 is among the critical and broad pieces concerning environmental protection. It was passed with the main aim of solving the issue of high levels of pollution through the establishment of stricter standards and regulations (Griggs, 2011).

The OPA strengthened and streamlined the ability of EPA to respond and prevent catastrophic spills. Among the provisions in the trust fund which is financed through taxation, and used for cleaning up spills whenever the responsible parties fail to meet their obligations (Arora & Lodhia, 2017). At the same time, the law requires that all oil storage vessels and facilities submit their plans to the federal government with the details of how they intend to respond towards massive discharges.

The Oil Pollution Act of 1990 has worked effectively to solve the enormous environmental problem. First, oil spills within the country have highly reduced since the Act was passed. The number of spill events reduced from 600 in 1990 to 100 in 2012 (Schnoor, 2010). The benefits obtained from the Act are many as compared to the associated challenges.

Why Did It Take BP So Long to Stop the Oil Spill?

The main reason it took BP so long to stop the oil spill is because they were not adequately prepared nor capable in doing so. It is required by the National Contingency Plan (NCP) that every offshore drilling facility must have a facility-specific oil spill response plan in place, which should be the primary tool when it comes to containing any spill. In the NCP, it references the Department of the Interior’s (DOI) regulations, which establishes the detailed requirements for these response plans. The DOI requires that an oil rig must file with the Mineral Management Services (MMS) for approval of their oil spill response plan.

The response plan overall should demonstrate in detail what equipment is necessary for such an oil spill, the maintenance of that equipment, along with which personnel to contact and the training of such personnel. The response plan is also supposed to be tested and verified via drills and exercises periodically, as well as being properly reviewed and apprised every two years. The rig operator is supposed to distinguish the worst case of an oil spill, the environmental resources that would be endangered by such a spill, and the appropriate steps listed in detail in order to prevent and control a worst-case spill.

Overall, BP’s response plan was insufficient in providing the proper resources to stop this oil spill. BP’s response plan does not identify a worst-case spill and is not specific to any type of environmental incident that could even possibly occur. BP’s response plan also does not describe any steps on how to contain an oil spill, nor does it list the appropriate equipment and personnel. Equipment and personnel were brought together after the blowout and drawn from locations all over the world. The MMS failed to make certain that BP’s response plans conveyed the obligations necessary of its regulations. Because the capability of response efforts were insufficient and inadequate, this is why there was an experienced delay in the containment of the Gulf of Mexico oil spill.

The feedforward management control would have been the most effective to BP in averting the oil spill in the Gulf of Mexico. This type of control prevents problems before they occur. In 2005, there was an oil explosion in Texas City, Texas and in 2006, there was an oil pipeline that ruptured over Alaska’s North Slope all under BP’s management (445). Even though BP made promises to improve, they failed to do so here in 2010.

The oil pipeline is located under the sea and once that is broken, oil surges into the ocean. It is difficult and dangerous to fix where there are immense pressures. By having a feedforward control, this would reduce any chance of a break in the oil pipeline by having preventer procedures in place to shut off the oil flow and in turn, averting an environmental disaster.

It is indeed true that the BP Gulf of Mexico oil spill was a shocking event. However, it took too long to stop the oil spill, increasing the capacity of the problem instead of decreasing it. Lack of being adequately prepared and having the appropriate contingency plans in place are a couple of the reasons behind the slow process in dealing with the issue. Being prepared is key when dealing with environmental disasters. Environmental issues happen without any notice and this demands all responsible parties to always be prepared and fully equipped with the proper environmental resources necessary to deliver timely and quality services when the need arises. In conclusion, it is found that feedforward would work as the most appropriate type of control that would have aided BP in averting the Gulf of Mexico oil spill in April 2010. 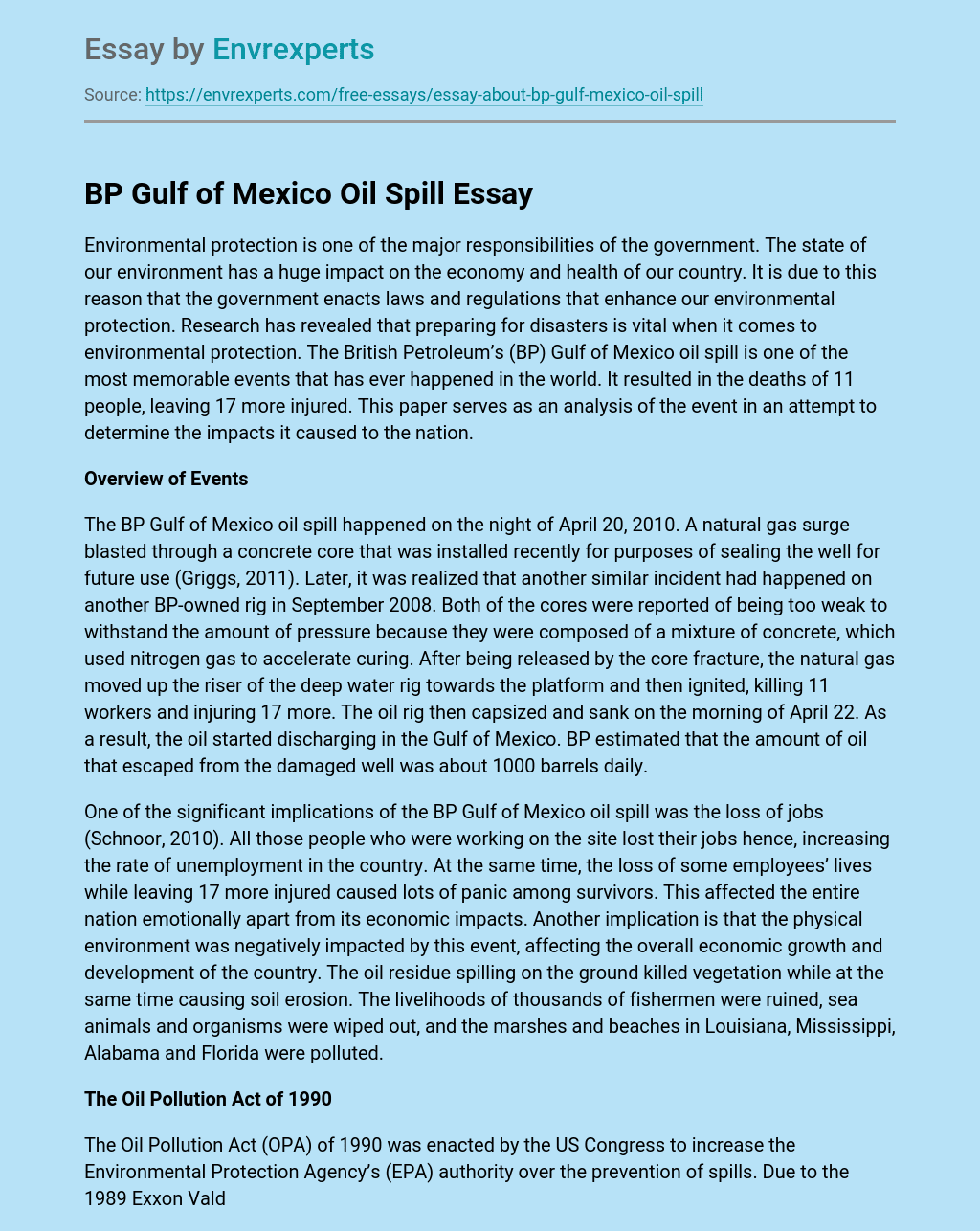