For the past few weeks I have been watching videos on YouTube and reading articles pertaining to the abhorrent event offshore that is formerly known as the BP Oil Spill that happened in the Gulf Coast in April 2010. On April 20, 2010 the oil rig called Deepwater Horizon combusted in to flames. This led to eleven casualties and 115 rescued but they all suffer bodily injuries and shock. Consequently, the platform sinks to the ocean floor and about one hundred thirty liters of oil were leaked out per second and it gradually became a total of four hundred thousand liters per hour.

Don’t waste time
Get a verified writer to help you with The BP Oil Spill: Analysis and Opinion
Hire writer
$35.80 for a 2-page paper

This oil rig has operated successfully without any accidents for seven years straight.

I think that the British Petroleum company, or otherwise known as BP, carelessly sacrificed the workers and inhabitants of the Gulf Coast safety and well being only to make a profit. I come to conclusion because BP and several other contributors did not check for deficient parts on the platform.

There were several problems that needed to be rectified and that were shown shrewd disregard for. According to the documentary on YouTube named “Profit, Pollution, and Deception: BP and the Oil Spill”, three main companies were named accomplices in coherence with the oil travesty in the Gulf of Mexico. These three companies are Halliburton, Houston based Cameron, and Transocean. Halliburton was in charge of all drilling procedures and they proceeded to cover up severe flaws with the system. Cameron was in charge of the blowout preventer that was supposed to prevent the leaking oil but was later deemed woefully inadequate.

Lastly, Transocean was the company that owned the platform and that also laid off a copious amount of workers including Doug Brown who was a chief mechanic.

Doug Brown was interviewed by the Coast Guard, Transocean lawyers and BP. At the time he was not permitted to hire a personal lawyer for this matter. He felt as if this was a part of a grand scheme that was orchestrated by BP because he was pressured into signing non disclosure agreement. Eventually, Brown was able to hire his personal lawyer named Steve Gordon who specializes in maritime law. Transocean leaves him high and dry by not reaching out to him and his family members. According to Steve Gordon, Transocean had filed a claim to limit liabilities to $26 million dollars after receiving $401 million dollars. As you can see that the only people who are being compensated for this disaster are the big oil companies and not the small people in this matter which happened to be the workers. Brown's wife makes a striking argument in that she says “It's disgusting; you can't put a cap on something like that. When there are mistakes made and you're responsible, then you are responsible. If I get into a car accident and I hit somebody, I'm responsible for paying for that other vehicle and the person's injuries.

That's my responsibility as an American, as an adult. And to tell a large multibillion dollar corporation that you don't have to pay that, it's disgusting and it's sad.”

About 4.7 million barrels of oil were leaked in to the Gulf Coast and at the time one fourth of the oil was recovered by emergency platforms. Alabama was one of the five Gulf Coast states that were mostly effected by the spill. They had to created a job in the public sector that was listed as “coast cleanup". This effected the gulf in many ways such as the fisheries department suffered a loss in catch (shrimp, fish, crawfish, etc.) which led to massive layoffs and a significant impact of state revenue also wild animals (aquatic and mammalian) were covered in oil and needed to be cleaned. Another person that the video referred to was Dean Blanchard, a native of Grand Isle, Louisiana. He was a fisherman for twenty-eight years and because of the oil spill, he may never work another day as a fisherman again. His friend and co-worker, Clint Guidry says that BP's goal is to “Kill the ocean and save the beach."

BP sends out planes to spray dispersant chemicals in the Gulf and this will make the oil disappear. However, these same dispersant chemicals are banned in Europe and are only used in the United States due to the laws in this country are not as stringent. The dispersant chemical that is used is called Corexit and four million liters of it is deployed. However, this solution is ineffective because the oil would come back to the top but in different areas. A better idea would be, as former Shell Oil Company CEO James Hoffmeister calls it, “suck, salvage and separate”.

This is a method where pumps would be used to suck the oil out of the ocean, then you can separate the oil from the water. This sounds like a rational idea but BP declined to go on with it and when they finally did go with the idea, it was too late because the oil split in to tiny particles across the gulf.

Corexit was continued to be sprayed in the gulf but it has a very bad consequence that it coincides with. This dispersant chemical is a toxin to humans. According to marine biologist Riki Ott, Corexit breaks apart blood, breaks down blood cells, causes kidney damage, liver damage, blood disorders and kills babies in the womb. Ott states that the scientific community knows that dispersed oil is more toxic than nondispersed oil. In order to keep big oil companies like BP nose clean, they take care of a “public relations nightmare” and take the oil across the surface of the ocean and pushes the oil instead in to the water column. However, on June 15, 2010 a temporary cap was placed on the well head after seven hundred fifty million liters of oil were released.

When this crisis first erupted, I was fourteen at the time and then I realized how big of an impact the oil spill really was. I never looked in to the behind the scenes events that were taking place. I also felt that this really did not effect me but I also felt that it effected a broad amount of people and their families. With this essay and the research that I have gathered, I now know for a fact that this was nothing but a bureaucratic oligarchy taking place in front of our own eyes. We as a region did not effectively protest against the injustices that BP put upon us with the negligence that they upheld. There were several incidences in the first ninety days of the spill crisis that BP could have resolved the problem but they chose not to. One of the cleanup workers were brave enough to stand up to BP and say the following, "Using manual labor and paying people well to keep people quiet so that they can continue to do business so that we don't have a national and/or international boycott of BP." He was brave enough to say this even though he would be at risk for losing his job and the minuscule amount of income that he receives because he was under terms to not discuss about the oil spill.

We are about to encounter the sixth anniversary of the BP Oil Spill next month and I feel as though we still are not done with cleaning up the oil in the Gulf of Mexico, some of those who suffered in the Oil Spill have not been compensated yet and that BP is still withholding crucial information from us. 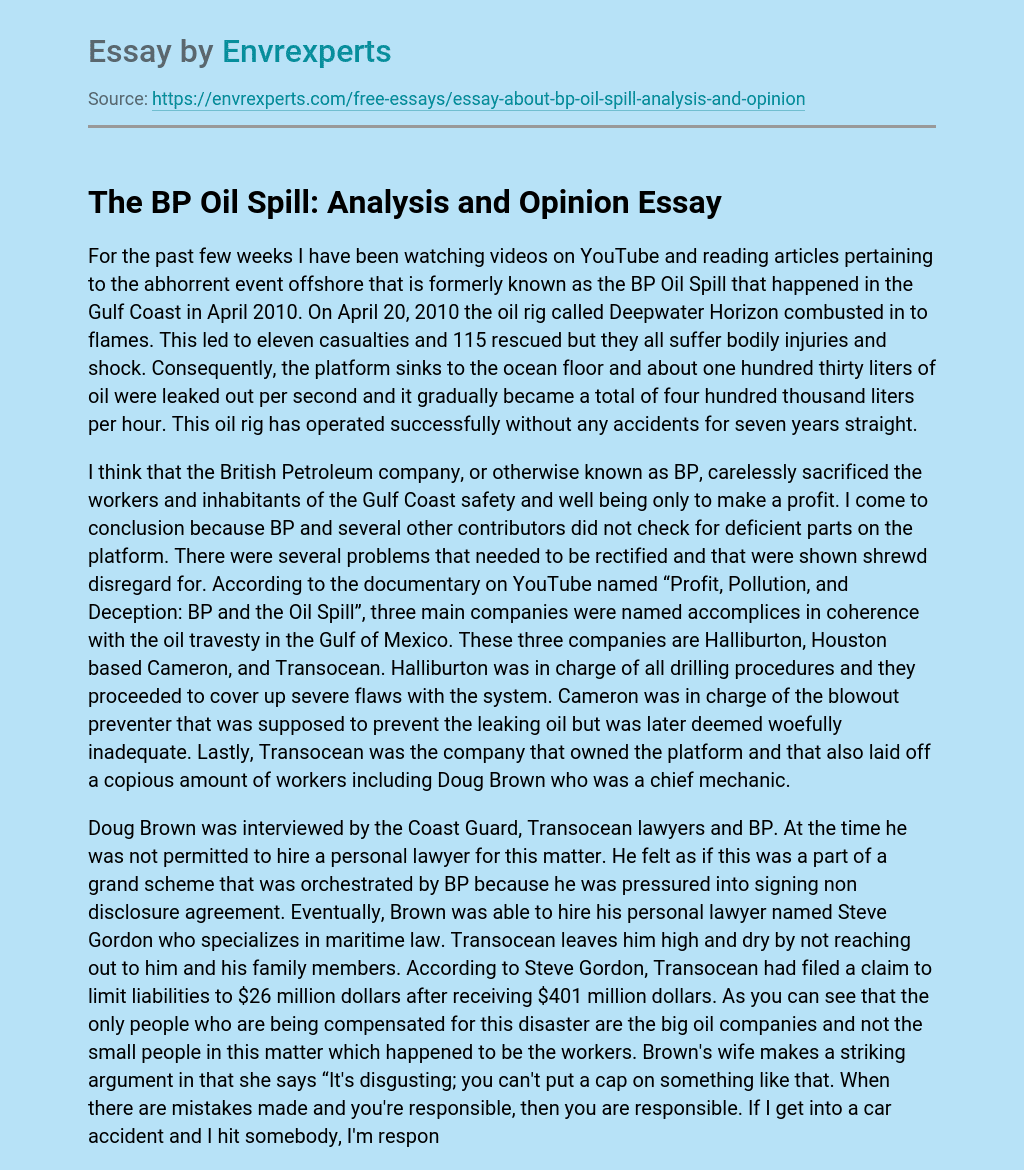