Burning Coal and Its Effect on Global Warming

Coal plays an important role in electricity generation worldwide, as it is mostly used to create power in the world. Coal is first crushed in large factories into fine powder before it is dragged into big steamers, called boilers. Because of the warm temperatures in the boilers, the coal particles combust and burn to generate heat so it can turn water into steam. The steam from the boilers is used to turn the edges of the ventilator called turbine.

Don’t waste time
Get a verified writer to help you with Burning Coal and Its Effect on Global Warming
Hire writer
$35.80 for a 2-page paper

The turbine consists of a coil made out of copper wire which has the rotor and the stator inside, these coils turn and form a generator. The generator forms an electric current which is sent to households and factories through power lines.

EFFECT OF BURNING COAL ON THE ENVIRONMENT

Global warming Climate change Depletion of the Ozone Layer Air Pollution Water Pollution Et cetera CARBON DIOXIDE EMISSIONS Coal is mainly made up of Carbon, hence when it is burned it releases large amounts of Carbon into the atmosphere.

IMPACT OF BURNING COAL ON GLOBAL WARMING AND CLIMATE CHANGES

A discussed above, burning coal releases carbon which then reacts with oxygen in the atmosphere to form carbon dioxide. Carbon dioxide then causes enhanced greenhouse effect which in turn leads to global warming and climate change. Extreme changes in temperature makes people suffer breathing difficulties, headaches, body rashes and other illnesses.

DEPLETION OF THE OZONE LAYER

The greenhouse gases released when coal is burned causes the Ozone layer to become thinner as these gases cause it to degenerate. The ozone layer is made up of oxygen gas Oɜ (g). The ozone layer degenerates when the carbon released undergoes chemical reactions with the oxygen gas to form carbon dioxide and hence the oxygen content in the ozone layer decreases and the ozone layer becomes thinner. When the ozone layer is destroyed more Ultraviolet rays (UV) from the sun are able to penetrate and hit the surface of the Earth. Increased UV light rays on the Earth’s surface are threatening to human health and in the long run cause many disorders which include different types of skin cancers, eye cataracts, immune deficiency disorders, etc. UV rays also have a negative impact on plants. Because of the increased UV light rays’ plants loss nutrients and water which affects their ability to grow. The death of crops also negatively impacts on the Agriculture industry and hence this leads to a decrease in crop yield and food insecurity. effects on the marine ecosystems. Increased UV radiation increases the evaporations of water and hence rivers and dams lose their water content. When water in rivers and dams is reduced the ecosystems become threatened because they depend on water to survive and when it is destroyed it affects their habitats and then the plants and animals of that habitat die out leading to a loss in biodiversity.

Solar energy power Solar energy refers to capturing heat energy from the sun and convert it to electricity. how solar energy power work Firstly, solar panels need to be mounted on top facing the sun. During the day sun rays strike solar panels and they heat them, and this creates direct current (DC) electricity. DC power will be transported to the inverter, then the inverter converts the direct current (DC) to alternating current (AC). Then the inverter will feed AC power to circuit boards and this ready for any electrical loads in the house.

Firstly, there is a steady drop in solar panel prices which is good for the economy of our country. The countries hot weather conditions favour the use of solar panels Most parts of the country experience an average of more than 2500 hours of sunshine per year. So yes, solar energy is very suitable for South Africa and it is sustainable in the long term. wind energy Wind energy involves the use of wind to provide mechanical power through wind turbines to turn electric generators. Wind energy has a smaller negative impact on the environment compared to burning coal. It is a use of wind turbines which are made up of a propeller, rotor, shaft and a generator to create electricity. Is Wind Energy Suitable for South Africa? For a very long-time people use windmills to pump water and to grind corn which is a proof that South Africa has a wind potential. Wind energy works effectively in windy areas. Of which South Africa has coastal areas of Western and Eastern Cape. Advantages and disadvantages of wind energy The main advantage of wind energy is the unlimited resource of wind. This emits no air pollutants or greenhouse gases. It is more eco-friendly. Maintenance of turbines does not cost too much but they cost next to nothing. And the major disadvantage of wind energy is initial installation which is very expensive and secondary technology immaturity.

Burning Coal and Its Effect on Global Warming. (2021, Oct 31). Retrieved from http://envrexperts.com/free-essays/essay-about-burning-coal-and-its-effect-global-warming 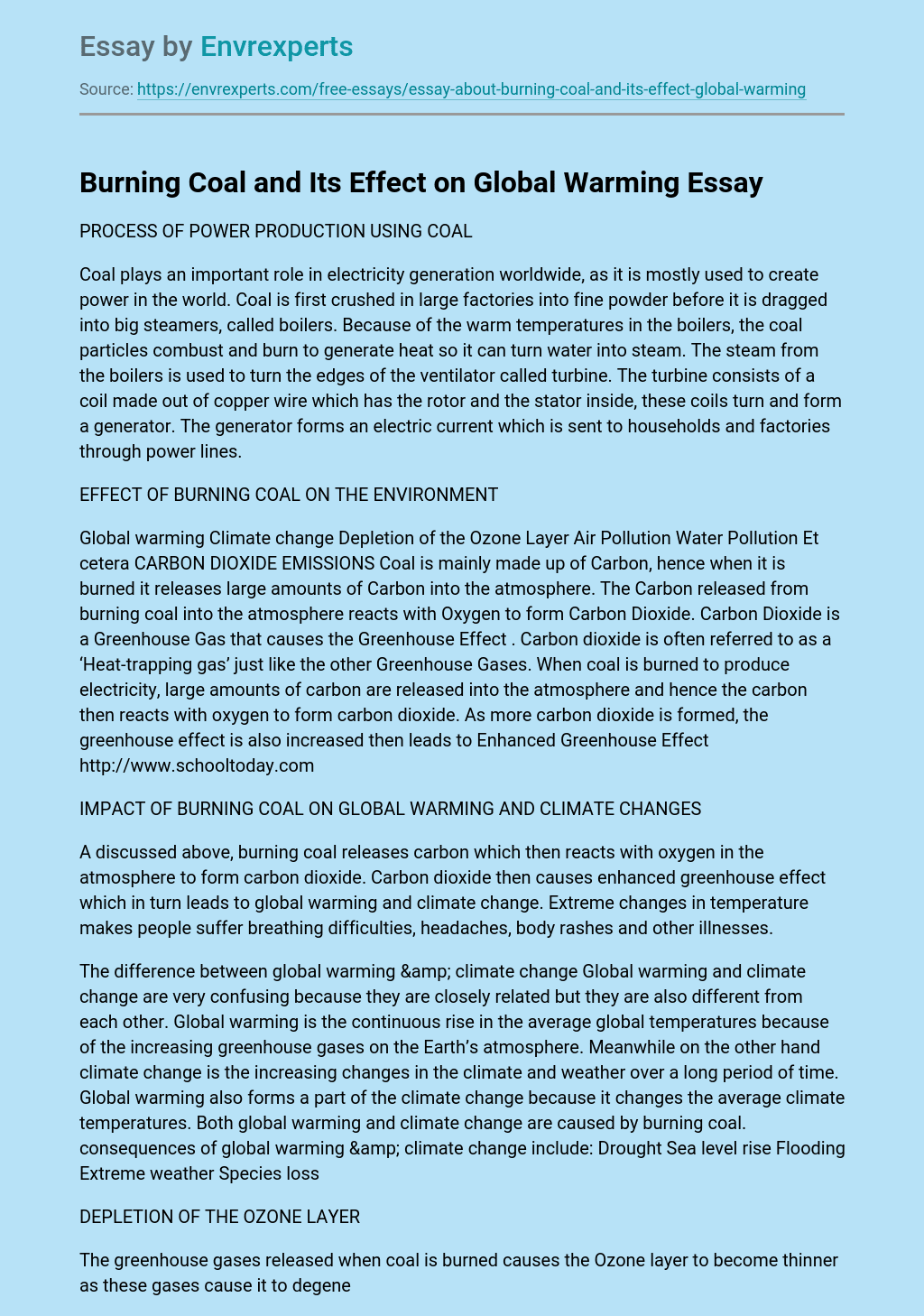