Bushfires and It`s Impact on Environment

Bushfires occurs very rapidly in many parts of Australia and cause a several damage to homes and to the regions of that particular place and also to the nearby place of that area. Blazes are the one of the prominent factor that is being considered as a main factor that cause bushfires and destroyed several communities and also a lot of loss to the infrastructure. But, now the question arise how bushfire starts so, basically main components of fire are oxygen, fuel and heat.

Don’t waste time
Get a verified writer to help you with Bushfires and It`s Impact on Environment
Hire writer
$35.80 for a 2-page paper

When the temperature is high and humidity in atmosphere is low then the chances of spark fire are maximum. Mostly plants in Australia contain oil that increase the chances of fire. This review paper focus on the circumstances on why these storm occur and examine how to manage this.

Canberra bushfires Canberra is a capital city of Australia and the place where people like to live because of occurrence of a lot of bushes and grass over here.

First and foremost, firestorm occur on 18 January, 2003, at the speed of 30km/h and destroyed 500 residents and 4 people1. Victorian Bushfires The fire storm in Victoria was the worst storm or tornado in the Australia on 11,February, 2009. In this storm more than 180 people died and around 780 homes were destroyed. After this storm a, thousands of people were homeless who were helped by the Australian Government. This day was also known as black day in Australian history2.

It was considered as black Christmas and boxing day for Australian people this year. Areas like, blue mountain and Hawkesbury also faces a lot of circumstances under firestorm3,4.

Seasons of bushfires also fluctuate according to the area like in north part of Australia fires happen in Spring and winter; however, in south part January to May are the most protuberant seasons5,6.

In the recent years, Australia has experienced low rainfall and a long term dry condition. There are some analyst, who insist that drought are the one of significant factor beside this; however, high temperature was also the main factor regarding increment in fire storm each year. Secondly, land clearing was also the reason behind rise in fire frequencies. Australia is one of driest country because of less rainfall. Over the past 30 years, there was a sharp decline in rainfall in south west part of Australia that is 15% in the winter. Temperature is rising every decade from 1950 and that may results in low humidity too6,7.\n There are two prominent types of bushfires: Surface fires: These type of fires have low and high intensity and always burn on ground but this fire approach to trees very rare only when flames from the earth surface ignite to crowns of a tree. Crown bushfires: this kind of fire spread very quickly with hind speed of wind on dry area7.

5. Effects of bushfires on climate

Ocean temperature and sea level rise: Due to bushfires, climate of Australia is getting worse day by day because of rise of greenhouse gases in atmosphere, with this marine life of animals was also in danger. Surface temperature of ocean have revealed rise by 0.9oC since 1901-20, which is higher than the average global temperature by 0.70C. Southeast and southwest are the two regions that has greatest warming8.

Change in Biodiversity : Bushfires exaggerated the life of flora and fauna , typically in montane and coastal habitats. For instance, in southwest there were 100 Bansika species, but now they were declined by two third and only 6% are stable. Due to rise in storm and changes in ocean acidification. Sea grass is affected by mangroves at coast side. This destroys the biodiversity and engender smoke in environment which may further lead to several health problem due to emission of CO2 in environment9.

Agriculture: Due to climate change agriculture system of Australia faced a lot of crisis. As we have seen earlier that a temperature is rising day by day and due to this issue rainfall occur very rare and that will affect crops more than livestock. Because there are some crops that need a lot of water like rice, but due to high temperature water resources are fully consummated and that is a biggest problem that people are facing in southeast and southwest region of Australia10.

Health problems: There are many health effects of breathing Carbon monoxide(CO) and other fumed gases that released when bushfires occur that is disturbing air quality of the atmosphere. People who works near to the fire areas are prone to health related problems like unconsciousness and faintness and further this lead to risks like trauma. There are some long term effect of breathing CO such instance depression, post-traumatic stress disorder and sometime fatal heart attack11.

6. What steps can be done to manage fire for Ecosystem and climate health

Bushfires occurs very frequently due the a wide change of climate so to protect the environment there will be rise in fire fighting resources and health services. Furthermore, an urgent action to resolve the problems of climate change by dropping Australia greenhouse gas emissions. Government of Australia should find an alternative way to resolve the problem of bushfires that is less expensive and easy to control the fire so that there is no effect on GDP of the country. This can also be done with the help of planting trees that do not contain oil. We need to understand that fire not only effect human lives but also effect the flora and fauna of that country due to which there is a lot of loss to biodiversity12.

Bushfires or wildfires are the main component of Australia, but, the country needs to take a lot of prevention like it is rightly said that prevention is better than cure. Therefore, the government need to make a feasible management laws that could help to reduce the risks of fires and also support to protect the atmosphere

Bushfires and It`s Impact on Environment. (2021, Oct 31). Retrieved from http://envrexperts.com/free-essays/essay-about-bushfires-and-its-impact-environment 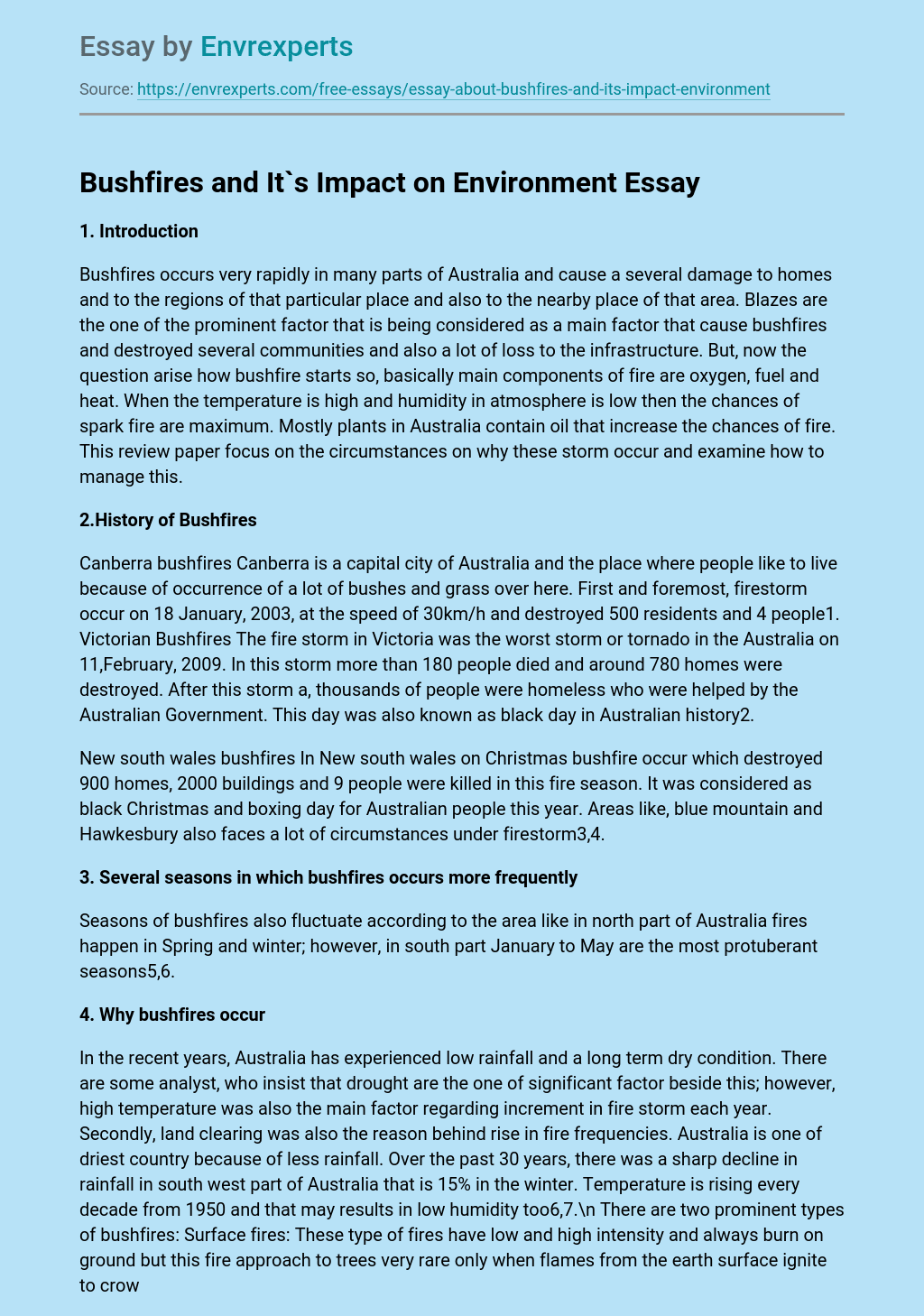