Carbon Dioxide And Its Role In The Greenhouse Effect

Don’t waste time
Get a verified writer to help you with Carbon Dioxide And Its Role In The Greenhouse Effect
Hire writer
$35.80 for a 2-page paper

"Greenhouse gases" are so named because they trap heat near the earth'ssurface, and prevent it from being radiated back into space. With too fewgreenhouse gases, Earth would be too cold for life, and with too many, it wouldbe too hot. Man's activities are changing the concentration of greenhouse gasesin the atmosphere, and there is concern that this may significantly change theclimate.

Carbon dioxide is a greenhouse gas, second in importance only to watervapor. Other pollutants such as methane and CFC's (chlorofluorocarbons) arealso greenhouse gases.

Is the Greenhouse Effect Increasing? There is no doubt that the concentrationof some greenhouse gases is increasing. For example, carbon dioxide hasincreased by 25% in the last 100 years, and continues to increase rapidly. Whatis uncertain is whether the altered greenhouse effect has changed the Earth'sclimate. Some scientists believe there is data indicating that the Earth'sclimate has already warmed; others feel that there are too many other causes ofvariation in temperature to be sure that temperature has changed, or that anincreased greenhouse effect is responsible.

How may the climate change? Predicting climate is extremely complex, and thereare many uncertainties, such as the role of clouds, and effects of otheratmospheric pollutants such as sulfur dioxide. As carbon dioxide concentrationincreases, many global climatic models predict an increase in averagetemperature of as much as 10 degrees F. Patterns of precipitation may change with some areas becoming wetter and some drier. The frequency of extremes of weatheris also predicted to increase.

What is the role of agriculture? The agricultural industry influences thegreenhouse effect by contributing to changes in vegetation (deforestation andreforestation), in the amount of carbon stored in soils, by consuming fossilfuels, and by being a significant source of the greenhouse gas, methane.

What is the possible impact on agriculture? While the direct effects ofincreased carbon dioxide on plants are mostly positive, climate changes couldhave negative effects on agricultural production. Temperature and precipitationdetermine what crops can be profitably grown in different areas. Extremes ofweather can be disastrous to agriculture and to food supplies.

The carbon cycle is based upon carbon dioxide. Most of the carbon is found in the atmosphere (about 0.03%). The carbon cycle has a very fast rate of recycle because many organism have a high demand for the carbon. These organism are plants, bacteria, and algae (phototrophs and lithotrophs ). The reason for this need is their photosynthetic activities of these organism. It is these photosynthetics activities that results in carbon fixation. The organism that do this fixation are the photoautotrophs like cyanobacteria, green plants, and algae, and green and purple sulfur bacteria.

All heterotropic organism; some bacteria, protists, fungi, and animals do not have the ability to photosynthesize. It is for this reason they must obtain their carbon indirectly from organism that can fix it. The heterotrophs consume these photoautotrophs the organic compounds are digested and resynthesized. The carbon atoms are transferred from organism to organism, up the food chain.

* Carbon fixation or Calvin Cycle: The cycle of incorporating carbon dioxide from the air into organic molecules present in chloroplasts. The initial incorpation of carbon into organic compounds (carbon fixation). The Calvin cycle then reduce fixed carbon to carbohydrate by addition of electrons. This reducing power is needed to energized electron in the light reaction.

* Light reaction: This is photophosphorylation the production of ATP by photosynthesis.

Carbon Dioxide And Its Role In The Greenhouse Effect. (2021, Oct 31). Retrieved from http://envrexperts.com/free-essays/essay-about-carbon-dioxide-and-its-role-greenhouse-effect 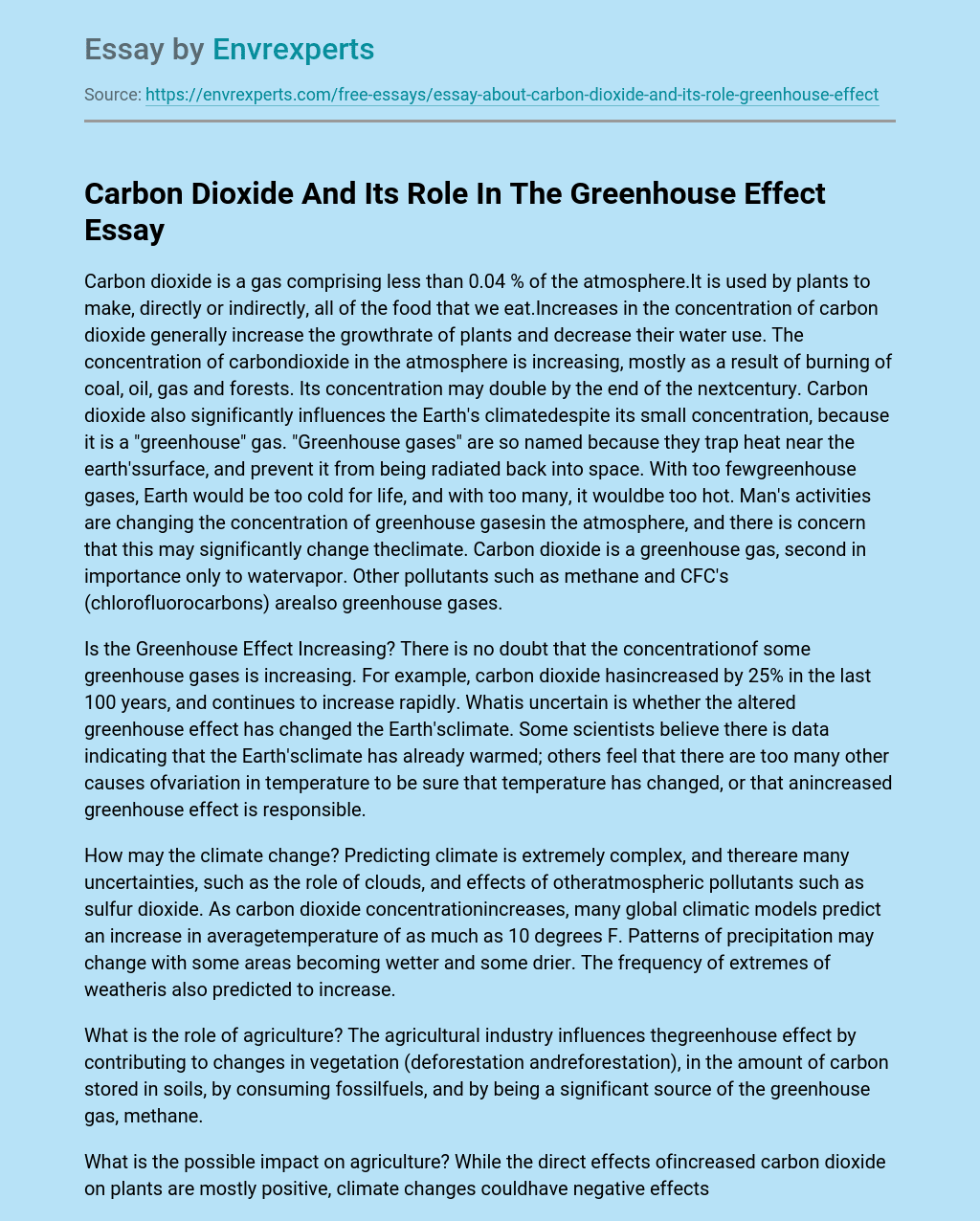