The Greenhouse Effect is described as the heat trapping mechanism that radiates fromgasses across the Earth's atmosphere. Without the Earth's surface being heated up by this phenomena, it would be a cold place to live (National Research Council, 2010). While it isessential, the concern is that anthropogenic causes lead to unprecedented amount of heat isbeing trapped in our atmosphere, the scientific evidence of changing the global climate atunprecedented amounts is no longer up for debate. In terms of the importance of this topic toconservation biology: if humans don't make appreciable effort to reduce impacts, now, thecurrent options will be more difficult to implement later.

Don’t waste time
Get a verified writer to help you with Carbon Emission to Prevent Global Warming
Hire writer
$35.80 for a 2-page paper

Governments can control humanactivities at a larger scale than they can environmental flows, and as such the propergoverning solutions toward human activity should be implemented to see through thesuccessful impact on the environment (Reyes & Gilbertson, 2010).This being an issue for human and ecological sustainability is no longer up for debate,as consequences of rising sea levels, cost of losing essential ecosystem services becomeapparent, actions to reduce and alter behavior are necessary now more than ever (Stavins,2008).

It is not compelling that dominant source of emissions and contributor to theGreenhouse Effect is carbon. The U.S alone contributed over 1.46 million metric tons ofcarbon in the atmosphere second only to China, the majority of it due to burning fossil fuels(Quéré, Peters, Andres, Andrew, Boden & Ciais 2013).

The controversial nature remains inthe effectiveness of the programs implemented to reduce emissions.The Kyoto Protocol is the most notable international effort to reduce emissions, but itfell short on garnering support from major polluting countries but these countries are makingmoves in the right direction on their own (Kollmuss, Schneider, Zhezherin, 2015).

Thediversity of ways in which energy is supplied and used such as transportation provides ampleopportunities to reduce energy-related emissions. Two examples are Carbon credits, or setting a limit and offsetting emission impactsthrough other reduction activities is one way to reduce emissions. This method recognizes theinevitability of pollution and provides incentive to act in order to reduce impacts (Wara,2007). The Intergovernmental Panel on Climate Change (IPCC) is an institution of scientiststhat recognizes these players in determining how to pursue carbon and other pollutionsemissions providing a balanced view respecting environmental and economic needs. Theother method is carbon sequestration to achieve the removal of carbon dioxide in ouratmosphere by injecting them beneath the earth or by planting forests for long term storage(IPCC, 2014). For all methods, achieving reductions faces because it involves considerationsof human behavior and preferences, economics; multiple time frames for decision makingand results (National Research Council, 2010), the myriad stakeholders seek make it difficultto project future sustainability.Ultimately engaging in carbon reduction practices will increase the price ofnonrenewable energy, reducing consumption and jobs for lower wage earners in thoseindustries (Bauer, 2013). This is an important sector of the economy especially in the U.S,China, India in the E.U, and other industrialized nations. As a result, politicians areunderstandably hesitant to actively pass legislation to protect constituents and interestsgroups and seek to provide sufficient time for the industries to adapt to policies (Shaffer,2010).

The E.U is the exception to the rule because they are continuously aiming toward alocal European objective of lower emissions and they enjoy the health related benefitsindirectly provided, not a global one. E.U's policy and other nations' lack thereof highlightshow government activity plays the largest role on curbing emissions. Since the air we breatheisn't limited to a geopolitical area, governments are responding to reflect their concern for thehealth of their people, first (IPCC, 2014).By creating an artificial market where some permits are freely given and others aresold, proponents claim that this solution is the most efficient for businesses and willguarantee the most measureable results (Kollmuss, Schneider, Zhezherin, 2015). This bodeswell for large fossil fuel and natural gas producers who can both reduce emissions and earnrevenue in the form of credits for future use. Consequently, the question in managementmethod comes to play. In Russia and Uzbekistan, carbon emissions rose 2.3% as well asincrease in harmful pollutants that weren't included in their plan. This is perceived as a flawof the plan, sustainability requires an overall approach, and offsetting a large quantity oneharm for the opportunity to increase the use of another do not neutralize each other.Environmentalists that disagree with cap and trade leave a wide margin for corruption, anexample being the Russian and Uzbekistan initiative which actually lead to more pollutionbeing produced.In the U.S, the Environmental Protection Agency under the Clean Air Act has beencharged with developing pollution regulations to protect human health and then theenvironment.

The argument has been made by Energy lobbyists that reducing carbon and itsbyproducts emissions have resulted in job loss, and has not helped clean the air (Wara, 2007)has little merit, considering that better health and innovation achieved by increasing standardsfor efficiency and controlling for carbon and other pollutions after regulations implementedsince the 70s resulted in a net benefit to the growth of the economy overall (Stavins, 2008).Developing countries, business people, free market economists and politicians whoare hesitant to apply emissions control are primarily concerned with the method, the cost, andthe effectiveness of controlling emissions. Countries that do not have infrastructure to track,reduce, and continually monitor must import the methods or rely on international support todo so (Reyes & Gilbertson, 2010). To counter the argument that these economies cannot be competitive is to ask them to reconsider what valuable resources they can capitalize tomaintain the integrity of their air quality with renewable energy.What can be done, in the U.S, is follow local examples while the federal andinternational actors catch up. Theirs is a combination of cap and trade incentives that hasresulted in a net reduction of carbon emissions and revenue to fund further research anddevelopment of renewable energy and emissions reduction. Schaffer looks at the effect oflong-term implantation of a carbon emission reduction program, the analysis reveals that suchtaxes would generate revenues equaling $21 trillion to $32 trillion by the end of the century(Schaffer, 2010). That translates to a net economic benefit of around $20 trillion, in additionto potentially staving off the worse impacts of climate change and providing citizens withcleaner air and water. The profits from carbon taxes are being used for green-energy projectsand climate adaptation efforts.What I think needs to be done and a lot of people agree up is something morepowerful than government setting limits on industries and pollutants. No doubt, if regulatorybodies did not set standards for pollution, they would not be lowered as they were. The largerthe scope of the governing body, the more difficult it is to manage as corruption andcommunication of objectives become blurred. In the U.S, the current subsidies for oil andnatural gas are too significant to diminish the value perceived by the public in reducingcarbon heavy utilities (Lazo, 2014). 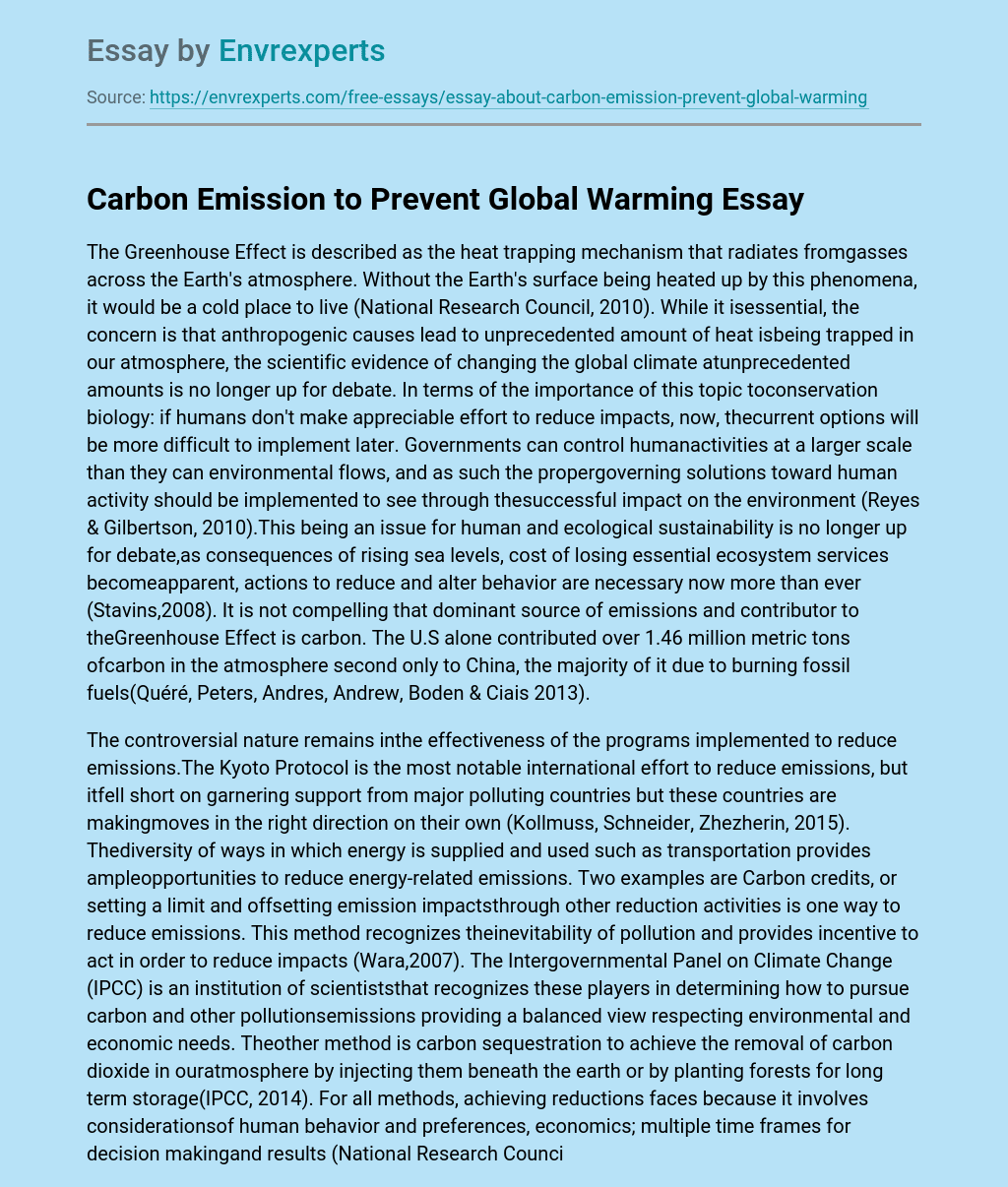