Home furnishings manufactures in India offer a spectacular range of bed linen, table linen, kitchen and bath linen, furnishing fabrics, curtains, rugs, durries, carpets, made-ups and other home furnishings accessories. India Comes under the world`s biggest producers like Welspun who is the third largest towel producer, Trident who is largest terry towel producer and Bombay Dyeing and manufacturing Company ltd (Wadia) is one of the top textile companies in India.

Growth of home textile market is moving very fast. In India, one can see a rapid shift from lower middle class to the higher middle class, and in future it is expected to the growth of a niche ‘Super-rich’ class.

Don’t waste time
Get a verified writer to help you with Category of Textile Industry
Hire writer
$35.80 for a 2-page paper

But sustainability is becoming a major concern in the industry as a whole, while customers and companies alike working toward environment friendly practices and products.

According to Techno-pak Advisors, (2011) The home textile Industry in India is estimated to be Rs 17,000 crore and is growing at over 9 per cent annually.

Bombay dyeing knows that a strong legacy does not provide the best outcomes always. And in today`s world no brands wants to loose its customers. Bombay dyeing, the flagship brand of the textile, reality wadia group, led by nusli wadia.

He along with its board of directors led out a new ad campaign, which mainly concentrated on giving a new and improved form by giving a new look to their stores by adding fluorescent colours to increase their in-store experience. It has set its sights on the new-age homemaker.

Earlier the bed sheets, pillow covers were characterized by pastels and flower prints are coming out as poping of bright colours.

Even the management thought that they have lost touch with evolving customers. Bombay dyeing, who is 135 year old brand thought to connect with young customers which is backed by customer survey who thinks that the brand is not for young shopper who is modern or progressive. Recently it has introduced Neon pops which adds to the latest collection in soft furnishing. The management of Bombay dyeing realized this mistake very late and said that they have been silent for far too long.

This Neon pops will catch the attention of young customers, so targeting the entire new age group and income group, shifting from lower middle class to higher middle class. Thus having a wide range of products which will cater to most of the groups in India. They also analyzed that people in India do not walk to store to buy home furnishing anymore.

They shop along with their other shopping needs in mega stores, malls and at departmental stores. Bombay dyeing stores are present all over these places but back in their mind they are ensured that they are out of the mind of new-age homemakers. Also nowadays the trend of buying everything online, as an effect on Bombay dyeing, so in return they have also came online and double their advertising spends.

It has launched seven collections in the year 2014 to target men, young couples and so on. Before also they have tried to get into the minds of younger customers and infuse youthfulness into the brand. It had also tied-up with designers like Anita Dongre, Wendell Rodricks, Sabyasachi Mukherjee to launch collections but always been prices at a huge premium which according to Indian consumers is not appropriate because consumers in India would not spend more premium in textiles.

But this time it is also overhauling the stores. Though it has biggest network of Home furnishing stores, many of their stores lack the look and feel of modern store, also their customer services is average and right merchandising mix. Previously retail contributed 7% of company`s overall sales and after opening new stores in last 1 year, the change in retail reached 14-15%. In today`s world, consumers in India do not buy whatever they felt like. Now whey somebody buys a bed-sheet, we can help him with Co-ordinated towels, rugs etc.

According to them, new stores is the key to increase in their sales. Because they have not only given an edgy look to their stores but they have also decided on changes regarding the price. They have 350 stores, which are franchised, but they are now targeting to add about 40 company-owned stores and targeting mainly metro cities i.e Mumbai Kolkata and Bangalore.

Bombay dyeing is mainly focusing on new-age shopping destination- online portals. Apart from selling on Amazon, Flipkart, its own sites retails 1500 designs. Online sales have grown month on month, at 15-20 percent, so they should focus more on online portals rather than stores. Also On of the main competitor Welspun Retail, a part of the welspun group, has shut most of its home furnishing stores named Welhome, so this can be consider as a great opportunity to increase their reach. 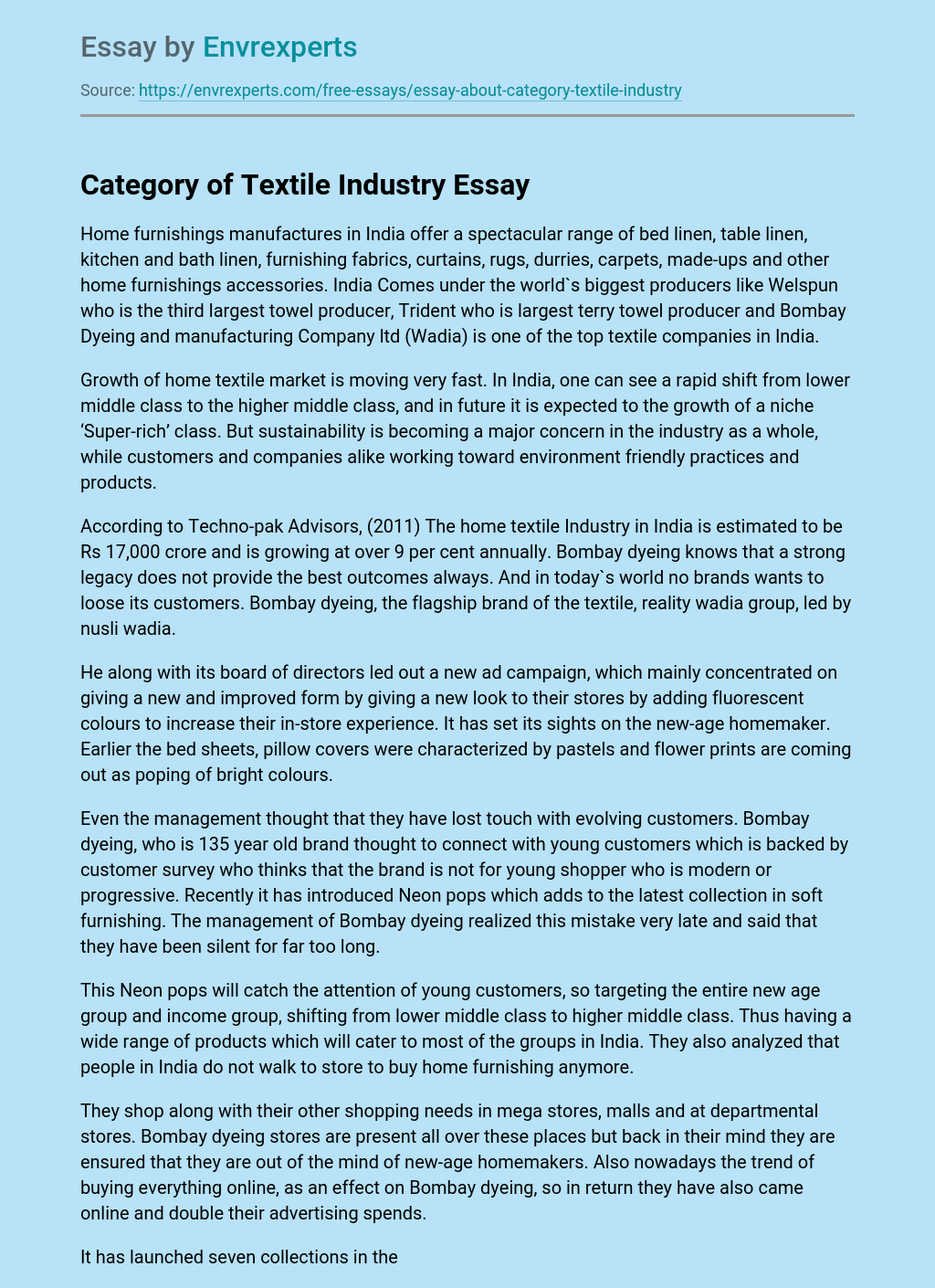