Cause and Effects of Global Warming

Global warming is one of the biggest issues the world is facing nowadays. It is a problem that people need to start looking at more seriously because it brings the world's society a lot of problems in the long term. It is a problem that gets brought up more and more often these day, and there are reasons for that. Scientists keep discussing the effects of global warming, as well as predictions and actions that people need to take to decrease the speed of the climate change, but there is a lack of extreme measures that will eventually diminish global warming.

Don’t waste time
Get a verified writer to help you with Cause and Effects of Global Warming
Hire writer
$35.80 for a 2-page paper

Many scientists have given their opinions and ideas about the concept of climate change and whether it is "big deal" or not. Global warming is the rise in the average temperature of Earth's atmosphere and oceans. Warming of the climate system is obvious, and according to scientists it is primarily caused by increasing concentration of what they are called – greenhouse gases produced by anthropogenic (caused by people) activities such as burning of fossil fuels and deforestation.

There are still some people who don't believe in climate change and its importance but I do believe that this is something we should take care of as soon as possible because as countries are getting more developed and industrialized, the speed of the climate change is increasing. The reason I think that way is the decrease in the abundance of glaciers, the floods caused by rainfalls in some areas on the Earth, the lack of rain in other areas which causes droughts and loss of agriculture, and the loss of habitat.

Extreme measures need to be taken as soon as possible but there are multiple reasons they haven't yet been taken. The first reason is that in order for global warming to be stopped, countries need to slow down their economic development, which I think is impossible. The second reason is that some people make a lot of money out of global warming harms. The third reason is that countries don't want to unite against this harmful cause, and come up with an idea that everyone will be satisfied of, and not harmed by global climate change. Although, the causes of the lack of extreme measures are ones that people know about, there hasn't been done a lot for preventing the increase of the global climate change because people either know that in order for them to diminish it, countries need to stop developing, or they make a lot of money out of it, or they just don't care.

The loss of animal habitat is a huge issue related to global warming, and it is a proof of how countries don't do anything major about the diminishing of the global climate change. Animals display the evolution of the world, and the different stages it has gone through, starting from its creation until today. They are a part of the world's history, and by losing those species we lose parts of our history. I've always been interested in watching documentaries about different animals that have existed ages ago… But I've always been more interested and excited when I go to the zoo and see animals that are near extinction because I know that the next generation might not be able to see them. Animals such as the Giant Panda, the Cross River Gorilla, and the Polar Bear have always been the ones that have excited me the most. For most people, it is familiar that the Giant Panda is native to China, the Cross River Gorilla is native to Nigeria, and the Polar Bear to the Arctic, so if one day those species extinct from the world's surface, those countries/regions are going to lose a big part of their history. I watched the National Geographic Channel the other day, and there was an infographic that showed that the Polar Bear got very close extinction because of the climate change and the decrease of sea ice.

Another big issue nowadays is the carbon emission which is the most accurate proof of the economic development of countries – something that in my opinion cannot be stopped. The main human activity that emits carbon is the burning of fossil fuels – coal, natural gas, and oil. We use them for energy and transportation in our daily lives. It is well known that a large percentage of all of the greenhouse gas emissions in the U.S. come from human activities, such as burning fossil fuels to generate energy. Carbon emissions have a very high impact on the world that we live in today. The Earth gets warmer which contributes differently to different areas. Some areas welcome warmer temperatures, but others don't. On one hand that leads to the melting of glaciers and increasing the sea level, but on the other hand, it leads to droughts because of decrease of rainfalls. The increase of CO2 in the atmosphere and the higher temperatures may cause the loss of agriculture. They can change the areas where the plants grow best and cause an economic crisis because of the lack of specific crops and plants. On the other hand, the rainfalls at places are not supposed to get rain, or at least not a lot of it, are the proof of the fact that there are always people that would try to make money even if it is about harming other people in the process of getting it. An example for that is the hard work of fruit-and-vegetable-growers whose sweat under the sun, growing those fruits and vegetables, goes unnoticed. They face the competition of producers who genetically modify different kinds of food, and get "beat” on the world's market. The GMO foods need much less time to grow, and be ready for consumption, so the producers of that type of food get to grow it way more rapidly than the others, therefore they get way more money than their competitors – the honest growers. According to my mom, the 21st Century world is a material world. People are not the same as people 30 years ago. They pay more attention on things that are less important. Money and fast cars is all that matters to some people. Everybody has their own car, and some people even have multiple. Those who have enough money can afford it but they don't think about the environment. They don't think about the damage that they are going to cause to the environment by simply driving their new fast cars around the city. They don't realize the importance of this issue. For them that's just driving, but for the people who do realize it, and for the people who care about the global climate change, that is called burning of fossil fuels. They are polluting not only the environment but also the people and the animals because we are all a part of the environment.

It's time for people to start looking at their actions and realize what's right and what's wrong. It's time for all of us to realize the importance of this issue called global climate change, and start looking for possible ways to decrease its speed, and eventually stop it. Every action of ours defines us as who we are, and we are the only ones who can define ourselves. It's time to stop putting people's and animal's lives in danger, and start living better lives. Every day on the Earth is a blessing, and we should appreciate everything that comes with it. The Earth is our home, so why not take care of it and make it a better place!?

Cause and Effects of Global Warming. (2021, Oct 31). Retrieved from http://envrexperts.com/free-essays/essay-about-cause-and-effects-global-warming 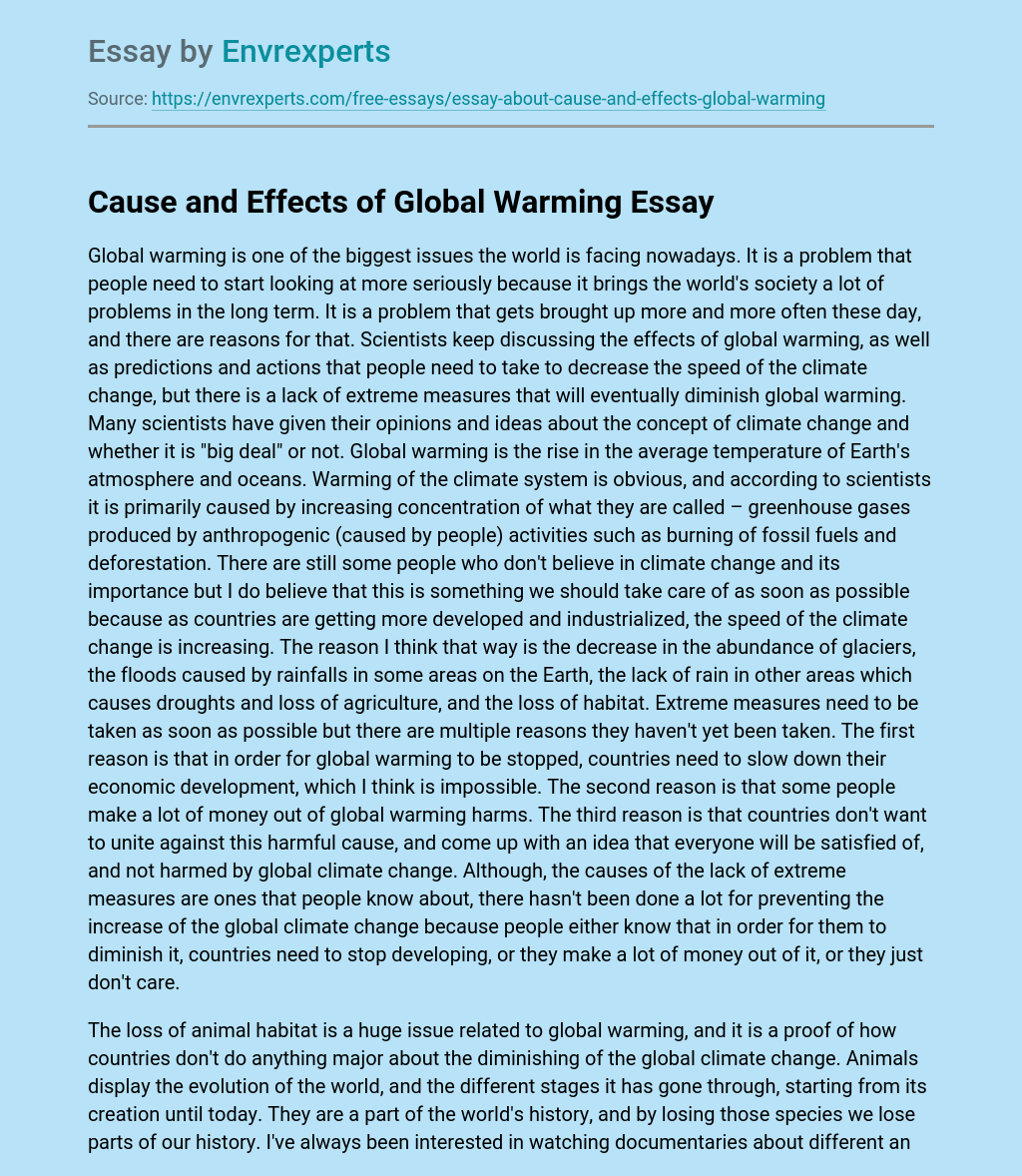