Causes and Consequences of Environmental Injustice

Environmental “injustice” reflects the reality of vulnerable communities being subjected to unfair treatment of pollution in the area.

This injustice stems from the overall financial situations of communities along with their nationalities.

The major factors which tend to feed into environmental “injustice” are based on the income of the residents in the community, race, and overall cost of living in the neighborhood. It has become apparent these factors correlate with the rate at which cleanup occurs in a community, including the efficiency of the cleanup process.

Don’t waste time
Get a verified writer to help you with Causes and Consequences of Environmental Injustice
Hire writer
$35.80 for a 2-page paper

One of the communities in the city of Chicago which struggled for environmental justice is Little Village. Little Village began as a suburban community at the edge of the city following the Great Chicago Fire of 1871 (Kern, Leslie, and Caroline Kovesi). It was after the recovery from this tragic event leading to the expansion of railroads and canal networks surrounding the area, bringing in heavy industry and new jobs. This overall increase in industrialization in the community led to opportunities for those seeking work. It was by the twentieth century that the rate of Mexican immigration to Chicago increased as nation-wide labor shortages spurred demand for agricultural workers (Kern, Leslie, and Caroline Kovesi). The increased immigration occurring in the city caused Mexican residents to slowly be pushed further towards the Lower West and Southwest side (Kern, Leslie, and Caroline Kovesi). Although some families with more resources were able to move a little further west to more pleasant venues, other families who were not as fortunate were forced to stay. The overall forced migration occurring within the city of Chicago led to Little Village having thirty-three percent of its residents living under the poverty line, with housing conditions being the most overcrowded in Chicago (Kern, Leslie, and Caroline Kovesi). These factors of racism and low-income in Little Village’s history led to the community becoming the victim of environmental “injustice” in Chicago.

The sites for dumping garbage in Chicago have a trend of being dictated by economic and racial values. The values placed on certain communities with low-income and high minority rates has led to the dumping of waste products in the areas, leading to residents facing environmental “injustice” in their place of residency. In a study done by Pellow on the distribution of garbage in Chicago, he uses the past evidence in the 1980s to relate how construction and demolition dumps were established in many minority communities (Glenn Harris). The historical analysis done by Pellow led to him producing the term of movement-policy cycle. The cycle states community opposition following the introduction of a new waste regulation or technology, government or industry, producing strict responses to regulations or technology, which tributes to community resistance (Glenn Harris). This cycle has been placed within different communities in Chicago causing the unfair treatment of different communities. The result of these garbage wars in Chicago led to power struggles between social movements, government, and industry over waste management, along with payments and cost of these management facilities (David Pellow). The resulting “garbage wars” in Chicago stem from the differences between social dimension of recycling in the city and the dominating large-scale recycling facilities (Barr 279-280). The reason these recycling sites contribute to the environmental justice in Chicago is due to location. Although these sites provide a public environmental good by ridding the area of garbage and providing a greener atmosphere, the sites also end up being seen by the community as an injustice (Barr 279-280). Recycling is usually seen as a positive when looking at its effects on the environment, but the working conditions for these recycling sites in Chicago are harsh, causing health and safety hazards (Barr 279-280). The resulting hazards from these facilities are highly located in communities with high ethnic backgrounds and those on the edge of societies threshold (). It is from these facilities that the communities in Chicago have suffered from environmental “injustice” from the location of these sites. The result of these sites has led to areas in Chicago suffering from pollutants being dispersed from waste management facilities which were supposed to aid in waste disposal. To address the issue plaguing the community, residents have gathered together to battle against the injustice brought upon the area. Although the battle for injustice within the garbage war is still taking place, the residents continue to seek environmental justice in Chicago to address the lack of maintenance placed upon the waste facilities.

In addition to the failed maintenance of waste facilities and the injustice which occurred in Little Village, environmental “injustice” is shown to persist within the health of the Chicago residents through the emission of air pollutants from power plants, located in minority communities. Throughout the twentieth century, Chicago has played a major role in the transportation and material processing, causing the city to rank among the worst cities in the U.S. for air pollution (Katherine King pg. 5). National and city-level case studies have documented environmental injustice occurring in minority populations, leading to increased exposure of residents to these harmful air pollutants (King Katherine pg. 5). Exposure to these transported pollutants is lower in neighborhoods with low minority rates, however pollution risk tends to increase in neighborhoods with a high minority rating than other areas in Chicago (King Katherine 6). An example of these pollutants can be viewed through the emissions occurring from Waukegan’s coal-fired power plant, which is one of the nation’s oldest coal plants (LVEJO ushrnetwork).

The Waukegan plant was built in 1923 and currently used boilers over half a century, which caused the outdated operations used to burn coal to pollute the surrounding communities of Lake County in Illinois, Chicago (LVEJO ushrnetwork). Although the coal plant had a few controls to help reduce the high levels of toxic nitrogen oxide and mercury emissions, the plant still served as the largest source of sulfur dioxide being polluted in Lake County, contributing to the high levels of particulate matter. The current air quality of the County does not meet the national standard for permissible levels of fine particulate matter that is deemed “safe.” The pollution being emitted from the coal power plant has shown significant impacts on human health from its dangerous toxins such as carbon dioxide, nitrogen dioxide, sulfur dioxide, and traces of mercury (LVEJO ushrnetwork). These emitted toxins pollute the County’s water resources causing residents to consume these contaminated resources leading to respiratory infections if not worse. As the pollutants, especially mercury which the Waukegan power plant emits roughly 100 lbs. of a year, fall into waterways, and accumulates in plants and organisms, they continue to make their way up the food chain.

As the toxins continue ascending up the food chain, the resulting neurotoxins stemming from these pollutants can lead to damage of the nervous system and organs in adults (LVEJO ushrnetwork). It was in 2012 that the NAACP released a report finding that low-income and minority communities have been affected by health issues emanating from the coal plant (LVEJO ushrnetwork). The analysis of the issue found the coal plant in violation of environmental justice, due to the failed maintenance of the plant, resulting in residents being subjected to inhaling and consuming toxic substances. The neglect for environmental justice in the area of Waukegan due to failed maintenance of the plant provides evidence of the health concerns which are plaguing communities in Chicago. These health concerns are not only limited to Waukegan but include areas such as Pilsen and South Chicago which are suffering from similar air pollution, leading to health concerns in the community. These health concerns stem from a lack of response to power plants not being properly regulated in their emissions, along with the location of these plants being mainly in areas of low-income housing or high minority areas. As seen in Waukegan environmental justice is still being sought after in these areas with the help of the community along with additional aid from the LVEJO and environmental organizations.

Causes and Consequences of Environmental Injustice. (2021, Oct 31). Retrieved from http://envrexperts.com/free-essays/essay-about-causes-and-consequences-environmental-injustice 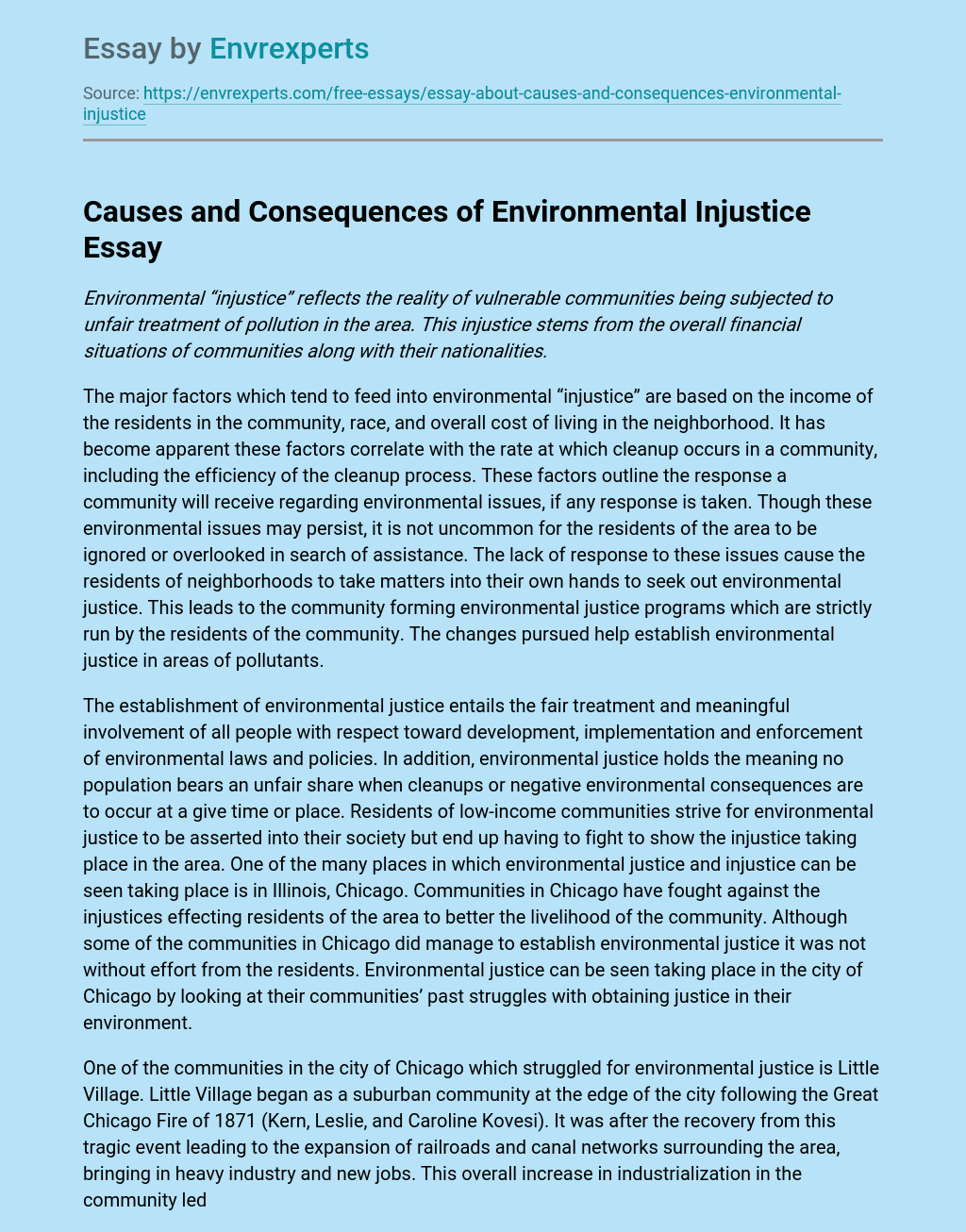