Causes, Effects and Ways to Prevent Water Pollution in India

Don’t waste time
Get a verified writer to help you with Causes, Effects and Ways to Prevent Water Pollution in India
Hire writer
$35.80 for a 2-page paper

Water pollution happens because of irresponsible citizens of India who does not value the importance of water. This research is about the causes, effects and ways to prevent water pollution in India.

First and foremost, one of the causes for water pollution in India is sewage. Sewage means waste water. Waste water also contains human waste, oils, soaps and chemicals (Denchak, M., 2018). In houses this includes water from sinks, showers, bathtubs and toilets. The harmful chemicals in waste water are the one which make the water poisonous.

Apart from that, another cause of water pollution is dumping. In India, the people dump the litters and solid waste into the rivers. The numbers of people dumping the wastes into the rivers are increased because people in India are avoiding of paying the fees for disposal.

Moving from that, there is also another cause of water pollution in India that is oil spills. Sea water gets polluted because of the oil spilled from tankers and ships. Oil spill from a tanker is a serious problem because there is s big quantity of oil spilt into the water in one place. Oil cannot liquefy in water and shapes a thick sludge in the water. Oil pollution is the main that causes water pollution because it forms a think sludge in the water (Denchak, M., 2018).

Besides, another cause of water pollution in India is eutrophication. Environment becomes enriched with nutrients is called as eutrophication (Chislock,M. F., Doster, E., Zitomer,R. A., & Wilson, A. E., 2013).In India most of the people work as a farmer and they use fertilisers for farming. The nutrients level will be increased when the fertilisers run-off into the nearby rivers or streams. This can cause of alga blooming in the water when the level of nutrients increased. The water will be polluted after the alga blooms in the river.

The rising number of polluted rivers and lakes in India is affecting flora and fauna as well as humans too. One of the effects of water pollution in India is impact on flora and fauna. The chemicals and sewage that thrown into the rivers can cause the species of aquatic such as, fishes, crabs, turtle, Egeria densa, parrot’s feather and other animals and plants to go extinct or to move to a safer place. Not only that, the plants in the water also will die. The number of aquatic species in India will be decreased because of water pollution.

Moreover, the effect of water pollution is loss of livelihood (Shah,N., 2018). Nowadays, fishermen in India find it difficult to catch fish because there is no sufficient place. The aquatic animals moved away from the polluted waters and some animals may face extinction. Fisherman finds that fish that caught from polluted water is high in mercury which humans cannot consume it. The fish is contaminated by the human faeces. This is not only effect the aquatic species but humans also lose their job as a fisherman.

Sewage is the best example of how pollution can affect the people in India. Sewage disposed into the sea waters can wash up on beaches and can cause sickness to people. People who surf, bath or playing in the polluted water will make them to fall ill. Sewage has also made another harmful effect on shellfish (Rajshree, 2011). Sewage is the thing which poisons the shellfish by cockles and mussels that grow near the shore. People who eat the shellfish can be suffered from sickness that called as paralytic shellfish poisoning. The number of people who are eating shellfish is decreased because of the poison which makes people to fall illness.

There are some better ways to solve the problems of water pollution. One of the best solutions to overcome water pollution in India is having septic tanks that treat sewage (Manickam.,V., & Muralikrishna, I.V., 2017). Using septic tanks to treat sewage is the right way because septic tanks are located at one static place. Septic tanks will always located at an individual building which is easy to treat sewage. The solid waste will turned into liquid when it flows into the septic tanks. Solid waste will separate depending on their weight. Heavier thing will be on the bottom of the tank and lighter things like soap, detergent will form a layer at the top of the septic tank. Degrade of solid things will happen using the method of biological process. The solid things will change to liquid and then will flow out from the septic tank into drainage system in land. The remaining solids of the things will filter out.

The next solution for water pollution is the Central Board begins a network which will monitor the aquatic resources all over the country (Singh & Gupta, 2017). The water quality of the rivers and seas will monitor at a state level in India. This is one of the better ways to avoid people to throw rubbishes inside the sea.

The solution to overcome from water pollution is to educate the people to value the beautiful environment around them (Woodford,C., 2019). The government of India should make the citizens of India aware of the water pollution problem. The government of India should urge the schools and universities to have campaign such as cleaning the polluted beaches by collecting rubbishes. The people of India should also educate their next generation by cleaning up the polluted rivers. The people should be a good example for the future generations by keeping the water clean from litters. People in India should not afraid to complain about the factories near rivers and lakes which pours chemicals into the water. The good act of an individual in India can create awareness among other people. 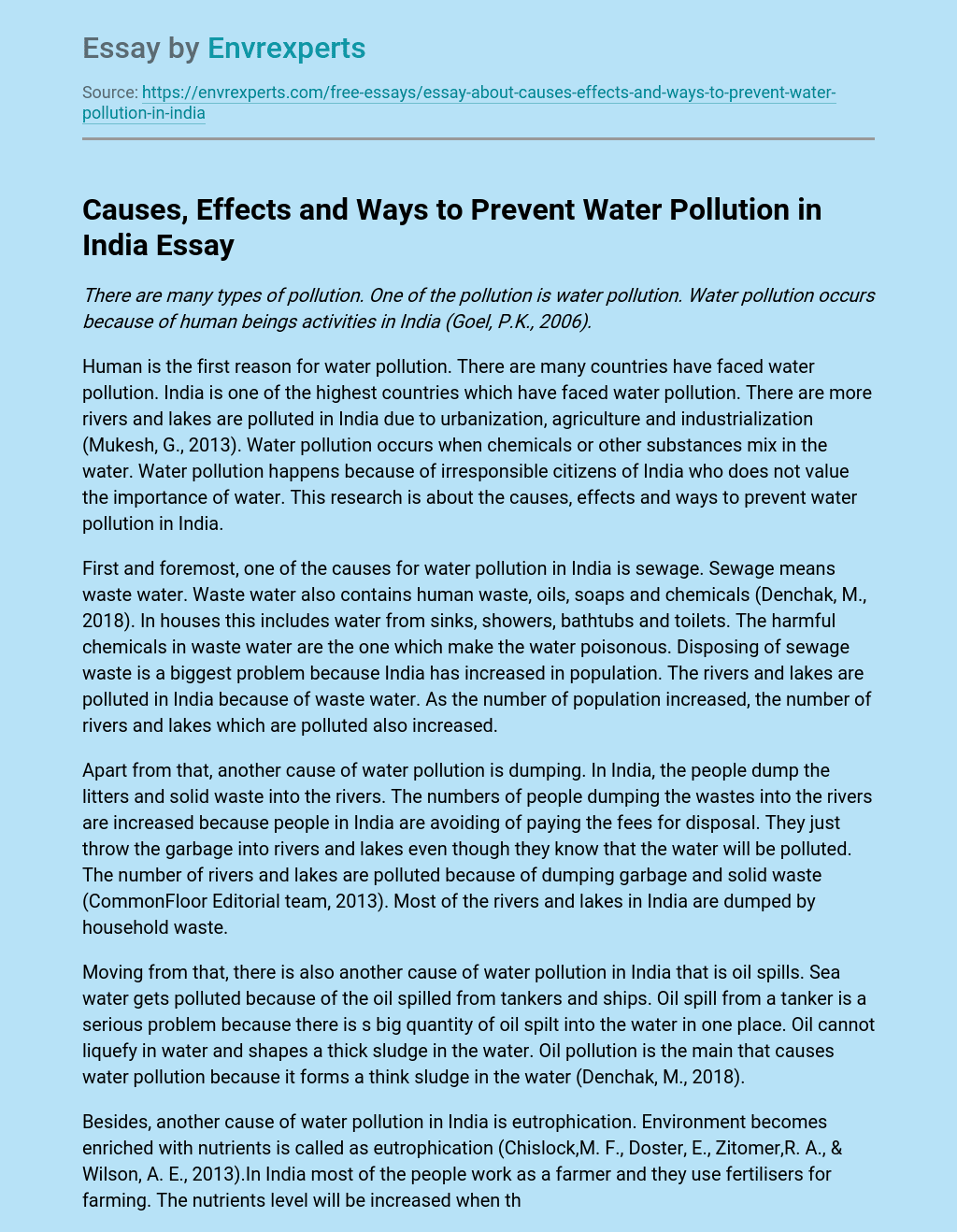