Soil erosion is a process that involves wearing away if topsoil. The process involves loosening of the soil particles, blowing or washing away of the soil particles and ends up in the valley and faraway lands or washed away oceans by rivers and streams. Soil erosion is a natural process which has increasingly has been exacerbated by human activities such as agriculture and deforestation. Erosion, it is whether by water, wind or tillage involves three distinct action soil detachment, movement and deposition.

Don’t waste time
Get a verified writer to help you with Causes, Impact and Solution of Soil Erosion
Hire writer
$35.80 for a 2-page paper

Topsoil which is high in organic matter, fertility and soil life is relocated elsewhere on site where it builds up over time or is carried off side where it fills in drainage channels. ( Frank, 1997)

Soil erosion can be caused by many activities such as deforestation which is the major factor responsible for soil erosion. It is the removal of forest cover which function as a binder of the top layer of the soil which increasingly land demand have resulted in enhancing extent of soil erosion.

High winds can contribute to soil erosion particularly in dry weather periods. The wind picks up the loose soil particles with its natural force and carries them away to far lands and leaving the soil sculptured. Overgrazing and overstocking has led to reduced ground cover and breakdown of soil particles, giving room for erosion and accelerating the erosive effects by wind and rain. This reduces soil quality and agricultural productivity. (Strahler, 2013) River and streams when they are full of soil deposits due to sedimentation and the valley level up with the surface, the water begins to wash away the soil at the banks.

This erosive activity is evident in most rivers of streams especially during heavy rainfall and a rapid river channel movement. Crops and grasses support the structure of soils, thereby decreasing the amount of soil erosion. Areas with less naturally occurring flora are more susceptible to soil erosion. The physical features of the land also contribute to soil erosion. Land with a high slope will facilitate the process of the rainwater flow rate or runoff saturation in the area, particularly due to the faster movement of the water downhill.(Frank, 1997)

Soil erosion removes valuable topsoil which is the most productive part of the soil profile for agricultural purposes. The loss of this top soil results in lower yields and higher production costs. The impacts of soil erosion on cropping lands include reduced ability of the soil to store water and nutrients. Higher rates of runoff, shedding water and nutrients otherwise used for crop growth. Loss of newly planted crops. Deposits of silt in low lying areas. Soil erosion increases water run off and run off often carries pollutants with which it negatively impact the surrounding land. Soil erosion results in increased flooding, increased increased sedimentation in rivers and streams, loss of soil nutrients and soil degradation and in extreme cases, desertification.(Turback, 1993) 2 There are measures which we can use or apply in order to control soil erosion such as planting grass and shrubs, these are effective at stopping soil erosion. This is primarily because plant root tend to hold soil together making it harder to erode. The leaves of the plants also help to reduce the velocity of the raindrop filling on the ground, making it harder for them to dislodge the soil and erode it.Ornamental grass and low, spreading shrubs work best as they leave no areas of bare soil exposed to the elements. The use of conversation tillage which produces a smooth surface that leaves soil vulnerable to erosion. Conversation tillage such as non-till planting, strip rotary tillage and disking leave more of the field surface covered with crop reside that protects the soil from eroding forces. (Frank, 1997)

Strip farming in areas where a slope is particularly steep or there is no alternative method of preventing erosion, planting fields in long strips alternated in a crop rotation system has proven effective. Contour farming planting in rows pattern that run level around hill instead of up and down the slope has been shown to reduce runoff and decrease the risk of water erosion. There are many varieties of fiber, biodegradable, and compost blankets/mats on the market today, and they have all been designed with one aim; to minimize the effects of water erosion on slopes and embankments. Rolled mats are usually made from mulch that is held together by a fiber mesh. They degrade slowly, allowing vegetation that may have been grown in the area to grow and take over the job of protecting the soil from erosion when the mats have finally degraded completely.

Compost erosion control blankets act similarly to mulch products but provide organic nutrients that promote vegetation growth, even in areas where germination, moisture management and irrigation could be challenging.(Turback, 1993) \nIf you are planning on trying to control the erosion on very steep slopes or embankments, sometimes planting vegetation may just not cut it as the slope may be too steep to support anything other than the hardiest grass due to the rapid rate of erosion. If this is the case, you should consider building terraces to help slow down erosion as the vegetation takes hold. The beds that are created by the terraces can then be used to plant vegetation such as ornamental plants or grass. Depending on the incline of the slope or embankment, one of the most effective ways to help prevent erosion is to create diversions which will channel excess water down the slope along a predetermined path. One of the simplest ways to do this is to create open ditches or drains by simply digging along the slope at regular intervals. Use of pipes and gutters is also very effective, and work just as well as natural drains when designed and installed properly.(Frank, 1997)

Tshakhuma is located Limpopo Province , it is found between Thohoyandou and Makhado Louis Trichardt. It falls under Makhado Municipality and the main road R524 is through it on 23°3’0’’S and 30°18’0’’E

Soil erosion is the major environmental threat to the productive capacity of agriculture and economy of the country. It mostly affect those subsistence farmers who rely on agriculture to feed their farmilies. Soil erosion lead to food insecurity in Tshakhuma. Most of commercial farmers lose their job due to loss of crops which lead to low profit the employee cannot have enough money to pay them. Both commercial and subsistence farmers are advised to practice erosion control in order for them not to lose their crops easily. Subsistence farmers since they indicated that they don’t have enough money to install things such as windbreaks they are advised to practise contour farming in which it is done when the ground has significant slope. It involves plowing and planting in a row across the slope of the land. Each row act as a small dam to help to hold topsoil and to slow down water runoff.

Soil erosion and the effects of the soil erosion on crop productivity have become emotional issues and have attracted attention of agriculturists, constructors and the public in general. In spite of heavy investments in research and development, the global rates of accelerated erosion are now presumably higher than ever before. However the data from available method obtained by diverse methods are uncomparable, unreliable, confusing and often vary by several orders of magnitude. Reports of erosion erosion caused alterations in crop productivity and soil properties are also contradictory and subjective. In addition to the lack of standardized methodology in evaluating soil erosion and its effect on crops, controversial interpretations are attributed to differences in soil profile characteristics, nutrient status, crops grown and prevailing climatic conditions.

Construction activities left the sites with ungraded soil by erosion and begin to adversely affect the surrounding environment. The of soil quality management on construction sites is to revegetate for protection against offsite damage and increase soil organic matter levels to remedy the onsite damage caused by site preparation. The constructors were advised to practise construction erosion control by diving the project into smaller phases clearing areas of vegetation. They have to schedule their excavation during low rainfall period when possible. They have to install windbreaks where wind is concern. Water should be diverted in areas. Any structural control measures should be inspected and maintained. Soil compaction should be avoided by restricting the use of trucks and heavy equipment to limited areas. Steepness of slopes should be minimized.

The most significant consideration with regard to the land use in Tshakhuma is slope. The sandy and silty texture in Tshakhuma are extremely susceptile to wind and water erosion when the stabilizing protection of vegetation cover is removed. This is especially true in steeply sloping portion of the study area. Soils on upland and adjacent steeply sloping portions of the study area already exhibit characteristics that are the direct results of soil erosion. They are thin and sandy. Much of the rich, fertile loess derived parent material has been removed from this least part, being stored lower on the landscape. In atleast one case, redeposition of silty and sandy material eroded from upslope was rapid enough to bury a pre existing soil. I recommend that future land use of the Tshakhuma area mitigate for soil erosion. Soils in Tshakhuma though already affected by soil erosion, remain moderately fertile and suitable for cultivation. Though thin, they can support some construction and can be used for a variety of earthen fill.

However, great care during any land use activity that removes or inhibits the establishment of vegetation should be taken . Soil erosion control practices such as zero tillages and contour plowing shouldbe implemented if cultivation is to continue. Silt fences and soil berms should be used as a building site. Soils at the site are best suited to low impact activities such as pasture or recreation areas. Even if used for these purposes, are must be taken to control foot, animal and vehicle traffic especially on the steeper portions of the study area. Any such activity that removes stabilizing vegetation will result in soil erosion. Both soil erosion by wind and soil erosion by water is to be expected if the protection of stabilizing vegetation is removed and these soils are exposed. 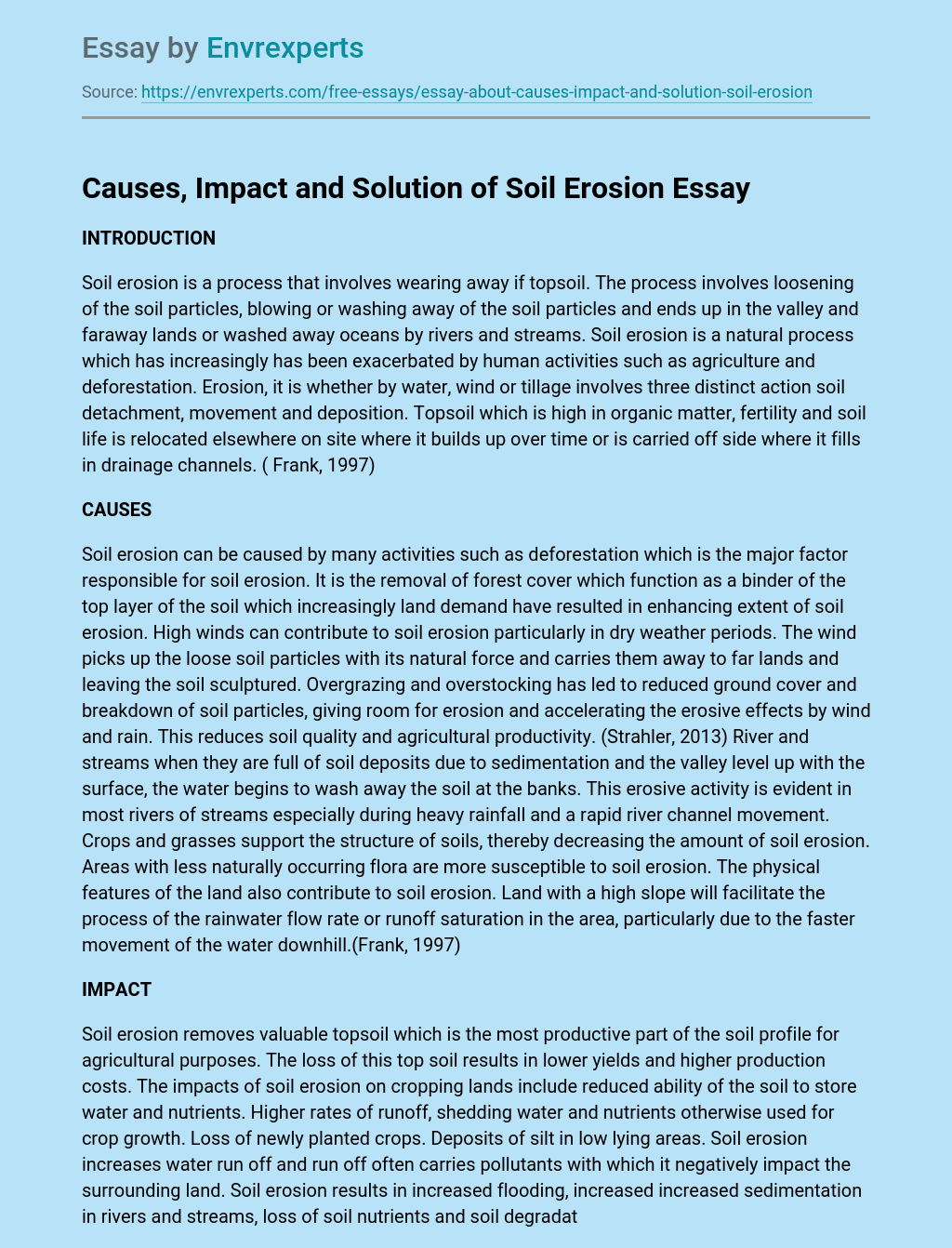