Cephalopods and Its Role in Climate Change

Cephalopods play crucial ecological roles in the ocean, are opportunistic predators feeding on numerous species like fishes and crustaceans, and are important prey of fishes, marine mammals and seabirds (Piatkowski et al. 2001). Nowadays, the abundance of traditionally targeted fish species among higher trophic levels is in continual decline due to global climate change and overfishing, which inadvertently benefits the prevalence of cephalopods (Rosa et al., 2019). Cephalopods have great phenotypic plasticity and a wide ranging of diet that can help them rapidly adapt to changing environments, leading to their abundance rising when their predators and competitors become overfished (Pierce et al.

Don’t waste time
Get a verified writer to help you with Cephalopods and Its Role in Climate Change
Hire writer
$35.80 for a 2-page paper

Catches of traditionally sought fish have decreased dramatically worldwide in the past few decades whilst catches of cephalopods increased substantially because of their rapid growth, short lifespan, high turnover rate and strong phenotypic plasticity.

(Pang et al., 2018). There is increasing evidence that spatial distribution patterns of marine species are as important as long-term fluctuations in their abundance (Ciannelli et al. 2013), which has significant implications for marine ecology and fisheries management (Puerta et al., 2014). Moreover, understanding the complexity of relationships between abiotic and biotic factors is vitally important for interpreting distributional changes in the abundance of fish stocks (such as Gadus morhua in Swain 1999). Previous studies have shown that 13 or 14 cephalopod species belonging to 6 families inhabit the Yellow Sea (YS) (Wu et al.

They have different spatial distributions according to their diverse habitat preferences and environmental requirements. The oceanic squid (T. pacificus) spends its entire life in the pelagic environment, whereas neritic squid such as Loliolus spp prefer benthic environments throughout most of their lifespan. The octopuses O. ocellatus and O. variabilis have a planktonic larval stage and descend to the seabed post-settlement to complete their juvenile stage (Villanueva et al., 2016). Bobtail squid (S. birostrata and Euprymna spp) usually live in coastal bottom habitats following a planktonic larvae stage (Jereb and Roper, 2006). These species live exclusively in shallow coastal waters with the exception of T. pacificus which typically lives in oceanic waters at higher depths. Thus, neritic and bobtail squid have a narrow distributional range in the northwestern Pacific Ocean, predominantly in East Asia, whereas T. pacificus is more widely distributed in the northern Pacific Ocean, but nevertheless mainly inhabits its northwestern region. All these species have life spans less than one year with totally different migration patterns. Todarodes pacificus has three intra-annual cohorts during summer, autumn and winter. The main branches go to the Japan Sea and Pacific side near Japan for feeding, and smaller numbers mostly belonging to the winter cohort head to the YS which forms the YS branch. The YS branch migrates northward from the East China Sea (ECS) in May and June, and arrives at the feeding ground in the YS in August and remains there until October, after which it then goes back to ECS for spawning during winter (Jin et al., 2005). Loliolus spp including L. japonicus and L. beka inhabit the Yellow Sea Large Marine Ecosystem (YSLME, including the YS and Bohai Sea (BS)). Loliolus japonica is mainly dominant in the YS while L. beka is dominated cephalopods in the BS (Jin et al., 2005) but there is substantial overlapping of these species in the YSLME. Their morphological similarity makes them difficult to distinguish from each other without using a microscope (Jereb and Roper, 2010; Dong, 1988).

Therefore, it is infeasible to separate two species one by one with a microscope in the field especially when encountering a large catch, with the practical solution being to group them together during surveys and fisheries assessments. Loliolus spp remain within the central YS for overwintering from December to March, and then migrate to the coast of the YS and BS for feeding and spawning during late spring and summer, before migrating back to the overwintering ground during late autumn and winter (Jin et al., 2005). Other species exhibit relatively short movements during their spawning season which usually occurs during spring (Dong, 1988). Although the proportion of cephalopods in catches has been increasing over several decades, it has only accounted for about 5% of the total coastal marine catch during the last decade (Pang et al., 2018). Moreover, catch data are unavailable for each species, which makes fishery-independent survey data more valuable for scientific assessments. In the YS, T. pacificus is the most abundant and important among cephalopod fisheries, followed by Loliolus spp and O. ocellatus. The T. pacificus fishery in the YS, which is based on gillnet and trawl net, commenced during the 1960s, and the most recent reported catch was about 56,000 tons back in the early 2000s. Fishing for T. pacificus mainly occurs from September to December, and commences earlier in the northern than the southern YS (Jin et al., 2005). The Loliolus spp fishery in the YS, which is caught as bycatch in set and trawl nets, is mainly conducted during spring to target the spawning cohort and in winter to catch the overwintering cohort. For O. ocellatus, caught mainly by traps, and as bycatch in set and trawl nets, the fishing activity mostly takes place in the early spring when this species commences to spawn (Dong, 1988).

Since all these species have planktonic larvae stages and T. pacificus spend its whole life in the pelagic environment, sea surface temperature (SST) can largely influence the early stages of these species and the entire life history of T. pacificus. Cephalopods’ spatial distribution is also influenced by the distribution of their prey which is related to chlorophyll-a concentration (CHLA) in the water column. The neritic and bobtail squids are small sized cephalopods, which means that sea surface height (SSH) may influence their distribution during their diel vertical migration (Dong, 1988; Jin et al., 2005; Jereb and Roper, 2006, 2010). Habitat suitability index (HSI) modelling has become a broadly used and powerful tool to provide habitat preference information, which usually combines abundance index (AI) and oceanographic variables (such as temperature, salinity, chlorophyll, oxygen concentration, etc.) using a variety of different methods (Chen et al., 2009; Tian et al., 2009; Chang et al., 2013;Tanaka and Chen, 2015; Yu et al., 2016a; Yu et al., 2016b; Yu et al., 2019; Xue et al., 2017). The spatial distribution of cephalopods in the YS and the relationship between their AI and oceanographic variables, especially for non-target species, are rarely known. The objective of the present study was to 1) explore the relationship between AI and oceanographic variables; 2) develop and compare different HSI models for each species; and to 3) find out if the HSI based on the last two decades still matches with the survey data of 2018.

Cephalopods and Its Role in Climate Change. (2021, Oct 31). Retrieved from http://envrexperts.com/free-essays/essay-about-cephalopods-and-its-role-climate-change 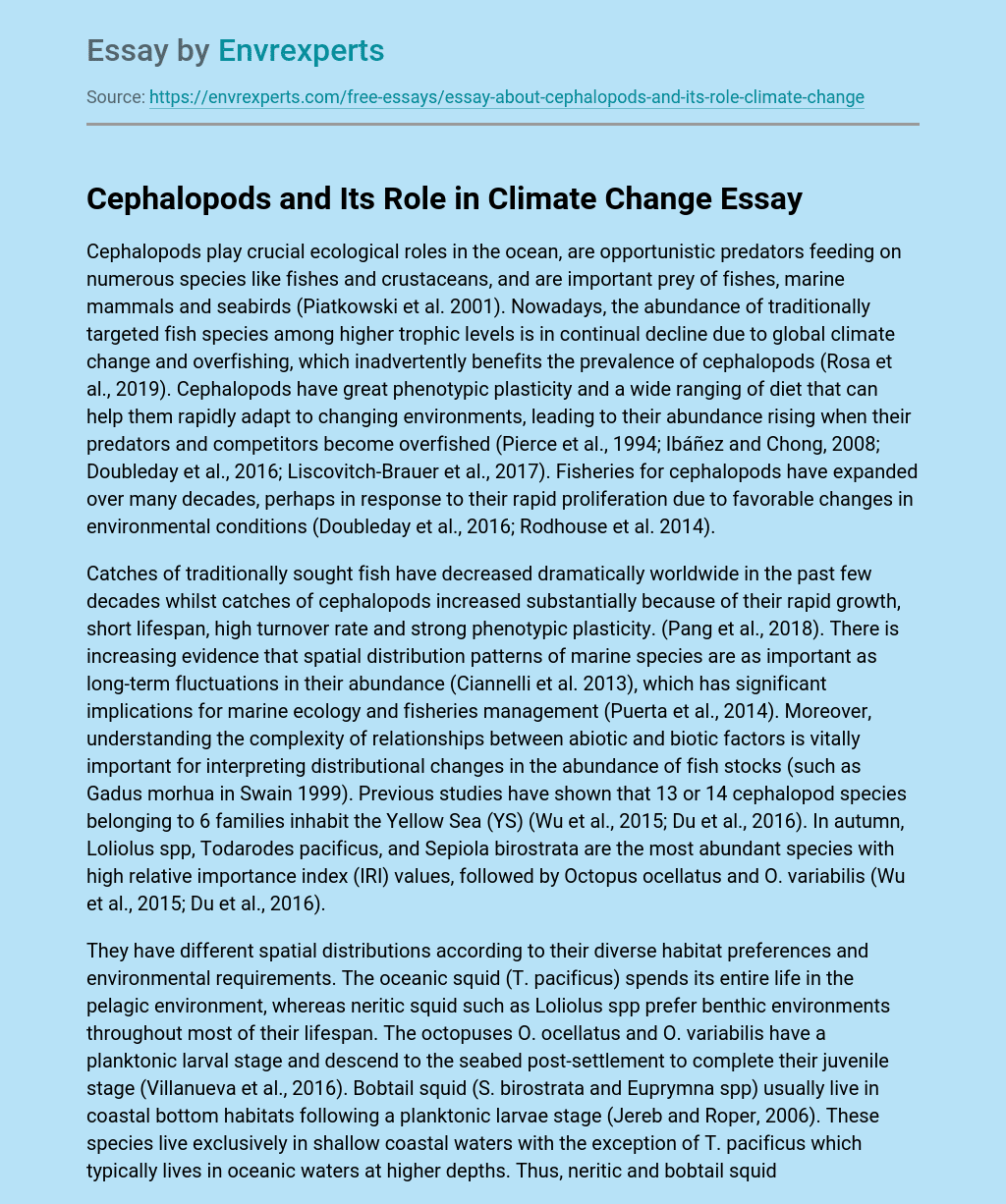