Characteristics and Prevention of Air Pollution by Automobiles

The waste products from automobiles, and the environmental pollution that they cause have been a topic of heated debate for some time now. As far back as the 1960s a handful people have fervently voiced their opinions on the harmful toxins that are thrust into our precious natural resources from automobiles. Today, in the 21st century, that handful of concerned people has ballooned into a global concern.

Although the automotive boom began in the late 1940s, it wasnt until the 1970s that people began to realize that automobiles in the ways that they burned fuel then and now are killing Mother earth and the people that live there.

Don’t waste time
Get a verified writer to help you with Characteristics and Prevention of Air Pollution by Automobiles
Hire writer
$35.80 for a 2-page paper

When cars and trucks burn gasoline, air toxins come out of the tailpipes. These air toxins are combustion products–chemicals that are produced when a substance is burned (Clean Air.)

A medley of gases that spew from automobiles pollute our atmosphere, and are fast making the environment a place unfit for living.

A combination of unburned Hydrocarbons, Carbon Monoxide, Oxides of Nitrogen combine to spread an obnoxious mixture. When in excess quantity, these tend to cause automobile pollution. Within a certain range they are acceptable, but when the engine is not tuned properly, a vehicle uses obsolete technology, or the quality of fuel is not good, there is a result of a higher level of emission of all the gases. Pollution has cast its ominous shadow across the world.

Two of the pollutants that are emitted by automobiles are hydrocarbons (unburned fuel) and nitric oxide.

When these pollutants build up to sufficiently high levels, a chain reaction occurs from their interaction with sunlight in which the NO is converted to nitrogen dioxide (NO2). NO2 is a brown gas and at sufficiently high levels can contribute to urban haze, hence the smog that laypeople in big cities complain about. However, a more serious problem is that NO2 can absorb sunlight and break apart to produce oxygen atoms that combine with the O2 in the air to produce ozone (03). Ozone is a powerful oxidizing agent, and a toxic gas. In North America elevated levels of tropospheric ozone cause several billion dollars per year damage to crops (45 million/per year in Ontario), structures, forests, and human health. It is believed that the natural level of ozone in the clean troposphere is 10 to 15 parts-per-billion. Due to the increasing concentrations of hydrocarbons and NO!

in the atmosphere, scientists have found that ozone levels in "clean air" are now approximately 30 parts-per-billion (Atmospheric Chemistry).
Even if the sky above you seems to be clear and blue, smog everywhere. It is a choking sensation every time one ventures out into the streets (Smog). What we typically call smog is primarily made up of ground-level ozone. Ozone can be good or bad depending on where it is located. Ozone in the stratosphere high above the Earth protects human health and the environment, but ground-level ozone is the main harmful ingredient in smog. Ground-level ozone is produced by the combination of pollutants from many sources, including smokestacks, cars, paints, and solvents. For example, when a car burns gasoline, releasing exhaust fumes smog-forming pollutants rise into the sky.

When fossil fuels (e.g., gasoline) are burned, a variety of pollutants are emitted into the earth's troposphere, or the region of the atmosphere in which we live. Weather and geography determine where smog goes and how bad it is. When temperature inversions occur, warm air stays near the ground instead of rising. If winds are calm, smog may stay in place for days at a time. As traffic and other sources add more pollutants to the air, the smog gets worse.

Often, wind blows smog-forming pollutants away from their sources. The smog-forming reactions take place while the pollutants are being blown through the air by the wind. This explains why smog is often more severe miles away from the source of the smog-forming pollutants than it is at the source. The smog-forming pollutants literally cook in the sky, and if it's hot and sunny, smog forms more easily. Just as it takes time to bake a cake, it takes time to cook up smog. It takes several hours from the time the pollutants enter into the air until the smog becomes harmful. Since smog is blind, nothing stops smog and air pollutants from crossing county and state lines. When a metropolitan area covers more than one state (for instance, the New York metropolitan area includes parts of New Jersey and Connecticut), their governments and air pollution control agencies must cooperate to solve their problem. Governments on the East Coast from Maine to Washington, D.C. are working together in a multistate effort to reduce the area's smog problem.

The Clean Air Act uses this new classification system to tailor clean-up requirements to the severity of the pollution and set realistic deadlines for reaching clean-up goals. If deadlines are missed, the law allows more time to clean up, but usually a nonattainment area that has missed a clean-up deadline will have to meet the stricter clean-up requirements set for more polluted areas. Not only must nonattainment areas meet deadlines, states with nonattainment areas must show the EPA that they are making moves to clean up the air before the deadline, making reasonable further progress. States will usually do most of the planning for cleaning up criteria air pollutants, using the permit system to make sure power plants, factories and other pollution sources meet their clean-up goals.

The comprehensive approach to reducing criteria air pollutants taken by the 1990 Act covers many different sources and a variety of clean-up methods. Many of the smog clean-up requirements involve motor vehicles (cars, trucks, buses). Also, as the pollution gets worse, pollution controls are required for smaller sources. However the EPA recently reviewed the current air quality standards for groundlevel ozone, or smog, and particulate matter (or PM). Based on new scientific evidence, revisions have been made to both standards. At the same time, EPA is developing a new program to control regional haze, which is largely caused by particulate matter. Under the Clean Air Act, the EPA is required to study whether and how to reduce hazardous air pollutants from small neighborhood polluters such as auto paint shops, print shops, etc. The agency will also have to look at air pollution after the first round of regulations to see whether the remaining health hazards require further regulatory action.

Cars, trucks, buses and other mobile sources release large amounts of hazardous air pollutants like formaldehyde and benzene. Cleaner fuels and engines and making sure that pollution control devices work should reduce hazardous air pollutants from mobile sources.
Many provisions and changes have been added to the Clean Air Act. For instance, the Bhopal tragedy inspired the 1990 Clean Air Act requirement that factories and other businesses develop plans to prevent accidental releases of highly toxic chemicals. The Act establishes the Chemical Safety Board to investigate and report on accidental releases of hazardous air pollutants from industrial plants. The Chemical Safety Board will operate like the National Transportation Safety Board (NTSB), which investigates plane and train crashes (Clean Air Act).

The first benefit of using electric fuel is that you are not polluting the environment. Although, some people argue that there are some emissions that can be attributed to Evs, or the emissions that are generated in the electricity production process at the power (Electric Fuel).

Another way alternative forms of energy are being used is in the use of a biodiesel fuel. Biodiesel (mono alkyl esters) is a cleaner-burning diesel fuel made from natural, renewable sources such as vegetable oils. Just like petroleum diesel, biodiesel operates in combustion-ignition engines. The use of biodiesel in a conventional diesel engine results in substantial reduction of unburned hydrocarbons, carbon monoxide, and particulate matter. It also decreases the solid carbon fraction of particulate matter (since the oxygen in biodiesel enables more complete combustion to CO2), eliminates the sulfate fraction, as there is no sulfur in the fuel, while the soluble, or hydrocarbon, fraction stays the same or is increased. Therefore, biodiesel works well with new technologies such as catalysts, which reduce the soluble fraction of diesel particulate but not the solid carbon fraction, particulate traps, and exhaust gas recirculation, or a potentially longer engine life due to less carbon (Biodiesel Fuel).

Another alternate fuel is petroleum, but there is a growing concern that there is too limited a supply to serve as a cure to the worlds problems. However, liquefied petroleum gas (LPG) consists mainly of propane, propylene, butane, and butylene in various mixtures. It is produced as a by-product of natural gas processing and petroleum refining (Alternative Fuels).

Ethanol has also been explored as a cleaner form of fuel. Ethanol (ethyl alcohol, grain alcohol, ETOH) is a clear, colorless liquid with a characteristic, agreeable odor. Two higher blends of ethanol, E-85 and E-95 are being explored as alternative fuels in demonstration programs. Ethanol is also made into ether, ethyltertiary-butyl ether (ETBE), that has properties of interest for oxygenated gasoline and reformulated fuels. The environmental benefits of ethanol include:

Also, Methanol is widely used as a cleaner fuel source. Methanol (CH3OH) is an alcohol fuel. As engine fuels, ethanol and methanol have similar chemical and physical characteristics. Methanol is methane with one hydrogen molecule replaced by a hydroxyl radical. It is produced from natural gas in production plants with 60% total energy efficiency. Methanol can be made with any renewable resource containing carbon such as seaweed, waste wood and garbage. This is a promising alternative, with a diversity of fuel applications with proven environmental, economic and consumer benefits. It is widely used today to produce the oxygenate MTBE added to cleaner burning gasoline. Cars, trucks and buses running millions of miles on methanol have proven its use as a total replacement for gasoline and diesel fuels in conventional engines. Methanol offers the greatest hope for early and broad introduction of fuel cells that will make the widespread use of electric vehicles practical within the next few years. Whether reformed to provide hydrogen for conventional fuel cells or used directly in the latest liquid fed cells, methanol will overcome the greatest remaining obstacle to commercialization, by offering the only economical way to transport and store the hydrogen needed for fuel cells. Methanol fuel cells will greatly reduce carbon dioxide emissions for vehicles and virtually eliminate smog and particulate pollution (Alternative Fuels).

The Quality of the air we breathe, unfortunately, now depends on the human populous. We know the problems that exist and how they are caused. Regulatory steps have been taken, however, it is believed that stronger measures must be taken with the ever-growing industry and mobilization (more automobiles) of the world. It is up to the people to take responsibility to keep the worlds air clean enough to breathe. Cleaner emissions, reduction of automobiles on the roads, and cleaner burning fuels are important factors that we the inhabitants of the world must strive for so that our Earth will be a livable place.

Characteristics and Prevention of Air Pollution by Automobiles. (2021, Oct 31). Retrieved from http://envrexperts.com/free-essays/essay-about-characteristics-and-prevention-air-pollution-automobiles 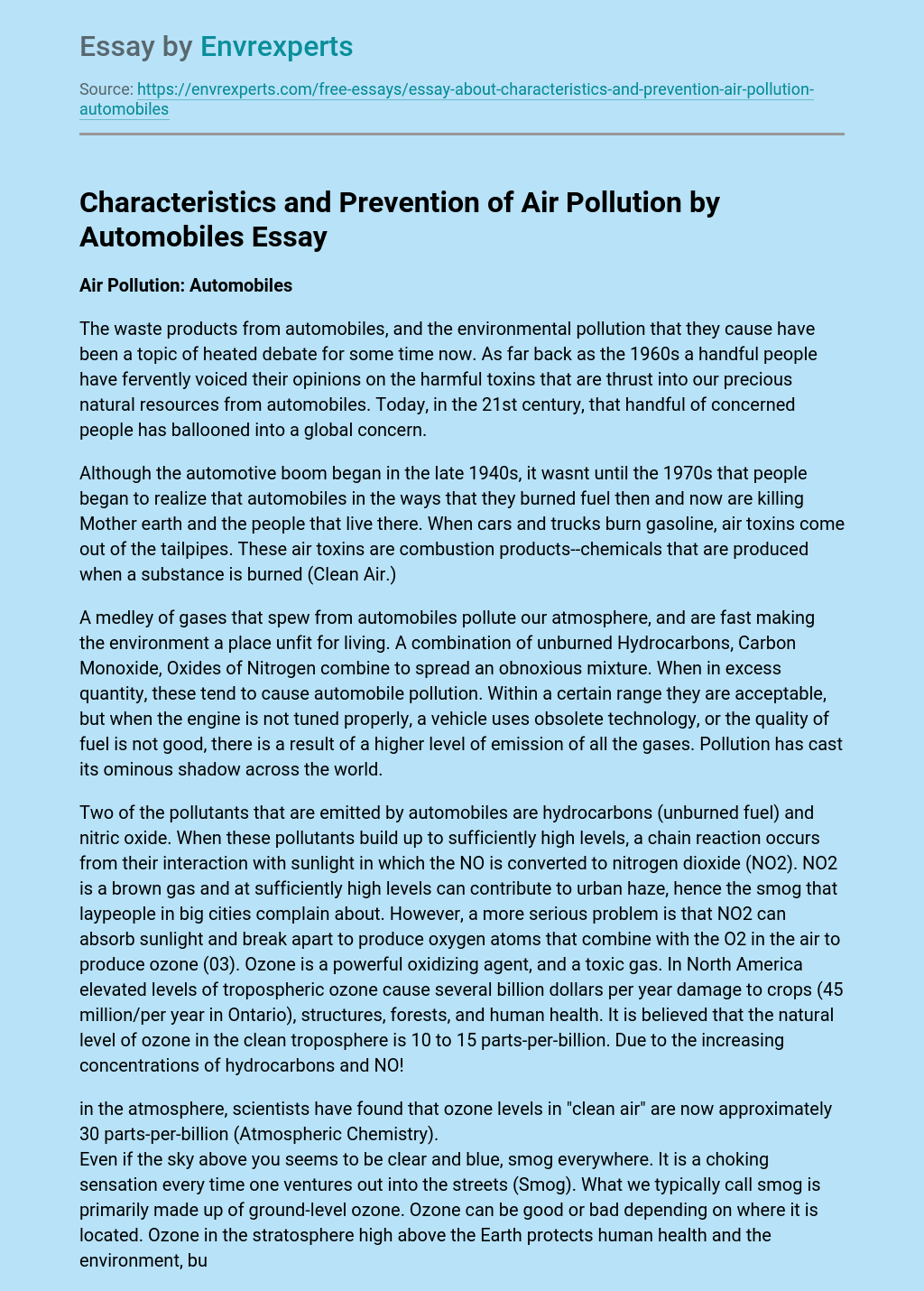