Chemical Weapon: Pesticides in The War

The author focuses on the heavy use of “pesticides” in the war in some of the fighting countries of the two world wars, a highly lethal chemical weapon. And he would like to emphasize that the use of these chemical weapons caused not only great harm to humanity but also killed many biological organisms and caused severe pollution and trauma to the natural environment. He mainly argues in the article during the World War, there were advertisements for pesticides from many commercial companies.

Don’t waste time
Get a verified writer to help you with Chemical Weapon: Pesticides in The War
Hire writer
$35.80 for a 2-page paper

But instead of praising the lethality of insecticide-killing potions, these ads promote the use of these chemical weapons on military purposes. The warring countries have described these insects as foreign enemies metaphorically and boasted that they should be treated as war, trying to destroy the enemy and protect their homeland. Constant advocacy that humanity is conducive to our development only if they eliminate these “external aggressors and create an external environment.” Humans do turn these pesticides into chemical weapons and put them into war, such as gas, to destroy the enemy on a massive scale like the elimination of insects.

Although many countries signed a ban on the use of these chemical weapons in war after the war, pesticides are still in use today. After the Second World War, whether it is the development of military weapons or civilian industries, they are not independent, but with nature has an undeniable connection. As for the original text, I can not entirely agree with the author’s statement, he said “The United States, on the other hand, did not use chemical weapons to kill human beings in World War II (except accidentally) and did not make genocide a national policy.

After the attack on Pearl Harbor, the United States dropped two atomic bombs on Hiroshima and Nagasaki in Japan. It killed a lot of people, but it also exposed a lot of people to radiation, and those people had genetic changes. Unlike conventional weapons such as bombs and bullets, which cause direct physical harm, it kills by destroying the body’s nerves and immune system, which can be very damaging to enemies who lack protective equipment and training. It is a “weapon of mass destruction”along with nuclear weapons. When the United States dropped the two atomic bombs, it acted as a deterrent to Japan, but the later harm to all humanity, this is the most inhuman, the cruelest assault weapons.

So chemical weapons can cause more and more lasting damage than conventional weapons. Not just pesticides are used in everyday life, but also offensive chemical weapons are a disaster for human beings. Although insecticides can eliminate pests and diseases of crops, in the long run, the accumulation of poisons has caused great harm to human health and the ecological environment. Even though many countries have started burning a lot of pesticides, they still produce a lot of toxic gases. The use of a single insecticide can do so much harm to the ecological environment, not to mention the cascade of damage caused by the explosion of chemical weapons. Hopefully, for the sake of the planet on which we live, humans will eventually consciously limit or ban the use of these chemicals.

Chemical Weapon: Pesticides in The War. (2021, Oct 31). Retrieved from http://envrexperts.com/free-essays/essay-about-chemical-weapon-pesticides-war 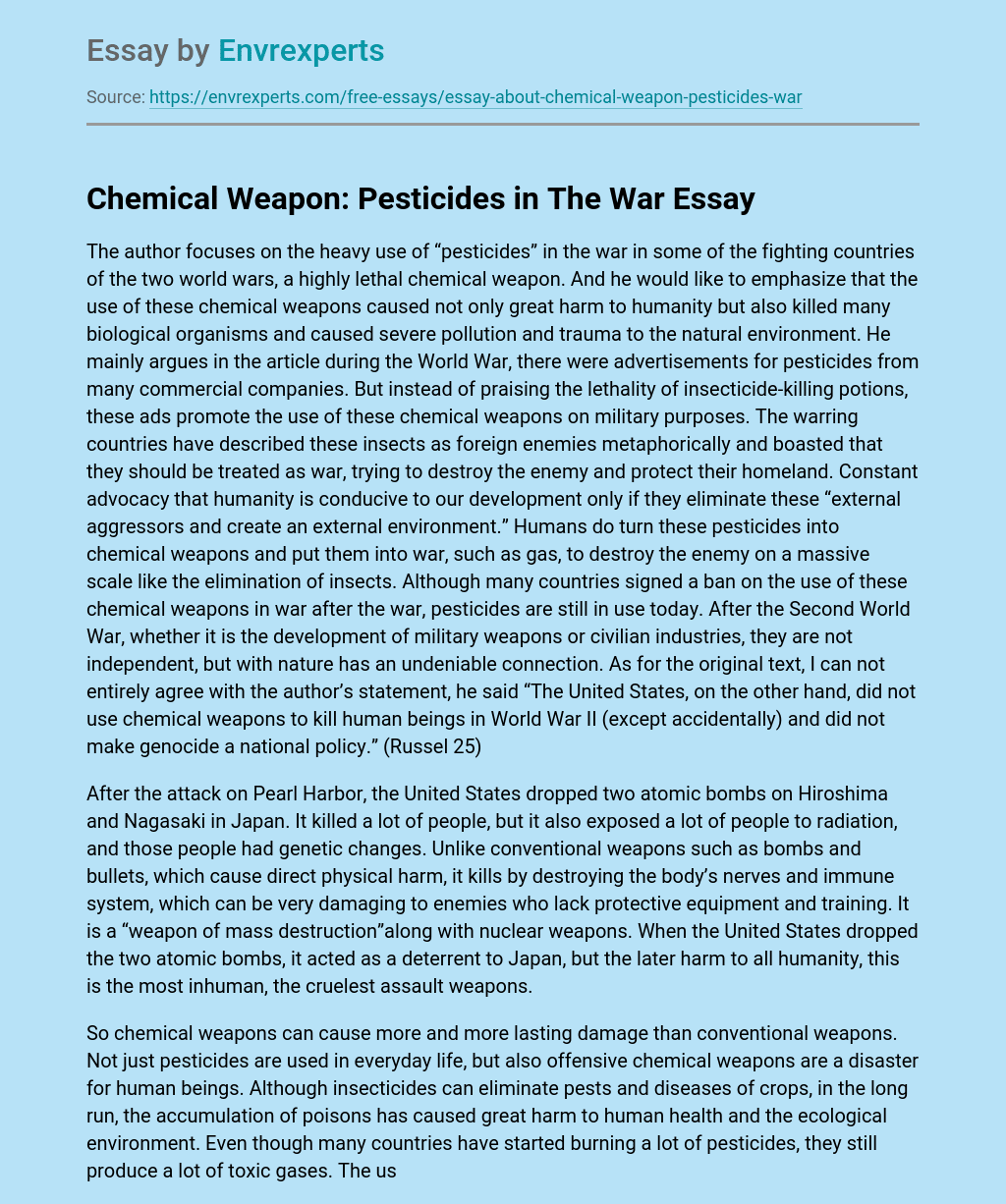