The increase in climate change-related weather events, and the rise in pollution across the globe requires the implementation of the most appropriate and sustainable practices. To this end, municipalities have established recycling policies to salvage marketable materials, eliminate the need for wasteful disposal mechanisms like landfilling and incinerating, provide a potential revenue stream, and foster environmental awareness in order to garner public support. Yet, the 34.3% national recycling rate is non-uniformly reported by cities, making it a challenge to reliably compare and assess city-by-city rates (EPA 2015), much less urban-to-rural rates.

Don’t waste time
Get a verified writer to help you with The Chicago Recycling Coalition
Hire writer
$35.80 for a 2-page paper

Indeed, elected officials “ both local and at higher levels of government “ are incentivized to greenwash the state of recycling in order to appear more environmentally conscious and economically savvy, and highlight their abilities to reduce air pollution and effect a lower unemployment rate.1 The reported data may thus present a less than accurate picture of the extentto which waste is recycled vis -vis the amount that is actually sold as repurposed commodities instead of simply being landfilled anyway.

This data collection and provision problem is especially prevalent in Chicago, where we observe a number of barriers to establishing an accurate recycling rate.

The goals of this paper are thus to assess and evaluate the existing recycling metrics for Chicago and other comparable municipalities, to describe the ways in which cities collect and present their recycling data, and, in light of successes elsewhere, to prescribe a number of educational initiatives to bolster recycling that draw upon improved access to and provision of data.

We show below that the system of Chicago`s recycling collection is the principal obstacle to establishing an accurate recycling rate for the city, and that this is a function of the city`s limited access to and provision of recycling data. Remarkably, the city does not systematically obtain information from its private haulers, nor does it appear that Chicago`s Department of Streets and Sanitation collects this information for the recycling it collects. This can be easily remedied by transitioning away from a recycling rate that is based on tonnages collected to a rate that is based on what is actually baled and sold. We also call for increased attention to recycling collection inefficiencies as well as increased accountability for the recycling practices of multiunit, commercial, and industrial properties. Find us on social media!

The Importance and Challenges of City-Based Comparisons

There is a lack of comparative analyses of recycling policies of major U.S. cities. Granted, making comparisons across municipalities often tends to result in a most-different comparative analysis given the county and state legislation within which each municipality`s policies exist. In other words, the comparative approach is only as valuable as the variance between/among cities can be controlled. Additionally, much of the existing literature on this topic is either in need of updating, having been published in the early to mid 1990s, or is focused especially on individualistic and psychological reasons to recycle rather than taking on the subject at a more macro-oriented, city-based scale (Oskamp 1995; Jenkins, Martinez, Palmer, and Podolski 2003; Folz 1991). Filling this gap in the literature, our comparison of city-based recycling practices offers a formal addendum to a discussion primarily limited to traditional media reporting. There are exceptions.

A report prepared by the Bureau of Waste Prevention, Reuse and Recycling (BWPRR) for the New York Department of Sanitation, for example, offers a city-based comparison of recycling as well as the various methods of calculating the recycling rate, a description of how to incorporate commercial and construction/demolition (C&D) recycling rates, and an outline of the different city-based practices with regard to public and private recycling pickup, among other policy-related factors. The BWPRR study is not only an in-depth examination of the many decisions, programs, and group-level efforts that determine a municipal recycling programâ€™s success, but it also illuminates how recycling rates can be manipulated. Recycling C&D material, for example, that is clearly different from the material that the majority of businesses and residents are recycling can inflate recycling rates (New York Department of Sanitation 2001, 22). We see this in Chicago with Waste News 2001  Waste Report that Chicago`s recycling rate was at 47.9%, but this included an enormous amount of C&D material.

Methodologically, there are strengths of both large-scale, multi-city analyses and descriptive, case-study analyses. We attempt to account for both approaches by ultimately conducting a program evaluation of Chicago while benchmarking it to a handful of cities across the U.S. We thus account for the makeup and efficiency of Chicago`s recycling program as well as social and political factors unique to Chicago. While there are no formal modeling attempts to test for the direct impacts of these social and political factors on the city`s recycling rate (in terms of how many tons are collected or how many of these are actually baled and sold as commodities), they are ultimately referenced as we assess the Chicago recycling programâ€™s ease of access to information, educational outreach goals, and level of transparency.

The following four interdependent measures are highlighted: efficiency, determinants of the recycling rate, data transparency, and education and outreach.  Efficiency is a traditional marker of recycling policy success, namely the recycling/waste diversion rate for a municipality. To this end, we will consider changes in the reported recycling rate over time, expansion of recycling into more industries and geographic areas, and the recycling program`s ease of use for residents, businesses, and others. Determinants of the recycling rate captures the extent to which residents can recycle a variety of materials in their bins, the extent to which composting is available for the proper recycling of organic waste, and the breadth of access. Data transparency relates to the availability and access of the data upon which a city`s recycling rate is based.

Specifically, we consider the extent to which recycling rates (for public, private, residential, and commercial collection) are identifiable and trackable. Given the extent to which municipalities provide data online, we focus especially on city-based data portals. Finally, â€œeducation and outreach refers to those initiatives taken by a city to disseminate information and awareness about its recycling program to the public. This includes residents knowledge about what can be recycled and engagement in recycling advocacy with various communities across the city, both which have been found to improve recycling rates (Sidique et al. qtd. in Mueller 2013, 509).

The sample selection was based on two primary factors. Cities demographically analogous to Chicago “ New York and Los Angeles “ are joined by three of the most sustainable cities in the U.S. “ San Francisco, Portland, and Seattle. Including Chicago, all of these cities are uniform in the following ways: residences of more than four units and commercial buildings are required by law to recycle; residences of four units or less are provided with municipality-provided recycling pickup service; there is commingled (single-stream) recycling pickup with the exception of New York, where there is dual-stream collection (Fitzgerald et al., 2012, 50); and recycling drop-off sites are located in various areas of each these six cities.

Among all six municipalities, Chicago`s 2014 recycling rate is the lowest at only 11.08%( Blue Cart 2014 ). This Blue Cart rate accounts only for residential buildings of four units or less for which Chicago`s Department of Streets and Sanitation and its two privately contracted haulers are responsible. In contrast with the trend of recycling rates among many American cities, it is also notable that Chicago`s rate has decreased six percentage points over the past few years from a high of 17.18% in 2008 when the city`s Blue Cart program was introduced. Paradoxically, it was over this same period that the program was being fully implemented (Blue The three remaining cities under analysis all have notably high recycling rates. At 80%, Cart- 2008). In New York, where the Department of Sanitation picks up recycling from all residences, the diversion rate is 16.1% (NYC.Gov 2015).

In Los Angeles, on the other hand, the waste diversion rate is 76.4% (City of Los Angeles 2013, 3), with the city providing recycling to residential buildings of four units or less while owners of commercial properties are responsible for procuring their own recycling pickup. It is noteworthy that the majority of LA`s waste diversion is based on composting and source reduction rather than the traditional recycling of used goods (Ibid, 6), a point upon which we expand below. San Francisco`s diversion rate in 2012 is highest (SF Environment 2015), and is picked up exclusively through the city`s private contractor, Recology.

Portland follows closely with a 70% residential and commercial recycling rate in 2014, where a total of 37 private haulers regulated by the city are responsible for recycling collection (City of Portland, 2015). It should be noted that this rate may be inflated, as a 6% increase has been added to the rate for additional â€œrecovery credits which include home composting, waste prevention, and reuse activities that may not involve products being recycled in a traditional sense (Ibid). With recycling pickup services provided entirely by two private providers (Kennan 2014), Seattle posted a municipal solid waste recycling rate of 56.4% in 2013, which includes commercial and residential rates (Seattle Public Utilities 2015). For San Francisco, Portland, and Seattle, composting is also included in regular recycling pickup. 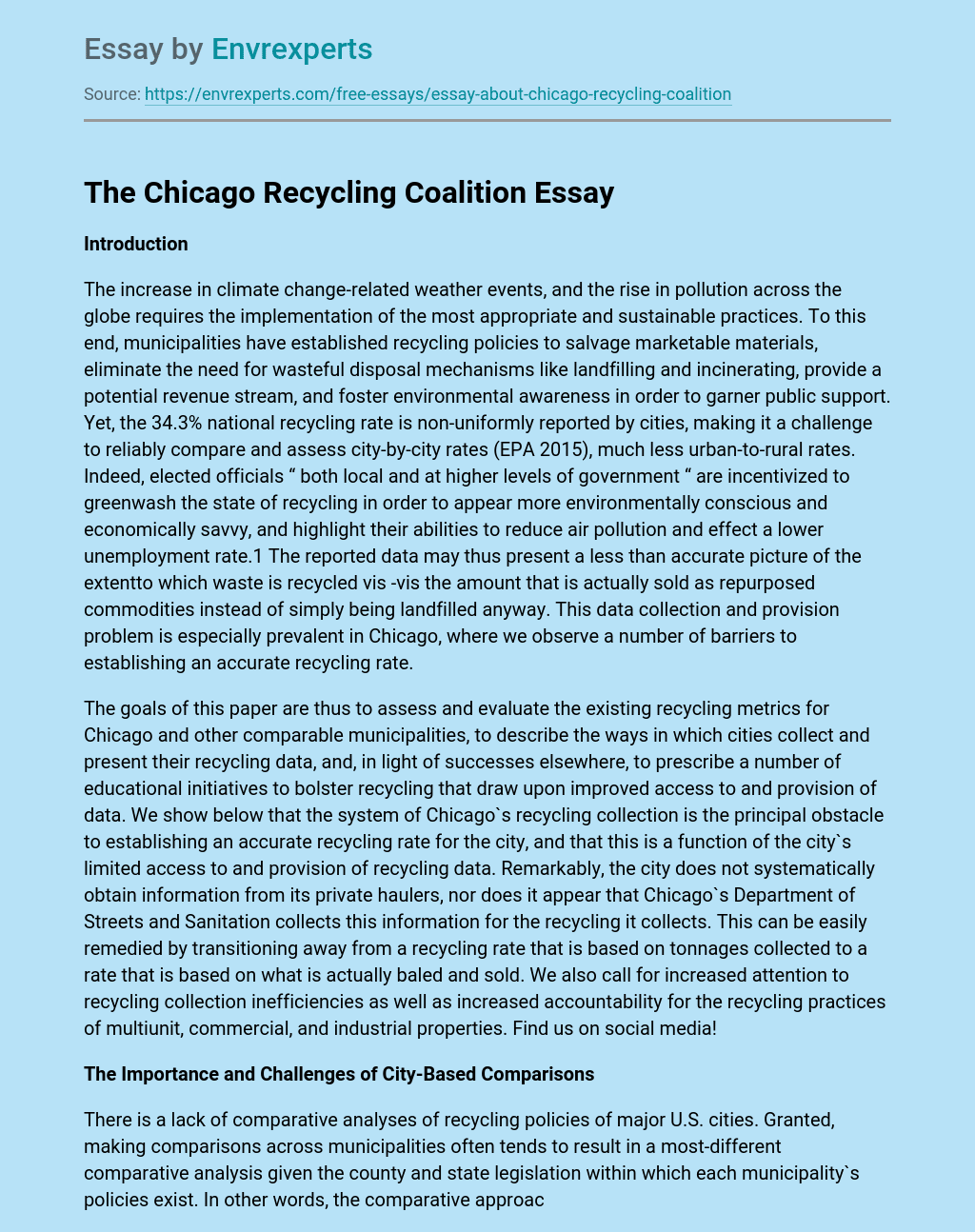