Chlorofluorocarbons As The Causes Of Ozone Layer Thinning

The ozone layer. What really is the ozone layer, and what does it do? Is it just a plastic covering over the earth? Why do we depend on the ozone layer so much for the earth s survival? Without the ozone layer there would not be life on this earth. It protects us from all the bad UV ray from the sun, so we do not get skin cancer and die. It also keeps in the heat so we would not freeze to death.

Don’t waste time
Get a verified writer to help you with Chlorofluorocarbons As The Causes Of Ozone Layer Thinning
Hire writer
$35.80 for a 2-page paper

The ozone layer is critical to life because it blocks out harmful ultraviolet rays. In the ozone there is natural nitrogen compounds being released into the atmosphere, while the nitrogen compounds are being held in, it is causing a threat to humans and the environment. Also when chlorofluorocarbons (CFC s) are released they are broken down by sunlight causing the chlorine to break down the ozone molecules. (Funk, pg. 1)

Scientists have been discovering different CFC s, which have been reducing the ozone layer. Some specific CFC s are things like aerosol cans, and also what is used in some refrigerants. For this reason CFC s have been removed from aerosol cans. (Houston Environmental Foresight (HEF) pg. 1) The first CFC to be invented was CFC-12 by Thomas Midgely, a General Motors Chemist in 1930. This CFC was used in most refrigerators by 1945. Then in the 1960 s air conditioners using CFC proliferate in homes then cars, which accounted for more CFC s than all other uses combined. (Fisher, pg. 74) Other chemicals, such as bromine halocarbons and nitrous oxides from fertilizers, have also been attacking the ozone layer. For several years, beginning in the late 1970 s, research scientists working in Antarctica detected a periodic loss of ozone in the atmosphere high above the Antarctica. The hole in the Antarctic spring and continues for several months before closing up again. In 1987, a treaty for the protection of the ozone layer was signed, and later 36 more nations joined, including the US. Then during the 1990 s a total ban of CFC s was applied to the world. To monitor the ozone depletion on the global level, in 1991 NASA launched a 7-ton Upper Atmosphere Research Satellite. Orbiting the earth at a speed of 600 km, this satellite measured ozone variations at different altitudes, and provides us with the first picture of upper atmosphere chemistry. The satellite has showed scientists that the ozone depletion is greater near the poles. (Funk, pg. 1)

Global effects Even with the ozone layer, some ultraviolet light causes disease today. Three-fourths of skin cancers could be eliminated if people would wear the correct protection while in sunlight. A type of skin cancer would be Melanoma which is usually deadly. In Texas the death rate caused by melanoma has increased by 16% from 1980 to 1988. Even though skin cancer is not an environmental threat it has become a major health problem over the years. (HEF, pg. 1)

Global climate change is expected because of an increase of levels of carbon dioxide and other toxins, which can trap heat in the atmosphere. Carbon dioxide helps control the temperature, humidity, rainfall, wind, ocean currents, and other variables of the Earth s climate. By putting carbon dioxide into the atmosphere it is expected to change mostly all of these variables for our climate. Some effects of this happening are sea level rising, increase of tropical disease, crop improvements in some areas, and bigger and stronger and more storms and hurricanes. It is not curtain when or if this action in our atmosphere and climate could happen. Also if the amount of rainfall declined because of the climate change it would decrease the fresh water supplies. If that occurred then it would help the sea level to rise even more than expected. On the other hand a climate change could make the precipitation increase. That would be a plus because it would give a better fresh water supplies and make expensive water supply projects easy to supply, which would be a kick for the economy of parts of the world. (HEF, pg. 2) The ozone layer is very important for the survival of life on earth as you can see. Even though we have banned CFC s can we really stop the ozone from disaster? People have to take another look at what we have and stop destroying it. If we do not protect the ozone we could develop cancerous sunlight, which is even greater than now. Also we could cause global warming, which could develop into the sea level rising and making human way of life extinct. Or is it our destiny to be extinct just like the dinosaurs, then develop an even more intelligent race.

Chlorofluorocarbons As The Causes Of Ozone Layer Thinning. (2021, Oct 31). Retrieved from http://envrexperts.com/free-essays/essay-about-chlorofluorocarbons-as-the-causes-of-ozone-layer-thinning 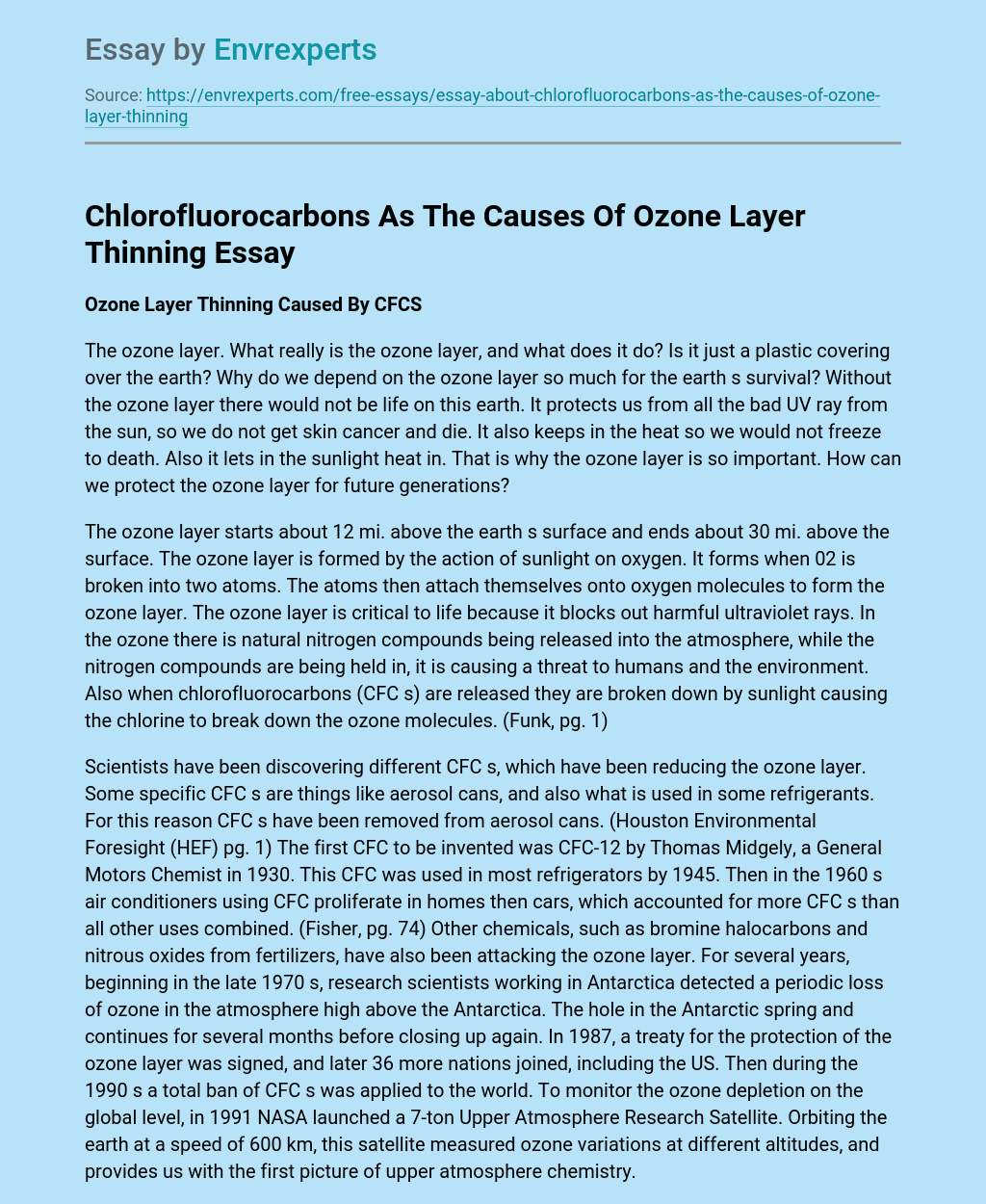