Cholera As a Bacterial Disease Spread Through Contaminated Water

Cholera causes severe diarrhea and dehydration. Left untreated, cholera can be fatal in a matter of hours, even in previously healthy people. Modern sewage and water treatment have almost eradicated cholera in industrialized countries. The last major outbreak in the United States occurred in 1910-1911 when the steamship Moltke brought infected people from Naples to New York City. Wikipedia (November 9, 2019). But cholera is still present in Africa, Southeast Asia and Haiti.

The risk of cholera epidemic is highest when poverty, war or natural disasters force people to live in crowded conditions without adequate sanitation.

Don’t waste time
Get a verified writer to help you with Cholera As a Bacterial Disease Spread Through Contaminated Water
Hire writer
$35.80 for a 2-page paper

I choose this disease because, cholera infection is often mild but sometimes can be severe if left untreated, it can be fatal in a matter of hours. The good thing is, cholera is easily treated. Death results from severe dehydration that can be prevented with a simple and inexpensive rehydration solution.

Cholera is an acute, diarrheal illness caused by infection of the intestine with the toxigenic bacterium Vibrio cholerae serogroup O1 or O139.

An estimated 2.9 million cases and 95,000 deaths occur each year around the world. Center for Disease Control and Prevention (May 11, 2018). This bacterium’s natural habitat is brackish or saltwater, the structure of Vibrio cholera is gram-negative and comma- shape. Cholera is highly contagious so the affected individual will have to be isolated from others to prevent the spread of the bacterial.

Causes of infection The bacteria are transmitted between humans through the fecal-oral route and are contracted by ingesting food or water contaminated with pathogenic forms of Vibrio cholera (Kaper, Morris, and Levine 1995).

The Vibrio cholera, which is gram-negative and a comma-shape bacteria secrets a toxin, which targets receptors in the human intestine, and this is responsible for the pathology characteristic of the disease. No human or organ is directly affected by the bacterium responsible for causing cholera, but the bacterium produces an exotoxin which causes cells in the intestine to excrete large amount of water producing watery, and classically “rice water” diarrhea, it is the toxin that causes the problem not the bacterium per se.

Symptoms Cholera is an extremely contagious disease that can cause severe acute watery diarrhea. It takes between 12 hours and 5 days for a person to show symptoms after ingesting contaminated food or water. Cholera affects both children and adults and can kill within hours if untreated. Most people infected with Vibrio cholera do not develop any symptoms, although the bacteria are present in their feces for 1-10 days after infection and are shed back into the environment, potentially infecting other people. Cases often present with mild symptoms, although some patients experience profuse watery diarrhea, nausea, abdomen pain, lethargy and vomiting.

Due to the short incubation period of the bacterium, however, severe cases that are left untreated experience a massive loss of bodily fluids, which can quickly provoke dehydration, shock and eventual death (Sack et al. 2004a). According to Cash et al., a minimum Vibrio cholera inoculums of bacteria is required to develop symptoms of cholera (i.e., provoke diarrhea in healthy volunteers with neutralized gastric acid) (Cash et al. 1974). Researchers have estimated that every year, there are roughly 1.3 to 4.0 million cases, and 21 000 to 143 000 deaths worldwide due to cholera.

World Health Organization (January 17, 2019) Treatment of cholera Quick access to treatment, such as Oral Rehydration Solution (ORS), is used to successfully treat most cases, and intravenous fluids and antibiotics for severe cases; Hydration is the mainstay of treatment for cholera. Treatment will consist of oral or intravenous solutions to replace lost fluids depending on how severe the diarrhea is. Antibiotics, which kill the bacteria, are not part of emergency treatment for mild cases. But they can reduce the duration of diarrhea by half and also reduce the excretion of the bacteria, thus helping to prevent the spread of the disease. Nayana Ambardekar.(July 27, 2019)

Cholera prevention and control Effective cholera prevention and control interventions are well known and rely to a great extent on the implementation of integrated and comprehensive approaches that involve activities both inside and outside of the health sector. Safe water supply and adequate sanitation and hygiene are the important routes for the control and prevention of cholera infection. Community engagement for behavioral changes and improved hygiene practices would help to prevent an outbreak.

Also, an enhanced epidemiological and laboratory surveillance to identify endemic areas and detect, confirm, and quickly respond to outbreaks would go a long way to prevent the spread of the Vibrio cholera bacteria. Immunization with Oral Cholera Vaccine (OCV) is one of the best ways to prevent an outbreak. The World Health Organization (WHO) considered using cholera vaccines which has been available in the 1980s to control large, active cholera outbreaks. The government of Guinea has partnered with the global charity Médecins Sans Frontières (MSF), also known as Doctors Without Borders, to vaccinate more than 100,000 people—making it the first time an oral cholera vaccine is used in Africa to control an active epidemic.

Cristina Luiggi (June 12, 2012). Misconception of cholera Some people have this misconception that, one can also be infected by cholera through personal contact with an infected person. This is false. The disease can only be contracted through contaminated water or food. Some also believe that cholera epidemics are caused by dead bodies after a disaster. This is also not true. The truth is, an outbreak happens as a result of poor hygiene. Posed question Could we ever succeed in eradicating cholera from the globe?

Creativity (Wow Factor) The most surprising thing I discovered about cholera is that, it can kill within hours if not detected early and left untreated. Conclusion Cholera is a preventable disease since it is transmitted through ingestion of contaminated food and water. Unfortunately, despite tremendous advancements made in our understanding of the disease and its causative organism, we have not been able to prevent its spread by providing clean water and sanitation. As a result, the disease continues to haunt people living under poor socio-economic conditions. According to World Health Organization, a strategy to control and end cholera by 2030 has been launched by the Global Task Force on Cholera Control. This strategy seeks to reduce cholera deaths by 90% and to eliminate cholera in many countries by 2030.

Cholera As a Bacterial Disease Spread Through Contaminated Water. (2021, Oct 31). Retrieved from http://envrexperts.com/free-essays/essay-about-cholera-bacterial-disease-spread-through-contaminated-water 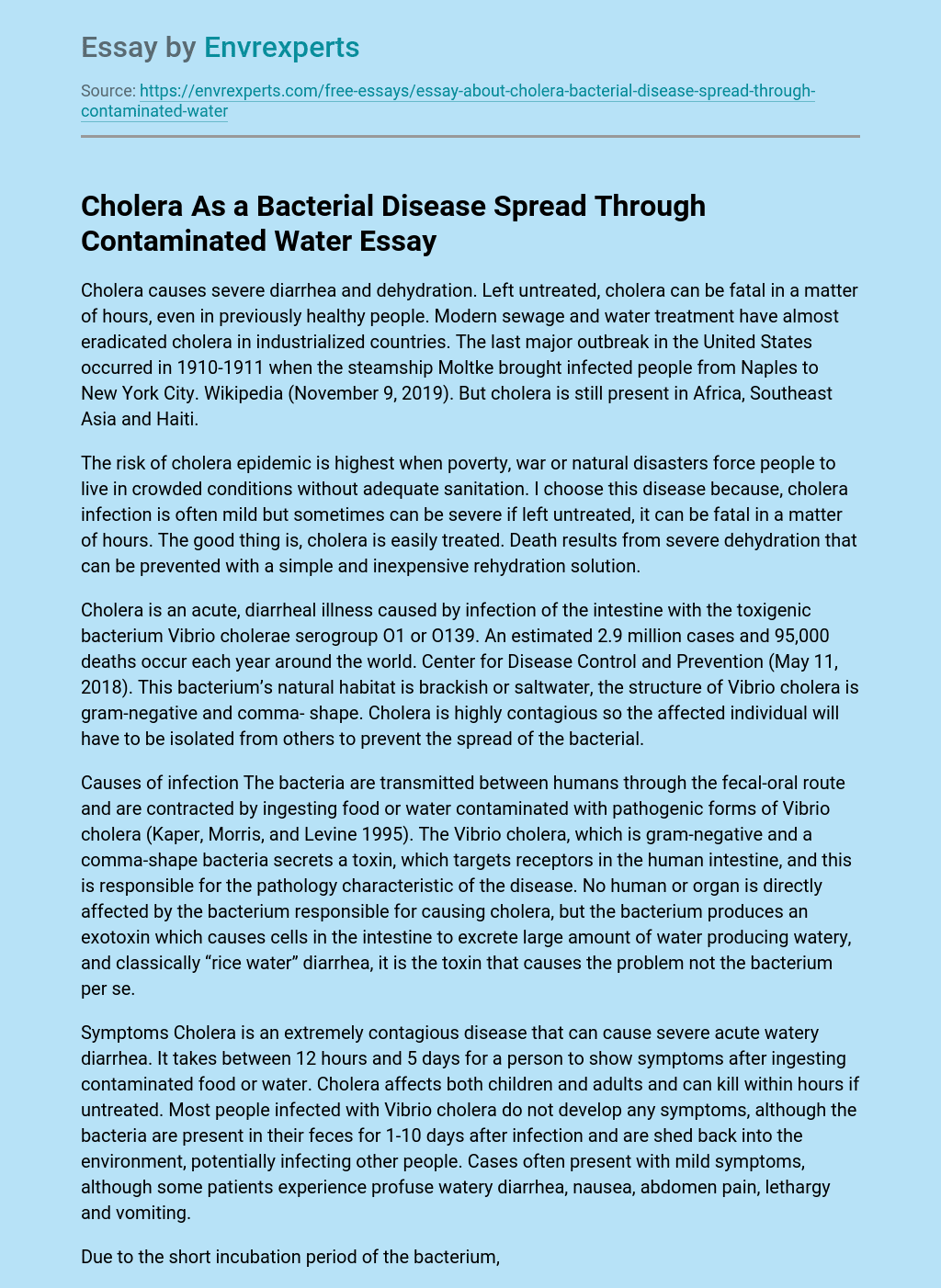