Climate Change Along With Other Human Activities

A research study done by Yanhu He et al. (2013) in the Dongjiang basin, South China aiming to assess the temporal and spacial features of land use change and climate change along with other human activities, on runoff in the target area. Study area chosen for this study was four sub-basins included in the Dongjiang basin, such as Shuntian, Lantang, Jiuzhou, and Yuecheng.

Drainage of this basin was 35,340km2 and the basin contained nearly 562km long mainstream with nearly 0.039% of an average slope.

Don’t waste time
Get a verified writer to help you with Climate Change Along With Other Human Activities
Hire writer
$35.80 for a 2-page paper

Independent impacts of land use and climate variables in study areas were compared. Climate of the study area belongs to subtropical category and a value of 21○C has recorded as the mean annual temperature. Variation in annual rainfall over the basin observed as 1500mm to 2400mm, from dry season to wet season respectively.

Most prominent soil type of the basin was alluvial while some other different types also available to be observed. Mann-Kendall test method used for trend analysis by taking major climate variables based on more than 50 years of climatic and hydrological data.

SCS monthly model used to simulate the run offs occurred due to two different reasons such as natural events and human activities for each basins.

Thus each impacts on runoff change due to land use change, climate change and other human activities separated using below calculations; 21431252540 Data analysis revealed that precipitation is the major contributing factor for the runoff in the Dongjiang basin.

In the other hand, sunlight, temperature and evaporation had negative correlations for the runoff. Temporal and special fluctuations of land use change were analyzed during 1980 and 2000 using the ArcGIS spatial analysis technique. This figure emphasize that in 1980, forest and farmland belongs to the major components of the basin, allocating 64.56% and 22.33% of area respectively. Other types of land such as garden, meadow and water accounting for less percentage of 5.94%, 4.71% and 2.28% respectively.

These other types of land reduced in 2000, while urban land and farmland usage were increased. In the period of 1980–2000 there is a significant increment of urban land and a small increment of farmland usage while major reduction in forest area were characterized. 170497500 Hydrological response has been affected by land use change depend on rapid socio-economic development. It became the reason of variability of water resources within the area. Curve number (CN) value used to express he runoff yield capacity as a simulation in the land cover containing continuous special distribution.

After CN value analysis, climatic data of 1970-1976 was used to calibrate the monthly SCS model and validated using acceptable set of parameters for manual calibration method for the period of 1977-1978. right9575800One of the sub basin of the study area, the Shuntian sub-basin demonstrated the following comparison among observed and simulated runoffs during the calibration and validation periods. Simulated hydrograph almost coincide the observed one with matching peak flows.

Researches obtained an acceptable overall model performance in the study area which can be depend for reconstructions on natural runoff. Difference between monthly runoff obtained by using the SCS monthly model, due to land use change simulated in a graph during 1980 to 2000 regarding each sub-basin. Each sub-basin showed varied runoff change with relevance of variation scope derived from the CN value of the basins. right1714500 right 295275

Climate Change Along With Other Human Activities. (2021, Oct 31). Retrieved from http://envrexperts.com/free-essays/essay-about-climate-change-along-other-human-activities 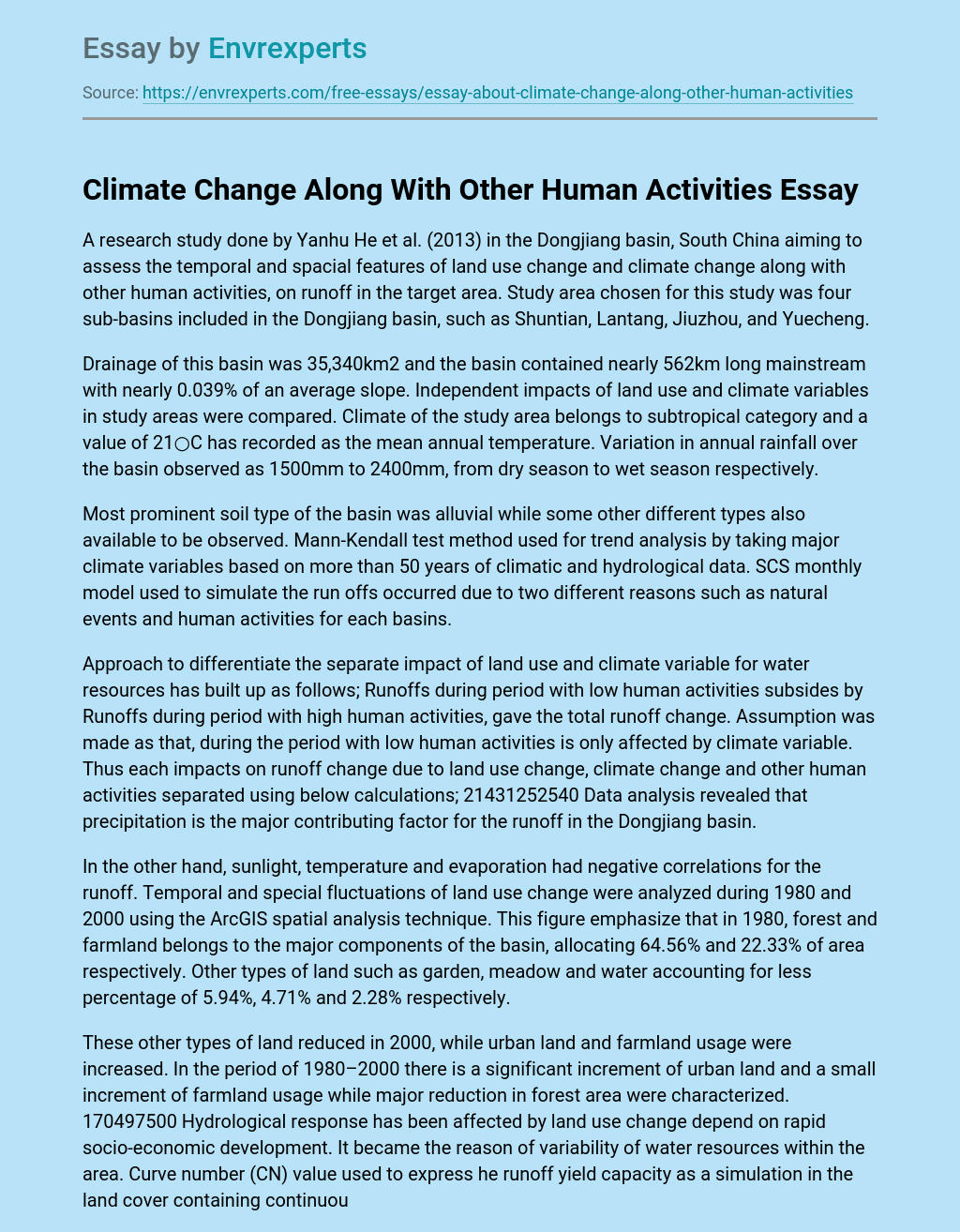