Climate change is the process by which Earth’s climate changes and it has been an ongoing issue for many years now.

The Earth's climate has been changing ever since it formed billions of years ago, so why then, is there concern for it now? Historically, Earth's climate has undergone changes through a variety of mechanisms such as changes in axial tilt, perturbations in its orbit, or dust produced by volcanoes or asteroid collisions blotting out the sun.

Recently, however, the concentration of greenhouse gases in the atmosphere have been dominating the direction Earth's climate goes in. Gases such as water vapor, methane, and carbon dioxide have been produced in massive amounts by human activity over the past few centuries, causing Earth's climate to change much more rapidly than it would under ordinary circumstances. This acceleration means that many of Earth's species cannot adapt to the rising temperatures quickly enough, causing them to die out.

If this process is left unchecked, it could very likely lead to rising sea levels, more destructive weather, and a mass extinction event. Greenhouse gases which are manmade are leaving a negative impact in the environment, C02 is causing drastic changes in the environment, and climate change may lead to rising sea levels which will leave Florida underwater in the future.

To begin with, greenhouse gases that mankind generates have caused a drastic change in earth's climate.“ Today, atmospheric concentrations of greenhouse gases are 40 percent higher than at the start of the industrial revolutions- 400 parts per million today, compared with 280 parts per million in the 1780’s, with three-quarters of that rise occurring over the past 45 years”(Dobbins 69) In other words, greenhouse gasses are being generated more in our day to day life and it’s only getting worse.

It’s been shown that over the past 45 years we have been creating greenhouse gases which are causing drastic changes to our environment. These gases trap sunlight in the Earth’s atmosphere, preventing it from radiating back into space, heating the planet. This is why we have been experiencing constant hot summer days instead of rainy days and this is only the beginning of this catastrophe. “Reducing the amount of disruption and damage to ecosystems and human lives therefore requires rapid and effective action to mitigate greenhouse gas emissions. Unfortunately, no matter how quickly the world cuts back on emissions, a significant amount of global climate change (and arctic warming) is already locked in.” (Stang 11) This shows, the amount of damage that greenhouse gases are doing to our environment have become irreversible. Whether we cut back on it or not the damage is already done and there is no going back to how the environment once was. The severe damage that we have done to our ecosystem will become blatantly obvious in the near future and will be written about in our future history books.

Furthermore, C02 plays a great part in climate change. “The ORNL experiment raised the carbon dioxide concentrations within the targeted plantation zones to 550 parts per million-the exact concentration that researchers say global atmospheric C02 levels will reach by mid-century if trends continue. The experiment was, essentially, a test case for forests everywhere.” (Oil & Gas Journal. May 20, 2013). Simply put, free air C02 is a technology that can modify the environment around growing plants to simulate concentrations of C02. This is very different from greenhouse efforts because no containment environment is needed. These experiments began during the 1990s, testing plant growth with increased carbon dioxide levels. Free-Air C02 Enrichment (FACE) was finally introduced in 1997 and lasted until 2009; it uses a system created by the Brookhaven National Laboratory in which utilizes things such as C02 tanks, pipes to direction C02 emissions and sensors to measure weed speeds and directions. It Is also controlled by a computer system that receives information to adjust C02 levels. This technology has arisen from the study of certain behaviors in ecosystems. For example, it has been observed that plants across the Earth retain more water and carbon dioxide when facing the increased levels of CO2. This will not get rid of climate change; however, it can stop the speeding rate and effects of climate chance. According to a Harvard University doctoral student, Andrew Keenan, “The terrestrial biosphere is taking up more C02 than it used to. So currently plants are slowing climate change to some extent” (Keenan 2017). Procedures as such allows scientists to gain more understanding on how ecosystems respond and what could be done to decrease the effects of global warming.

In conclusion, Climate change has become a huge controversy in our society as it decides how humanity’s future will play out on Earth. Greenhouse gasses have influenced climate change negatively which have caused a great deal of damage to our ecosystem and continues to do so, C02 plays a role in damaging our economy, and due to rising sea levels caused by climate change Florida may be underwater in the future. In the future many things about Earth will change due to climate change and it will be written as the next chapter of our history books as the time when Earth used to be beautiful. 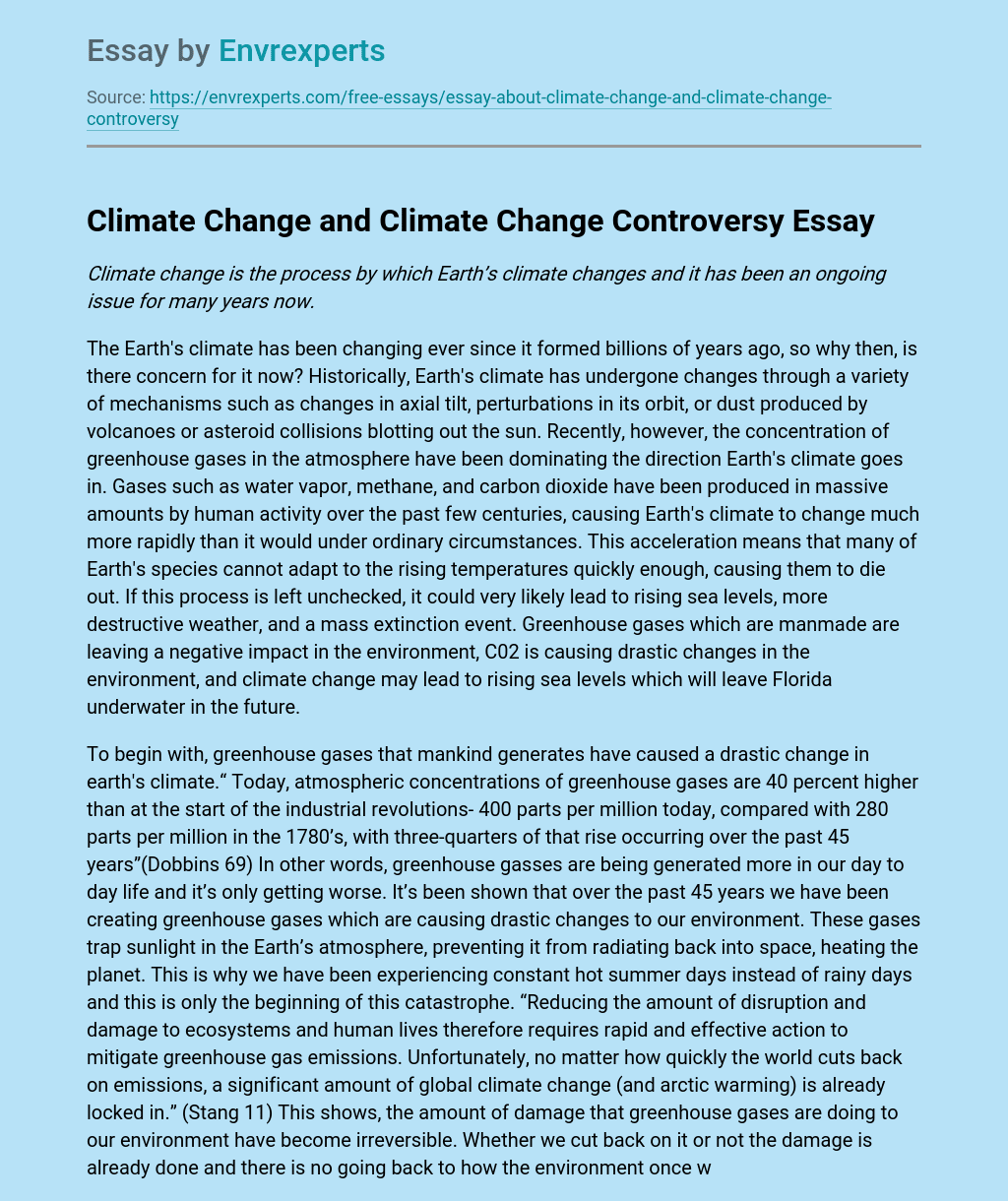