The People's Republic of China, herein as China (and abbreviated as PRC), appreciates the enormity of the subject of climate change and what this portends to sustainability of life and global peace. That is why we have dutifully participated in genuine and bipartisan approaches and engagements that involve robust discussions on this subject moving forward. Together with other world leaders, our country have participated unconditionally to in negotiations of legitimate responsivities contributions towards addressing this subject; particularly on how emissions of carbon into the environment can be mitigated.

Don’t waste time
Get a verified writer to help you with Climate Change and Environmental Preservation in China
Hire writer
$35.80 for a 2-page paper

Considering the urgency of the issue, we have even initiated unilateral actions domestically to reduce rising greenhouse emission to the environment. However, this being a global problem requires a global approach to meaningful impact. That why is as a country, it our sincere belief that this enormous task cannot be left to only one or few countries. Nations, especially the major contributors of emissions must join forces so that the initiative takes the form of a global collective action to protect the environment.

Even the non-industrialized nations need to be encouraged to be at the forefront in this initiative because in some way of another, all countries have a stake in climate change.

They are either contributors or bearing the brunt. It cannot, therefore be left to countable players. We as China, contend that unilateral measures are beneficial as outlined in our strategic plan to reduce carbon emissions.

It would also be pleasant to see other nations take appropriate measures to reduce emissions as well.

According to Cline (2011), it takes coordinated efforts and countries to protect the environment and climate; for example, the United States may promise to initiate environmental conservation through reduction of carbon emission only if China and India promises the same. Despite suspicions from other quarters, we reiterate that China is open to the possibility of making emission reductions. It is reciprocity through coordinating efforts that have coined global international climate consultations since 1992 where environmental issues were discussed at Rio Earth Summit. Tangible success was realized in 1997 during the Kyoto Protocol that initiated regulations that were binding to all nations. Despite global consultations and initiatives, greenhouse emissions have continued, and experts have revealed that it goes beyond reciprocity.

The ultimate aim is to reduce our emission levels to 5% by the year 2030. However, while underscoring the surpassing importance of collective action by all nations, PRC strong dissuades against the use of intimidation and threats to have the nations do this. It is important for countries to act unilaterally without binding obligation. This voluntary approach is more productive especially when they are convinced they are bound to benefit from such undertakings. For example, countries such as the United States and China are two of the largest emitters whose contributions amounts to 44 percent of global emissions (Cline, 2011). It is imperative for every nation to take part in this process because of its global reach. Following what Cline contends, if these reduction obligations should be voluntary, what must happen for countries to agree to buckle down and reduce greenhouse emissions? Particularly regarding China, we take an interesting position on a global carbon tax and will elaborate accordingly.

From the domestic front, PRC has been on the unilateral path and its five-year plan set targets to improve energy intensity, carbon intensity, and share of non-fossil fuels in the economy and pilot emission initiatives that are aimed at reducing considerably the contributions to climate change which is now a global problem. We want to act under a unilateral approach which provides significant competitive advantage in international markets, and will consequently serve as a good economic evidence to depict how countries initiate and implement environmental standards ahead of others (Fusaro and James, 2013). 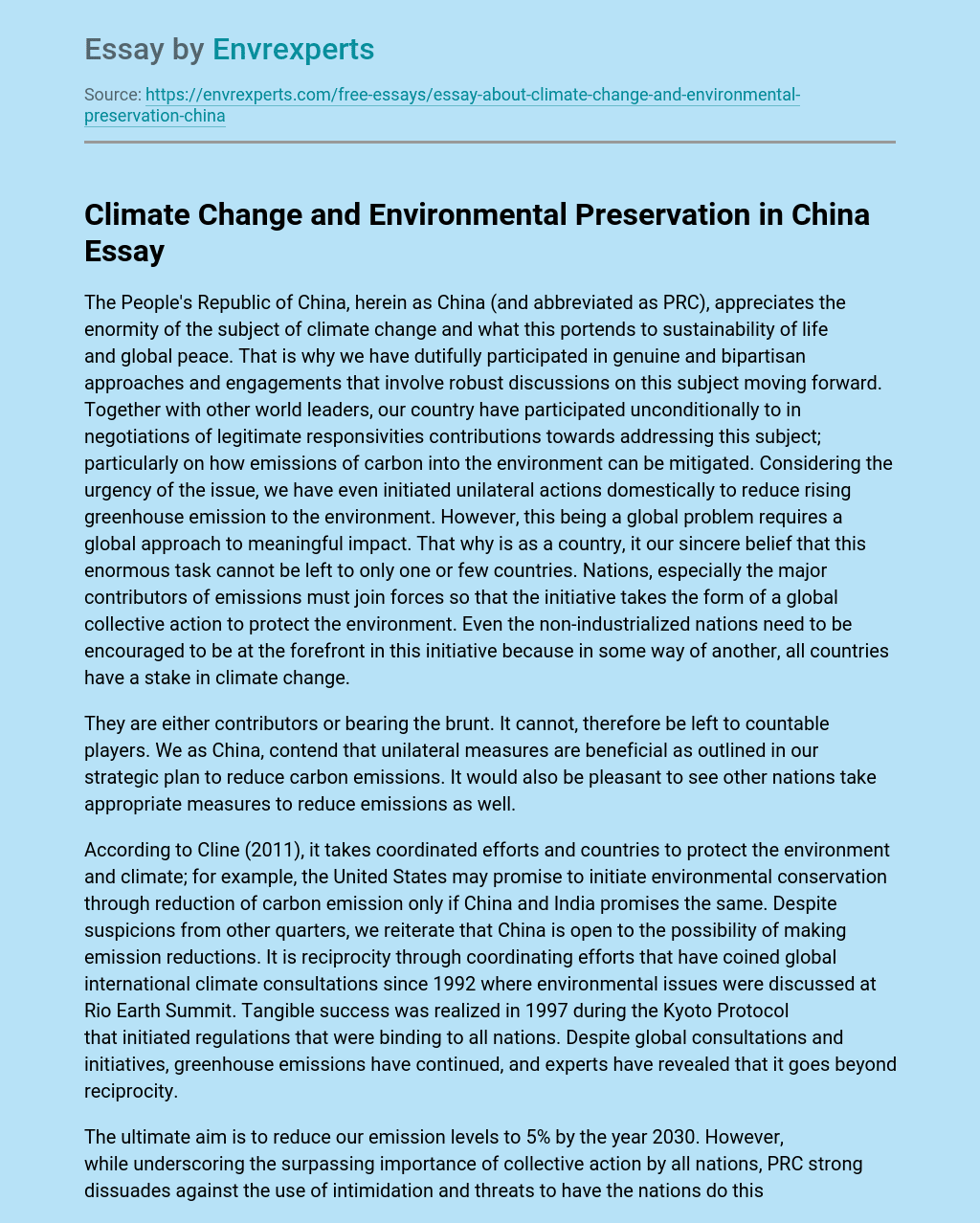