Climate is something we have all heard about and know the crux of what it is. But we fail to fathom (understand) the gravity of the situation and the effects it can have on us.\nWe all that earth is a only planet where life is possible but are we taking care of it? Climate is the average daily weather for an extended period of time at a certain location.

NASA claims that the last five years have been the warmest in the 140 years.

Don’t waste time
Get a verified writer to help you with Climate Change and Global Warming Problem
Hire writer
$35.80 for a 2-page paper

In 2019 temperatures were 0.98 degree Celsius warmer than\nthe 1957 – 1980 mean. NOAA ( National oceanic and atmospheric administration) analysis found that the average temperature across the globe in 2019 was 0.95 degree Celsius above 20th century average. Green house affect and green house case that one worth a boon for earth now become a reason for earth’s destruction. Excess of green house gases in the atmosphere due to air pollution and many other causes have lead to global climate change.

Climate change has become a death knell for the organism living on the earth we can say that it harms wildlife. As we all know that one of the major causes of the global climate change is\nair pollution. It effects everything luding human life and marine life too. The main cause of this thing is industrialization, deforestation and population growth.

Earth’s temperature is depend on the balance between energy entering and living the planets system. When incoming energy from the sun is absorbed by the earth’s system form a earth warm.

Climate change prior to the industrial revolution in the 1700 can be explained by the natural causes alone alone research indicate that natural causes do not explain most\nobserved warning especially warming since the mid 20th century. Humans are increasingly influencing the climate and the earth’s temperature by burning fossil fuels, cutting down rain forest anf farming livestock.

The other effect of climate change is depletion of Ozone layer. Climate change leads to erratic changes in weather patterns.We can reduce the effect of climate change cause due to global warming by taking few relevant preventions such as drive less (walk , bike, carpool or take mass transit more often, you saved one pound of carbon dioxide for every mile you don’t drive) it causes less air pollution. Recycle more – we can save2,400 pounds of carbon dioxide per year by recycling just half of household waste.

Check tires keeping tires inflated properly can improve the gas mileage by more than 3 percent. Every gallon of gasoline saved keeps 20 pounds of carbon dioxide out of the atmosphere. Use less hot water because it takes a lot of energy to heat water. By Using less hot water by taking shorter and cooler showers and washing your clothes in cold or warm instead of hot water (more than 500 pounds of carbon dioxide saved per year). 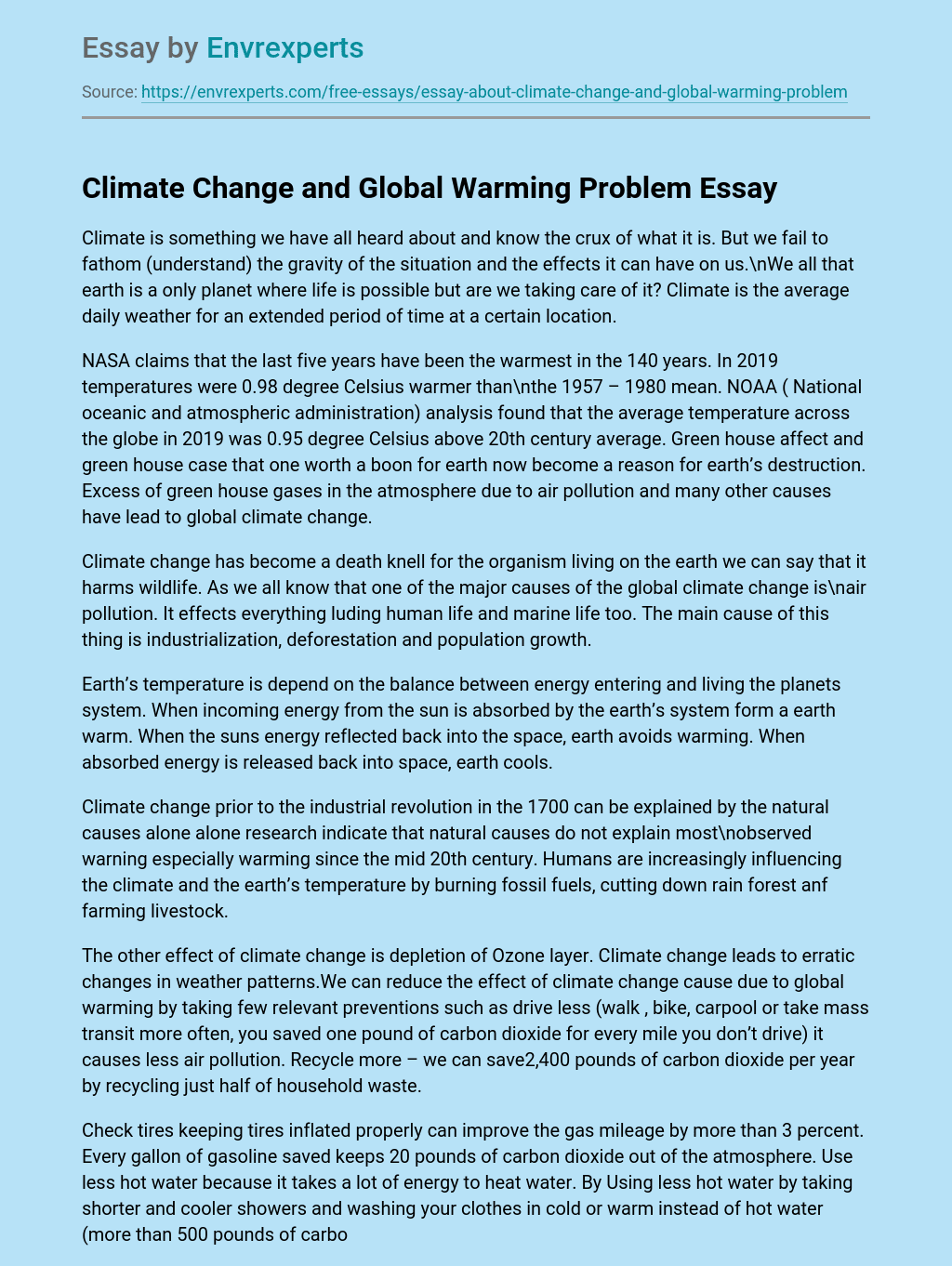