Climate change is a natural and gradual change in Earth’s climate. Climate change has many effects on earth with the most serious being global temperature rise, increasing ocean temperature, sea level rise, ocean acidification, severe storms and the declining of arctic sea ice.

Global land and ocean temperatures are rising. With a more drastic increase since around the 1970s. The increased rate of temperature change more recently is largely attributed to the increased levels of atmospheric carbon dioxide produced by the use of fossil fuels.

Don’t waste time
Get a verified writer to help you with Climate Change and Sea Turtles
Hire writer
$35.80 for a 2-page paper

So as you can see looking at this figure the carbon dioxide levels have naturally been changing over time. But more recently there has been a drastic increase and this is due to human activities.

A changing climate can have profound impacts of the running order of different ecosystems. With species abundance and distributions being the biggest shift from these environmental changes.

From arctic polar bears to coral reefs, climate change poses a threat to all types of life on Earth.

The bleached coral have reduced growth rates and have a higher mortality rate due to the stress of bleaching. This in turn can effect coral-reef fishes which depend on the coral for their food or habitat and which will lead to reduced fish populations on those reefs. This can lead to problems for fishers that depend on those fish populations to make a living and the people that depend on those fish for food. While some effects of climate change seem minuscule alone when looking at the big picture we can see how those small effects can really impact many things. While this paper will be talking about how climate change affects specifically sea turtles some of the same climate change effects will have the same negative outcomes on many marine and terrestrial animals alike. It’s important to know the effects of climate change on different species in order to properly protect its status.

Sea turtles are air breathing marine reptiles. They populate all oceans and beaches except for arctic oceans. Sea turtles have a similar build to the terrestrial turtles but sea turtles cannot retract their leg, arms and head into their shell. They have a generally large body size which helps them travel great distances and also helps protect them from predators. Since sea turtles are air breathing they lay their eggs on land (beaches). Sea turtles are also have temperature dependent sex determination which means that the temperature that their eggs incubate in will decide whether the clutch will contain more main or female ratios. More female hatchlings are associated with warmer sand temperatures while more male hatchlings are associated with cooler sand temperatures.

Sea turtles are threatened in both sea and nesting beach stages of their life. They have a lot of threats with human interference being the cause of many of these threats. Many sea turtles face the problem of habitat loss whether its from climate change and the erosion of beaches or the sea level rising and reducing the beach area. On top of these more natural ways habitat is loss sea turtles are also loosing their habitat from human causes. Building ocean walls and buildings closer to the shore are decreasing the turtles beach for nesting. Indcidental capture or bycatch my fisheries is another way many sea turtles are harmed and killed. Sea turtles will caught up in nets and if the nets are not checked right away the turtles could drown entangled in them. But even if the nets are picked up the sea turtle will still risk getting injured in the process. Poaching of sea turtles is another human induced threat. Pollution of the ocean is a huge threat to sea turtles. This can include marine debris, oil spills and different chemicals dumped into the ocean. Predation of the eggs of sea turtle nest by different animals on the beach is another threat to sea turtles. The effects of climate change have many impacts on sea turtles as well.

The united states government worked with fisheries to develop Turtle Excluder Devices (TEDs) which are bars that allow for allow for an opening at the top or bottom of a fishing net in order for the sea turtles to have a way of escaping if trapped. All U.S shrimpers are required to have TEDs on their nets. We also have different methods that help protect sea turtle nest from predators on the beach. It is important for us to try and decrease the threats of sea turtles that we have direct control over because some threats of sea turtles that happen more naturally are harder to maintain/manage.

The Main Effects Climate Change has on Sea Turtles

As climate change melts ice and warms the oceans, sea levels rise. Sea level rise projections for the end of the 21st century range from 0.18 to 0.59 meters. Even a small rise in sea level could result in a large loss of beach nesting habitat.

Sea turtles have played important roles in maintaining healthy oceans around the world for more than 100 million years. Sea turtles play an important role in ocean ecosystems by maintaining healthy seagrass beds through grazing. They maintain healthy coral reefs by removing sponges when foraging. They maintain jellyfish populations which balances the marine food web. They increase the rate of nutrient recycling on the ocean floor from breaking up shells while they are foraging. This facilitates the nutrient cycling from water to land. They also provide a habitat for small marine organisms in the open ocean. 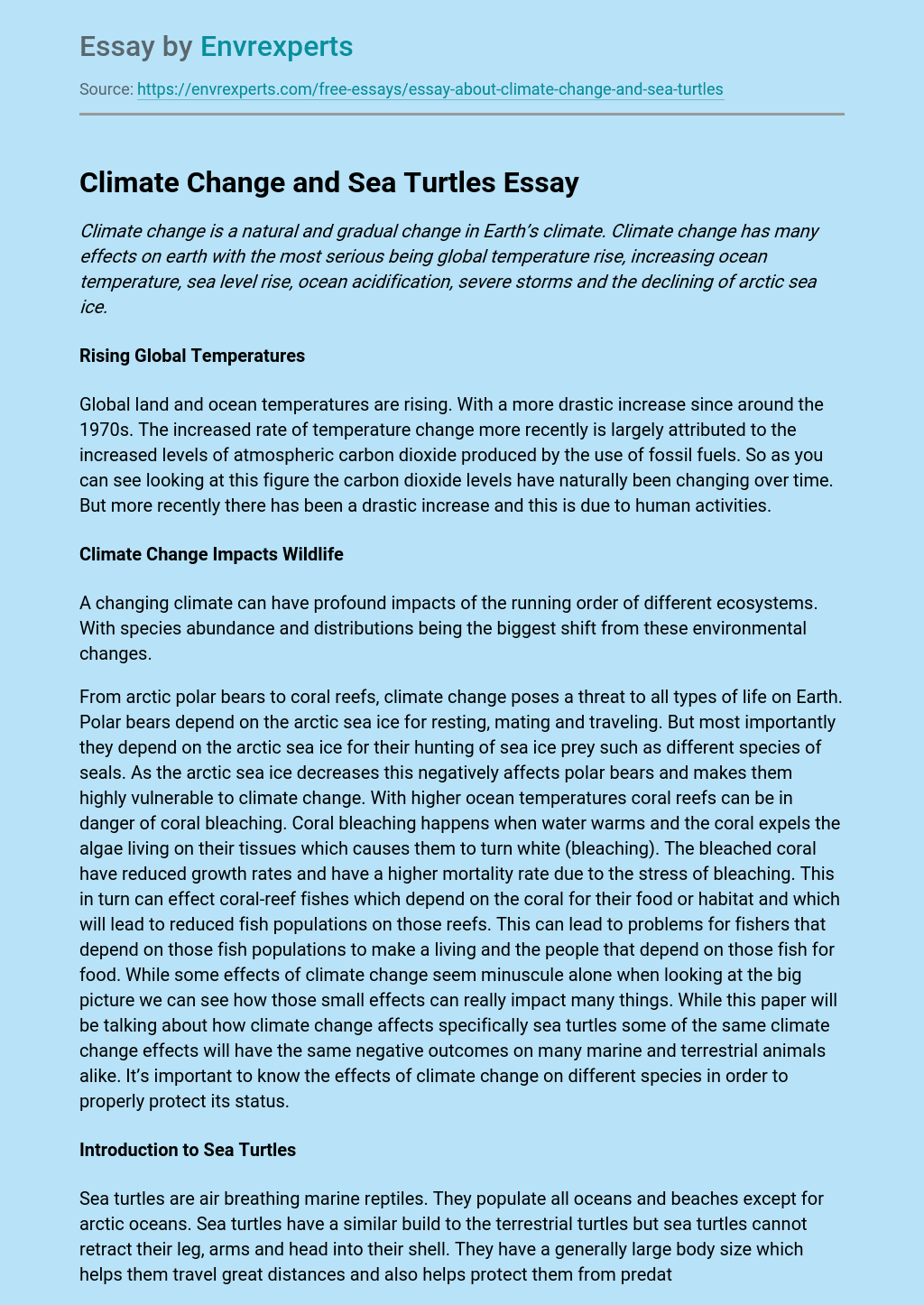