Climate Change: An Experiment With the Atmosphere

We are currently conducting the biggest, most dangerous experiment in the history of science; how much carbon dioxide can the atmosphere retain, before environmental disaster? Climate Change is not up for debate, it is happening and as Teenage activist Greta Thunberg states; it is “the biggest crisis humanity has ever faced.” (CounterCollectives, 2019)

Predictions from the UCAR Centre of Science Education warns a 3 degrees increase in average temperatures if greenhouse gas emissions remain the same, (UCAR, 2011) consequently increasing rates of evaporation by 3-5%, leading to changes in precipitation patterns.

Don’t waste time
Get a verified writer to help you with Climate Change: An Experiment With the Atmosphere
Hire writer
$35.80 for a 2-page paper

Continuing future predictions, sea levels are predicted to rise 1 to 4 feet, (Jackson, R, 2020) the Arctic Ocean will essentially become ice free by mid-century and ocean acidification has been warned to reduce to a pH of 0.14 to 0.35 by 2100.

A 2013 study published in the Journal Environmental Research Letters claimed that throughout the past two decades more than 4,000 Climate associated scientific papers supported the consensus that Climate Change is anthropogenic. That’s a 97 percentile of scientists agreeing to humans being the underlying cause.

On the contrary, evidence for the remaining 3 percentile that attempt to deny Climate Change are proven to be significantly flawed, bias or otherwise invalid. “Every single one of those analyses had an error- in their assumptions, methodology, or analysis.” Stated Katherine Hayhoe, atmospheric scientist from Texas Tech University. (Jones, B. 2017)

The ignominiously faulty results were coded and tracked into three main themes.

Firstly, scientists presented subjective data, selecting only what aligned with their conclusions, nonetheless neglecting the broader context. Secondly, data was revealed to be framed or “curve fitted” (Jones, B. 2017) due to bias data manipulation, and finally, the third theme showed that data was not credible due to insufficient experimental equipment or setup. (see right image) Queensland universities survey leader, John Cook summarises that “our findings prove that there is a strong scientific agreement about the cause of Climate Change, despite public perception to the contrary.” (Goldenberg, S. 2013)

I mean even Mike Berners-Lee’s 2019 book – There is no Planet B- explores the issues and effects of Climate Change. The Professor from Lancaster University’s Environmental Centre clarifies the urgency of transitioning into a more environmentally friendly planet. Not just for ourselves, but for our children and their future generations as well. And he’s right. If we continue to allow waiting to become our biggest habit, our planet will continue to change one degree at a time.

Each increasing degrees dragging us further into the heatwave. Dragging our lives further into danger, and dragging our planet, planet A, the only planet we have to live on, closer to environmental disaster. Why is it that modern day society has established such blind trust in the overwhelming scientific evidence when it comes to climate change?

Over a century ago, our world was oblivious to how life on Earth began and evolved. We were perplexed about the structures and functions of atoms and why they existed. Nonetheless, it was these fundamental discoveries that shifted our modern-day perspectives, allowing further scientific breakthroughs to be made.

For example, The Health editor of the BBC News website informs that the discovery of DNA’s structure allowed Scientists to ‘modify the genes of a young girl to cure her cancer.’ (Gallagher, J. 2015) – What’s my point? Until now we have honoured Earth’s scientists, in the interest of improving our lives and more importantly our future generations lives. So why would the global issue of Climate Change all of a sudden be any different?

US President Barack Obama warned that “no challenge poses a greater threat to future generations than Climate Change.” (United Nations, 2015). This is not only an environmental crisis but a social, cultural and economic problem for both cause and consequence.

For the sake of your children and their future generations we must do something to combat climate change, NOW! The causes of Climate Change are extensive and intimidating. We live in a privileged world, some more so than others; with the reliance on transport and the tendency to over purchase, the most influential cause of Climate Change is sheer laziness and greed.

Focus on one degrees at a time instead of the entire heatwave. The down to Earth guide to improving change is about sustainability. It’s about making conscious decisions with the Earth’s well-being in mind. The choice is yours. You can choose to believe the increased temperatures, rising sea levels, rainfall pattern alterations, ice depletion and wildfires just to name a few are all false accusations.

Or, you can choose to believe the overwhelming evidence of science and make a change. Before it’s too late! I pledge that with gratitude I will approach Climate Change, for my everyday life matters more than I may even realise. I hope you can do the same, but if you chose to victimise yourself, be prepared to suffer the consequences.

Climate Change: An Experiment With the Atmosphere. (2021, Oct 31). Retrieved from http://envrexperts.com/free-essays/essay-about-climate-change-experiment-atmosphere 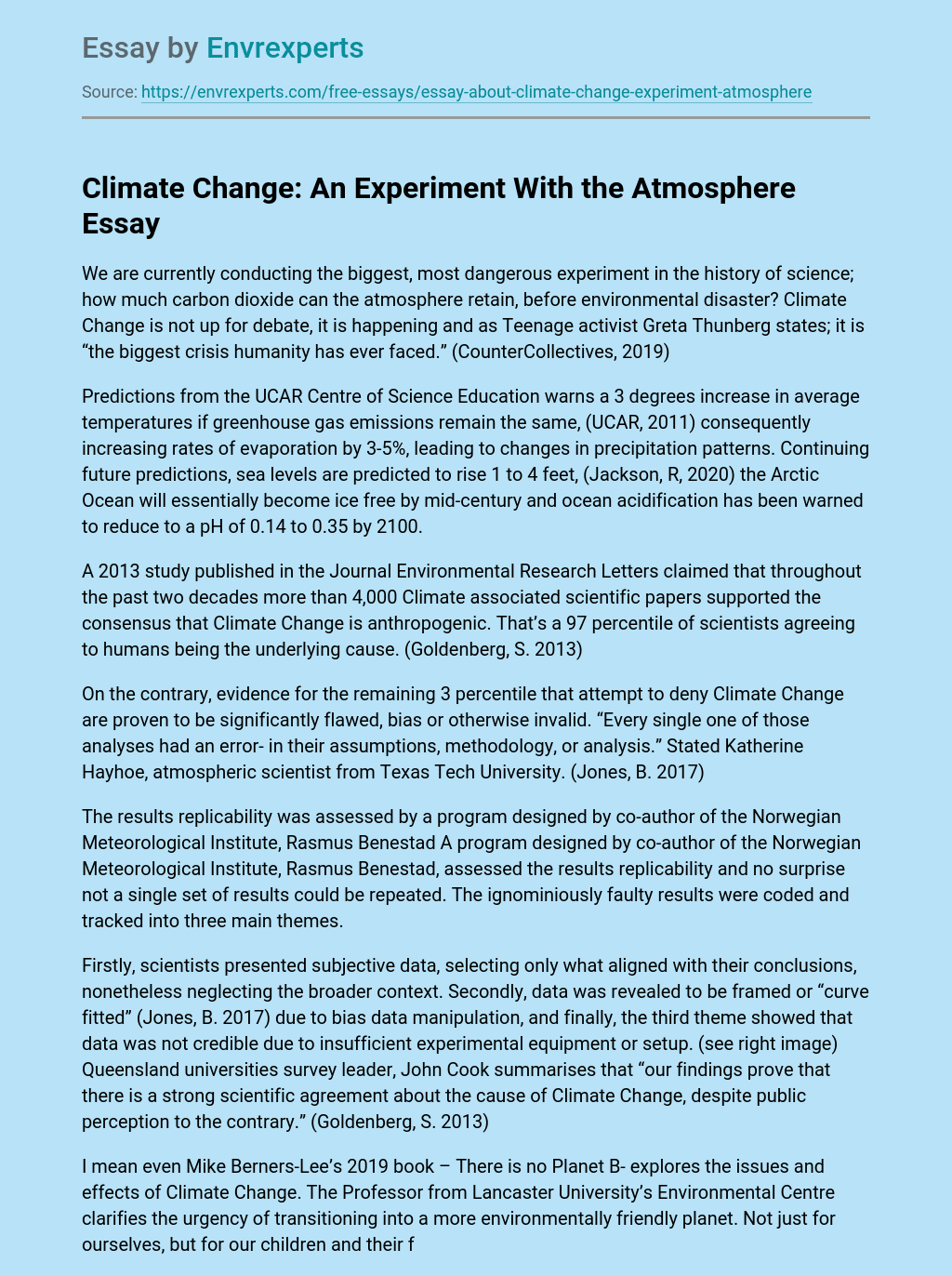