Many people threw/throw trash in the streets and not care because they think it won\'t affect anyone or anything. Well your wrong you doing that for years has changed the world for the worse with increase in average temperatures and temperature extremes, ice melting, oceans getting dirty, and glaciers have shrunk, ice on rivers and lakes is breaking up earlier, plant and animal ranges have shifted and trees are flowering sooner. With all that going on people still choose to not believe global warming is real they believe that everything is fine but I just don’t want to see the next generation deal with a situation that will be irreversible if we don’t do anything.

Don’t waste time
Get a verified writer to help you with Climate Change & Global Warming
Hire writer
$35.80 for a 2-page paper

Global warming is (coal, natural gas, oil, etc.) that are burned from cars and other gas using vehicles. Since carbon dioxide is pollution (that heats up the Earth) it causes heat by itself infrared radiation that causes heat and makes it so it is hard for the sun rays to escape.

What that will do is trap all of the carbon on earth making it much hotter. National Geographic says “The heat in 2016 broke the historic record set in 2015, which broke the one from 2014.” We are only getting hotter with the carbon here on earth. National Geographic also says “Last year\'s average global surface temperature, compiled from measurements made by thousands of weather stations, buoys, and ships, was 1.69 degrees Fahrenheit warmer than the 20th-century average.” Satellites probing the atmosphere also have written down a clear warming trend.

People tend to not believe the facts but more than nine out of ten climate scientists agree carbon emission cause global warming. Due to high temperature, the sea level is rising but it is not from the sea ice because its already in the water it’s melting land ice. National Geographic says “The total sea-level rise of eight or nine inches since 1900 has contributed to a sharp increase in flooding along coasts.” If you think so what the sea level is rising what is it going to do well during superstorm sandy floods and winds caused $68 billion in damage on the U.S. East Coast. National Geographic says “The big threat is the ice sheets covering Greenland and Antarctica.” We would lose cities if we don’t do anything about global warming because of the 200 feet ice sheets covering Greenland and Antarctica.
The change in temperature is going up from 1920s average temperature at 0.21° C to 2000s average temperature 0.82° C. Justin Worland says “ Warmer air holds more moisture, which creates the potential for bigger storms” if there is bigger storms then certain places everywhere will get flooded and the coverage will bring problems for the economy. The problem is the government doesn’t want to do anything about it. Justin Worland says “In previous elections, climate change was essentially a nonissue. A Pew Research poll released three weeks after the 2008 lows caused found that just 1% of Americans ranked the issue as the nation’s most important problem. Eight years later, Hillary Clinton and Donald Trump debated three times without facing a single question about climate change. Justin Worland says “The Democratic state senator has lived in this city on Iowa\'s eastern border his entire life, and as he drives me down Davenport’s empty back roads, he calls how it has been defined by its most powerful resident, the Mississippi River. Lykam, 69, points to the little adaptations that have sprouted over the decades, designed to make life on the river bearable: a dirt barrier one business owner constructed to prevent flooding; elevated homes resting awkwardly on cinder blocks. But this past spring, the combination of persist rain and high-water levels from fast-melting snowpack causes Davenports lever system to fail.” It’s clear to the government that the problem is real and not stopping they think it’s bearable and it can be stable but it can’t be because of all the carbon that big corporations that are involved with the government they won’t get involved with the problem. The persistent rain and high-water levels don’t come once and leave they come multiple times. Lykam says “They call them 100-year\'s floods. We’ve had three of them in the last 15 to 18 years.”
We can’t talk about climate change without talking about the health impact. The climate crisis is a threat multiplier. Adrienne Hollis says “Thousands of communities nationwide -often low-income or with many residents of color-that already face environmental risks constantly grapple with issues that others seldom encounter with the same intensity. These include exposure to air pollutants (like particulate matter and soot produced from burning fossil fuels) or soil and water contamination ( caused by dumping coal ash or lead in the water supply).”The issue is that networks will in general be methodically focused on when enterprises and guidelines choose where to assemble unsafe waste destinations, control plants and waste incinerators. It doesn\'t help that these populaces frequently need access to crisp produce, medical coverage, moderate homes, open transportation and financial chances but can’t get access to it. The health risks are dangerous “it has been linked to chronic conditions, such as kidney disease, depression and chronic obstructive pulmonary disease, and can shove the body’s response to existing environmental assaults into overdrive” says Adrienne Hollis. For instance, individuals with asthma frequently experience more assaults during extraordinary warmth and chilly climate. As environmental change keeps on adjusting ailment designs and upset wellbeing frameworks, it\'s impacts on human wellbeing will get harder to overlook. Hollis says “We need policy changes that drive a just traction to a clean-energy economy and protect vulnerable communities from the impacts of climate change. At-risk communities should be given. Access to economical renewable energy; programs for affordable, climate-friendly heating or cooling options; and strong resilience measures to better cope with climate impacts.” Hollis is right with all the government is doing to us we should at least be provided with economical renewable energy it is key to move forward to a better and safer world as we go head-on with climate crisis.
In conclusion, Global warming a worldwide temperature alteration, the slow warming of Earth\'s surface, deforestation, glaciers melting, extreme weather, raising sea levels, dirty oceans, seas and air, is brought about by human action, primarily the burning of fossil fuels that pump carbon dioxide (CO2), methane and other ozone depleting substances into the air. Deforestation, glaciers melting, extreme weather, raising sea levels, and dirty oceans are all what climate change and global warming impacts. 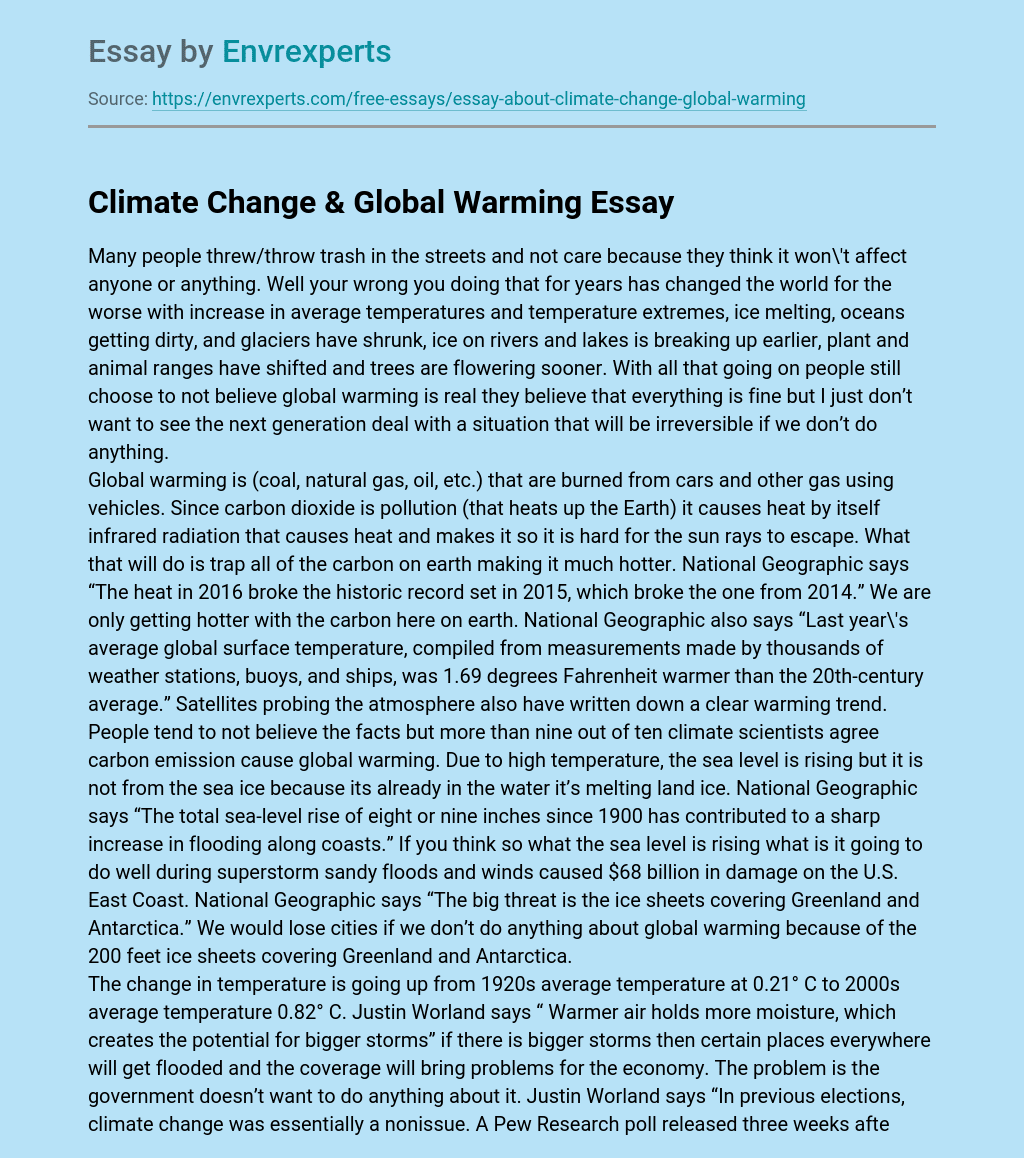