Climate change is characterized as the distinct change in climate patterns in particular regions of the earth or as in relation to the earth globally.

In order for a climate change to occur, the pattern or alteration of normal weather patterns must be sustained for an extended period of time. In the event that the atmospheric temperature gradually increases in a specific region of the earth for a observable time period, a climate change has occurred. Over the last century, climate change has had many impacts on our world at hand, particularly on specific habitats or ecosystems.

Don’t waste time
Get a verified writer to help you with Climate Change Impacts Biodiversity
Hire writer
$35.80 for a 2-page paper

Climate change impact on biodiversity is through alterations in temperature and weather patterns. According to Meg Michelle, as climate change altars temperature and weather patterns, it will also impact plant and animal life (Michelle, 2018). As temperatures continue to slowly rise, the number and range of species will either begin to adapt and adjust or they will steadily decline. Due to the complexity of our ecosystem and purpose each species plays in the life cycle, one particular plant or animal life cannot be singly affected.

In turn, other plants, animals, and even humans will begin to feel the strain of climate change in various ways. Human activities also have an impact by increasing greenhouse gases, which in turn increase temperatures. Throughout the last half-century, numerous attempts have been made by mankind to alter traditional fuel sources, l patterns, and bi-products of man-made materials. Recycling binds, electric cars, and even transportation regulations have been established in an effort to minimize the globalized greenhouse effect.

As the climate changes, the arctic will become ice-free, sea levels will rise, and more droughts and heat waves will occur.

The Arctic serves as a refrigerator to the rest of the world (National Snow, 2018). In the past few decades, over 30% of the ice have melted. As the ice melts, it creates dark holes. These dark holes increase temperatures around the world due to the water absorbing the suns rays instead of bouncing it back into space to cool off the rest of the region. The polar bears, seals, and penguins are losing their land. As the ice melts, it increases the sea levels. Acid levels begin to rise due to the carbon dioxide being released. These increasing acid levels are also negatively affecting the coral reefs and the whole community of calcifying species.

Sea levels are rising for two main reasons: glaciers and ice sheets are melting adding water into the ocean and the volume of the ocean is expanding as the warm water rises (Climate Change, 2017). Almost 40% of the US population lives along the coastlines. With hurricanes and tropical storms, these rising sea levels could affect these coastal towns by flooding the streets and businesses. As the sea level rises and moves inland, the shoreline will shrink. This could effect the sea turtle populations, as they are unable to build nests with no land to come onto (Changing Climate, 2018). The marine life will lose part of their habitat as the shorelines move inward.

As the arctic continues to melt, this causes higher temperatures to be dispersed throughout the world resulting in heat waves that cause droughts (Heat Waves, 2017). The increase in heat and droughts causes a high risk of wildfires. Wildfires wipe out many animals homes, as well as their food. With the rise in high temperatures, it is harder for animals to cool off at night thus causing them to have strokes. The water table is decreased causing the animals to have less water to drink. Agriculture is affected due to the decrease in rainfall. People and animals are losing their means of hydration.

With climate changes, the arctic will become ice-free, sea levels will rise, and more droughts and heat waves will occur. If we cannot control the greenhouse gases that are rising, the climate changes will be detrimental to our world. Human life and plant life will steadily decline with these results.

As previously stated, climate change is characterized as the distinct change in climate patterns in particular regions of the earth or as in relation to the earth globally. As scientists examine weather patterns or alteration of normal weather patterns, they begin to realize that climate change is occurring at a small but steady pace. As earth’s atmosphere continues to fill with various gases that have been created by man, the atmospheric temperature of the earth will also continue to gradually increases. Over the last century, climate change has had many impacts on our world at hand, particularly on specific habitats or ecosystems. It is paramount that we, as humans realize the importance of our roles and responsibilities in positively altering our climate change. Moving forward, we must attempt to not only minimize climate change, but hopefully to reverse some of the effects that are already being felt by our ecosystem. 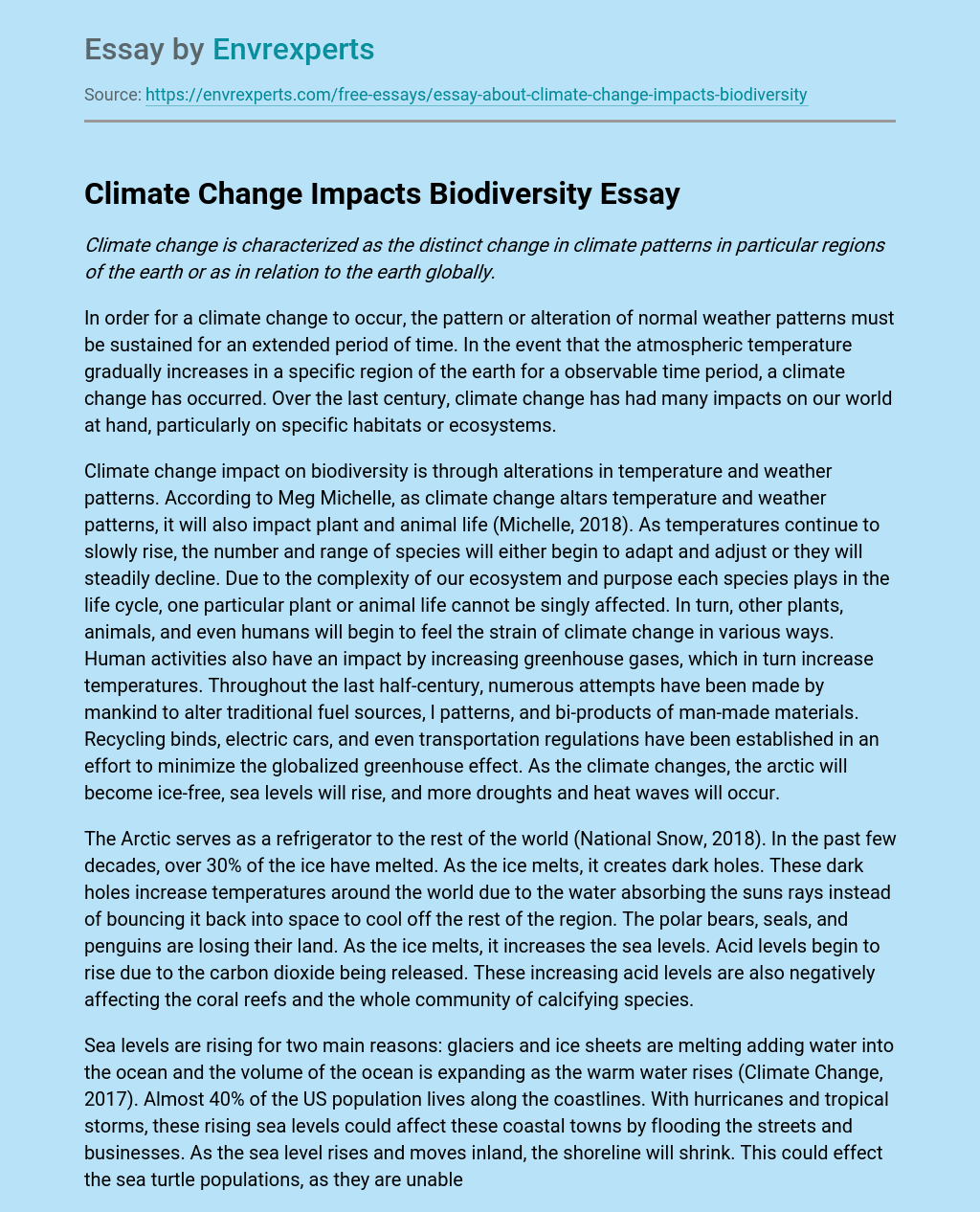