Climate Changes through the History

Climate Change Throughout Geological Time: For the last 2 billion years, Earth’s climate has alternate between frigid ice and steaming hot like the world of the dinosaurs. If certain types of rocks like coal which need abundant rainfall forms under climate condition like rainforest or temperate forest, that tells us method used to determine ancient climates.However, this timeline represents changes in climate throughout geological time.

Early Cambrian Climate ( 540 Million years ago). Early Cambrian climate is not well known, because the climate was not very hot nor very cold and there is no evidence of ice at the pole.

Don’t waste time
Get a verified writer to help you with Climate Changes through the History
Hire writer
$35.80 for a 2-page paper

Early Ordovician Climate (480 million years ago)- This is a mild climate that probably covered most of the globe. Then, the continents were flooded by the oceans creating warm, broad tropical seaways.

Early Silurian Climate (420 million years ago)- This early Silurian climate has coral reefs that thrived in the clear sunny skies of the southern Arid belt. The coral reefs stretched across North America and Northern Europe.

As the conditions lingered, glacial conditions prevailed near the South Pole.

Early Devonian Climate (400 million years ago)- This early Devonian climate is generally dry conditions that prevailed across much of North America, Siberia, China and Australia during the early Devonian. It was noted that South America and Africa were covered by cool, temperate seas. However, during the late Devonian (360 million years ago), Pangea began to assemble, in the tropical rainforest in the Canadian Artic and Southern China, thick coals beginning to form for the first time.

While glaciers covered parts of the Amazon basin, thus was located to the south pole.

Early Carboniferous Climate- Early Carboniferous climate shows why Pangea move northward, and the climate belts move southward. So, tropical rainforests cross from Artic Canada to Newfoundland and Western Europe. Then, the desert regions in the mid-North America begin to contract while Southern Hemisphere begins to cool off.

Early Permian Climate (280 million years ago)- As early Permian climate begin to establish, much of the Southern Hemisphere was covered by ice as glaciers pushed northward, and coal was produced in both Equatorial rainforest and in the Temperate forest. This happened during the warmer “Interglacial” periods. However, in the late and medium Permian climate, the equatorial rainforest had disappear as desert spread across central Pangea. Even after the southern ice sheets were gone, an ice cap still covers the North pole.

Early Triassic Climate- Early Triassic Climate is the interior of Pangea; it was hot and dry. However, warm temperature climates extended to the poles as it was assumed the hottest times in Earth history. At the very end of Permian, rapid global warming may have created a super- “Hot House” world that caused the great Permo-Triassic extinction. Note that 99% of all life on Earth perished during the Permo-Triassic extinction. During late Triassic climate, global climate was warm, there is no ice at either North or South pole. Only warm temperature conditions extended towards the poles. Early and Middle Jurassic Climate – During early and middle Jurassic, Pangea Mega-monsoon was in full swing and the interior of Pangea was very arid and hot. During this period, Amazon was once a desert and Congo forest.

Also, China was surrounded by moisture directional winds as lush and verdant. Early Cretaceous Climate- As noted, early Cretaceous climate was world of mild “Ice House”, that was climax in snow and ice during winter seasons, and cool temperature forests covered the polar region. Early Paleocene Climate- At the time of early Paleocene, climate was warmer than today that was why tree grew in Greenland and Patagonia. Swamps in the Mangrove of southern Australia were located at 650 souths of the latitude.

Early Neogene Climate (24 million years ago)- This time period mostly saw a drastic cooling that continuing to be felt into the Pleistocene Epoch of the present period. Antarctica was covered by ice and the northern continents were cooling rapidly. Modern World- At this period of Quaternary, we are entering a new phase of continental collision that ultimately result in the creation of a new super continental Pangea of the future. As we are leaving the ice age, we are beginning to experience global warming because of the planet is continuing to add greenhouse gas. Credit Information: All information generated for this article is credited to Christopher R. Scotese.

Causes of Climate Change- The Earth has experienced climate that is always changing and as we continue to debate the causes and implications, climate change has come to refer primarily to changes we seen over the years and as a result of human behavior (Letcher,T. M.,2009). So, to enable us to digest the causes of climate change we must first consider ‘global warming’ as of the primary causes which lead us to understand that carbon dioxide has fossil fuel and other industrial processes generate almost 65% of greenhouse gas. These may tell us whether greenhouse gasses really are predominantly cause of the recent rise in Earth temperature.

Emission of large amounts of greenhouse gas (carbon dioxide and methane) into the atmosphere is partially responsible for recent trends in the climate of our planet (Letcher,T. M.,2009). Another change is the changes in coral reef ecosystems as evidence of negative climate and global change. The major threat to the integrity of our reef systems has been considered to be excessive fishing and pollution (Martin J. Attrill, n.d). The rising sea level is also an indicator of negative climate change. The question is why the sea rising?

I believe many factors contribute to the rising sea level the planet is experiencing today. According to International Panel on Climate Change (IPCC), the main contributors to sea-level rise are melting ice from glaciers and ice caps with small amount Greenland ice sheets. Others include, ocean acidification, ocean current changes, plant ecology, marine biodiversity, sea temperatures amongst others. Impact of Climate Change on the Future- Applying knowledge of past climate change to predict future impact; I believe we can achieve that by determining how the past climate history is distributed from ancient coal, desert deposit, glacier materials, sea level, tropical soils, or global temperature.

Over billion years, the Earth has experienced multiple climate changes that is now define how we live under current climate condition. However, to apply knowledge of past climate change to predict future impact we must acknowledge the global average temperature of the future to increase by about 0.20 C per decade. Greenhouse gas will continue at about current rate but increase in temperatures and many other climate changes. Global average sea level is expected to rise by 18-20 cm by the end of the century. Warming is expected to be greater over landmass on the northern latitudes. Other predicted climate change on the future includes acidification of the oceans, more frequent sea waves or reduced snow cover and sea ice. Human activities may as well caused sea level to rise to about 7m.

Climate Changes through the History. (2021, Oct 31). Retrieved from http://envrexperts.com/free-essays/essay-about-climate-changes-through-history 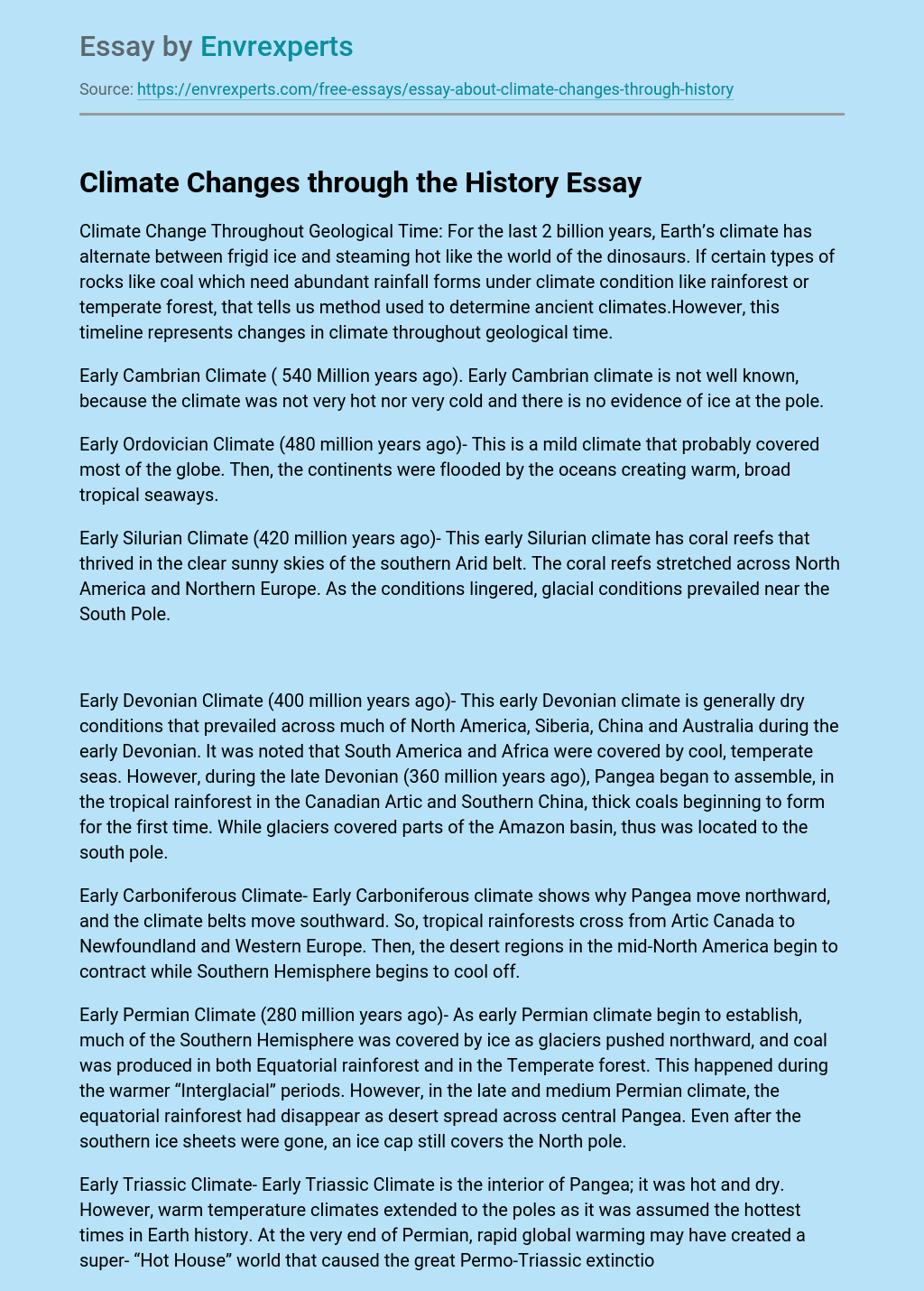