4.7 (235)
hire verified writer
Don’t waste time
Get a verified writer to help you with Coliform Form of Bacteria
Hire writer
$35.80 for a 2-page paper

Some forms of coliform can cause mild sickness and a few of these types of bacteria can lead to serious waterborne diseases (“Coliform Bacteria,” PennState Extension, 2016). Coliform bacteria are typically called “indicator organisms” because they indicate the possible presence of disease-causing bacteria in water. The presence of coliform bacteria in water does not mean that drinking the water will cause an illness.

The existence of this bacteria presence means that a contamination path exists between a source of bacteria and the water supply. The path of this bacteria can be things such as septic system, animal waste, surface water, and more (“Coliform Bacteria,” PennState Extension, 2016). Disease-causing bacteria use a path to enter the water supply (“Coliform Bacteria,” PennState Extension, 2016).

E-coli and salmonella are forms of fecal coliform in animal and human intestine. Testing can be conducted to determine specific types of bacteria. Fecal coliform bacteria are specific to the intestinal tracts of warm-blooded animals, including humans. Fecal coliform testing is conducted with a specific test for contamination in sewage or animal waste (“Coliform Bacteria,” PennState Extension, 2016). E- coli is a type of fecal coliform bacteria commonly found in the intestines of animals and humans (“Coliform Bacteria,” PennState Extension, 2016).

The Mayo Clinic advises that E-coli as a somewhat healthy and beneficial intestinal bacteria, but some strains of it like E-coli O157: H7 can make people sick (Mayo Clinic, 2019). E-coli can create significant issues within the human intestine. A study in Brazil found that when chicken feces contaminate water it can cause 11 different viruses and diseases (Department of Medicine Brazil, 2009). One of these bacteria is E-coli O157: H7 and its effects on the body can be nausea, abdominal pain, and diarrhea (Mayo Clinic, 2019).

Coliform can be found in a variety of places. Coliform can be found in common places in the soil because of bacteria from animal waste that are washed away during rainfall (Cedar County, ND). However, fecal coliform which comes from the intestine of warm-blooded animals is much more present in the surrounding areas of animal farms like hen houses (Cedar County, ND). According to the Environmental Protection Agency (EPA, 1989), the normal level for coliform in water and soil is none or very low.

This is because any higher level could cause an outbreak endangering the community in the surrounding area according to the Environmental Protection Agency (EPA, 1989). Scientists have found that the weather and climate impact the growth of coliform bacteria (SciELO, 2016). Through contamination testing done for coliform bacteria in the soil in Poland, researchers found that bacteria in soil from chicken feces were affected by the weather and climate. Researchers found that the cooler temperatures during the winter months allowed for more bacteria growth.

The study showed that the soil 15 and 45 meters from the hen house contained no coliform in the summer, but in the winter months, coliform was found at both distances (SciELO, 2016). These results were due to the relatively low humidity in the winter months (SciELO, 2016). This study was contradicted by a study in South Korea of fecal coliform in soil (ResearchGate, 2018). This study showed a 25.1% increase in coliform growth after a temperature rise and a 53.3% increase in coliform growth after an increase in precipitation.

The changes in bacteria level depending on the season and weather conditions need to be considered when testing for bacteria in soil, including coliform (ResearchGate, 2018). Coliform can be found near commercial hen houses (SciELO, 2016). There are thousands of hen houses in Arkansas (University of Arkansas Division of Agriculture, n.d.). Arkansas chickens are the largest segment of the poultry industry with chickens being produced in 53 of the 75 counties in Arkansas (The Poultry Federation, n.d.).

Arkansas was ranked second in the nation for chicken producing with over one billion chickens being produced (University of Arkansas Division of Agriculture, n.d.). Also, according to the Arkansas Agriculture Department, one county in northwest Arkansas, Washington County, has over 903 chicken houses (Arkansas Democrat-Gazette, 2018). Each of these houses contain an average of 25,000 chickens per house (Chicken Check-in, 2018). This means that this one county has over 22.5 million chickens that produce about 215 million pounds of chicken feces every month (Washington County Conservation District, n.d.).

There have not been any complaints reported on any chicken farms from Washington County for 2018, although it has been identified as a high hazard to runoff chicken feces (Washington County Conservation District, n.d.). If this runoff does occur, it requires a more extensive treatment of the water to remove harmful nitrates, phosphates, and other contaminants (Science, 2017). 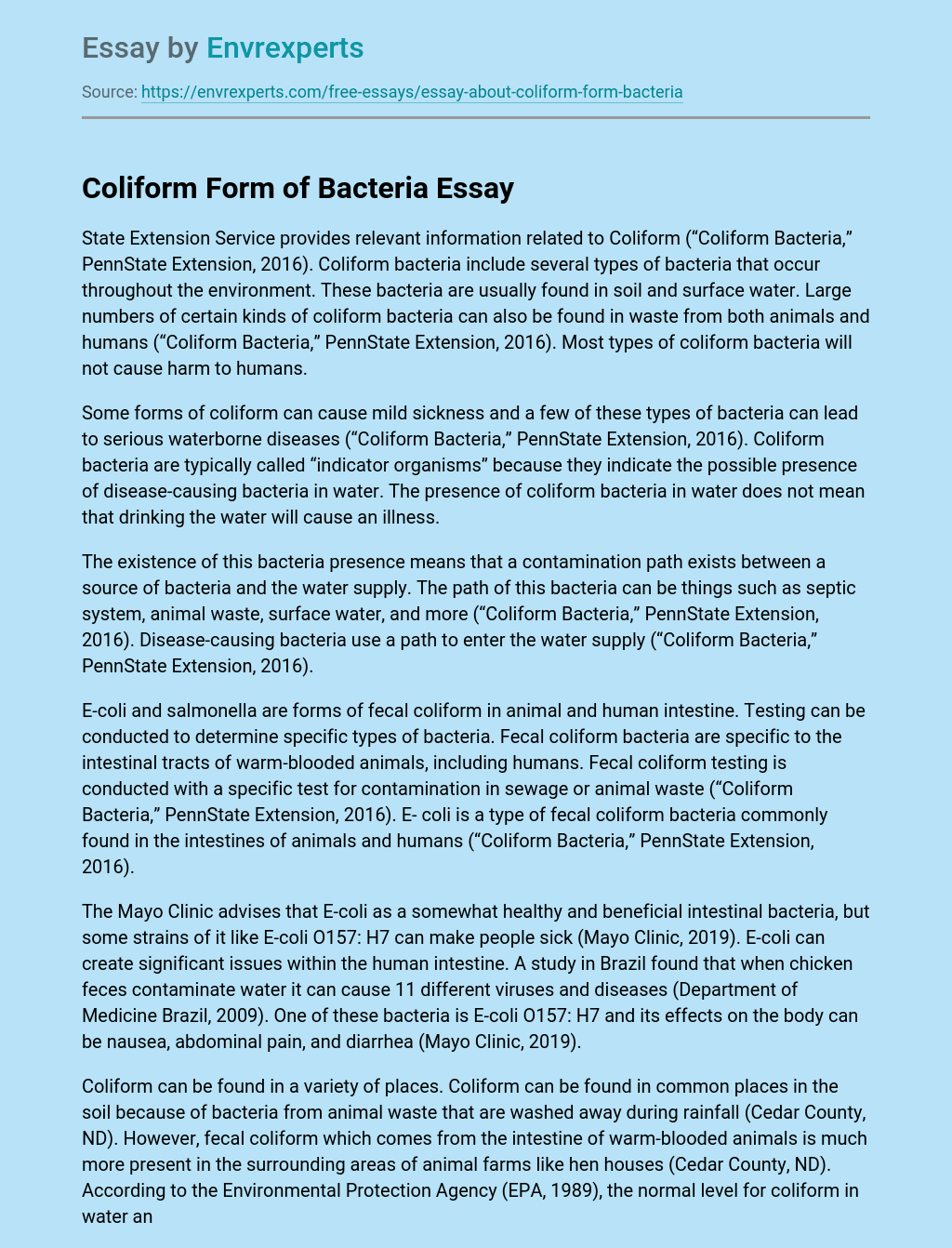