Colonization; History and Implication to Date

In this paper we will cover multiple content related to colonization. From history, different time periods in which many countries colonized hundreds of countries, Europe controlling the entirety of the world, especially the British Empire and France, constant war between the indigenous people of America and the colonizers and Asia overtaken by multiple countries. Then we will discuss in depth for what purposes did these countries colonize the lands; slavery (manual labor), natural resources and economic expansion with constant rebellion and fight for freedom all over the world form the colonizers especially in Africa and the South East Asia, both violent and non-violent cases.

Don’t waste time
Get a verified writer to help you with Colonization; History and Implication to Date
Hire writer
$35.80 for a 2-page paper

Constant wars and conflicts aside, millions were killed by diseases such as smallpox or malaria. Ending the half of this research paper within depth analysis of different types of colonization, difference between imperialism and colonization and decolonization.
The next half will bring light to the implications of Colonization that have lasted to this date. We will comprehensively discuss the case of African-American Community in United States of America, how with the passage of time colonialism has led to abolition of cultures and heritages, colossal displacement of racial identity and segregation based on the skin color.

The social stigma that has been established by the white supremacist against the African community and its effect on the community itself with the respect of finance, education, job opportunities, healthcare and to the point of basic human rights.

Colonization is a process in which a state, power, empire, or a country with superior military capabilities dominating over lands, its people and its natural resources without any laws or rule restricting them.

Many empires have risen to heights and fallen, reason may be war, famine, diseases or natural diseases. But once an empire reaches a point of certain prosperity, they begin to move out and explore out of their territories. One empire can do so much, every land has some restriction, a piece of land cannot have every kind of natural resources needed. Exploring other lands and discovering new natural resources and growing economically is every empire or realms goal.
There are many ways one can explore and develop economically, so the question rises, is there a need colonization? The need to colonize rose because it was very beneficial for the colonizers to enforce slavery and make the natives work on their behalf making it low-cost but inhumane. Necessarily, it cannot be just for the sake of economy, there are other underling motives. Colonizing can be for political, power, status, or religious reasons.
Here we will discuss a bit the mindset or psychology behind what leads to empire nations to overthrow leadership of a separate land and control and exploit the people, the land and its natural resources.
It is in the human nature, after reaching one milestone, they look for another. When the empire/nations reach a state of prosperity, it still seeks to rise further. When it came to colonization, there was a clear difference of intelligence and development between the colonizers and the colonized. With this difference, the colonizers had a superiority complex of colossal level that lead to diminish the fact that these people were in fact human. Religion also played a huge role; religious leaders lead the belief that it is okay to do so and even as going far as to saying that it is will of the ‘God’. A mix of all these lead numerous nations to be blinded by greed. Greed for wealth, land, power, status, war or glory.
All the above mixed with the fact that many colonizers were extremely advanced in their military artillery, which made it is easy for them to crush the colonized and enforce them to do their doings and under their reign. But in few cases, we can see colonizers posing as trades or merchants interested in trade only and showing no sign of hostility. Later, slowly building more prominence and position for themselves and then attacking when the empire would fall into unrest, one of its biggest examples being British Empire’s slow take over the subcontinent of South East Asia (India).
Even if we look at the world today, many countries are being exploited, the civilian population displaced, bombed, shot at, raped, kidnapped, forced into slavery, no home or education. But it is all hidden with brands such as terrorism or military exercises. It maybe that this is just a conspiracy theory, but there is a very good chance that one country falls into civil unrest or terrorism another country steps in to provide military aid, and it is seen that military has practically settled down and the natural resource of the country in crisis is exploited and using that as an excuse to exploit.

Question rises over the heading; what is the difference between colonization and colonialism? there isn’t a huge one. In both the terms, there is ‘superior people’, the colonizers and the ‘inferior people’, the colonized.
Colonialism is the theory, policy or an ideology that leads to colonization. Colonization on the other hand is the act of colonizing, in which superior people based on their superiority believe that they have the right to extort or prosecute the inferior people of what ever their demands maybe.
People of superiority can be seen having the advantage of thriving and consistently developing technologies whether it may be for the sake of war or transportation etc., intellectual and literate population in trade, economy, medicine, warfare or generally evolved in their lives and in history most of these people of superiority have been white Europeans. These people of superiority are often referred to as “settlers”.
While on the other hand the people of inferiority have been extremely under-developed in matter of warfare, medicine, trade, economy and general sense of living and most of them being illiterate.
Colonialism has existed since the time of Roman Empire, maybe even longer. We will discuss the history of colonialism in depth in the History section of this paper further ahead.

Colonialism in the light of Marxism:

Colonialism has been regarded as by Marx as "instrument of wholesale destruction, dependency and systematic exploitation producing distorted economies, socio-psychological disorientation, massive poverty and neocolonial dependency". Marxism also views colonialism as a form of capitalism.

There are main three types of colonialism, following are:
Settler Colonialism:
When a large number of population migrates to another land driven by politics, religion or economic growth, they settled down and farm lands and do not have any plans to return to motherland e.g. America and Canada.
Exploitation Colonialism:
When a large number of population is looking to exploit the land’s natural resources or manual labor for the sake of mother land e.g. British, Portuguese, Spanish
Internal Colonialism:
When a group within the states takes the initiative to colonize a part of its own people is known as internal colonialism.

We have already discussed colonialism, imperialism shares some of its aspects with colonialism. Imperialism is the theory, policy or ideology that an act (king, empire, country, government) expands its rule over other lands either by force or not. Imperialism comes from the Latin word ‘imperium’ which means to command. Imperialism is a broad idea and there are different kinds and cases and it is hard to group entire theory into one box.
In some cases of imperialism, the imperial power may not even settle down in the occupied country but simple control its economy and governance. While some may be for the case of inflicting fear into the people and for the purpose of war and chaos. Another popular case is the expansionism in which we can see the

While colonialism has been traced back to period of Roman and Greek Empire, in world history one of the greatest examples of colonialism is the 15th century and the 19th century Colonial Era of Europeans, British, French, Russian, Portuguese, Dutch, Belgian, Spanish, Swedish and Danish played major roles. By 1800, it was calculated that Europeans controlled 35% of the world and by 1914, they gained 84%.
This map paints a rough picture of the European control around the globe. It started with Portuguese leading the European countries followed by the Spanish exploration of Americas, Africa, Middle East, India and East Asia.
It was then the British, French and Dutch Republic’s turn to build their own domain and stand in competition next to each other, in doing the Europeans lead most of the world into the Colonial Era. As the empires exploited the lands natural resources, forced the indigenous people into slavery, murdered and butchered millions of people who refused, rebelled or in war for the ‘mother lands’ profit.

List of colonized area:
Now we will discuss the main actors such as British, French, Russian, Dutch, Belgian, Portuguese and the Spanish and the area colonized under their rule:

Brutality of colonizers:
Colonizers treated the indigenous people worse than animals. Basic human rights were not upheld. Most of the indigenous people would be turned into slaves those who rebel or fight for their freedom would be killed in war and prisoners would be tortured and made slaves. Slaves would be whipped, beaten, burnt, raped and killed if they refused to work in the plantations. If any slave tried to run away, they would be caught and killed. Slaves were treated like property and a huge number of natives were transported from Africa and Asia and other European colonies to work in mines and farms for the colonizers mother land or ‘metropole’. By property, the colonized or slaves would be caged and placed in front of buyers as a piece of auction. The ones that looked the healthiest or those who would manage to do physical labor the longest would be sold at higher price. Most of the slaves would be branded, a permanent mark on their bodies made by beating or a burnt mark made by a hot object, a sign that this human belonged to or is property of the colonizers. Slaves had been displaced from their native land, they were boarded on ship like cattle and travelled on sea for days to be sold in an unknown place as an object.

This chart shows an approximate number of slaves that were transported by the European Empires to their colonial destinations Most of what the colonizers had done had blown the human rights out of the water. The mass scale destruction it had brought to the communities of natives had broken them. Their people displaced, killed, raped and their culture annihilated.
The colonizers also brought different disease from across the ocean such as smallpox that did not exist in the land, it led to the deaths of millions of indigenous people. But this was a double edged sword, as the colonizers also died in thousands because of diseases that existed in those lands such as malaria.

In the 1700’s, American Revolution took place which forced the British Empire to give America independence, due to their deplorable economic state because of the Seven Years of War. On 4th July 1776, America was given its independence and became a sovereign independent country.
In the 16th and 17th century, European countries colonialism had started to end due to multiple wars and bad economy
After the World Wars (1940’s), most of the Britain was bankrupt because of the war and did not have enough resources to govern their colonies which led to if not all, most of them were set free. Many adopted Democracy e.g. India divided into Pakistan, India (Bharat) and Bangladesh (in 1971, aforementioned became independent in 1947).
Decolonization came swift and ended the long period of colonialism, starting another chapter of history.

Colonization; History and Implication to Date. (2021, Oct 31). Retrieved from http://envrexperts.com/free-essays/essay-about-colonization-history-and-implication-date 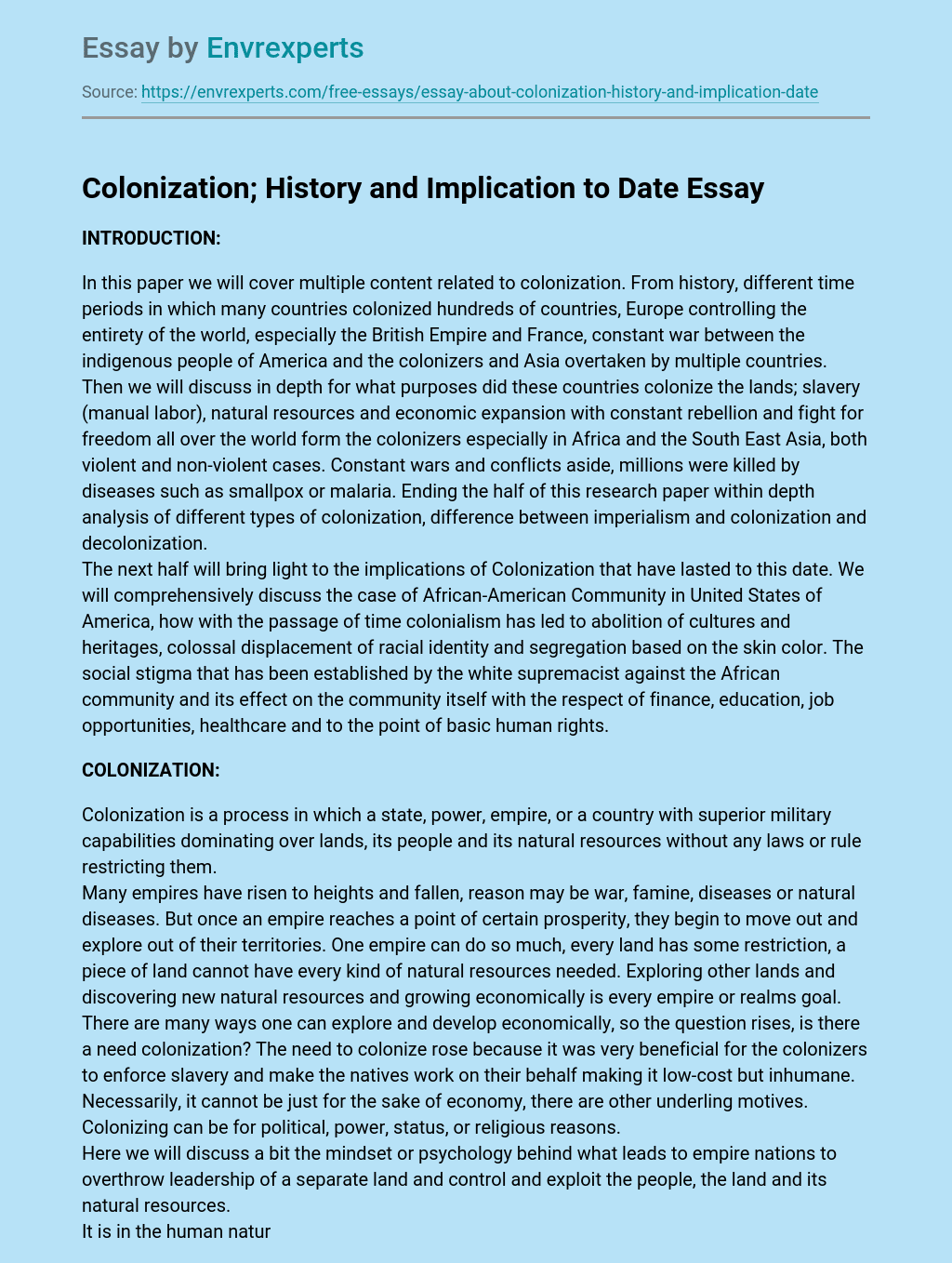