The twenty-first century is a popular era for conceptual art in response to global issues. Environmental art has brought effects of change by introducing natural and technological solutions to degradation and human activities hazardous to life on Earth. Two projects featured in To Life! Eco Art in Pursuit of a Sustainable Planet by Linda Weintraub function mainly to display visual models of the damaging effects that the economy and industry has cause. Artist Tue Greenfort and his artwork Exceeding 2 Degrees in 2007 highlighted overuse of energy and excessive emissions by using inexpensive materials with high energy costs.

Don’t waste time
Get a verified writer to help you with A Comparison of the Approaches of Tavares Strachan and Tue Greenfort to Environmental Issues
Hire writer
$35.80 for a 2-page paper

Exceeding 2 Degrees is an example of Tue Greenfort's approach for minimal art in its simplest form but with huge meanings. This artist's strategy involves both minimizing materials used in his artwork to reduce energy and economic costs and creating symbolism within his limited medium that enhances its purpose. In Exceeding 2 Degrees, the artist uses a few simple objects such as a hygrograph and a coffee table in order to direct the audience's attention to the atmosphere of the room and the changing climate of the globe's atmosphere.

Greenfort approaches his work with his view of the total biosphere beginning with the small experiences of nature then extending outwards; according to Linda Weintraub, Tue Greenfort produces environmental artworks, but keeps their focus on the combination of ecology and economy. Also, the artist sees humanity as an unimportant existence, which is why he is able to apply much attention to complicated topics like global warming and perform heavy attempts to steer humanity's actions towards benefitting the environment. His exhibition, Medusa, pushes for society to avoid monoculturization, which causes decreased habitats and less diversity. Exceeding 2 Degrees calls for more energy-efficient planes and reduced emissions worldwide to reduce current climate change. Greenfort's belief in human existence having no role in nature also gives reason to why his work centralizes on the environment.

Tavares Strachan also creates sculpture art with environmental concepts. His projects hint at human actions that affect their surroundings. The piece Distance between What We Have and What We Want consists of a four and a half ton ice block extracted from the Alaskan Arctic and placed in the Bahamas under the Sun. A steel and glass container holds this block and keeps it from melting. This entire work displays a relationship between the ice and atmosphere. The ice block represents Earth’s glaciers, and the day-time air represents thermal effects; the freezer requires high energy consumption in order to cool and points out the profuse amount of human activities causing global warming. Strachan attacks his audience with feelings of anger and inspiration by making his work excessive. This strategy appears in Distance between What We Have and What We Want when an extreme amount of fossil fuels, manufacturing equipment, and power generation costs were used to fuel the plane that transported the piece, construct the generator, and power the panels. The artist received harsh criticism for causing more environmental harm than benefit. Tavares Strachan's reasoning for a "hyper-extended action” is that the end goal is more important than the by-products of an experiment. He believes his work can inspire people to overcome obstacles. Strachan's sculpture contains a meaning similar to Tue Greenforts Exceeding 2 Degrees. Both speak about climate change. Strachan uses his ice block and chamber to point out Earth's atmosphere's powerful effect on the arctic. Greenfort uses his collection of objects to magnify the climate and its effects on Earth. These artworks bring people's attention to global warming by exaggerating. Exceeding 2 Degrees catches its audience with dramatized heat. A slight increase in temperature in the project's setting located in a country known for its hot climate caused uproar with the visitors. Tavares Strachan's work catches its audience by using an unreasonable amount of fossil fuels and high energy costs.

Distance between What We Have and What We Want and Exceeding 2 Degrees are different in material use and purpose. Tue Greenfort's work restrains from material use. He approached his project with a coffee table, paper, thin plastic, a strand of hair, and a hygrograph. His collection, although minimal, was successful in displaying temperature change. In contrast, Tavares Strachan takes the route of abundance with a colossal ice block and chamber and panels made from loads of fossil fuels. This contrast in material use comes from opposing purposes between the two projects. The reason Strachan uses a great amount of components is because he aimed this project towards reflecting human ability. The ice cube interacting with the freezer in such weather is supposed to display humanity overcoming immense environmental change. Tue Greenfort's artwork is limited in material to enhance the theme of climate change and economics. This work gives the message of the environment being more important than humanity and functions to cut harmful energy use.

Tavares Strachan presents climate change in Distance between What We Have and What We Want with obvious markers of global warming. These area piece of arctic ice, a victim of climate change, and a power-generating machine. The sculpture displays adaptation, and the artist sees this as progress. Tue Greenfort prefers not to push human ability and instead reduce industrial activity in order to preserve the environment. Maxwell Heller calls Strachan's views as

myopic, or nearsighted. He mentions the artist seeing progress at the planet's expense. Greenfort's views are more reasonable with the environment as priority. Exceeding 2 Degrees not only brings guilt to humanity for causing global warming, but it also benefits life indirectly by presenting a real example of economic change which allowed preservation of rain forests. His goal in reducing energy and material is possible to people to follow, and such action brings sustainability so the planet remains habitable for humans and other living organisms.

A Comparison of the Approaches of Tavares Strachan and Tue Greenfort to Environmental Issues. (2021, Oct 31). Retrieved from http://envrexperts.com/free-essays/essay-about-comparison-approaches-tavares-strachan-and-tue-greenfort-environmental-issues 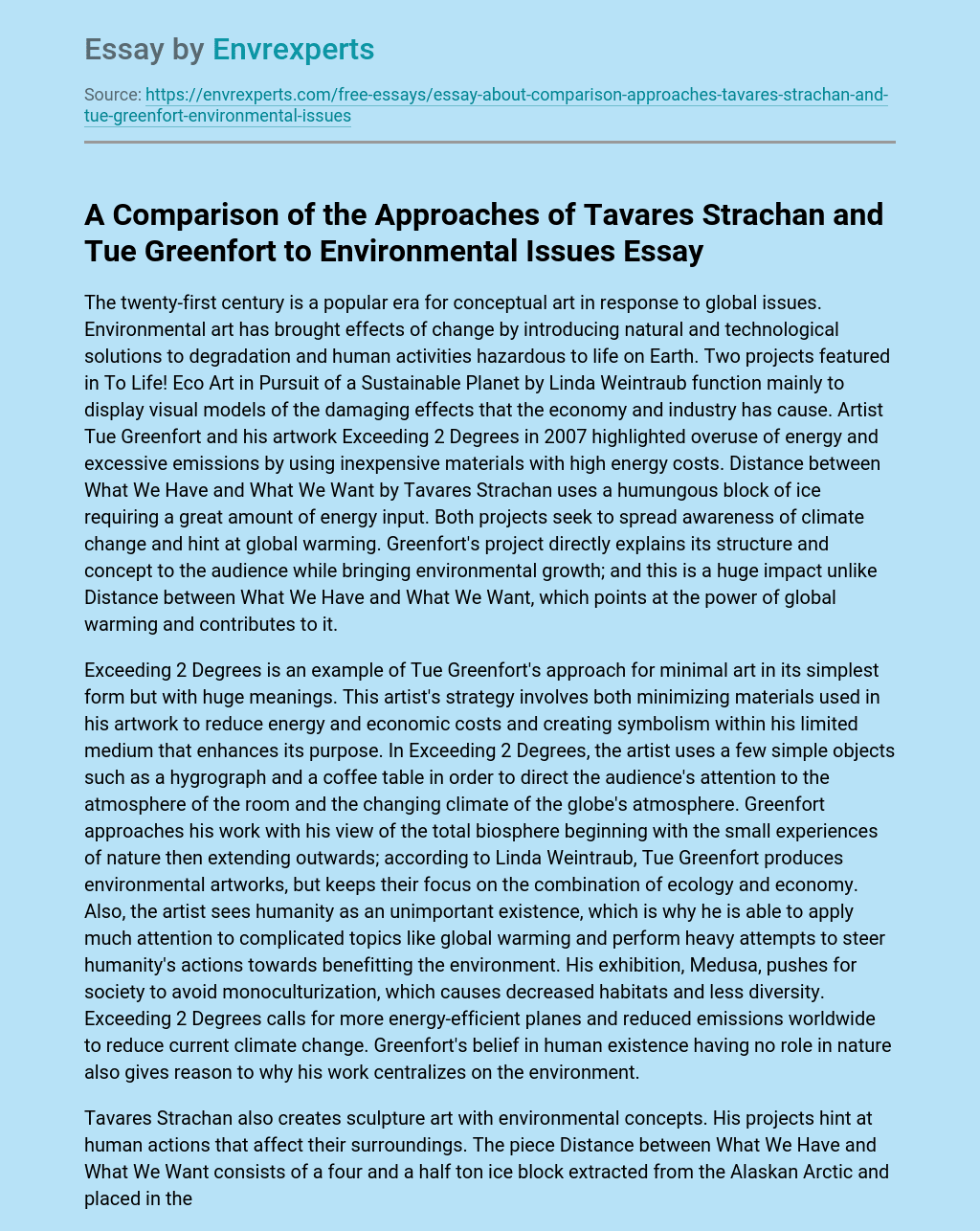