A Comparison Between Conventional and Organic Farming Using Pesticides

Due to conventional farming, individuals are consuming pesticides on a daily basis that are harmful towards our health and environment. What are pesticides? They are a form of a biocides, which by definition is “any chemical that destroys life by poisoning, especially a pesticide, herbicide, or fungicide. “We ingest pesticides every day from the food we eat. It seems contradictory that we would consume something that by definition destroys life. Conventional farming claims that the use of pesticides on food is safe, while organic food activists claim it is causing detrimental effects to the health of our bodies and planet.

Don’t waste time
Get a verified writer to help you with A Comparison Between Conventional and Organic Farming Using Pesticides
Hire writer
$35.80 for a 2-page paper

Conventional farmers focus on the argument that the nutrients we absorb from eating fruits and vegetables, far outweighs any possible risks of the toxic pesticides we consume. Consumers might deter from choosing organic foods over conventional foods, due to the fact that organic food tends to cost more and is less available. What exactly can you expect by choosing organic food? Organic food is grown without the use of biocides and causes minimal effects to the environment.

By choosing organic produce you receive the same nutrients from produce that was grown conventionally, however, the organic produce is without poisons and negative contamination to the environment. Despite the claims of safety and the mass use on commercial produce, pesticides are toxic chemicals that affect our health and environment.

Conventional farming uses pesticides as a routine part of their farming practices. According to Luis M. Alvarez, author of "It's Easy Being Green: Organic vs.

Conventional Foods—The Gloves Come Off” “Conventional farming uses chemical fertilizers to promote plant growth, spray pesticides to get rid of pests, and uses chemical herbicides to manage weeds” Alvarez). We can try to validate the purpose of pesticides in conventional farming by stating the reasons farmers choose to use them. This does not, however, change the fact that pesticides are causing harmful effects to our planets living organisms. Conventional farmers claim that pesticide use is safe and well regulated. According to the, US Environmental Protection Agencies website, pesticide use and their maximum residue limits are well regulated to stay at levels below those that would cause unfavorable effects to the health of consumers. Farming is a business, therefore conventional farmers primary purpose is to make a profit. Pesticides benefit that purpose by allowing them to have more viable crops, with less destruction from pests and weeds. The concern is, even with the benefits that pesticides offer to conventional farming by providing more viable crops; it is coming at the cost of our health and environment.

Our environment provides invaluable resources and is worth protecting from the carless damage caused by conventional farmers' use of pesticides. Rachel Carson, author of Silent Spring, states it best "The most alarming of all man's assaults upon the environment is the contamination of air, earth, rivers, and sea with dangerous and even lethal materials” (692). It seems we often take for granted the bountiful harvests our earth provides for us. Yet, we are still choosing to poison the very environment that provides our food. Rachel Carson states:

These sprays, dusts, and aerosols are now applied almost universally to farms, gardens, forests, and homes-nonselective chemicals that have the power to kill every insect, the “good” and the “bad,” to still the song of birds and the leaping of fish in the streams, to coat the leaves with a deadly film, and to linger on in soil— all this though the intended target may be only a few weeds or insects. Can anyone believe it is possible to lay down such a barrage of poisons on the surface of the earth without making it unfit for all life?

The conventional farmers' choice to continue to use pesticides is affecting our environment. The use of chemicals to control pests is an unnecessary risk, which ultimately affects all life by bringing about disease and even death.

The constant intake of pesticides in our bodies is causing diseases and many other health problems. According to David Holansky, author of “Regulating Pesticides” “New research indicates that pesticides can cause cancer, reproductive problems and developmental disorders”(Holansky). It seems disease and cancer is widespread in our current time. Since the use of pesticides was commercialized in the 1930's, the rates of cancer and disease have continued to rise. Our ancestors all farmed and survived without the mass use of pesticides in their food supply. Conventional commercial farmers are not using pesticides just to survive, but rather to produce an abundance of crops for profit. According to Holansky, “Farmers and chemical manufacturers worry that the government may go overboard with new regulations,health for profit worth the risk?

The government has approved chemicals only to find out after the fact the incredible dangers associated with them. Two specific chemicals banded after previous wide spread use are, methyl parathion and azinphosmethyl. These chemicals have been linked to the damaging children's developing nervous systems. Other pesticide classes that are now being linked to nervous system damage in adults are organophosphates and carbamates. All of these pesticides were once widely approved for use on produce such as apples and peaches. The use of pesticides data to say with certainty that the levels currently accepted are truly safe.

We can say that conventional farmers need to use pesticides to grow the amount of food necessary to feed our increasing population. We can also say that organic farming has fed our population without fail for the years before the instituted use of pesticides. Which method of farming is both effective and safe? The benefits of conventional farming are: larger yields with minimum spoilage, less labor intensive farming, chemical fertilizers allow more use of the land, and readily available foods at lower costs to the consumer. In contrast some of the benefits of organic farming are highlighted by the USDA guidelines, in the article written by Alvarez "organic farming practices are designed to reduce pollution and conserve water and soil. They do not release synthetic pesticides, which can harm wildlife, and they also seek to preserve biodiversity and local ecosystems” (Alvarez). It seems organic would be the best choice for life that thrives in our environment. Unfortunately, these benefits are also undermined by cons that tend to detour the average consumer from buying organic.

It might be argued that organic food is more expensive than conventional foods, while containing the same nutrients. Research is showing that there is actually more nutrients and health benefits in organic foods than conventionally grown foods. According to a study by UCDavis, “Organically or sustainably grown berries and corn contain up to 58 percent more polyphenolics, natural antioxidants that are a natural defense for plants and may be good for our health” (UC Davis). Research is growing in this field to find out what effect pesticides are having to nutrient levels of produce. Polyphenolics are produced by a plant when stressed by insects, the higher levels of polyphenolics are said to have health benefits when consumed. They are linked to reduced heart disease and reduce the risk of cancer. We can see the claim that there is no difference in the nutrient quality of organically grown foods in comparison to conventionally grown foods is false. Organically grown foods benefit our health as well as our environment.

The method of farming organically promotes a balanced ecosystem and less toxic environment. Carson states, “Chemicals sprayed on croplands or forests or gardens lie long in soil, entering into living organisms, passing from one to another in a chain of poisoning and death” (Carson 692). Keeping our ecosystem healthy is just as imperative as keeping our bodies healthy. Food grown organically has the ability to conserve water and soil while reducing pollution. The effect that pollution has on our environment is generated from conventional farming. It is harmful to a variety of aspects in our enviornment, as carson states “ It kills vegetation, sicken cattle, and work unknown harm on those who drink from once pure wells” according to Carson (Carson 692). We are polluting our planet through the use of biocides used by conventional farming and in return we are contaminating our bodies.

Organically grown foods are less toxic and do not contain poisonous chemicals. According to the well regulated USDA organic program, the seal provided to USDA organic foods is given to products that are free of, "irradiation, sewage sludge, synthetic fertilizers, prohibited pesticides, and genetically modified organisms” (USDA). By choosing to farm organically we are providing safer food, which does not contain the same toxins as those grown from conventionally farmed methods. When we think of our children and our desire to protect them, we cannot imagine allowing them to ingest a bottle of chemicals. Why then would we choose to feed ourselves or them with products containing toxic pesticides, herbicides and fertilizers? America is recognizing the importance of consuming a healthy diet. We are declaring our choice through the products we choose. This can be seen in the recent surge in the organic market. According to Christie Wilcox, who wrote the article “Mythbusting 101: Organic Farming > Conventional Agriculture” In the past two years organic sales have jumped from $26.7 billion to $56 billion worldwide (Wilcox). We are recognizing the value to our health in purchasing organic and are willing to pay the extra cost.

A Comparison Between Conventional and Organic Farming Using Pesticides. (2021, Oct 31). Retrieved from http://envrexperts.com/free-essays/essay-about-comparison-between-conventional-and-organic-farming-using-pesticides 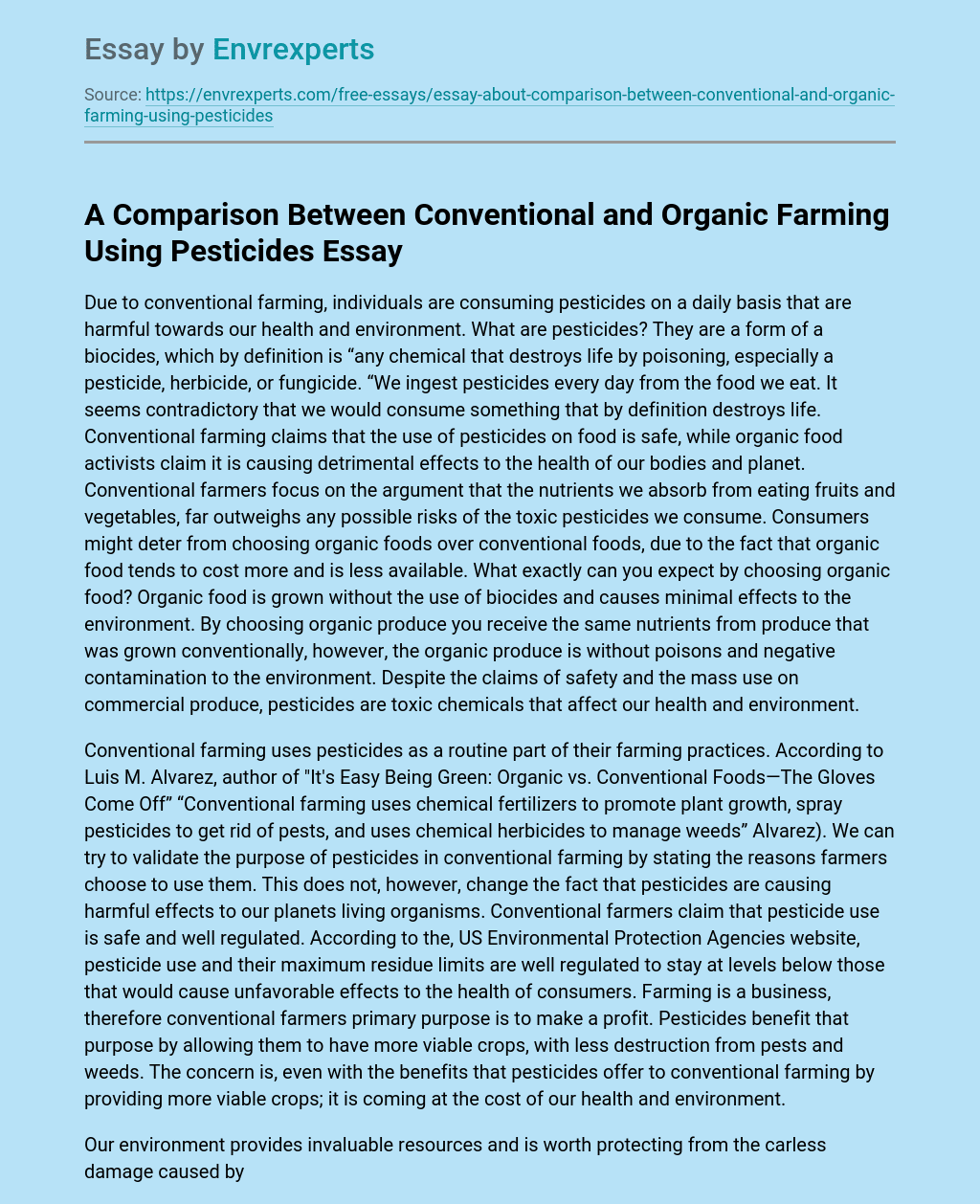