In the world today, there are many problems, most notably the depletion of the ozone layer and global warming. Perhaps one of the most significant problems of the world is also one of the least mentioned, population control. In the video, two sides present their opinions on population growth and overcrowding, the biologist, and the economist. Both sides give very good points, but based on the facts presented in the video, I am siding with the biologists point of view.

One of the most influential biologists was Paul Ehrlich.

Don’t waste time
Get a verified writer to help you with A Comparison of the Environmentalist and Economist Points of View on Ozone Layer Depletion and Global Warming
Hire writer
$35.80 for a 2-page paper

Ehrlich was the creator of Earth Day, which is a day where everyone cares about the environment. Ehrlich maintained throughout the video that population must be controlled, and that population, affluence, and technology must be tackled simultaneously before itis too late. He also mentioned that our environment would collapse if we don't solve population problems. For example, the ozone layer is so depleted, that it is impossible to live in some areas of the world.

Also, the clear-cutting of rain forests has allowed exotic diseases to come to North America. If the forests were not cut, those diseases would not have been able to escape. He also said that technology will not be able to solve everything and that we have to live within our limits. We cannot replace nature because it is too complex a structure. Another person who fought for the environment was Rachel Carson, whom many called the mother of the Environmental movement. She exposed the dangers of pesticide use to kill mosquitoes.

For these actions, the pesticide tried to discredit her, but as research has shown, pesticide is indeed harmful to the environment.

On the other side of the fence, is the economistis point of view. The economist believes that with technology, humans will be able to conquer everything and that there are no physical limits to our growth. While Ehrlich said that our resources are becoming scarcer, Jules Simon said that the world's resources, food and energy are more available every year due to the advancements of technology. Also, the economist believes that poor countries cannot limit their population, because the more people there are, the better the opportunity to build a better economy for the country, even if it means ruining the environment. The developing countries of the world argue that the developed countries have gone through this stage in the 401s and 50ls, and that is how they became so powerful and wealthy today. They too want to be able to get rid of the 13rd Worldi tag beside their countries name.

I think that in the long run, the environment is more important than the economy of a nation. What good would it be to us if we cannot breathe air without the help of a respirator just so we could have a few extra bucks in our pockets? Although it seems unfair, families will have to, and must learn to control the size of their families for the future of all human kind. To put it in Paul Ehrlichis words, if we don't solve the population problem, we won't solve anything.

A Comparison of the Environmentalist and Economist Points of View on Ozone Layer Depletion and Global Warming. (2021, Oct 31). Retrieved from http://envrexperts.com/free-essays/essay-about-comparison-environmentalist-and-economist-points-view-ozone-layer-depletion-and-global-warming 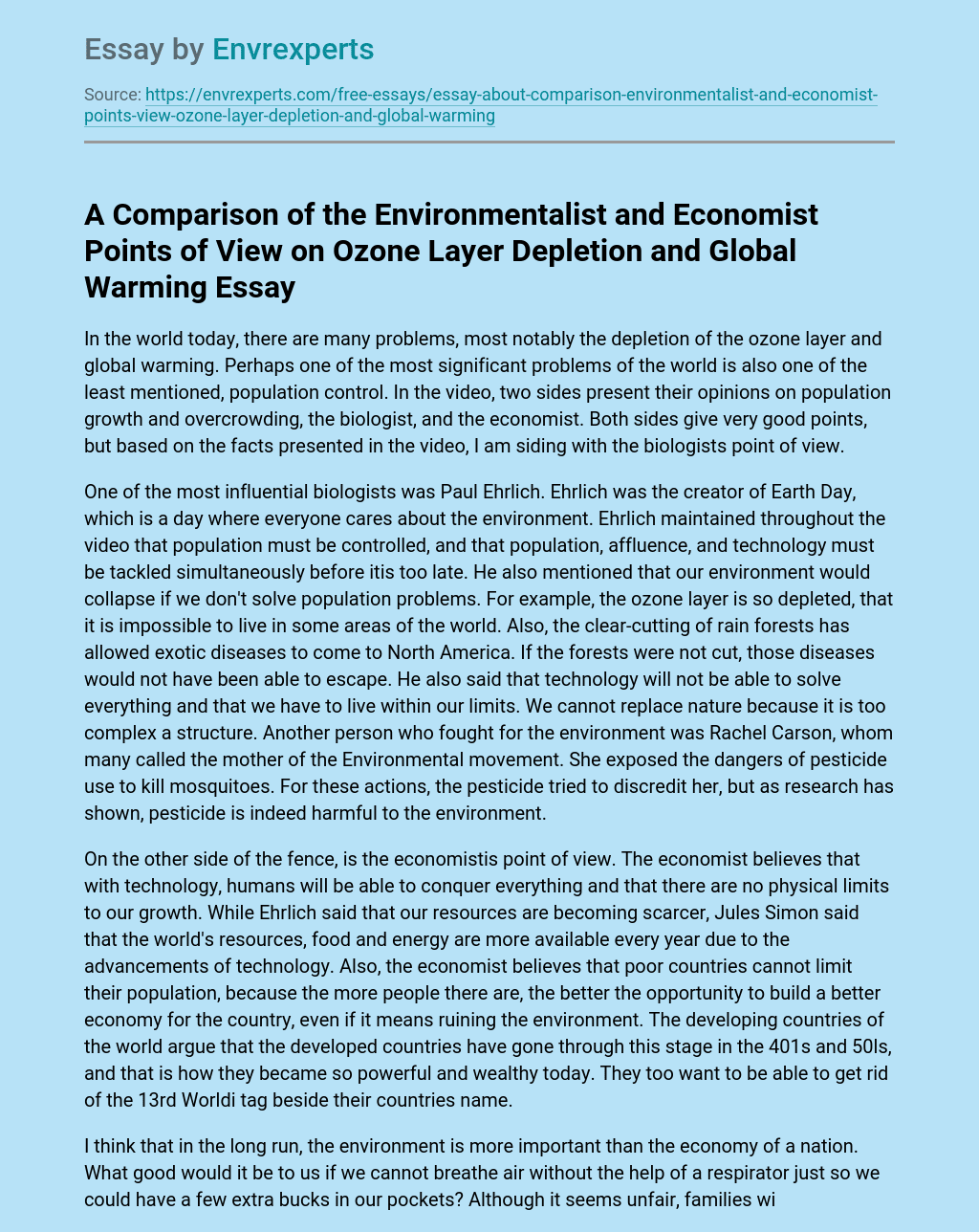