Alternative energy sources have been a major discussion in recent years, especially now that we are gathering more data which validates the theory of climate change. Solar, wind, nuclear, and geothermal energy sources are now increasing in popularity, but none of those options are available in the transportation industry as well as the current infrastructure. Many people are considering biofuels in order to retrofit their gasoline engines with cleaner more environmentally friendly fuels. They view biofuels as a better alternative than trying to purchase and maintain unpopular electric vehicles, or expensive hybrid electric vehicles.

Don’t waste time
Get a verified writer to help you with A Comparison of Plants and Biofuels as Alternative Sources of Renewable Energy Source
Hire writer
$35.80 for a 2-page paper

However biofuels are not as much of a clean cut solution as they are believed and expected to be. Evaluations of these “environmentally friendly” energy sources are necessary in order to determine the overall yield of each source. The evaluations must include considerations for the refining processes and production requirements to show an exhaustive whole of the cost and benefits of these energy sources but the cost of production and other tradeoffs make the benefits limited.

One biofuel that shows promise, but is not implementable at this time includes algae or cellulosic plants. The comparisons of these fuel types reveal that biofuels need more research to become comparable to the energy output of gasoline today.

The obstacles that biofuels have to overcome to be considered a competitor as an energy source include the same energy density that current fuel sources have while decreasing the overall cost, carbon emissions, and overall environmental impact, all while maintaining the world's current food supplies.

Ecological concerns regarding large scale cultivation of these plants is an important, if we want to decrease our carbon footprint. Some plants may be able to produce extremely efficient fuels, but if they require more water and cultivation then the plant may not be a net zero carbon fuel (i.e. they produce more carbon emissions than what they intake during photosynthesis). On top of all of those requirements, the fuel source should have the ability to quickly integrate into current infrastructure. A comparison of some likely sources of biofuels that might work can be found in table 1 in the appendix, but this chart only compares the overall efficiencies of these fuels. It is necessary to look at the entire process in order to find a good alternative to fossil fuels because efficiency in the choice of the fuel is only part of the answer.

The most common energy source used today is gasoline which contains a rough energy density of 32 MJ/liter. The leading biofuel alternative is ethanol which is produced from corn and contains only 18.4 MJ/liter of rough energy. Although both are naturally occurring, gasoline is not easily renewable, and produces nearly twice the amount of CO2 than the sustainable ethanol (3.3 kg/kg vs 1.91kg/kg). It's clear from looking at the numbers that ethanol is the not the answer to our problem. Ethanol simply produces too much CO, for the amount of energy it produces when burned.

Ethanol was a popular biofuel to begin with because in the U.S., corn is one of the most common food crops in production, making it easy to produce and easily incorporates into modern engines. This ethanol is commonly mixed with gasoline in a 90%-10% blend and currently has no effect on modern engines. Some gas stations are selling "E-85” (where ethanol makes up 85% and the remainder is gasoline). Use of E-85 is highly criticized because it's only effective under certain engine conditions (which most modern car engines are not able to obtain). The U.S. Energy Information Administration says that all gasoline vehicles can use E10. Currently only lighter vehicles (such as sedans) with a model year 2001 or greater can use E15. Only "flex-fuel" vehicles can use gasoline with an ethanol content greater than E15. [1] However, the controversy of ethanol comes from its use of corn as a beginning source. Many people have debated its use because of increasing corn prices for consumption, and the distilleries required energy to operate and its main energy source was coal. Overall ethanol has some potential in the U.S., but currently we don't have enough vehicles capable of using E85 in order to use ethanol as a standalone fuel source.

Diesel is another one of the more commonly used fuels in the transportation industry and contains roughly 33% more energy than the equivalent gasoline. This increase in energy makes a biological alternative more difficult to produce. Current biodiesels are manufactured from a number of different plant oils in both edible and non-edible formats. Commonly used edible oils come from rapeseed, soybeans, sunflowers, palm and palm kernels, and peanuts. These fuels are generally expensive to produce and the demand for these food crops for consumption lead to an overall low supply, driving the price up further. The increased price of edible oils cause many to look at non-edible oils such as Jatropha curcas, Pongamia, Neem, Mahua, and Jojoba. This would lessen the burden on the global food supply, but use up the same amount of farmland which doesn't decrease ecological impact. The conversation has now switched from what food sources can we use to what non-food sources of biofuel can we grow on land that is “useless” to current farm production, otherwise known as marginal lands.

The use of marginal lands which are defined as arid and generally inhospitable lands for biofuel cultivation is a smart idea, but issues about water consumption, plant/algae life processes, and energy required to cultivate require answered before we can begin using these lands. The main cost is irrigating these lands which is why low water consuming plants such as Jatropha curcas have been a big focus of study. If we can find a way of cultivating Jatropha and produce a biofuel from it in a net zero carbon way that will use very little water we will start to see a large scale movement towards the use of biofuels. The use of simulations such as EPIC [4] have generally been positive and small scale testing of these lands would be the next step.

Water consumption of biofuel crops is an important aspect that is generally forgotten about. Each crop has a different amount of water it needs to consume before we can harvest them for biofuel production (see figure 1). The use of water to produce crops used strictly for fuel production may drive the cost of these fuels up, potentially making them no longer competitive with fossil fuels. By decreasing the necessary water consumption for these plants through genetic engineering, or by using more efficient plants we can decrease the pollution that is due to run-off as well as increase the water that can be used for consumable plants.

Jatropha curcas is a plant species that has been a recent focus in biofuel technology. Abundant in tropical savanna, monsoon climates, and in temperate climates without a dry season and a hot summer, this species of shrub produces seeds that have a high concentration (27-40%) [2] of oil that can be converted into a biofuel. The plant is also under study due to its low nutrient requirements, resistance to disease and pests, and high output of premium oils. It is currently a wild-type plant, and would require years of domestication before substantial amounts of Jatropha oil based biofuels could be produced. Before we begin large scale agricultural projects with Jatropha, we need more information about the species genetic variability, ideal climate conditions, reproductive biology, as well as its effect on the surrounding environment. [2]

Other biofuel sources that currently are being explored, but cannot be incorporated into modern engines at this time include algae. Many scientists are looking towards algae as a producer of oils that could be processed into biodiesel. As of today, there is no current commercial scale production of biodiesel using algae. Many current studies claim algae is extremely efficient and could be the answer to our fuel issues but there are many issues that need to be resolved [6]. The high cost of the current algae systems has been the biggest issue with prospective investors. The cost of algae fuels are several times more than the current price of gasoline due to the large production cost [5]. Using the space efficiently is also an important issue. These "algae farms" require sunlight for the algae to begin photosynthesis so using the space given for these farms is a huge engineering question. Would the refining process of these algal biofuels require more energy and therefore no longer be a viable option? And lastly, where can these “farms” be located? Infrastructure requirements for the farm along with maximum use of sunlight are both things you need to take into consideration when building these farms.

Biofuels are not cut-and-dry technology. Many factors such as energy efficiency, net carbon emissions, water consumption, and ethical concerns all further blur our understanding of what's the smartest investment to take. The use of marginal lands seems like the smartest route to take because it is currently unused but approaching it correctly will help us create a sustainable, renewable fuel source that hopefully can substitute, and eventually replace, fossil fuels.

A Comparison of Plants and Biofuels as Alternative Sources of Renewable Energy Source. (2021, Oct 31). Retrieved from http://envrexperts.com/free-essays/essay-about-comparison-plants-and-biofuels-alternative-sources-renewable-energy-source 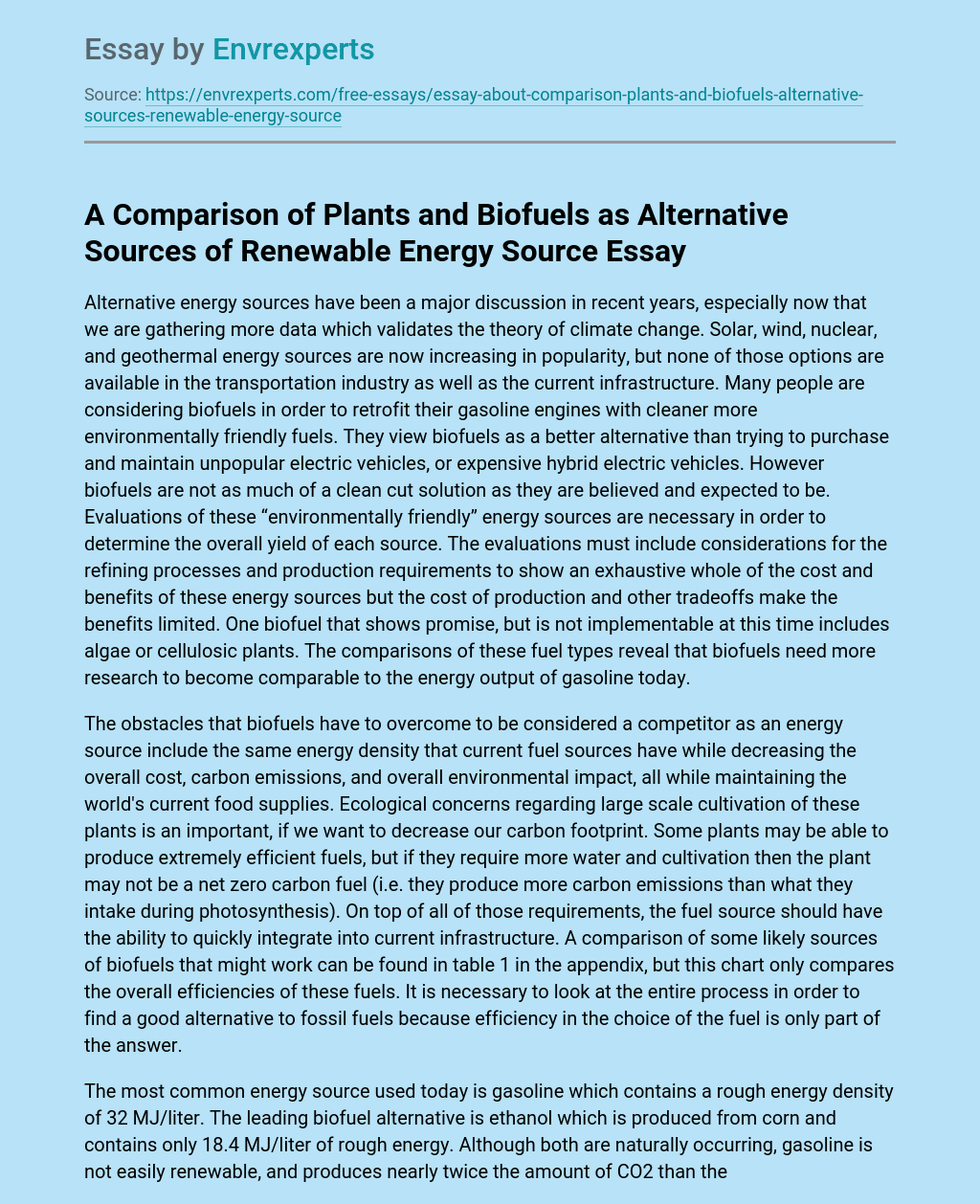