A Comparison of "The Web of Life" and "Eden Changes"

The short excerpt from “The Web of Life" is written by Fritjof Capra. Capra is an American born physicist and he is a founding director of the Center for Ecoliteracy in Berkeley, California so his work can be considered credible in my opinion. He writes from the perspective of a struggling economically based world. His solution is to create a world that is not economically run but ecologically run. It is explained over and over again throughout the passage that earth was originally created as an ecologically stable being.

Don’t waste time
Get a verified writer to help you with A Comparison of “The Web of Life” and “Eden Changes”
Hire writer
$35.80 for a 2-page paper

He explains how a world of ecologic stability is an efficient one because all beings work together in an interconnected web that supports one another and everything runs in a cycle rather than having waste. Capra's main theme in this passage is change. He even plans it out briefly. He says that the best way of accomplishing stability is changing economical taxes to eco taxes. “Economics emphasizes competition, expansion, and domination; ecology emphasizes cooperation, conservation, and partnership.

Another message in this passage by Capra is that divided we fall, but united we stand. Capra very much uses the logic appear to gain the reader's attention. He explains many positive cause and effects which are pretty effective.

“Eden Changes" is written by Archie Carr. Carr was an American herpetologist, ecologist, and conservationist who also worked at the University of Florida so his work is trustworthy. This passage is similar to the first one in that it talks about the destruction of the environment because of human beings.

However, Carr has a bit of a different style of writing than Capra. There are a few things that I found different. One, Carr writes in more optimistically. For example, he explains how the manatees (although still low in numbers) have started to make a comeback. Similarly, he talks about the otter, and alligator and their comebacks as well. The second difference is that Carr adds a personal story to this passage about his crazy friends with dynamite and fossil searching. This adds emotional appeal to the story because you like to hear about John Henry and goo talking in their horrible accents. It's actually pretty comical and I believe it was just the right length and kept the passage interesting. Toward the end of the passage, Car began to sound a little more like Capra in that he was explaining the errors in a human way in a more logical appeal which gives the reader the same conclusions as the first story did, being that humans need to consider their ways of living and we need to change to an ecological state of mind rather than an economical state of mind. That being said, I still think that the themes of each story are slightly different. Capra instills a sense of failure and the need for change. He just goes on and on about how many things humans have done wrong in the past and how things need to turn around. Then suddenly he gives us a few rash solutions and that is it. Carr has a more hopeful theme in his paper. He gives examples of small successes in and he also narrows it down to the state of Florida which I believe brings the story back down to earth, making it easier to understand.

Overall, “Eden Changes" was more convincing as well as more true to me as I could grasp it more easily because the author brought it down to earth, rather than just making accusations about the whole human race in general. Lastly, I will mention how these two passages are different than the other stories we have read so far. In all the other stories, the animal's feelings have been the main focus. Like in escudilla, we focused on the bear, or when Aldo Leopold speaks about his experience with wolves. In this passage, the main focus was on humans and it being their fault for the destruction of the environment and that only we can reverse the destruction. However, when it comes down to it, all the stories we have read this far have been about the environment and how it is struggling so they honestly are all similar in nature.

A Comparison of "The Web of Life" and "Eden Changes". (2021, Oct 31). Retrieved from http://envrexperts.com/free-essays/essay-about-comparison-web-life-and-eden-changes 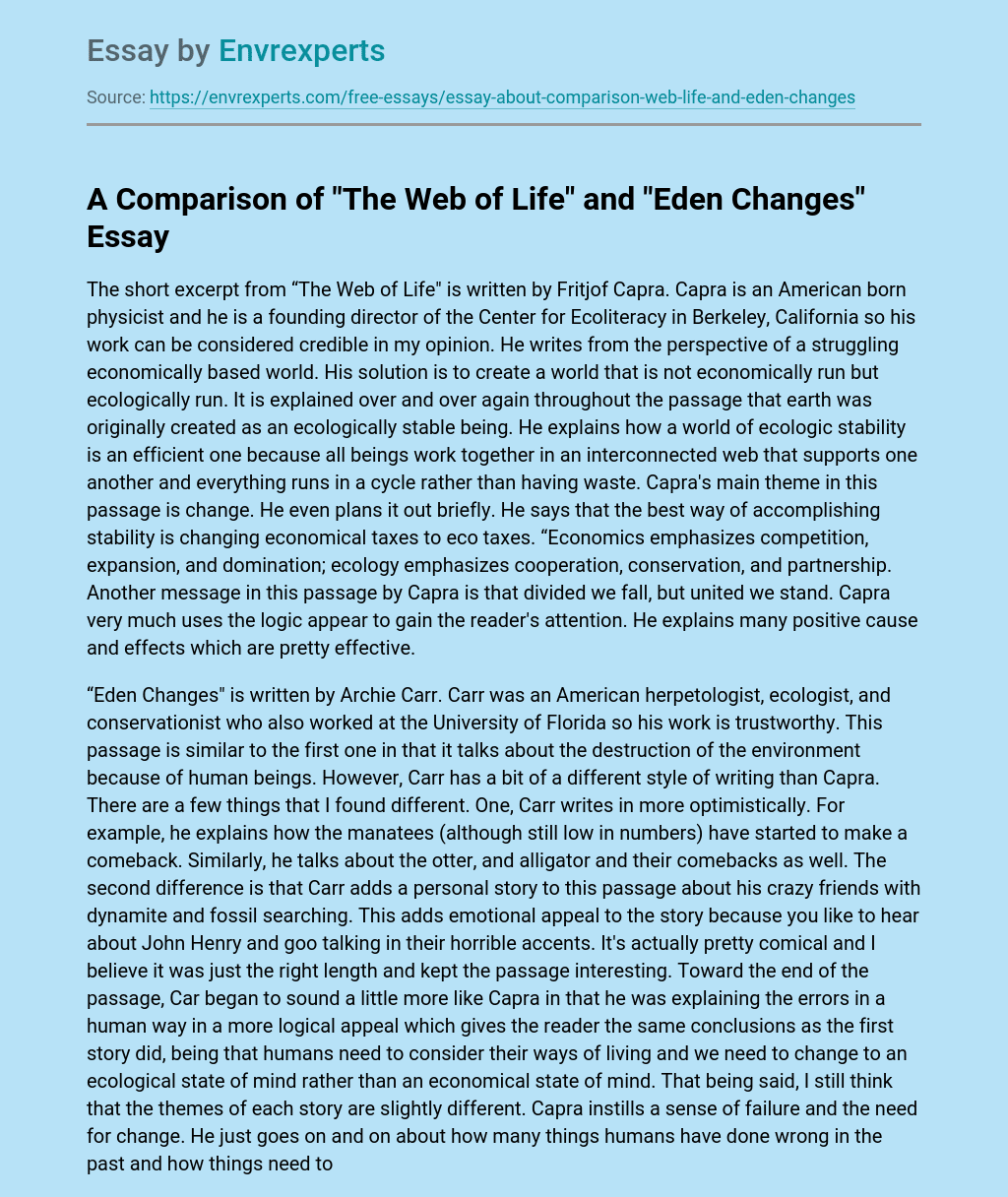