A Comprehensive Analysis of the Future of Life, a Book by Edward O. Wilson

Edward O. Wilson is a Biologist and considered the world's leading authority on ants.

However, in his book The Future of Life, we see that he is one of the world leading conservationists and a naturalist. This book is meant as a warning to the humans to stop destroying our world. If we don't clean up our act then a very bleak future might await us. Although Wilson doesn't go into the gruesome details of this future he explains that we are the problem.

Don’t waste time
Get a verified writer to help you with A Comprehensive Analysis of the Future of Life, a Book by Edward O. Wilson
Hire writer
$35.80 for a 2-page paper

He goes to great lengths to show how we are destroying the balance on our delicate planet. His main argument is that we should care about protecting the Biosphere because it's where we live and the only place that we know of that is capable of being our home.

Life is a gift and we need to protect it. It is a miracle that every inch of this planet is full of life from the sea ice in Antarctica to the plush rainforests in the Amazon from the Ocean trenches to the mountaintops.

Life has inhabited every single niche in our world in a perfectly balanced and self-regulating system that we still don't fully understand. In fact, this system is so complex that we can barely grasp the complexities that they exhibit. In fact only about 1.5 million species have been documented and given a scientific name while the true number of living species is somewhere in the range of 3.6 to 10 million. Sadly these species may become extinct before they are ever discovered.

Over 50% of the planets biodiversity stems from our tropical rainforests, which are continually threatened by deforestation for the expansion of agriculture. Our continued degradation of the tropical forests and the biosphere in general may result in the extinction of half of the planets species by the end of the century.

Wilson talks of the bottleneck that we face with our growing global population. A population bottleneck occurs when an environmental catastrophe causes a sharp reduction in the population of a species. An event on the global scale reducing a species population can limit the variation in the gene pool and can result in a slow recovery of the species or its extinction. He recognizes that we can't continue on our current path and expect to keep the same living standard we have here in the U.S. for generations to come. In fact in order for the current world population to reach the levels of U.S. consumption we would need four additional planet Earths. The fact remains that the amount of humans that our planet can feasibly support is limited and we may have already passed the upper bounds of that limit. The main threat to biodiversity is the growing human population. The human population has continued to grow from around six billion when this book was published to over seven billion today. That is a billion more mouths to feed than when this book was written and a billion more than the earth can adequately support.

When we choose to destroy and degrade these complex ecosystems and energy pathways we are destroying the only home we have and threaten our continued existence. Wilson argues that what we need is a new land ethic (one called for by Aldo Leopold in his Sand County Almanac) to help preserve what is left of Earth's biodiversity. There needs to be some cooperation between environmentalist and economists to find some middle ground in this global issue that affects everyone and everything we know. We measure market value of goods and services in terms of Gross National Product (GNP). Even an economist cannot argue the amount of value that the biosphere provides free of charge. Wilson says that the value of the services provided by the Biosphere is $33 trillion annually or nearly twice the entire global GNP of $18 Trillion in 1997. Wilson discusses the importance of protecting the biological systems, energy pathways, and the millions of different organisms that have uniquely evolved around the globe. There is no way to estimate the value of these biological phenomena, intrinsic or environmental, because we still don't understand how the biosphere works. As long as biologists are still doing research, we will never have all the answers.

The disappearance of our natural resources, depletion of ecosystems, and the extinction of species are not just political and economic problems. Morally we all have a responsibility to do what we know is right. Environmentalism needs to become a worldview not just a special interest lobby in the political world. It is hard for each individual person to make the connection between their own actions and the destruction of the environment because we never see the impact that our choices make. This book brings to like almost a completely different issue than what climate scientists are focusing on in their research today. Carbon emissions get a lot of press for being the root cause of global warming, but the climate isn't changing solely as a result of the greenhouse effect. Deforestation on a global scale can change weather patterns and distribution of rainfall. Lest we not forget that forests play a key role in the carbon cycle where they photosynthesize, a process that takes carbon dioxide out of the atmosphere. Planting more trees and saving the trees that we have is more important than simply lowering emissions.

A Comprehensive Analysis of the Future of Life, a Book by Edward O. Wilson. (2021, Oct 31). Retrieved from http://envrexperts.com/free-essays/essay-about-comprehensive-analysis-future-life-book-edward-o-wilson 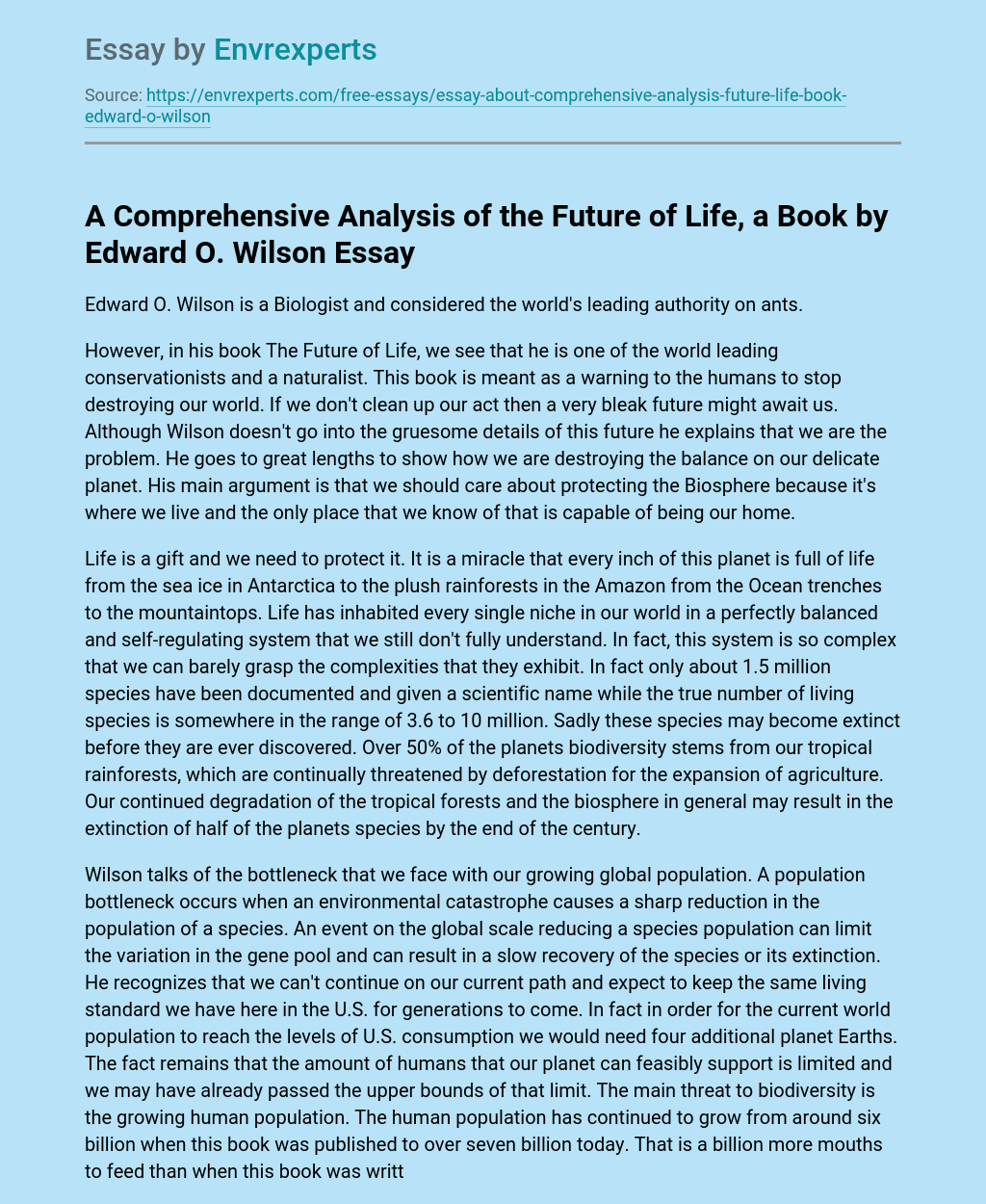