The concept and characteristics of sharing economy

After the worldwide economic crisis of 2008/2009, new business models have emerged, and a new type of economic interaction arose: The Sharing Economy.
Initially, the purpose of this system was to increase social interactions and promote more responsible and environmentally friendly consumption, by improving the use of goods.
No company was involved; thus, both the provider and the consumer were individuals who simply wanted to share the non-used remaining goods.
Even though it still does not exist a universally accepted definition of sharing economy, this rather new phenomenon, as we know it nowadays, can be defined as follows:
“It is an alternative social and economic movement that shares resources with others to reduce waste and contributes to the increase of common interests in society”.

Don’t waste time
Get a verified writer to help you with The concept and characteristics of sharing economy
Hire writer
$35.80 for a 2-page paper

More precise is the definition given by the Oxford Dictionaries:
“The Sharing Economy is an economic system in which assets or services are shared between private individuals, either for free or for a fee, typically by means of the internet”
There are many synonyms to the widely known term "sharing economy".

The more familiar are collaborative consumption, access-based consumption, access economy, peer-to-peer economy and on-demand economy.\nIn particular, collaborative consumption (CC) is defined as:
"[…] a peer-to-peer-based activity of obtaining, giving, or sharing the access to goods and services, coordinated through community-based online services".
Or
"An economic model based on sharing, swapping, trading, or renting products and services, enabling access over ownership. It is reinventing not just what we consume, but how we consume.

"
First, it is necessary to define the notion of Peer-to-Peer activities (abbreviated as P2P) which are "person-to-person marketplaces that facilitate the sharing and direct trade of assets built on peer trust".
It is also known as C2C, the abbreviation for Consumer to Consumer.
This concept is different from B2C, which is “an abbreviation for business-to-consumer: describing or involving the sale of goods or services directly to consumers for their own use, rather than to middleman businesses”.
Consequently, it can be said that the sharing economy can operate in both B2C (or B2P) and P2P (or C2C) contexts.
Indeed, the sharing economy networks can be distinguished into P2P and B2P platforms.
Moreover, two main categories of exchange may be separated: access over ownership and transfer of ownership.
The former is the most common mode of exchange, in which users share goods and services through P2P sharing activities, usually for a limited period of time and upon payment of a fee (e.g. Airbnb).
Alternatively, the latter “passes ownership from one user to another through swapping, donating or purchasing of primarily second-hand goods”. (e.g. ThredUp Thrift Store)
Thus, it is important to explain that the sharing economy system is characterized by several unique features:

To this extent, three categories of participants are involved:

Anyway, this system of “resource sharing” is present historically in the human nature considering that likewise, in the past, individuals in small communities could sell or trade excess goods to other people.
Therefore, it is nothing radically new, but the interesting and innovative aspect is the use of ICTs.\nICTs
The socio-economic phenomenon of sharing economy is at present growing much faster than other sectors, especially as a result of the employment of technologies in work fields, and even more after the economic crisis that left people with insufficient revenues.
In this new societal system of collaboration, the use of information and communication technologies (known as ICTs) is fundamental; thus, it can be considered as a true Technological Phenomenon.
Sharing Economy development is necessarily linked to digital technologies, since it uses exclusively internet-based platforms, both websites and mobile app.
In this way, ICTs are important however, it can be said that
“Firms that own and operate such online platforms do not control the actual sharing at all”.
Otherwise, social dynamics are crucial for the actual leading of sharing and collaboration.
It can be defined as “Social Commerce” a form of products and services exchange enabled by social media, which support social interactions and user contributions, both online and offline.
The rapid progress in ICTs has empowered the spreading of collaborative web communities and social commerce; consequently, in the next few years, sharing economy business networks are predicted to dominate the market in some key sectors.
Examples of well-known collaborative online communities are Wikipedia (free collaborative encyclopaedia), content sharing sites as YouTube and Instagram, peer-to-peer file sharing websites as The Pirate Bay, P2P financing and crowdfunding services as Kickstarter, house-sharing app as Airbnb, and car-sharing platforms as Blablacar and Uber.
Contrary to traditional networks, modern technologies employed into CC business platforms assure very high dynamics and flexibility and enable instant adjustment to the changing consumer’s needs.
In particular, since these facilitating platforms aren’t conceived to be the actual providers of goods and services, they promote transactions by sharing services through a two-sided market, in which users and providers meet and interact to exchange amenities and goods.
Moreover, internet-based platforms include a review and rating system, essential to provide both parties with a credible and proven level of trust; the result is an entrusted and valuable platform and, as the economist Rysman explains:
“[…] the value of the platform increases with the size of the network.
That is, the value of the platform to the service user depends on the service provider, and the value of the platform to the service provider is influenced by the service user.”

The Sharing Economy and Airbnb

Airbnb, a representative case of a sharing economy, has three key elements as follows; (i) Airbnb offers space resources through an online platform. This digital intermediary reduces the cost of connecting potential producers and consumers; (ii) It is a peer to peer service. It means that Airbnb clients and service providers are interchangeable, and more generally, Airbnb hosts can also be clients when traveling; (iii) Airbnb is access-based. This service provides users access to specific resources or services over a period of time.
Customers and providers of Airbnb perceive Airbnb as cheaper and distinctive than traditional accommodation options because of the popularity of the sharing economy system. Customers and providers of Airbnb prefer mutual cooperation and contribute to each other through knowledge, money and service. Sharing economy is expected to continue to grow for the foreseeable future, and Barnes and Mattsson predicted that sustainability and environmental concerns will be important issues for sharing economy over the next decade.

The sharing economy will not replace business as usual we consider that it will be an important complement to it. New platforms, new methods of payment and certain clarifications regarding safety rules, insurance aspects or taxation will definitely help the sharing economy to overpass the inherent difficulties of the beginning and to consolidate.
the sharing economy – in their case the sharing of accommodation – is a part of the grey economy and has segments of illegality (e.g. tax avoidance)
a way of providing better, easier and cheaper solutions.

The concept and characteristics of sharing economy. (2021, Oct 31). Retrieved from http://envrexperts.com/free-essays/essay-about-concept-and-characteristics-sharing-economy 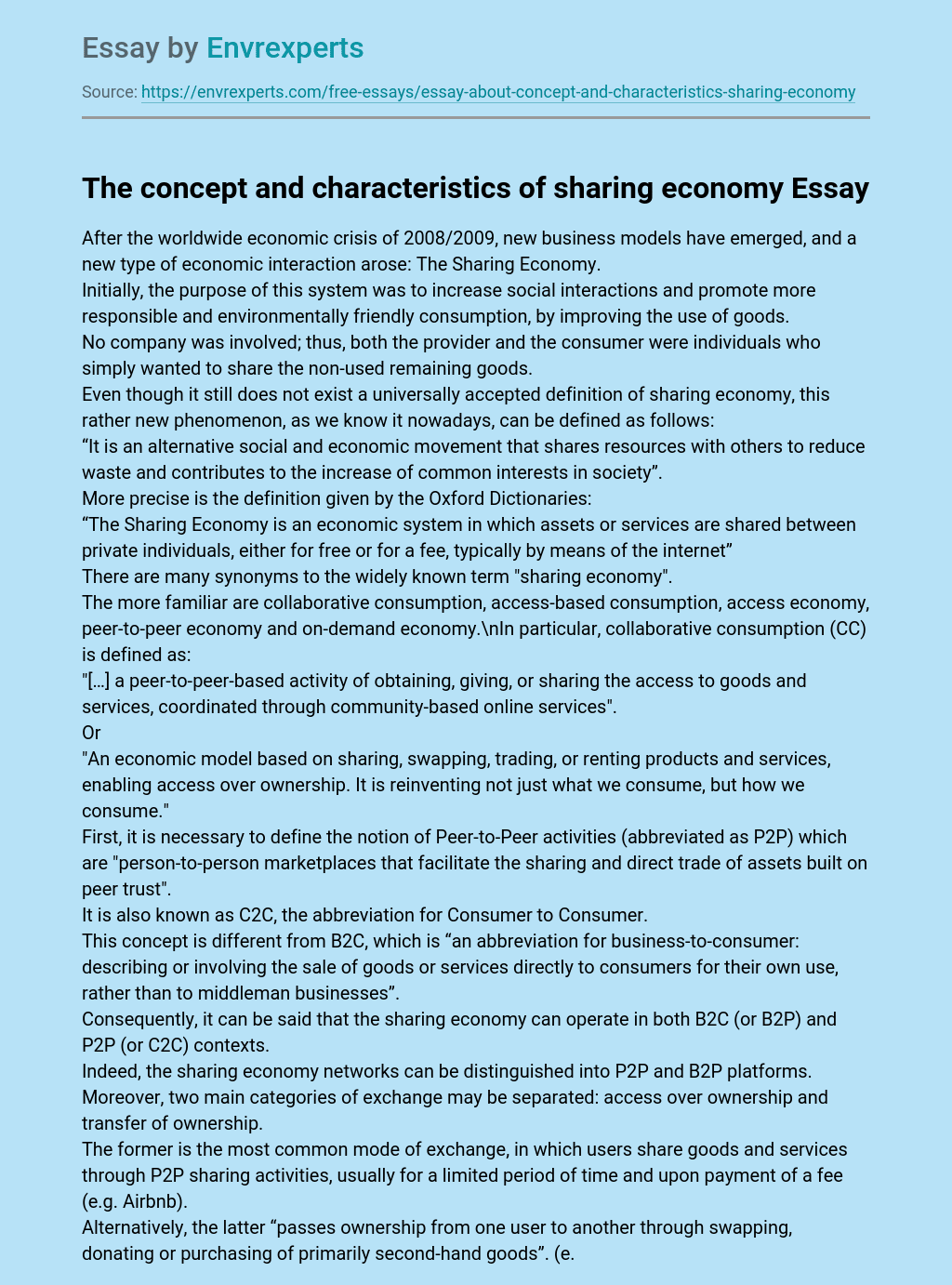