A Concept of Evolutionary Biology

The article written by Dr. Ulrich Kutschera discusses the history of the \"species concept\" as originally proposed and written by Charles Darwin in his most influential book, On the Origin of Species and how his concepts evolved into the branch of science known today as \"evolutionary biology\" (Kutschera 2009, p. 1248).

It briefly explained the contents of Darwin\'s original work in five concise points that mostly refer to having gradual modifications within species. The article also discussed the scientists that both contributed and argued the rationale of Darwin's concepts of natural selection and what it produces such as his overshadowed partner, Alfred Russell Wallace.

Don’t waste time
Get a verified writer to help you with A Concept of Evolutionary Biology
Hire writer
$35.80 for a 2-page paper

While Darwinism has dwindled over time, other scientists such as August Weismann, Ivan Schmalhausen, Theodosius Dobzhansky, and many others developed Darwin\'s theory by adding points that were not discussed due the topics being undiscovered during Darwin\'s time such as the emergence of certain bacteria and the dynamic Earth (Kutschera 2009, p. 1258).

The article ends with concluding how far evolutionary biology has come and restating Dobzhansky in how it now applies to all the biological sciences including physiology and biochemistry.

It also concludes that our \"modern views\" differ greatly from Darwin\'s \"young, static, bacteria-free Earth concept\" (Kutschera 2009, p. 1261). While many discoveries were made during both the Darwinian and Post-Darwinian eras, the biosphere remains larger than these scientists have explored that all began with ancient bacteria formed approximately 1 billion years after the Earth formed 4.56 bya (billion years ago).Among the different disciplines in the social sciences, the topics of the article are mostly within the area of history and economics.

The majority of the article mainly explains the history of evolutionary thought beginning with Charles Darwin\'s \"5-year-voyage of the H.M.S. Beagle\" (Kutschera 2009, p. 1247).

The evolutionary biology\'s history is indeed thorough enough to be considered a source of historical research for not only Charles Darwin but for the other scientists to have contributed to the species concept. The main influence for Darwin and Wallace\'s ideas of natural selection came from Thomas R. Malthus, a British economist who wrote on the \"principles of population growth in humans\" (Kutschera 2009, p. 1250). However, the article is undoubtedly more suited for the natural sciences as the main topic concerns the development of evolutionary biology and the branches of other natural sciences that connect with it such as, according to Dobzhansky in the article, \"Genetics, systematics, comparative morphology and embryology, paleontology, and ecology\" (Kutschera 2009, p. 1257).

I think the article is informative not only on how evolution functions in the environment but also demonstrating evolution by detailing how the concept was conceived and subsequently evolved throughout the 19th and 20th centuries. The article serves as a textbook example of how the history of evolutionary biology should be written by taking into account the different sides of the topic and being precise in detailing the origin of each theory. Admittedly, the details were somehow verbose in certain paragraphs but the explanations for the species theories were surprisingly concise for near-novice readers that could serve as a regular school text.The author intended the article to inform the readers of the importance of evolutionary biology in the historical context but he somehow fails in the organization of one of the terms; revealing the term \"evolutionary biology\" to be \"coined by Huxley in 1942\" after the term was used for the majority of the article already and after Huxley was only cited two times without expounding how he came to come up with the term (Kutschera 2009, p. 1257 & 1260). The author also needs to keep consistent with the usage of the abbreviation mya (million years ago). The abbreviation was used multiple times within the article before being defined in page 1259.

The rest of the article is in a clear chronological order based on the development and observations made before, during, and after the twentieth century regarding the biological theories. The author displayed fine detail in describing the different arguments of Darwinism by including his own experience with a physicist at his lecture. By agreeing partly that natural selection only \"preserves the average individuals\", he teaches the difference between the stabilizing and directional natural selection that Darwin and Wallace have failed to contrast due to only exploring the latter kind of natural selection (Kutschera 2009, p. 1255).

A Concept of Evolutionary Biology. (2021, Oct 31). Retrieved from http://envrexperts.com/free-essays/essay-about-concept-evolutionary-biology 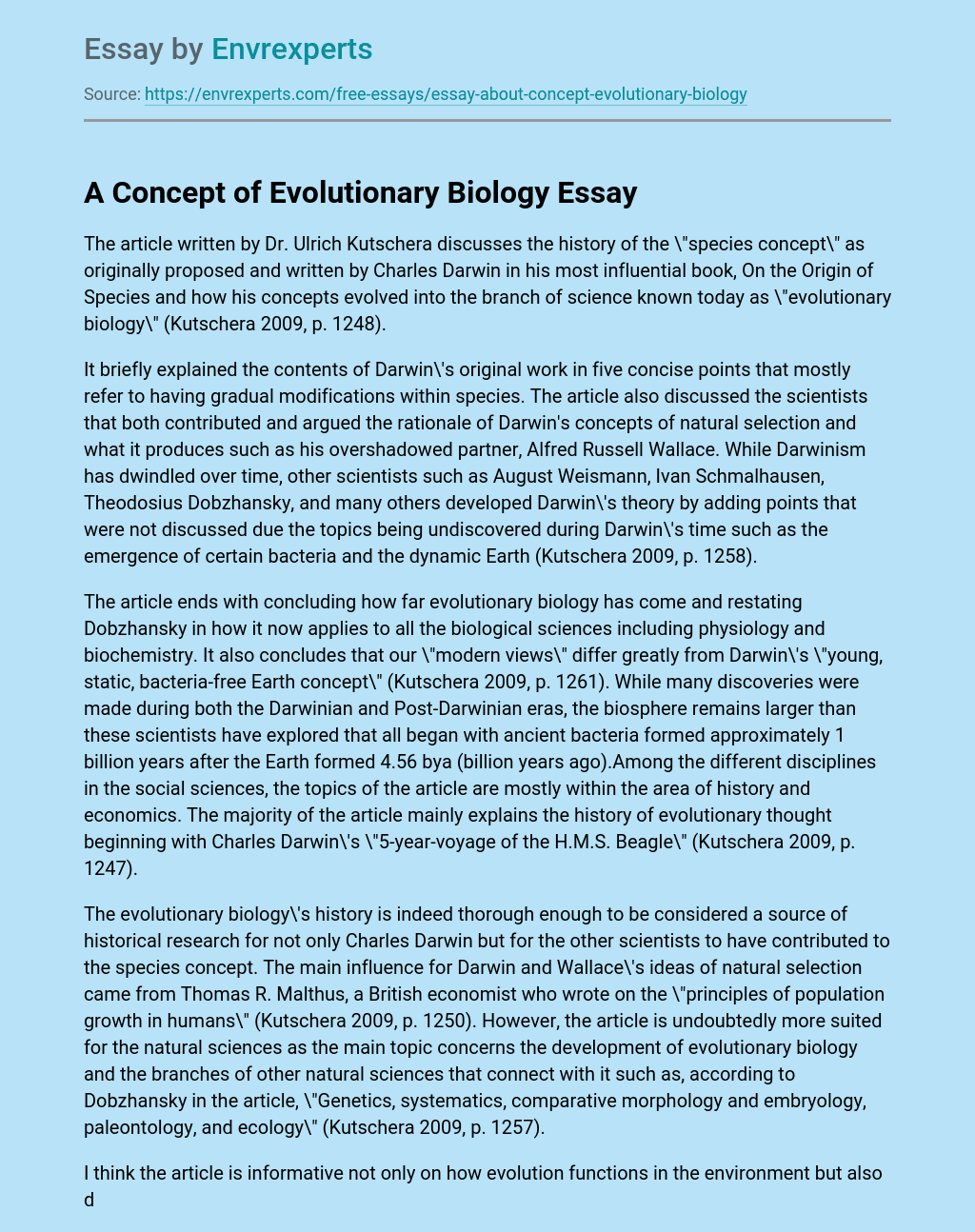