Recycling is taught at a very young age but as we grow older, it is not engraved into our society of how important it is to recycle.

Don’t waste time
Get a verified writer to help you with The Concept of Recycling in the United States and the Environmental Problems in the Future
Hire writer
$35.80 for a 2-page paper

This topic of recycling was selected because we as a society living in the United States, do not recycle enough even though we create the most landfills. Also, we are worried about keeping our environment healthy but our actions prove other otherwise.

According to a research done by students at the University of Utah, Americans embody five percent of the earth's population and they produce about thirty percent of the world's garbage.

Americans waste about 1 million pounds of materials per person every year, which produces about 3.3 trillion pounds of CO2 gas that is released into the atmosphere every year. An average American produces about 4.4 pounds of waste per day. This tremendous amount of weight exceeds more than any other county in the world. The United States in one of the country that produces the most waste and also one of the country that does not recycle as much in order to balance out the ratio of waste to recyclable.

Americans recycles less than half of the amount of waste they create according to the Environment Protection Agency. Recycling is not a social norm in the United States because it is not promoted as often as other countries. Also, recycling policies are not enforced on the citizens as much as they should be and how we were raised and where we grew up also plays a factor on why we as American don't recycle as much as other countries. Education is another factor on why we don't recycle enough because the integrating of recycling in education is not mandatory or endorse into many of our school systems or lesson plans. Recycling is not promoted as often as it should be. We all hear and read of why we should recycle and what are the benefits for recycling, but most of us still end up not recycling. There are not many advertisements out there in the United States that promotes recycling because many people think that it is a common thing that we as a society should do but it is not true at all. There are hardly any advertisements on television that endorse recycling. Even though, we know that it is against the law to not recycle, we still end up doing it any way because many of the recycling laws are not “force” onto us.

For example, around the Juniata neighborhood in Philadelphia, if you don't recycle you could end up with a fine of about thirty five through fifty dollars, but many people around that neighborhood still don't recycle at all. This is due to the fact that the law is not really enforced upon us. While in Japan, recycling is seen as a huge part of their society. There are laws and regulations for recycling and if you disobey these laws you could end up with a huge fine or even find yourself with some jail time. It is required by law that all Japanese citizens must recycle. Also, recycling in japan is very well promoted, through the media.
Another reason why recycling is not part of an average American's life is due to the fact that we are lazy and we know that if we don't recycle, there will be other people that will recycle for us. In the United States, we have a lot of recycling collectors that goes around the city and collect the recyclables for us. All we have to do is put all of our recyclables in front of our house and then the recycling trucks would come and pick it up. In the United States, we just throw all of our recyclables into one recycling bin. This is different for different countries. For example, in Japan, you're not allow to throw everything into one recycling bin. There are separate bins for each different items, such as, glass, paper and plastics.

Also, in Japan, you have to recycle by yourself, no one would do it for you, while in the United States of America, there are people who works at recycling companies, and their jobs are to pick out the recycled items and separate them. Recycling in Japan, is a social norm because there are laws that force you to do it and also, it is part of their culture to be eco-friendly. Since the United States is considered a "melting pot" of the world, with all different cultures, it is hard for everyone to be on the same page.

Also, recycling is not part of the average American’s life because it is not part of our culture and we don't see it as an important subject like other countries. Education is a significant factor of why recycling is not a social norm in the United States of America. In our country, we are taught about recycling at a young age but as we get older, it is not taught to us again. People just expects us to know what recycling is but really we only know the idea of it. During our education, we learned about the basic things that comes up when someone says recycling. For example, we are only taught that if we don't recycle, it may harm the earth and the basic items of what we can recycle such as; water bottles, glass and paper. There is a lack of recycling education in America and also, recycling is not promoted a lot among students. This is different from Japan educational system, which promotes and carry out the idea of recycling.

Japanese students are taught at a young on how to recycle and why it is important to recycle. Recycling is not only taught in schools but it is also carried out into the school environment. For example, after eating lunch, Japanese students are required to take out the trash, clean their messes and even recycle. They have to separate the recyclable and non recyclable. For us in America, we just throw our trays or plates away after finish a school lunch. As of today, the American educational system is still trying to integrate recycling into Kindergarten through high school educations. We usually learn about recycling in our science or social studies class rooms and not anywhere else. There are also non-profit groups like the Center for a New American Dream or the Be Smart that are created in order to provide students with better knowledge about recycling. Even though we have these program, we as a society still have trouble recycling.

Accessibility also plays a huge factor on why we don't recycle as much. For example, the recycle bins on Temple University main campus are placed randomly throughout the campus. There is not a central place where we as students could go to in order to drop off our recyclables. Also, the recycle bins are not very descripted on what we could recycle and could not recycle. The recycle bins at Temple University also have very small opening which limits some of the recyclables that students may have. With limited access to recycling centers or even recycle bins, people will tend to not recycle as much. Conclusion Recycling in the United States of American is not a social norm due to the fact that there are no laws that are actually enforce onto people that doesn't recycle. Also, there is a lack of educational resources and programs that promotes the importance of recycling.

Accessibilities to recycling centers and recycle bins can play a huge part of why we don't recycle as much as other countries. This topic relates to people, place and environment because depending on where you're from, it can affect your perspective on how you look at recycling. Some cultures see recycling as a huge part of their communities and some don't due to where they live and how their country is structured. Since the United States is way bigger than Japan, it can afford to have landfills while Japan can’t due to small land size. Many of the young American adults don't recycle due to the fact that they were never taught how to. This causes a problem for future generation because now a day young American kids are adapting to an environment that does not promote recycling.

The Concept of Recycling in the United States and the Environmental Problems in the Future. (2021, Oct 31). Retrieved from http://envrexperts.com/free-essays/essay-about-concept-recycling-united-states-and-environmental-problems-future 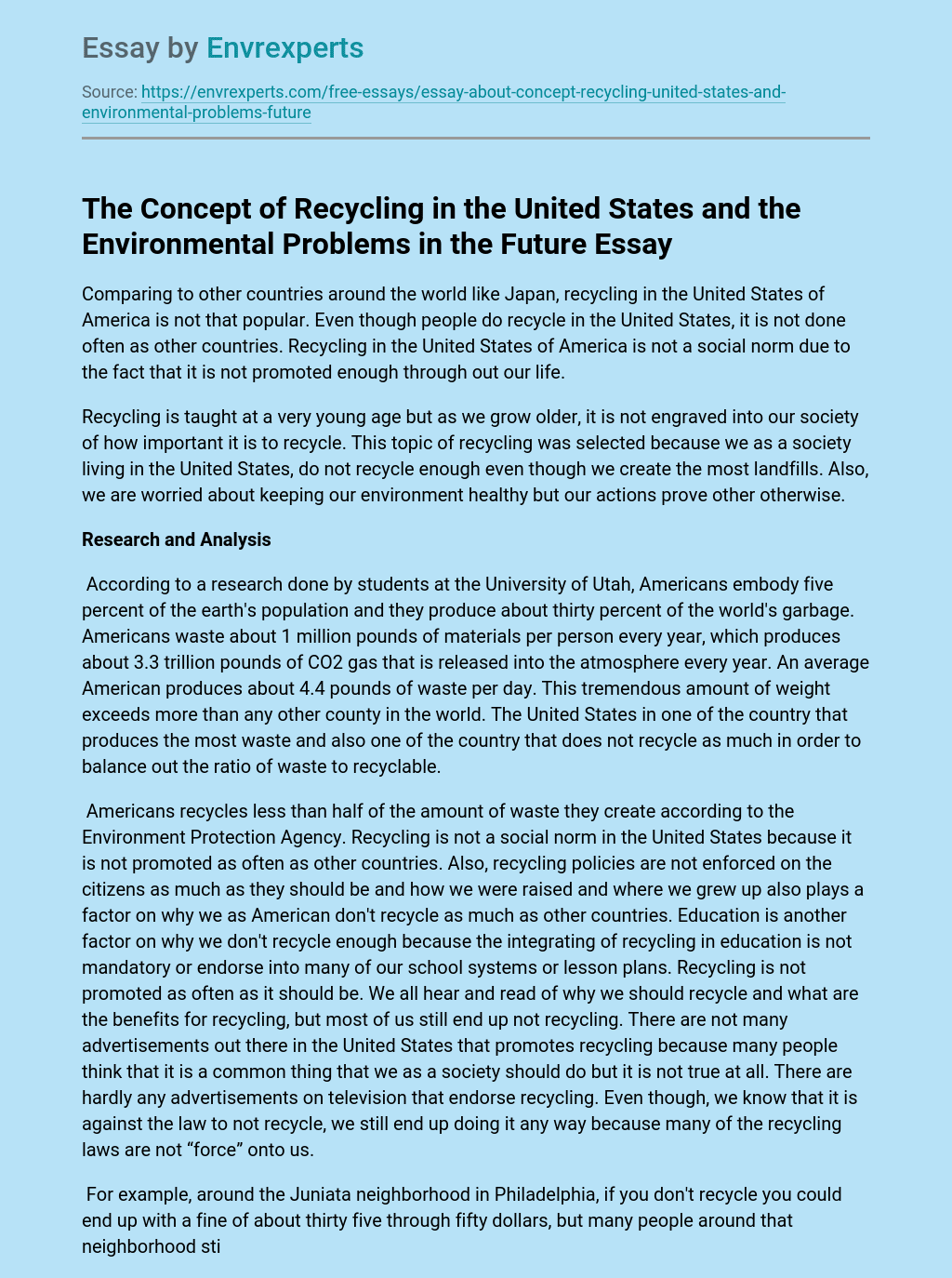