The Conservation Law of New Hampshire

New Hampshire's foremost attraction to European settlers has been the abundance of fish in the Isles of Shoals as well as an expansive coast of deep waters plentiful with fish. The wildlife doesn't stop there either. New Hampshire also has the White Mountains. These mountains are surrounded by miles of forests filled with a huge variety of wildlife. According to the state fish and game website (NH Fish), back in the settling days of the state, settlers were drawn inland by the surplus of beaver and huge white pines.

Don’t waste time
Get a verified writer to help you with The Conservation Law of New Hampshire
Hire writer
$35.80 for a 2-page paper

This is why European settlers found New Hampshire inland areas to be favorable. Beavers were a profitable resource and the trees were very convenient to build with and therefore another profitable resource. However these resources needed some form of law to moderate the amount of the trees or animals taken in an effort to conduct sustainability.

At first there wasn't any real form of law enforcement in the state.

The first form of conservation was in the form of encouraging hunting predatory animals by actually paying people to harvest the animals (NH Fish). In New Hampshire the animal at which they were most concerned was the wolf as it threatened livestock. This bounty system started in 1657 at a Dover town Meeting stating that each wolf is to be worth 4 pounds. Ten years later after the decrease of wolves the Indians were discriminated where they only received 30 shillings as they were considered “savages” and stealing all the wildlife.

Indian discrimination was common in the time period throughout the young colonies. A few years later in 79' the Indian only got 10 shillings per wolf while settlers received 40. This amount changed again and again. It also began to include other animals such as bear, foxes, crows, wildcats, panthers, hawks, grasshoppers, porcupines, woodchucks, and woodpeckers. These bounties were as recent as 1955(NH Fish).

Even though the predatory animals were worth money, it became evident very early in the settling days that the deer heard was going to be in need of protection. In 1740 it was prohibited to hunt dear between the end of December and the beginning of August (12/31-8/1). Each town was to appoint two “Deer Reeves” that inspected people's houses for new killed dear that were out of season. However during this time period many other animals such as birds and bears were not as attended to. These “laws” never really had a backbone at first. They were there but if one were to break them nothing would most likely happen to them even if they were caught other than a small fine. Getting caught was rare so poaching was not uncommon. It wasn't till later that official fish and game officers were appointed to towns to actually enforce these laws (NH Fish).

No action in fishery conservation was taken until 1866 where there was a restoration project in the Merrimack and Connecticut rivers. In 1865 the commission of fisheries was created and in 1880 reorganized as the Commission of Fish and Game. This is when they were given the authority to enforce fish and game laws through locally picked wardens. Every town was mandated to hire their own game warden or face a 50 dollar fine. In 1890, the first Fish and Game Detective was appointed. These early "detectives" were hired to prevent hunting of deer in crusty snow. By 1915 there were 7 state game wardens. In 1883 there was 169 wardens elected. At this time, game was at an all time low. The passing of the migratory bird act in 1918 helped the birds recover but overhunting was all to prevalent resulting in the shutdown of hunting all together in some counties of the state (NHFish).

New Hampshire fish and game wardens didn't really have much of a stance before 1926. In that year they finally got uniforms and state vehicles and boats which greatly improved their efficiency. Also during this year the force was nearly doubled. By 1935 these wardens were officially called conservation officers and worked under New Hampshire Fish and game Department. In 35 there were 26 CO's and that number would fluctuate between 25 and 50 for almost 7 decades (NH Fish). In 1964 CO's began converting to all state owned vehicles. In 1976 a military ranking system was enacted in the law enforcement division. Currently as of 2010 there are 43 CO's currently employed by the New Hampshire Fish and Game Department.

Like most agencies throughout the country, if not all, New Hampshire law enforcement officers of any kind need to go through a 14 week general academy. The applicant must attend this school within 6 months of being hired. Unlike Maine, applicants must be already hired with their planned-on-entering agency as no walk ins are welcome in New Hampshire. However it is set up similar to Maine in that it is very militaristic with revile at 5:30 and lights out at 9:30. In order to get into the academy the applicant must also have a high school diploma, no serious motor vehicle record, pass a background check, pass a psychological exam and medical exam, pass the pt test (including bench press) to the 35th percentile, and meet the visual standards. (Licensed)

Each town of city or department has its own mission statement but a general statement that could more or less be attributed to the whole fish and game department is expressed on eregulations.com and that is as follows: "As the guardian of the state's fish, wildlife and marine resources, the New Hampshire Fish and Game Department works in partnership with the public to: Conserve, manage, and protect these resources and their habitats; Inform and educate the public about these resources; and provide the public with opportunities to use and appreciate these resources" (Eregulations). New Hampshire Fish and Game is also home to many specialty teams just like Maine. New Hampshire has a K-9 team unique to the conservation law enforcement. Although there are only two dogs on the team, they are collectively certified in tracking, evidence detection, search and rescue, and wildlife detection. Conservation officers and their canines are trained through United States Police Canine Association (USPCA for short) (NH Fish).

The New Hampshire Fish and Game Department also has a dive team. This team is part of the search and rescue division. The team has a decently long history. It started in the 1960's as CO James Clark with the help of New Hampshire's Fish and Game Department, established the dive team. As of right now there are 14 diver are part of the team with their own special training on top of the basic academy training. The mission of the dive team is to recover drowning victims in all waterways of the state. The team also assists in the recovery of evidence for local, state, and federal levels. Recent upgrades of equipment have really helped expand the team's efficiency. In 2004 the team acquired a remotely operated vehicle, ROV, which assists in the collection of evidence and helps find bodies without putting people in harms way (NH Fish)

One last thing that ill touch on is the use of Operation Game Thief in New Hampshire. This is a toll free call line designed to catch fish and game violations when CO's aren't around or available. Normal law abiding citizens can call this call line to report any illegal activity regarding game if they witness it and can do this anonymously (Not known to the criminal or public). The best thing is that if this information leaded to a conviction, a cash prize is awarded to the person. This gives incentive to turn in the bad guys and therefore make a more regulated thriving environment (NH Fish).

The Conservation Law of New Hampshire. (2021, Oct 31). Retrieved from http://envrexperts.com/free-essays/essay-about-conservation-law-new-hampshire 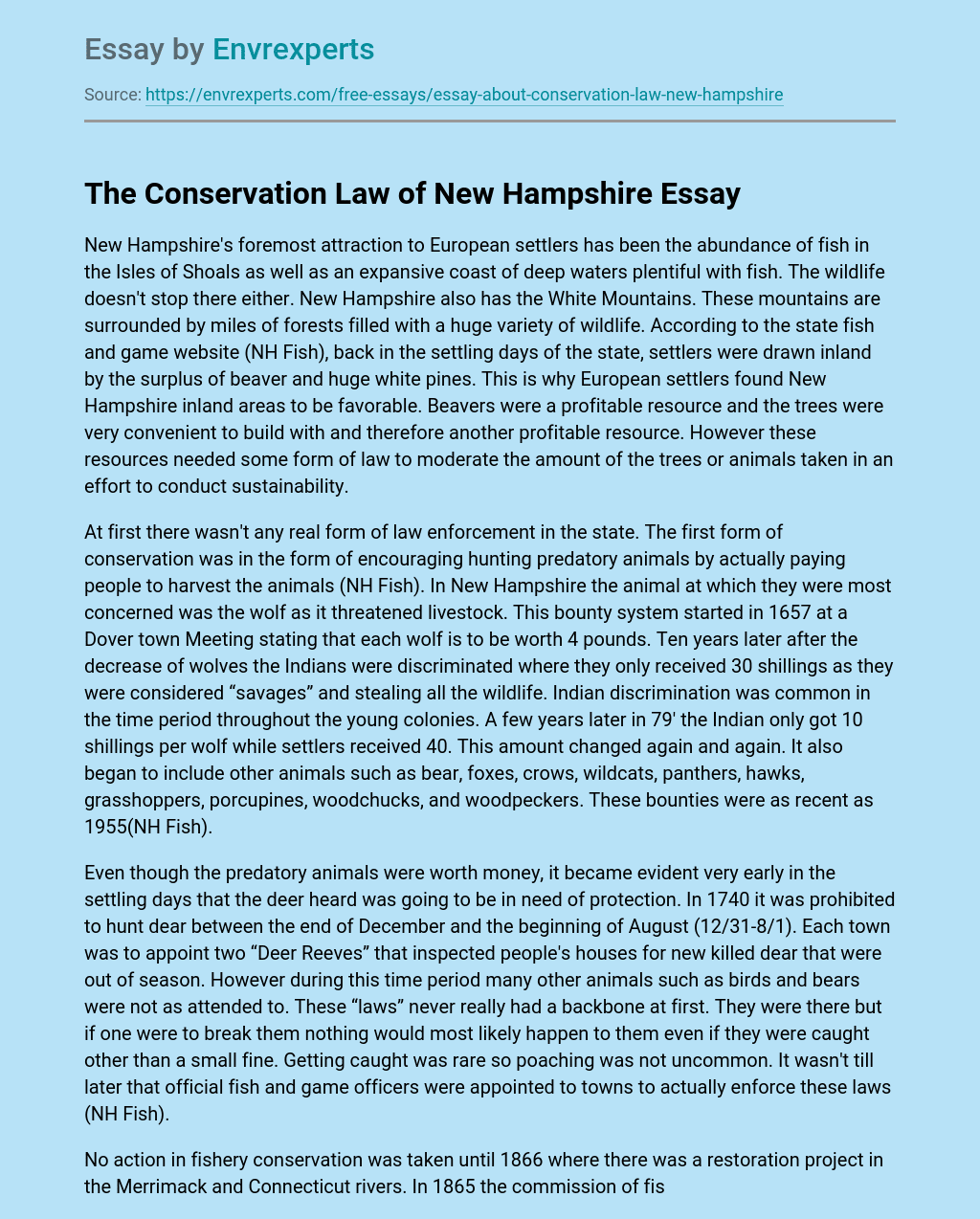