A half-dozen conservation organizations today plan to file a petition under a little-known state law seeking to have Cook Inlet beluga whales Conservation groups filed a request to have the whales listed as a federal endangered species this spring. The National Marine Fisheries Service has until next spring to make a decision on that request, but representatives for the groups said they decided to seek a state designation under Alaska's Endangered Species law to add another layer Jack Sterne, an attorney for the environmental law firm Trustees for Alaska, said state Fish and Game Commissioner Frank Rue will have 30 days to either reject the petition or schedule hearings on the request.

Don’t waste time
Get a verified writer to help you with Conservation Organisations Today
Hire writer
$35.80 for a 2-page paper

The federal process takes more time and is more cumbersome.

A handful of animals and birds have been designated endangered under the state statute after making the federal list. Sterne said this may be the first time anyone has petitioned the state to list a species that has not already been so designated by the federal government.

Biologists say Cook Inlet belugas are a distinct population and their numbers have plummeted from an estimated 650 in 1994 to about 350 last summer. Federal biologists are still analyzing population surveys taken Increased harvest by Native hunters is believed to have caused the decline, but Kris Balliet, Alaska director of the Center for Marine Conservation, said other human activity in and around the Inlet may hamper the whales' ability to recover.

Noise and discharges from oil and gas platforms, competition from commercial fishermen for food sources like hooligan and salmon, pollution from Anchorage's water and wastewater treatment plant, urban and industrial runoff, and increased vessel traffic through the Inlet all could be working against the whales, even if they are not a primary cause of their "There's been an awful lot of attention on the hunting of the whales,"Balliet said. "Overhunting did contribute to this animal's precipitous decline. But we have moved beyond the place of looking at what brought us here, and to look not only to their recovery but their ability to survive Having the whales designated endangered under the state law would allow Rue to designate all of Cook Inlet a "critical habitat" and restrict human activities that degrade habitat or impede the recovery of the belugas, Sterne said. Balliet said the part of Cook Inlet used by the whales is largely in state waters, which extend three miles out from the Southcentral business and industry groups opposed the request for a federal endangered species designation for the whales and may oppose Ken Freeman, executive director of the Resource Development Council for Alaska, said it's a mistake to focus on development activities that aren't related to the population decline, instead of working to forge a co-management agreement between Native hunters and NMFS.

Freeman said he had not seen the petition. "One thing we all agree about is we want to see the population recover," he said. "We would much prefer that our energy and focus was on creating the ability to manage the harvest. That's where the problem lies."

Concern about the whales caused a state judge to remove five tracts from an oil and gas lease sale in Cook Inlet last spring, and a channel dredging project near Anchorage was cleared only after the U.S. Army Corps of Engineers reached a monitoring agreement with environmental groups, including some of those who are now petitioning the state. Hunting of Cook Inlet belugas was prohibited last summer, and Native hunters are negotiating with NMFS to complete a co-management agreement that would limit annual harvests before hunting resumes.

The petition was flown to Juneau on Monday night and should reach Rue's desk today, Sterne and Balliet said. Other petitioners include the Alaska Center for the Environment, Alaska Community Action on Toxics, Alaska Wildlife Alliance, the National Audubon Society and the Center. 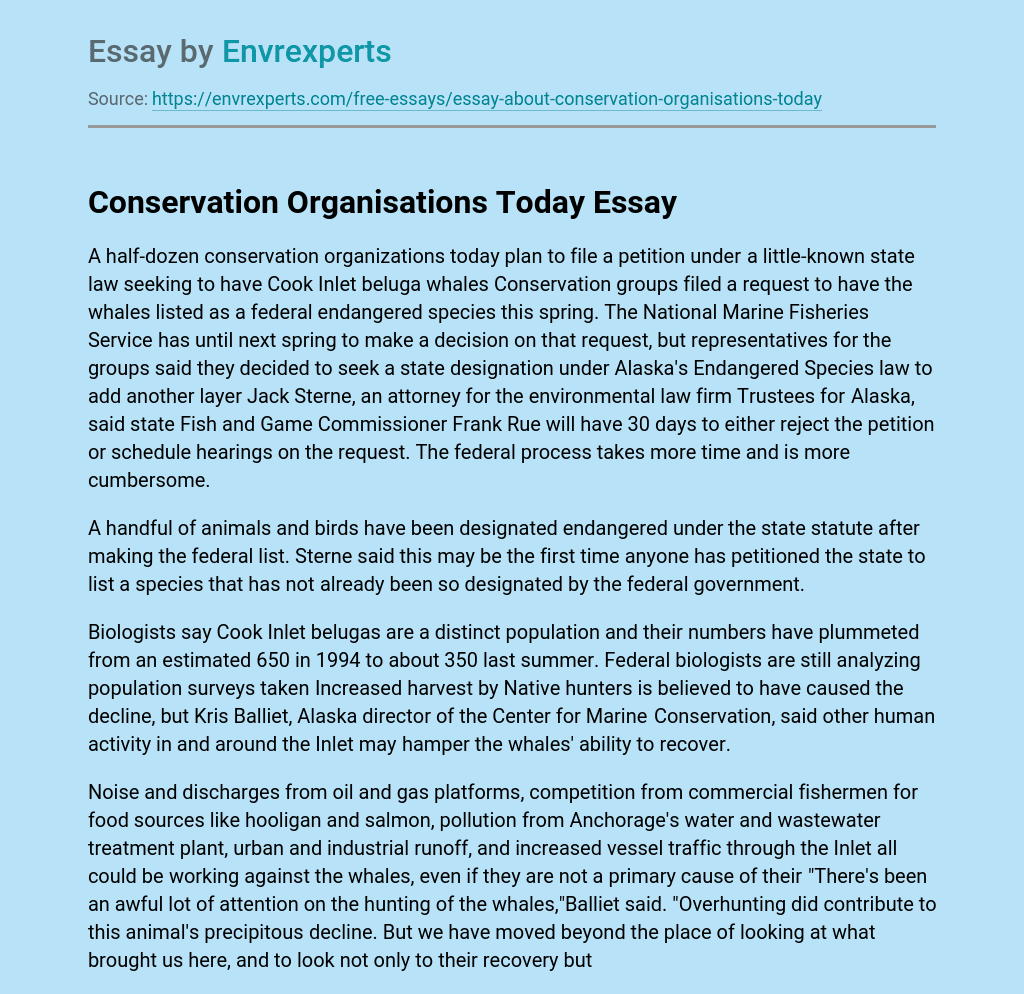