The Controversy of a Foreign Entity

As the population of increases, so does the demand for food and crops that can be allocated equally and adequately among the various citizens in its population. As time has progressed, it has become increasingly imperative that the food shortage that many around the world face be addressed immediately. This fact alone has led many farmers to rely on the aid of genetically modified organisms, or as they are more commonly known, GMOs. Genetically modified organisms are organisms in which their DNA has been genetically altered to either become resistant to certain pesticides or to become predator to other harmful insects that may be deemed to interfere with a farmer’s ability to produce an adequate amount of quality crops.

Don’t waste time
Get a verified writer to help you with The Controversy of a Foreign Entity
Hire writer
$35.80 for a 2-page paper

Once the GMO has been genetically modified, their mutated gene is then passed down through its genetically similar counterparts in order to further their resistance from a certain pesticide or other harmful agents, especially in plants. Genetically modified organisms pose both significant risks and potential benefits to the consumer’s health and overall societal well-being in terms of everyone having access to frequently sought-after nutritional resources and the benefits they offer in terms of aiding the population that consumes them.

Genetically modified organisms can help because they aid farmers in growing a larger quantity of crops with fewer resources and are even used to help treat certain diseases such as diabetes.

However, GMOs are also known to damage certain aspects of the agricultural sphere such as crops by introducing fatal pesticides that the genetically modified crops become immune to, which also poses the question to many as whether or not GMOs are just as harmful if not more, to those that ingest these genetically mutated crops.

Genetically modified organisms should not be allowed to be sold in the United States because they can have unforeseen consequences on the organisms that ingest them, have caused many people who ingest them over an elongated period to have various health problems, and they also require more pesticides that hurt crops vital to the production of food in the U.S.

Although the controversy surrounding genetic organisms has been up for debate ever since its inception, in the early 90s, there have been some positive reinforcing areas that make it up for debate. Genetically modified organisms have been used beneficially in many instances such as with farming and crops. Many farmers’ crops are susceptible to damage from other aggressive crop-eating pesticides and insecticides such as rodents, fungi, and other bacteria. These aggressive organisms can affect crops in multiple ways by feasting directly on the food themselves, causing the crop to deteriorate immensely. They can also affect crops in other ways indirectly by injecting the crop with a bacterial or other harmful viral function which can cause the crop to deteriorate from the inside out, which could make it incapable of producing food in the future. This could result in a shortage of a particular crop if it is not controlled by biological means such as “introducing pest strains that carry lethal genes… developing new kinds of insecticide based on modifications of insects’ growth hormones” (Wigglesworth, 2019). This in turn can cause the opposite effect of what scientist intended for the genetically modified organisms to originally do.

Genetically modified organisms can also cause harm to the environment because of their ability to mutate an organism’s genes so much that they produce undesired results that may not be discovered until after a heighted length of time. While GMOs can protect crops from certain pesticides, it can also cause those very pesticides by either deterring the pesticide away from the crop or causing the pesticide to die completely. According to Dr. Christain Krupke, scientist have found multiple ways to expose harmful pesticides to certain chemicals so that they do not attack vital crops stating, “carefully selected protein is one that is toxic to certain insects” (Krupke, 2019). This shows that while GMOs may protect the plant initially, it can lead to the plants’ ultimate demise in the end because the very pesticides that it wards away initially, may develop an immunity to the GMO which can lead scientist to come up with a GMO that may protect the plant from pesticides but also damage the crop because of the powerful chemicals that were used to ward of the harmful organisms.

Genetically modified organisms are harmful because they can have unforeseen consequences on the organisms that ingest them. According to Meghan L. Norris, gmos have been tested by several different scientists in order to test how toxic they are once they are genetically modified. “Allowing them to conclude that genetically modified DNA did not cause increased mutations in consumers” (Norris, 2017). This shows that although GMOs have not currently been thought to be dangerous after at least twenty years of research, there is no guarantee the future of GMOs won’t be more pervasive. As it currently stands, there are an increasingly prevalent number of GMOs that have been introduced to the market as time goes on. Because of the lax requirements to list all the GMOs that are present in food, many consumers do not know exactly what type of food they are consuming and how it may affect them. These studies were the result of GMO test that consumers have been known to ingest. Part of the innate controversy that makes GMOs so lethal is that consumers do not know how many other GMOs have remained unaccounted for and how they can affect them. Further studies have shown that they also lead to compromising many mammals’ immune systems and nervous systems by shrinking the brain size of several animals. Although GMOs have not been directly linked to be the sole cause of health problems for those who ingest them, they have been noticed to have long term effects on the body that can lead to things such as heart problems and kidney problems. Because GMOs have been cause for concern, others have found another way to genetically engineer food to meet the growing demand for food consumption while using a process that although it is more time consuming, may potentially yield better results for the overall health of society in the long term. This leads to the idea that gene editing, where some many scientist have used CRISPR to edit out a crops gene that negatively affects production, which then produces crops that do not have the faulty gene that made the crops previously susceptible to damage from certain pesticides.

Through further studies, GMOs have caused many people who ingest them over an elongated period to have various health problems, which has forced certain organizations such as the FDA to take action to ensure that the consumers of these products have a more in depth look at the chemicals that are used to produce their food. Because the effects of GMOs have not all been discovered yet, the FDA has notified all producers of food products that they are to notify their consumers about whether the products they are consuming has been genetically modified, as form of transparency to the customers. The producers of these genetically modified foods are required to notify the consumers about whether there are GMOs in their food, not what kind of GMOs there are their food. Since that is the case, how is it possible for consumers to truly know what they are ingesting and how those GMOs affect them or their loved ones. This shows that the FDA is not actively practicing transparency in this instance, but rather lack thereof, and has only contributed to the falsified ideals that the safety and protection of their consumers has been taken into utmost consideration. GMOs have been used to produce for good things for their consumers like pivotal advancements in medicines such as genetically modified insulin for those who have been diagnosed with diabetes. But this also raises the question about whether the same GMOs that have been used to fight off certain diseases should be used to produce products that are going to be ingested by consumers with various health problems and genetic makeups. Not all consumers are the same, and therefore genetically modifying their foods can have other disastrous consequences on the organisms that ingest them.

GMOs have been known to create more pesticides. While studies have shown that GMOs have initially begun to help fend of certain harmful pesticides to protect crops, studies have shown that certain pesticides have developed an immunity to the GMOs that were previously used to protect the crops. In some ways the chemicals that were used to fend off the pesticides were more harmful than the pesticides themselves because the GMO would kill off the pesticides that would harm the crops but also deter other organisms that helped with the natural production of the plant. This also does more harm to the environment than was initially perceived when GMOs first became prevalent. The GMOs caused certain pesticides to develop an immunity to the GMOs that has not been introduced to nature before, which has led to some of those same pesticides harming more crops that they may not have had any aversion to.
Based on the information above, it can be concluded that GMOs pose both a risk and a great benefit to society in terms of how it will affect the agriculture surrounding and the organisms that consume it. Although there are no current findings of certain GMOs being harmful to humans, it is also known that not all both the negative and positive aspects of GMOs have been revealed. This has left many questions about the nature of GMOs from both an ecological and societal standpoint, and how they affect the society around them unanswered. This may also lead others to believe that the true effects of GMOs, both positive and negative, are yet to be revealed. The controversy surrounding GMOs is a topic of much needed discussion and full of unknown consequences.

The Controversy of a Foreign Entity. (2021, Oct 31). Retrieved from http://envrexperts.com/free-essays/essay-about-controversy-foreign-entity 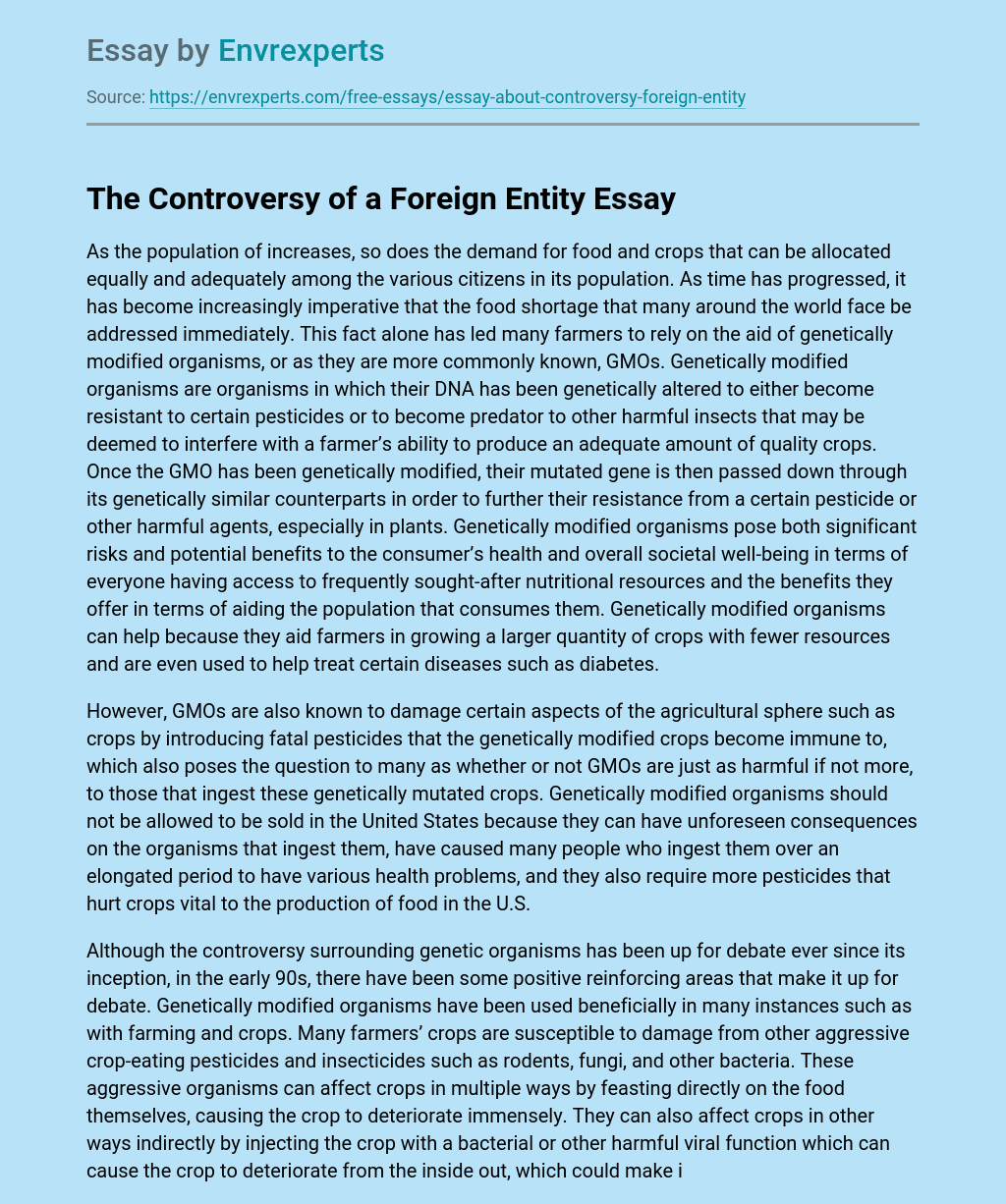