Generally, adopting ethical behavior and engaging in corporate social responsibility can significant steps towards the success of the business. In addition to making profits, organizations have other duties in society and to act ethically right (Nicolaides 2017). However, while businesses are trying to achieve these roles, unethical issues always arise, which can destroy shareholders and company reputation, decreases the share value in the market, and other negative impacts for the customers.

In an organization context, social responsibility is a concept that depicts a business has to undertake its civic duty, which aims to benefit all members of the community (Orr and Davis 2020).

Don’t waste time
Get a verified writer to help you with Corporate Social Responsibility
Hire writer
$35.80 for a 2-page paper

A company is described to accomplish social responsibility if there is a balance between social welfare, environment, and economic growth.

While in the last two years, Facebook has engaged in various ethical issues violating the principles of UN sustainability and development. Facebook is among the most essential international social media and technology corporations. Today, it has been considered the most popular website for social networking, with over 900 million users in the world monthly.

With the vastly growing number of users, the company is expected to hold a high level of ethics to ensure people interact, chat and have fun without breaching to other people's privacy and other problems such as cyber-bullying (Gardiner 2018).

However, in the effort to fulfill these duties, ethical concern rises and they have to establish ways of dealing with every issue. In 2018, the New York Times and Guardian reported a substantial report about ten organizations that had been involved in unethical acts during the year, and Facebook was on the list.

In March 2018, The New York Times reported that Facebook experienced a substantial scandal when it was reported that (Cambridge Analytica) a political data company gained access to the private data of more than 50 million of Facebook users without their consent.

The situation was considered unethical because they are responsible for protecting the user's information from any third party (The Sydney Morning Herald 2018). The scandal was deemed to be real because the Facebook Version was found to allow people to access primary information of their friends, including names, location, birth dates, and profile pictures, as well.

According to the report interpretation, the data was processed accessed by Cambridge Analytica to create significant ads that encouraged and attract the users to vote for Trump. Generally, most organizations undertake various corporate social responsibilities to ensure they remain ethical in all their activities. Therefore, understanding the theoretical aspects of ethics will help the organization to conduct its operations and make its decisions more appropriate.

An organization can make decisions using the utilitarianism approach. In this case, a decision is made if the outcome will benefit the largest population. In the Facebook case, they did not utilize this theory because the outcome of the action did not yield a more significant benefit for the larger society, considering people's data were leaked (Schwartz 2016).

The utilitarianism approach is regarded as a substantial example of a consequentialist ethic, where the consequences of an action justify the rightness or wrongness of the action. Besides, deontological ethics is also used to ensure the organization undertakes its social responsibility effectively. The approach believes that various obligations and rights exist, band, an action is considered moral if it honors those obligations. Allowing Cambridge Analytica to access people's information on the website violated the deontological approach because the action did not honor the rights and privacy of the customers.

According to this theory, the consequences of the act are not an essential factor. In an organization context, culture is depicted as a common way of behaving and doing things and is based on shared values, standards, and principles. Every organization has distinct standards on how individuals should interact and behave while working together in a corporate environment (Moldenhauer and Venables 2018).

Cultural dimensions can affect how an organization can deal with various ethical issues. For instance, to deal with the issue of privacy, Facebook should establish a culture where breaching other people's privacy without concept can lead to legal consequences. The UN Global Compact provides ten substantial principles that should be adopted by businesses to ensure customers are served in human ways, and their rights are protected. In the Facebook case, they are believed to violate the first principle by not offering protection to their global customers for not protecting their data from Cambridge Analytica (Fussler and Van der Vegt, 2017).

Respecting the rights to people's privacy considered a vital way to ensure Facebook support its relationship with its customers. The organization has its well-developed code of conduct that is concerned with the protection of user\'s data (Facebook – Corporate governance). The third-party is allowed to access the primary data of Facebook users, but is expected to handle it with extreme sensitivity.

Exposing people's information can lead to negative impacts for the company, and therefore users are supposed to read the policy guideline provided by Facebook concerning data access. However, many believe that the policy guideline is not enough in addressing ethical scenarios concerning privacy issues. Technology is advancing daily, and other people are coming up with new approaches that can help them access users' information. Therefore, better recommendations should be adopted by the company to ensure ethical concerns do not recur in the future, and to protect their reputation, as well (Amis 2017).

The organization should implement stricter guidelines both for individuals and companies users to ensure people who violate privacy guidelines are liable for the act. Besides, civic education should be offered on the website to ensure they are aware with the information they should share and the content they should not (Arredondo 2017).

This education should include how to report issues of privacy violations and the consequences that one will be subjected to. In addition to civic education, the Facebook should install a software on the website to detect cases of privacy breaching. This will help in identifying the issue at the early stages and preventing any negative potential consequences. In conclusion, undertaking ethical and social responsibilities is considered significant for organizational success.

Although the main role of the business is making profits and maximizing shareholders' wealth, conducting activities that increase the wellbeing of the whole society helps the company to reach higher success. Nevertheless, ethical issues always arise in the process.

For instance, Facebook was reported in 2018 to allow the Cambridge Analytica to access users' data, which led to the violation of the UN Global Compact principle. However, making stricter guidelines and developing software to detect data privacy issues will help them avoid such problems in the future. 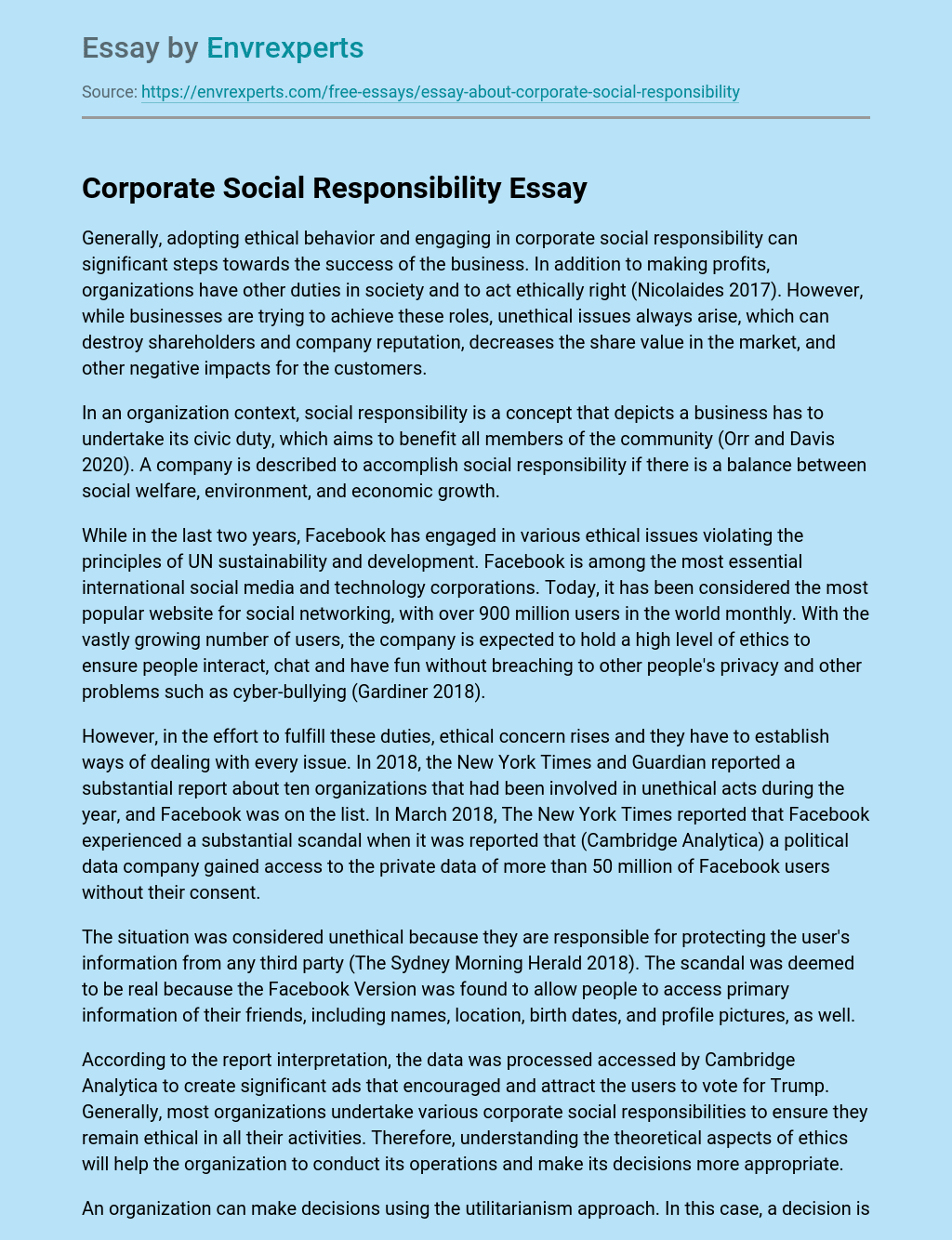