Cost of Power in the United States

“As human beings, we are vulnerable to confusing the unprecedented with the improbable. In our everyday experience, if something has never happened before, we are generally safe in assuming it is not going to happen in the future, but the exceptions can kill you and climate change is one of those exceptions.”l Everyday there is something new that ravages our planet beyond what was believed fathomable. The proportions of destruction have gotten larger.

Don’t waste time
Get a verified writer to help you with Cost of Power in the United States
Hire writer
$35.80 for a 2-page paper

The largest recorded storm in the history of our planet swept across the Philippines in early November killing 6,000 people and uprooting the infrastructure of the entire country. Last year the largest ever recorded Hurricane from the atlantic ocean, Hurricane Sandy, hit the east coast, causing 68 billion dollars in damage, killing 268 people and destroying the Atlantic City Boardwalk.

However, destruction is kept at a distance and technology seemingly creates an illusion of disconnect that allows us to separate ourselves from tragedy.

Mainstream media controls the national agenda and after it has leeched a problem for all the news it can, it moves on to the next. It seems so obvious that Climate Change is a problem but it also is apparent that the destructive path of global warming is barely being slowed down. Global carbon dioxide emissions hit 36 billion tons in 2013 an unprecedented high, showing that current methods of reigning in greenhouse gases arent working.? Solar panels, wind turbines, and hydroelectric dams are all the modern creations of renewable energy.

However after years of use their inability to il fuels is becoming increasingly apparent. It is because of this that CO2 emissions have continued to steadily increase. Climate change is the greatest problem that we will face for the rest of the 21st century and the only thing that will slow down an increasingly aggressive climate is an energy revolution.

The main factors that contribute to climate change are the ineffectiveness of modern renewable energy as well as the large dependency on fossil fuels. The core of the problem is that many people have dismissed the energy crisis with the advent of increasingly less expensive solar panels, more durable and larger wind turbines, as well as the recent mass production of electric cars. But each of these systems of clean energy comes with a cost, not only are they expensive but they are fallaciously “green” as well. Solar panels are becoming cheaper and cheaper by the day, which is important for a lot of americans. But regardless of their falling costs their dent in energy consumption is incredibly small. In an article written by Gail Tverberg of

The Energy Collective, she highlights the solar panels' inability to fully take over in the production of energy that fossil fuels currently occupy. Currently solar, wind, and geothermal sources of green energy produce 1.6% of the worlds energy. That statistic does not include hydro electric power, which produces 6.4% of the worlds energy and since 2003 has virtually stopped growing. The reasons for the lack of growth as well as size of energy production? With each of these it is different. Solar power, while it is becoming more accessible still can only work properly in perfect conditions. If you've ever been to Seattle you would understand that not all places in this world are bright and sunny. On average Seattle Residents get to see about 58 days of sun a year. Now while not every city is as gray as Seattle it shows an obvious exception for how solar panels cannot be universally installed. Now why have hydroelectric dams seized construction? Its because hydroelectric dams can only be built in a very small number of places where their power can be utilized. Most environmental scientist consider the 6.4% of energy that is supplied by these dams to be the plateau of energy they will produce, because construction costs are high and proper placement of these dams is even harder to come by. So while these sources of power do their jobs it simply isn't effective enough.

They all rely on specific conditions of the world that we cannot control. With that being said the apex of their energy is not controllable which is why using solely these methods is futile. Now while these methods are not used for locomotion it seems that the increased production of electric cars is the automobile industries response to environmentalism. However, researcher Ozzie Zehner, a visiting scholar at University of California Berkeley, says “Upon closer consideration, moving from petroleum fueled vehicles to electric cars starts to appear tantamount to shifting from one brand of cigarettes to another.”6 He draws this conclusion because the construction of the batteries for these vehicles, as well as the other processes are more destructive to the environment than anything else. So while electric cars do not create the same amount of greenhouse gases during their running, the production of these cars is far worse.

Cost of Power in the United States. (2021, Oct 31). Retrieved from http://envrexperts.com/free-essays/essay-about-cost-power-united-states 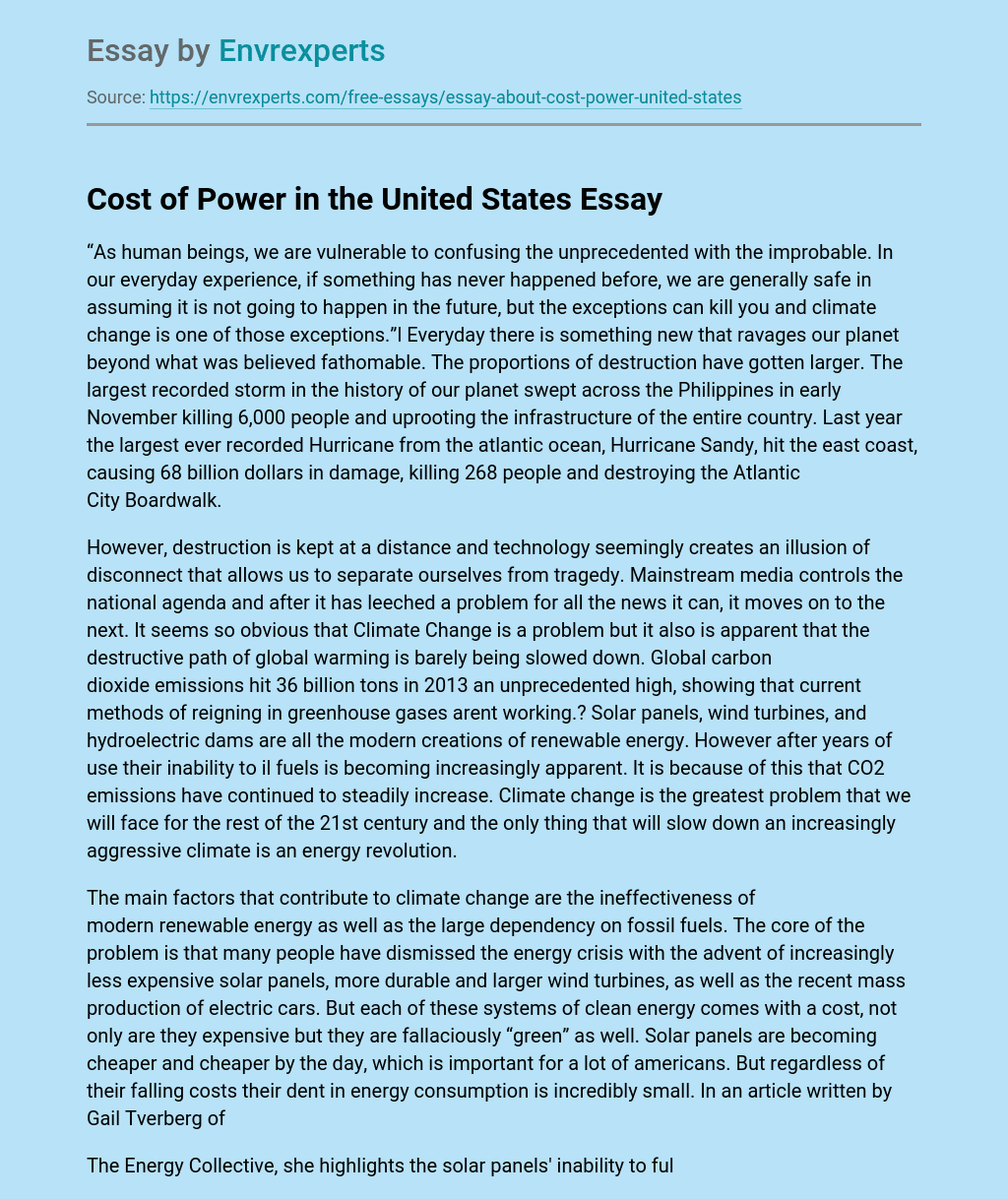